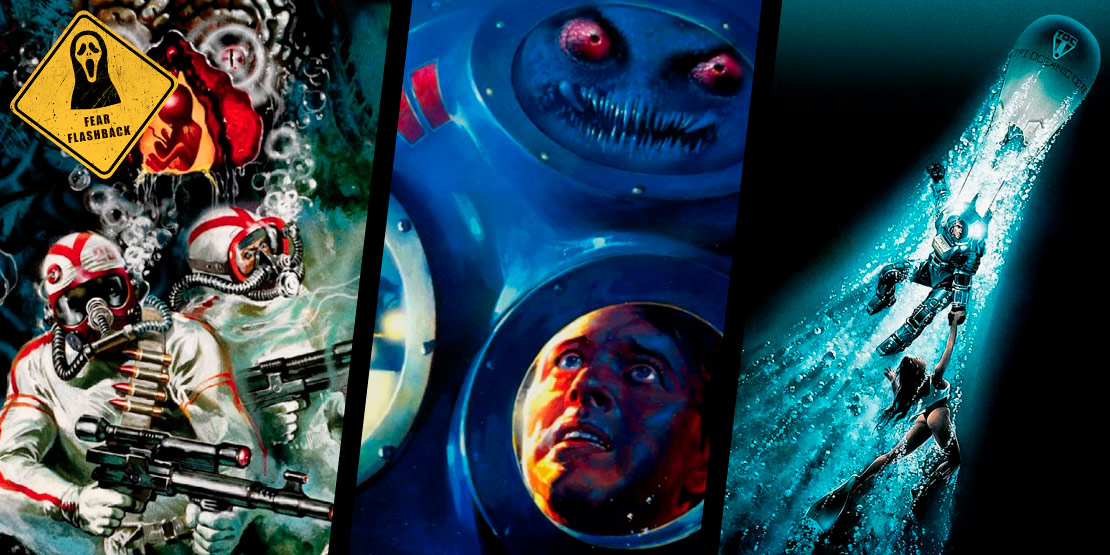 This was a bit of a Creature Feature week – actually the last few have been. Anaconda, Crawl, Lake Placid, Kingdom of the Spiders and more have made their way across our screen. (My sister-in-law is all in, my wife is less so.) I’ll probably do a ‘killer croc’ double or triple feature at some point, but this week is all about the sub-surface creepy crawlies. Mostly inspired by BB_Ben, who watched these (and a few more) a couple of weeks ago.

I didn’t include The Abyss in my watch because it’s not really a creature feature – it’s more a straight-up sci-fi flick. It’s also a little too good – I like my creature features with a little grime on ‘em.

Let’s jump in. I’ve sorted them by increasing level of quality – in my opinion, of course.

The Mediums
All three of these movies are available streaming for subs on Amazon Prime. I actually have a Blu-ray of Leviathan from Scream Factory. It’s perfectly serviceable and has a small handful of extras. I kinda wish Deepstar Six had a Blu-ray release, I’d probably pick it up.

The Rift
The Rift is way too serious for such a crappy, low-budget affair. In some ways it’s more a thriller than a horror movie, but there are monsters involved so I’ll let it slide. 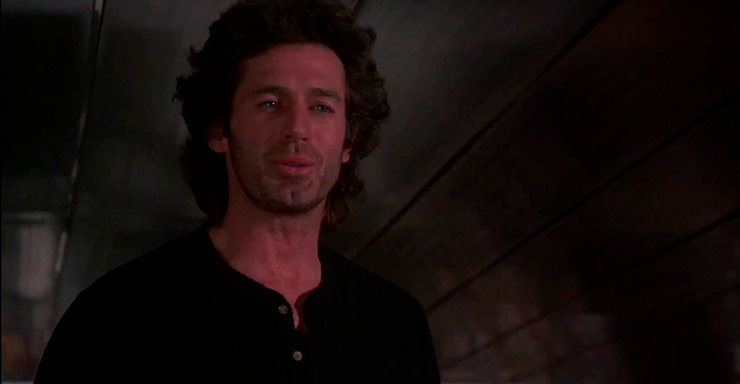 The Rift is the story of a scientist and his hair, assigned to the high-tech submarine (The Siren II) he designed to help track down what happened to the other high-tech submarine he designed (the Siren I, natch). All the corporate guys he meets seem to be made of plastic. At least the sub is full of real people – jerks, mostly, but real people. Including recognizable actors! Holy crap, that’s R. Lee Ermey with black hair. And Ray Wise!

Anyway, the Siren II finally finds the signal from the black box of the missing sub. It’s deep within a rift and the Siren II starts to descend to unreasonable depths. It’s okay, though – there’s not even a hint of scientific accuracy in this move. People move in and out of the submarine and into air-filled caverns or the water with nary a nod to pressure. It all might as well be taking place in the shallows. I think they do mention the depth a couple of times, but don’t worry – that brief moment of concern will pass. 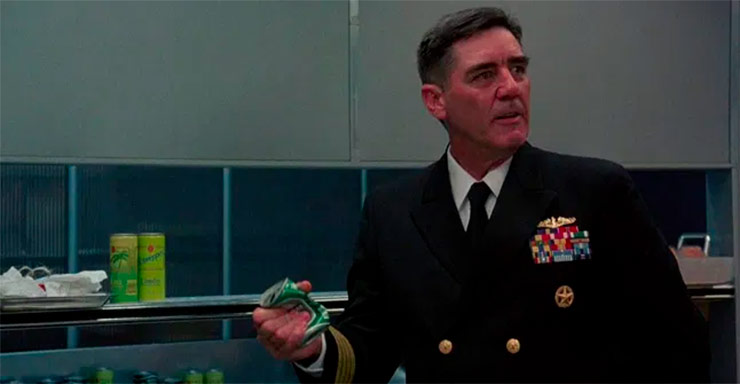 If Deepstar Six is a B movie then The Rift is several letters further down in the alphabet. It could almost pass for an exploitation movie, except there are some decent actors (with some terrible lines they have to say) and some monster effects that are better than expected. It takes a long time for the monsters to show up, but when they do there’s a wide variety of them. There’s a creeping seaweed, some bug-like creepy-crawlies, fanged fish, mutated humans and a huge monstrosity that looks like a poor man’s vision of something from an HP Lovecraft story.

The Rift rips off a lot of movies – The Thing, The Abyss, Alien, Aliens, Terminator – hell, they even seem to rip off “The Lonesome Death of Jordy Verrill” from Creepshow. I can’t say that do it with panache, but they’re pretty shameless about it, so there’s a refreshing sort of honesty. It feels like a movie made by people who really love monster movies, military thrillers and corporate espionage flicks and decided to make a mashup of all of them – without really learning how to make them fit. 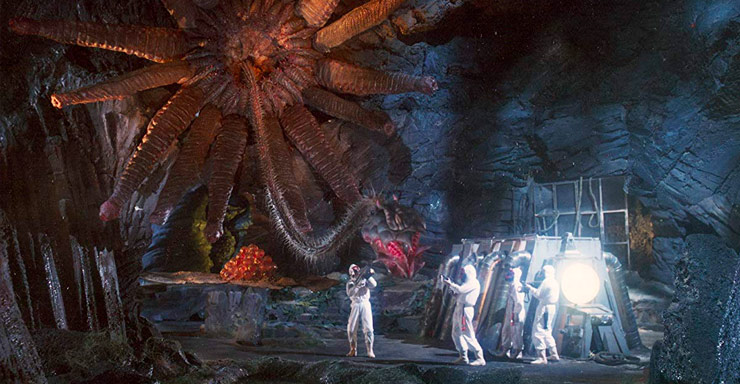 This is a terrible movie, but I can’t say I didn’t have a good time. There’s a sense that these folks did their best with more enthusiasm than talent – but at least it didn’t come off as dry and lifeless as The Rig, for instance. It also gains points for being the only film in the bunch to avoid the ‘stinger’ ending.

Just as an aside, the guy who directed this film also made Slugs. This was a much better film than that one.

Deepstar Six
I’ve always been somewhat unkind to Deepstar Six and it really deserves better. Of the three underwater films that had a US theatrical release in 1989 it was probably the lowest profile – it’s certainly the cheapest. It was, however, the first in release – not that it helped the box office much. 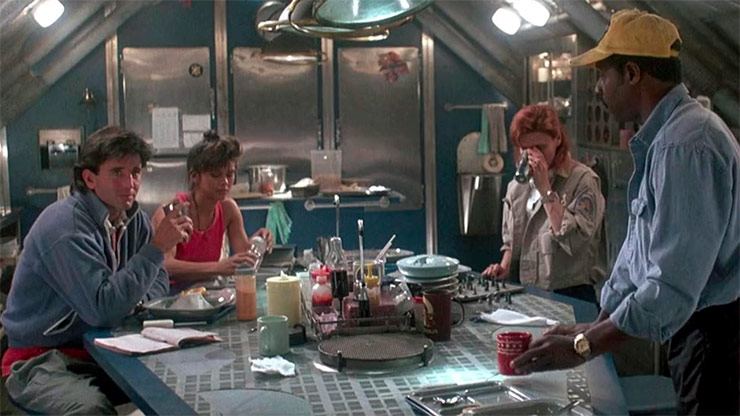 This is a Sean S Cunningham film – the man who created the Friday the 13th franchise – and while that means a shoestring budget it also generally means competent filmmaking and something sorely missing from the other films I watched for this. A sense of fun. It’s a B movie, and it knows it.

Like every other underwater thriller/horror movie that came out in 1989 Deepstar Six sports a diverse crew of scientists and blue collar misfits. Ostensibly a military operation (one of Deepstar’s missions is to set up a missile platform on the ocean floor), there’s really only a nod or two to that premise. Essentially, one guy wears dog tags – that guy is also played by Miguel Ferrer, so you know he’s also a douchebag. I didn’t really recognize anyone else except the Russian guy who was in everything in the 80’s and 90’s when they needed a Russian guy. And Nia Peeples. Who I always thought was related to Mario Van Peebles because I got the p and the b confused. 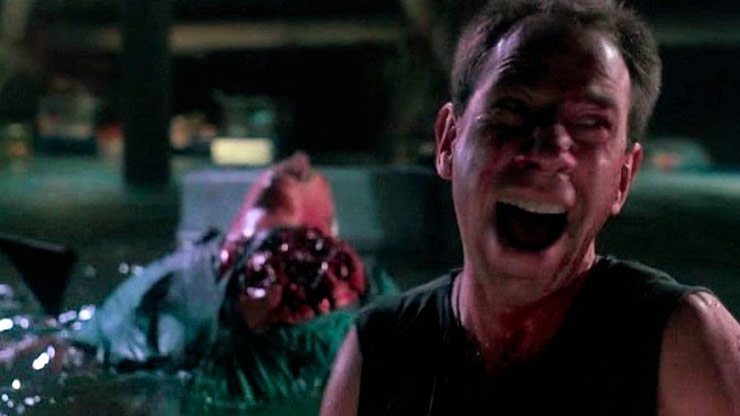 SO! Disparate crew, military support, two days until retirement… er, ’till they can go topside, and of course the Russian guy finds a huge cavern under the location where the nuclear missiles are supposed to go. (A US military project involving nuclear missiles that’s run by a British guy with a Russian guy on staff – the monster is not the most difficult part of this movie to believe, actually.) They decide (well, the British guy decides) to collapse the cavern with explosives so they don’t get behind and shut down. This doesn’t sit well with the geologist (Peeples), but she’s overruled. Should have listened to Nia Peeples, gentlemen – she knows ‘you’re nothin’ but trouble.’

Okay, trying to jam lyrics from “Trouble” into this review was a bad idea.

The explosion releases a large monster that first destroys a submersible, then severely damages the remote research station, leading to the Russian guy getting killed. During the rescue mission the captain is also killed. When the crew decides to shut things down and bug out the designated screw up (Ferrer) manages to detonate the missiles, causing massive damage and setting in motion even worse things.

Which is when the monster shows up and bites a guy in half.

Looking back after watching all three movies I can say that the Deepstar Six monster is my favorite of the bunch. It’s a little stiff, yeah, but it’s an armored arthropod (and looks like one), so I buy it. It’s a much better level of special effects than in The Rift and is just a better design than the deep-sea fish inspired monstrosity of Leviathan.

There’s more monster, bad decisions, sudden-but-inevitable betrayals, explosive decompressions, poor weapon handling and water. Lots of water. The ending is no surprise, but it’s still exciting and satisfying in a cheeseburger and fries sort of way.

Deepstar Six is way more fun than I remember it being. It does the best it can with its limited budget, has a great monster, some bad guys to root against and good guys to root for. If the model sets are a bit cheesy, the blood a little too bright, and nobody wears a bra, well that’s just to be expected in a B movie.

Leviathan
Leviathan is a bit of a lost movie. It doesn’t have the budget or script or actors or director that The Abyss had. Neither does it have the gleeful fun a monster movie should embrace if/when those other elements are unavailable (like Deepstar Six). Don’t get me wrong, I like Leviathan – I actually like it a lot – but it wants to punch at a much heavier weight and fails. And I liked the movies that it’s emulating a lot more. 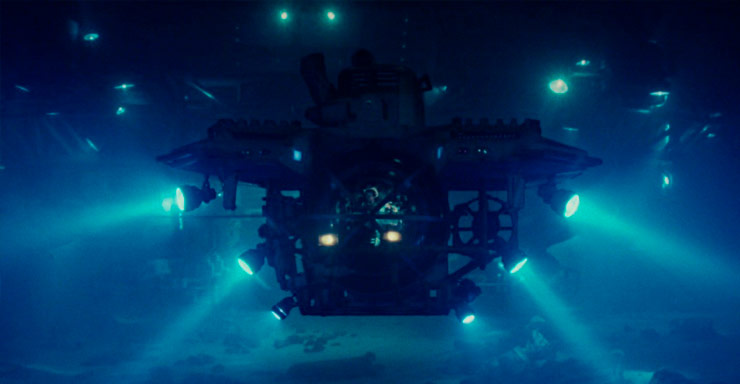 It’s hard to spoil much about Leviathan because you’ve seen it all before. It mines the same depths (sorry) as The Rift – mostly The Thing and Aliens. The monster is even designed by Stan Winston, who did the creature designs for Aliens (amongst many other things). There’s the rough and ready crew who don’t trust their greenhorn captain (Aliens), the creature that infects you, then makes you part of it (The Thing), the ‘arming up’ to defend a small area against the creature (Aliens again), the abandoned foreign location where something awful happened and from which the monster is brought (The Thing – though it’s a Russian freighter, not a Norwegian base). You get the idea. The monster even goes for the blood supply, just like in The Thing.

These sorts of things should annoy me, but for some reason I simply find them familiar and almost comforting while watching Leviathan. Unlike The Rift these elements are handled well and they work together rather than being jammed in because it’s ‘cool.’ And the actors are all professional and (mostly) not painful to watch. Hector Elizondo, Ernie Hudson, Amanda Pays, Richard Crenna, Peter Weller – you get the feeling like the producers on this film thought they were making a bigger, better film than what they ended up with, because those are all fine, professional actors. Hell, even Daniel Stern did a good job – and was substantially less annoying than Miguel Ferrar in the same sort of role in Deepstar Six. 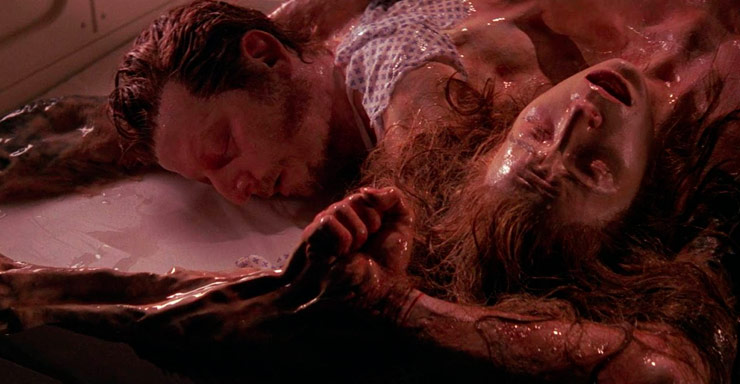 It’s a decent monster movie and has mined the best bits from the movies it steals from. It’s biggest drawback is that the monster is, a bit of a letdown. It’s got a sort of deep-sea fish look to it, but it’s also lumpy and shapeless. It has parts where the faces of crew that have been absorbed are peering out of the mass, asking to be killed – but this has been done better before and since. I will say the line uttered by Weller as he finally dispatches the monster elicits more laughs than cheers – though it’s still a good moment. 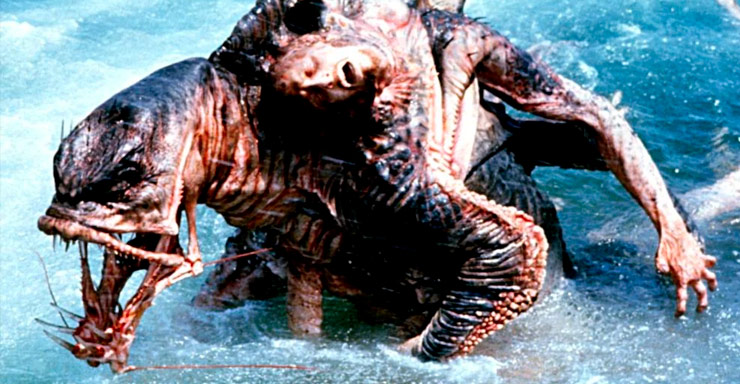 Bottom Line
There’s a likeable cheesiness to Deepstar Six that makes me think I might need to own it now. The Rift is best avoided – though it could be good fun in the right company and does have the most monster variety. Leviathan still holds the top spot in my estimation – at least out of these three. Though how weird is it that Leviathan has a Blu ray release and The Abyss does not?