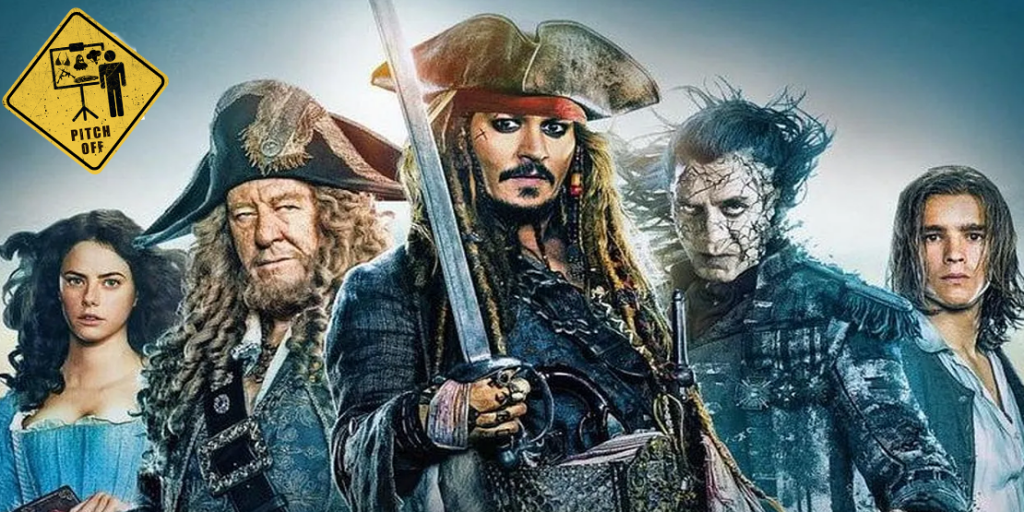 In 2003, Pirates of the Caribbean: The Curse of the Black Pearl, based on the popular Disneyland ride, launched a multi-media franchise that so far consists of five feature-length films and a handful of novels, board games, and toys. A sixth film has been in the works for almost a decade, but it doesn’t look like it will be gracing the big screens anytime soon.

ScreenAge Wasteland knows that if there is one thing fans like to do more than fancast popular characters, it is pitch their own story or film in a franchise. SAW writers Marmaduke Karlston and Jacob Holmes decided to each pitch their own take on a sixth Pirates of the Caribbean film. Below you will find the subtitle, plot, and main cast for each film. After reading both pitches, VOTE on who you think has the better pitch and give it your greenlight!

Scourge of the Seven Seas

The Plot: I’m envisioning this film to be the grand finale of the PotC franchise. Therefore, I’m tying up all the loose ends and dangling threads. I want to try and inject a bit of what made the original three films so much fun. I want to see less CGI and more realism. I want to see breathtaking action scenes and characters double (or triple) crossing each other. My sixth film would pick up from Dead Men Tell No Tale‘s post-credits scene that teased the return of Davy Jones. It would feature Davy Jones teaming up with Angelica (last seen in On Stranger Tides) with a crew that includes Philip Swift & Syrena (also last seen in On Stranger Tides) and Anamaria (last seen in Curse of the Black Pearl). Philip and Syrena would team up with Jones due to a new narrative involving a mermaid trafficking operation. However, in order to evoke some of the original film’s spirit, Jack Sparrow will be downgraded back to a supporting role. In fact, Jack Sparrow is missing and presumed deceased at the start of the film. So when Davy Jones and Angelica begin to scourge the seven seas, the Black Pearl (led by Will and Elizabeth among other fan favorites) will have to find Jack Sparrow as only he knows the whereabouts of an artifact that can stop Jones. All of this will eventually culminate in an epic ship battle reminiscent of At World’s End.

Jack Sparrow and the Shadow Gold

The Plot: The original PotC was terrific, establishing the iconic Jack Sparrow and taking us on a grand adventure. Since then, the series has only become more convoluted and difficult to follow. I propose that the sixth film needs to shake things up by entering the realm of animation and exploring a great adventure with Jack and his Black Pearl crew before the events of the first movie. Animation will allow for creative new adventures without reliance on CGI. The groundwork for this prequel is already laid out in a series of novels called Legends of the Brethren Court. It details Jack’s search for the shadow gold to cure a mysterious illness while the Shadow Lord seeks the same to rule humanity and the East India Trading Company seeks it to end the Brethren Court. This gives us the basic mystical pirate adventure while getting to explore the original Black Pearl crew including Bootstrap Bill Turner and Hector Barbossa as he begins his mutinous plot.

Vote now: which pitch would you want to see the most?

Throw your own Pirates of the Caribbean 6 pitch down in the comments below!