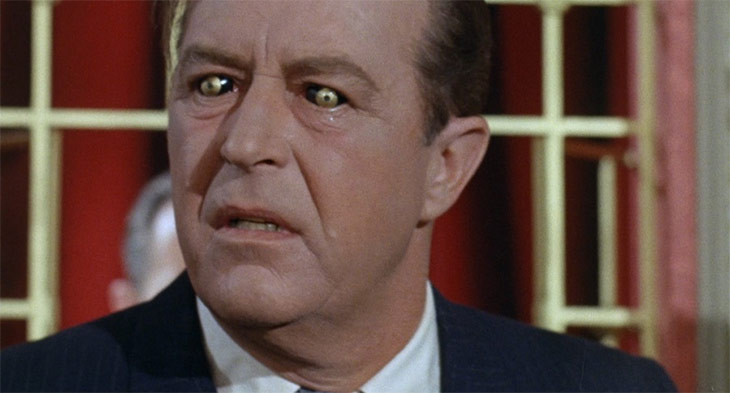 “If thine eye offends thee… pluck it out!”

I first saw this movie only a few years ago, which is sort of mind-boggling. It looks exactly like the sort of flick I would have seen on rainy days at my Gram’s – like Day of the Triffids, Them!, The Incredible Shrinking Man, or Five Million Years to Earth. Even my wife – who watched this with me – said, “Oh, I’ve seen this movie before.” And yet I’d never before come across a copy or a broadcast – and I’ve been looking since the mid 80’s.

See, sometime in the early 80’s Stephen King wrote a book called Danse Macabre, an overview of the Horror genre as he saw it. I DEVOURED that book and I’ve re-read it several times over the years. In the Time Before The Internet there were not a lot of ways for a young man to find info on movies, TV and books about horror. Certainly nothing to be found at my local library. Fangoria was my lifeline, but its breathless fanboy-oriented take on films gave you a lot of info on the effects of, say, a realistic machete to the face – not much in the way of analysis and context. 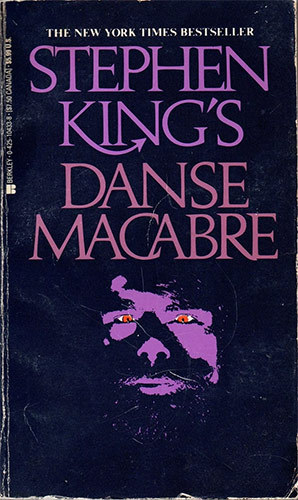 Digression, sorry. The point is, that book gave me 1) an appreciation of the history and context of horror, particularly in its influence and presence in pop-culture, and 2) lists of stories, shows, movies and books that my favorite horror writer (at the time) thought were interesting or important. And man, he liked a lot of the same films I liked!

Some of the films King listed – like Shivers (aka, They Came From Within) have been on my ‘must see’ list for a long time. (I finally got to see that one in 2014.) And yes, to bring it back around, X: The Man With the X-Ray Eyes was one of them. So I’ve been looking for it, on-and-off, for roughly 30 years, and somehow missing it.

The Medium
Kino Lorber put out a Blu-ray in 2015 and it was this that finally allowed me to see X for the first time. It’s a decent transfer, though it maintains a bit of roughness in some scenes. You can also watch it on Amazon Prime if you’re a member as well as on the Roku channel if you don’t mind a commercial here and there.

The Movie
So… this is a Roger Corman film. That might temper expectations, but this was also produced during the height of the Corman Poe film cycle (after The Pit and the Pendulum and The Raven, but before The Haunted Palace and The Masque of the Red Death). The overall quality of filmmaking is pretty high as a result, and the cinematography, acting and effects are top-notch (for the time). And it stars Ray Milland – always a quality choice in a low-budget picture (thanks for classing up Frogs, Ray).

Milland plays Doctor James Xavier, a scientist doing experiments on human perception – eyesight in particular. He’s trying to expand human vision beyond the usual spectrum. “I’m blind to all but a tenth of the universe!” he complains. The foundation funding his research doesn’t see the benefit, however, and cut him off. 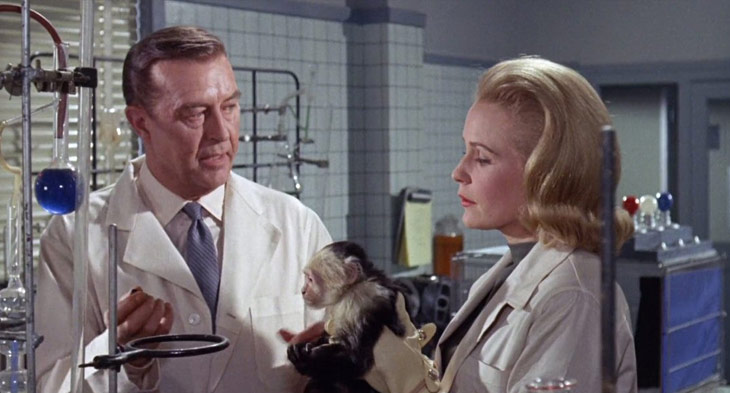 You know how this is going to – this is how a supervillain always gets started. In an effort to prove the board members wrong, Xavier begins to experiment on himself, with initially fantastic results. He can see through skin, paper, walls and – in one hilariously ‘groovy’ party – through clothes. He even saves a young girl’s life during surgery when he is able to see the real problem, rather than the head surgeon’s erroneous diagnosis. This does put his professional life in jeopardy however, and then a tragic accident puts him on the run from the authorities. 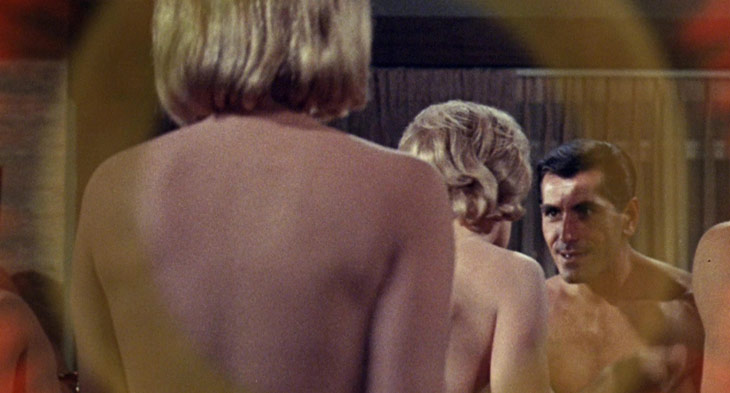 X moves very quickly – there’s little time to ponder larger philosophical questions or emotional impact. It’s not that there aren’t those moments, but they’re few and short. It’s not a bad pace, but the movie is over almost before you start to realize just how horrifying Xavier’s situation really is. 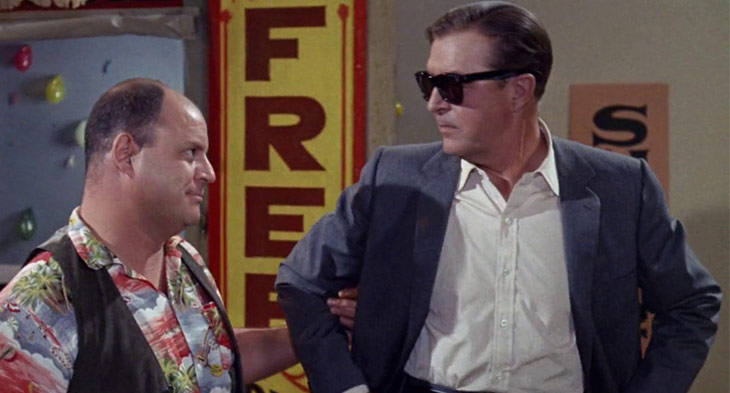 And it’s pretty damn terrible. One character (a particularly subdued and greasily disturbing Don Rickles) opines how, if he had the same power, he’d use it to view “all the naked ladies my poor eyes could stand.” For Xavier, however, that moment – though he enjoys it – is all too fleeting. He quickly moves to a point where he can see through things almost all the time. (There’s a throwaway line where he mentions one of the things he’d like most is “the ability to open my eyes.” It’s not really followed up on, but the implication is that he’s got his eyelids shut – but can still see through them.)

What he needs most is to be able to do more research, to figure out how to fix what’s happening to him. Unfortunately, he has to keep dosing himself with the drug in order to make the money he needs to do that research. After a brief stint at a carnival (as a ‘mind-reader’) he begins working as a ‘healer’ – all he really does is look through a person and diagnose their ailments. None of this lasts long – after a certain point he can no longer even see people AS people – he sees their skeletons, their organs, their diseases. When a colleague finally finds him he doesn’t even recognize her. 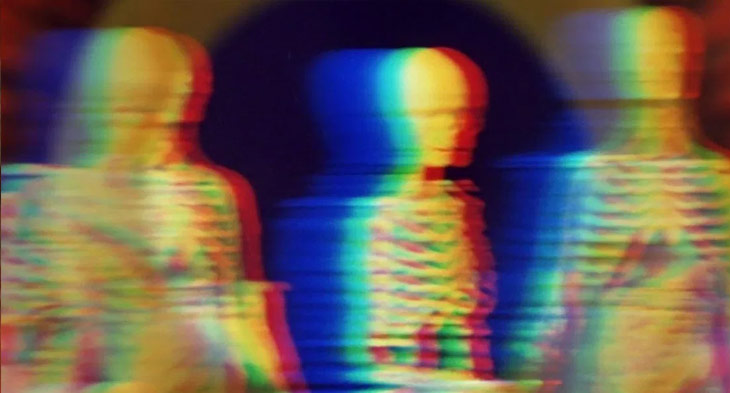 Everything he sees (and the effects are decent for the time – though reminiscent of a lot of ‘psychedelic’ movies of the 1960’s) is limned in a rainbow aura, blurring into bright light or dark shadows. He complains, as they drive through the city, that he sees it as half-formed, bereft of flesh, a naked skeleton of a city, still being built. The whole film has an unspoken Lovecraftian subtext – there are echoes of both “The Color Out of Space” and, more distinctly, “From Beyond.” Is that aura Tillinghast radiation? I kind of think it is.

After an attempt to game a casino (that goes pretty well, until the good Doctor’s ego gets in the way), Xavier flees – his eyes having progressed to a black sclera and golden irises. There’s actually a car chase with a helicopter – though both my wife and I spent the whole chase wondering how he can even see the road. The denouement – in a revival tent of all things – sees the Doctor’s eyes going full black, and his vision allowing him to see something at the center of all things. Something with a great eye that is aware it is being observed, and is looking BACK. “If thine eye offend the,” thunders the preacher, “PLUCK IT OUT.” Xavier, in pain and terror, is only too happy to comply. 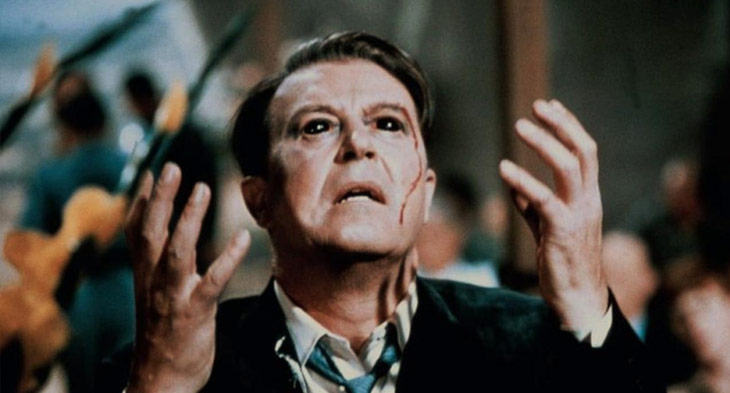 The Bottom Line
King mentions in Danse Macabre that there is a rumor that there was another ending to the film, one that adds a particular frisson of horror to an already terrible moment. He says that some people say the original ending – after the fade to black from Milland’s empty eye sockets – included a voice-over of Xavier screaming “I can still see!” Corman has variously claimed that he did indeed shoot such an ending – and that he never did, though he likes the idea of it.

My thought – and I think I probably saw this written somewhere else – is that the ending credits are actually Xavier’s view as he’s being brought back to the city by the police. That the faded, but still luminescent, outlines of the city framework, ARE what he sees. He CAN still see. It’s more subtle than the supposed voice over – but still disturbing.

It’s not quite as good as it had been built up in my head to be, but still an enjoyable ‘mad science’ horror film with some Lovecraftian influence.