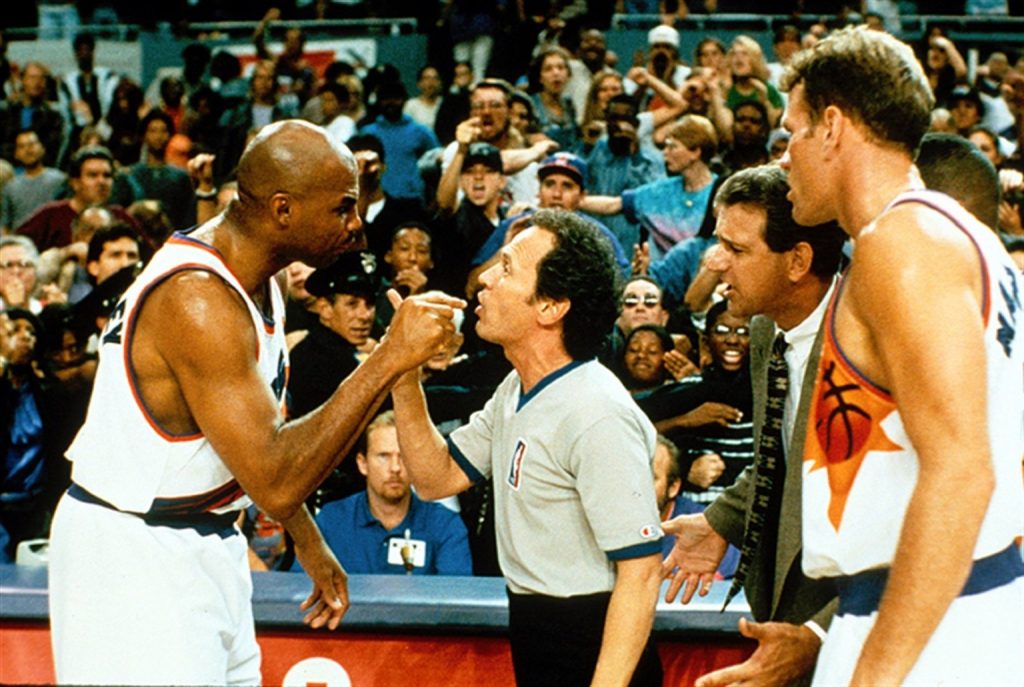 When his dad dies, Mickey Gordon (Billy Crystal) honors his last wish to be buried in Paris alongside his former army platoon from World War II. When the airline misplaces the body, Mickey is stuck in France longer than intended as he waits for his father’s remains to be found. Ellen (Debra Winger) happens to be the airline’s American representative who helps remedy the situation. Despite the circumstances, the two hit it off and begin to fall in love over the course of Mickey’s visit. When Mickey returns home, he realizes just how much he loves Ellen, and he returns to Paris to ask her to marry him. From there, the relationship experiences a lot of highs and a lot of lows.

What’s interesting about Forget Paris is that the story of Mickey and Ellen’s relationship is told by Mickey and Ellen’s friends. Andy (Joe Mantegna) is getting ready to introduce his fiancee Liz (Cynthia Stevenson) to his friends. While they wait at a restaurant, Andy ends up telling Liz about how Mickey and Ellen met. Soon they’re joined by Lucy (Julie Kavner) and Craig (Richard Masur), who pick up where Andy left off, each group of friends telling another chapter in the book of Ellen and Mickey.

The movie focuses more on what happens after the happy rom-com ending, when the leading man and leading lady declare their love for one another. For Ellen and Mickey, Paris was the storybook love, but what about after the wedding, when Ellen gives up her life in Paris to move into Mickey’s bachelor pad while he travels three weeks out of the month for his job as an NBA referee? The shine is certainly gone from the whirlwind romance pretty quickly, and Ellen and Mickey are forced to understand and accept that they may want different things in life.

The frustrating part for me was that we see a lot of unhappiness from Ellen, and then from Mickey, and then back to Ellen again, and so on. There’s a big chunk of the movie where the two of them aren’t even together much at all. Ellen is unhappy in Mickey’s apartment, stuck in a crappy job of her own. When he finally realizes he may lose Ellen because of it, Mickey gives up his dream job and moves into a house in the suburbs with her while taking a job selling cars at Craig’s dealership. So then Ellen gets promoted and loves her new house, but now Mickey is extremely unhappy and unfulfilled. Plus, he’s essentially taking care of Ellen’s elderly father who has moved in with them. When Mickey finally tells Ellen he wants to go back to work as a referee, she gets upset that he’s been so unhappy while never telling her so, and Mickey feels as though she should have been able to see his unhappiness herself. So yes, this is a rather realistic look at marriage, and how it will never work unless both people are on the same page and communicate.

Ellen and Mickey also have trouble conceiving and have to go through infertility treatments. As someone who suffered from infertility herself, this is part of the movie that I felt did a good job of showing just how the stress and cost of wanting to have a family can put a strain on a marriage, especially one as fragile as Mickey and Ellen’s.

The movie keeps you guessing through the storytelling of Mickey and Ellen’s friends as to whether or not the two remain together, or split up for good. It does have its humorous moments, mostly when Mickey is actually working. The scenes with the NBA stars and sportscasters are really laugh out loud funny and show Crystal’s talent as a comedian. I actually preferred those scenes over the rest of the movie. It just felt like it got bogged down in the middle, but I suppose that could have been some kind of purposeful choice, like, hey! This sluggish, slow part of the movie is a symbolism of marriage. Get it!?

Ultimately I found Forget Paris to be one of those movies that once it was over I just thought to myself “Okay. Well… that was okay, I guess.” I didn’t feel any real connection to Mickey or Ellen, and I don’t know if that’s due to the script, the direction, or my lukewarm feelings toward Debra Winger. Billy Crystal was charming, as usual, but Forget Paris is essentially a pretty forgettable movie.