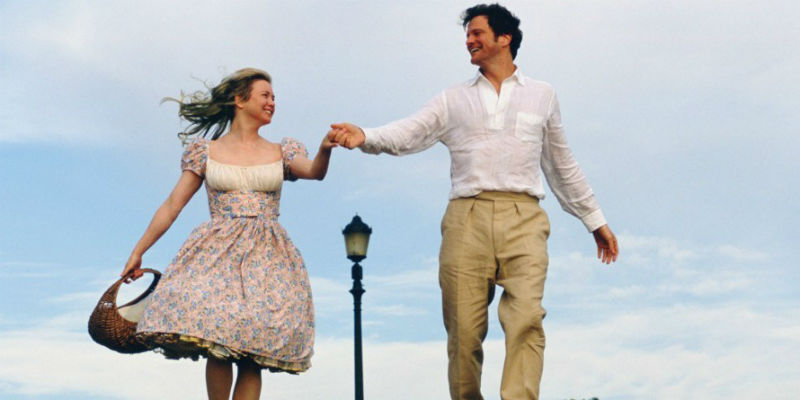 When I saw this back in 2004, I clearly recall not enjoying it as much as the first film. Yes, I still adored Renee Zellweger’s performance, and I will always swoon over Colin Firth as Mark Darcy, but there was something missing from The Edge of Reason. I remember feeling the same way when I read the novel and while I appreciated the changes they made from novel to screen in Bridget Jones’s Diary, the changes in The Edge of Reason just didn’t work for me the same way.

The Edge of Reason picks up where the original film left us, with Bridget and Mark engrossed in the blissful first weeks of their new relationship. It’s clear they’re in love, but doubts soon begin to creep in as Bridget realizes she’s not as worldly and sophisticated as Mark’s posh friends and colleagues. Not to mention the fact that he’s a (gasp) conservative voter and has a rather beautiful, young intern named Rebecca (Jacinda Barrett) constantly on his arm, sparking jealousy and insecurity within Bridget. She has a difficult time communicating this to Mark, who also has difficulty communicating much of anything to Bridget. After a few predictable misunderstandings and a pregnancy scare that reveals their different ideas for the future, Bridget breaks up with Mark.

From there the movie abruptly changes course, sending Bridget to Thailand with Daniel Cleaver (the devilishly smarmy Hugh Grant) where the exotic beaches and romantic moon tempts Bridget into giving Daniel another chance. Then we get some sluggish nonsense where Bridget is framed for drug smuggling and this is where I had begun to remember why I hadn’t really liked this movie in 2004. To be fair, I did enjoy it more during this rewatch, but only the first half, where we were dealing with Bridget and Mark’s growing pains. In romantic comedies, we always wonder what happens after the “happily ever after”, and The Edge of Reason had the potential to show us, even if it meant veering away from the novel completely. Instead, we get a silly second half that goes from mildly silly to just plain ridiculous.

The performances are still wonderful, which actually made the movie tolerable. Even with a wobbly script Zellweger still perfectly embodies Bridget’s charm. Firth and Grant stay true to their characters, and while not as iconic as in the first film, Mark and Daniel’s second fight in a water fountain is still as fun, probably because it’s a delight to see Mark show some real emotion, even if it’s pent up anger and resentment.

If you’re a fan of Bridget Jones’s Diary, The Edge of Reason is certainly worth a watch, but it’s simply lacking the heart that made Bridget Jones’s Diary so successful. I’m not sure if this is because of the script, or the fact that the movie had a different director. I know that Sharon Maguire did return to the director’s chair for Bridget Jones’s Baby, so I’m hoping that the conclusion to the Bridget Jones Trilogy will be a much more enjoyable one than this was.