Based on the 1938 John W. Campbell Jr. novella Who Goes There?, the film tells the story of a group of American researchers in Antarctica who encounter the eponymous “Thing”, a parasitic extraterrestrial life-form that assimilates, then imitates other organisms. The group is overcome by paranoia and conflict as they learn that they can no longer trust each other and that any one of them could be the Thing.

Sailor: Before we get into the film proper, have you seen either the original or the prequel?

Kane: I haven’t seen the original but I have seen the prequel. You?

Sailor: I haven’t seen either but I have read at least one sequel comic and I did play the game, which Carpenter endorses by the way.

Kane: Don’t you also own the board game?

Kane: Now’s the perfect time with the coro..

Sailor: I have no friends!!

Sailor: Moving on. What’s your first experience with the film?

Kane: I don’t remember the first time I saw it but I do recall having a hard time getting into it because it was much slower than the horror movies I was used too at that point. It was all fast-moving slashers and goofy 80s horror. It wasn’t till I saw the first monster that it sucked me with its ooey-gooey practical effects greatness. Plus I was watching anything with Jack Burton running the show.

Kane: By the end of it, I was ready to watch different kinds of horror movies from what I had been watching. It was the first time I wanted to know who made the movie and wanted to watch other things he had made. Which introduced me to Halloween, Escape from New York and an all-time favorite Prince of Darkness. John Carpenter became a must-watch and helped pay attention the directors name of films I loved so I could watch more of their filmography.

Sailor: The Thing holds a special place in my heart. For years, my uncles would tell me stories about this movie that had tentacle monsters and a guys stomach opening up and eating another guy’s arms and a head popping off, growing legs and running away. I never believed for a second that it was real but I thought it was a fun little inside joke we had. It wasn’t until years after, when they rented that, Demon Knight and Monster Squad that I found out that it was real. I’m almost positive that night turned me into the cinephile I am today. 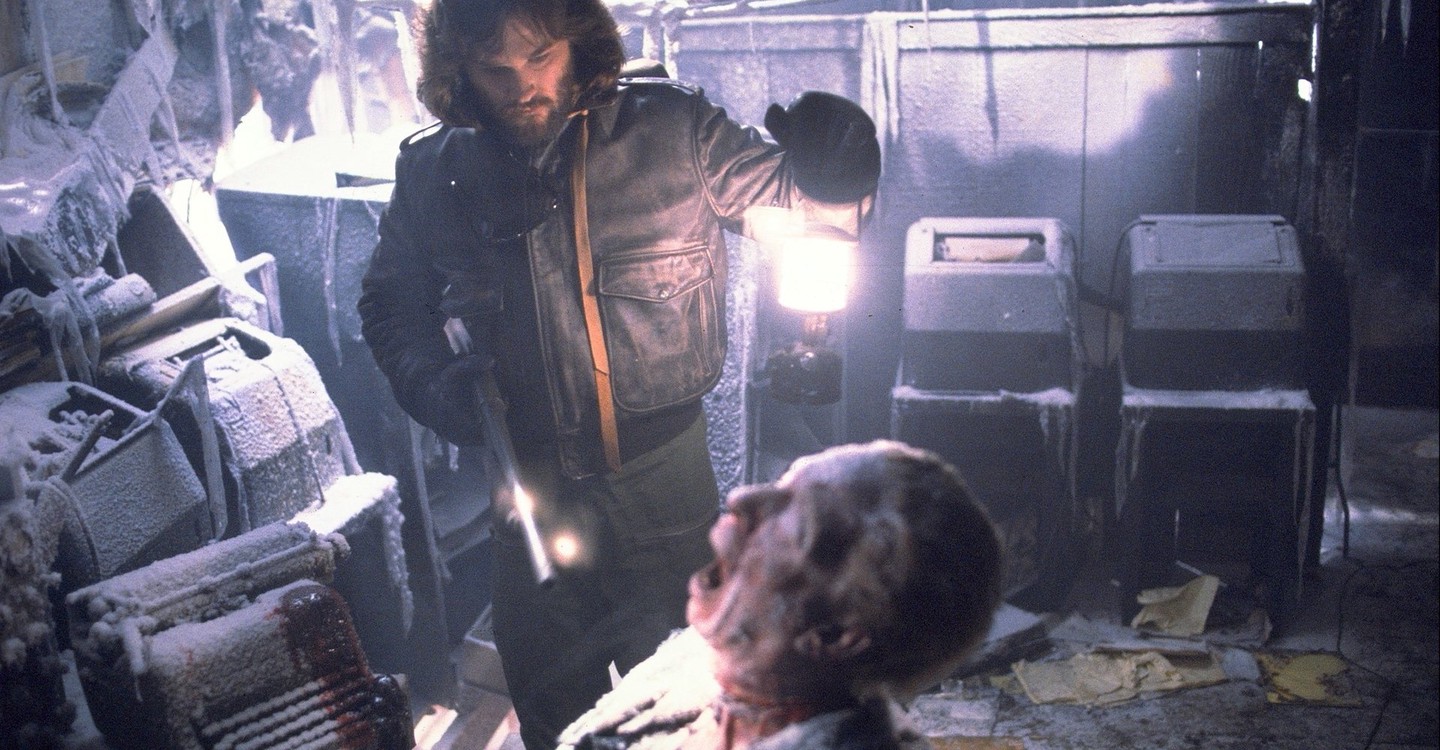 Sailor: I remember bits and pieces of the other films but I remember every frame of The Thing.

Kane: What was your favorite scene?

Sailor: Then? Probably the defibrillator scene. Now, it’s the…

Sailor: Or a boxer of equivalent talent who’s alive because getting punched by a skeleton isn’t that impressive.

Sailor: Actually, I take that back. If Ali came back to life just to punch someone, that would be truly impressive. It wouldn’t amount to much because skeleton but I’d applaud the effort.

Kane: This is why we can never have a podcast. You’d derail every conversation or discussion with bullshit.

Kane: What on Earth are you segueing to??

Kane: Ok. What about him? 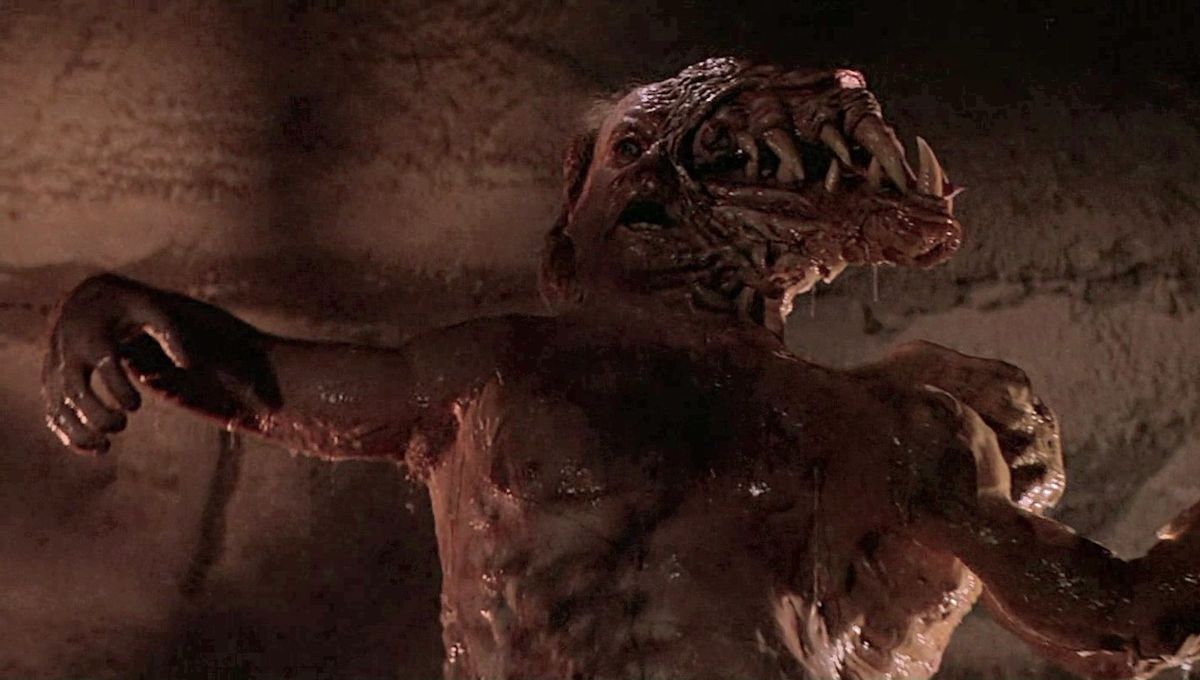 Sailor: I was thinking since both this and The Fly are usually always compared to one another due to them coming out around the same time and being practical effects titans, Which film do you think would be better:
Cronenberg’s The Thing or Carpenter’s The Fly?

Sailor: This is true but I think it would be interesting to see Carpenter try his hand at another romance. Starman is sorely underrated. And I don’t think Cronenberg can do tension as well as Carpenter.

Kane: But I don’t know if Carpenter could make the transition into drama like Cronenberg did.

Sailor: I think Cronenberg could’ve done the majority of Carpenter’s films but I don’t think the same could be said about Carpenter.

Sailor: But personally, I like Carpenter’s films more. I think they’re more entertaining.

Kane: I thought you were going with Carpenter!

Sailor: No. I think Cronenberg’s slightly more talented than Carpenter. 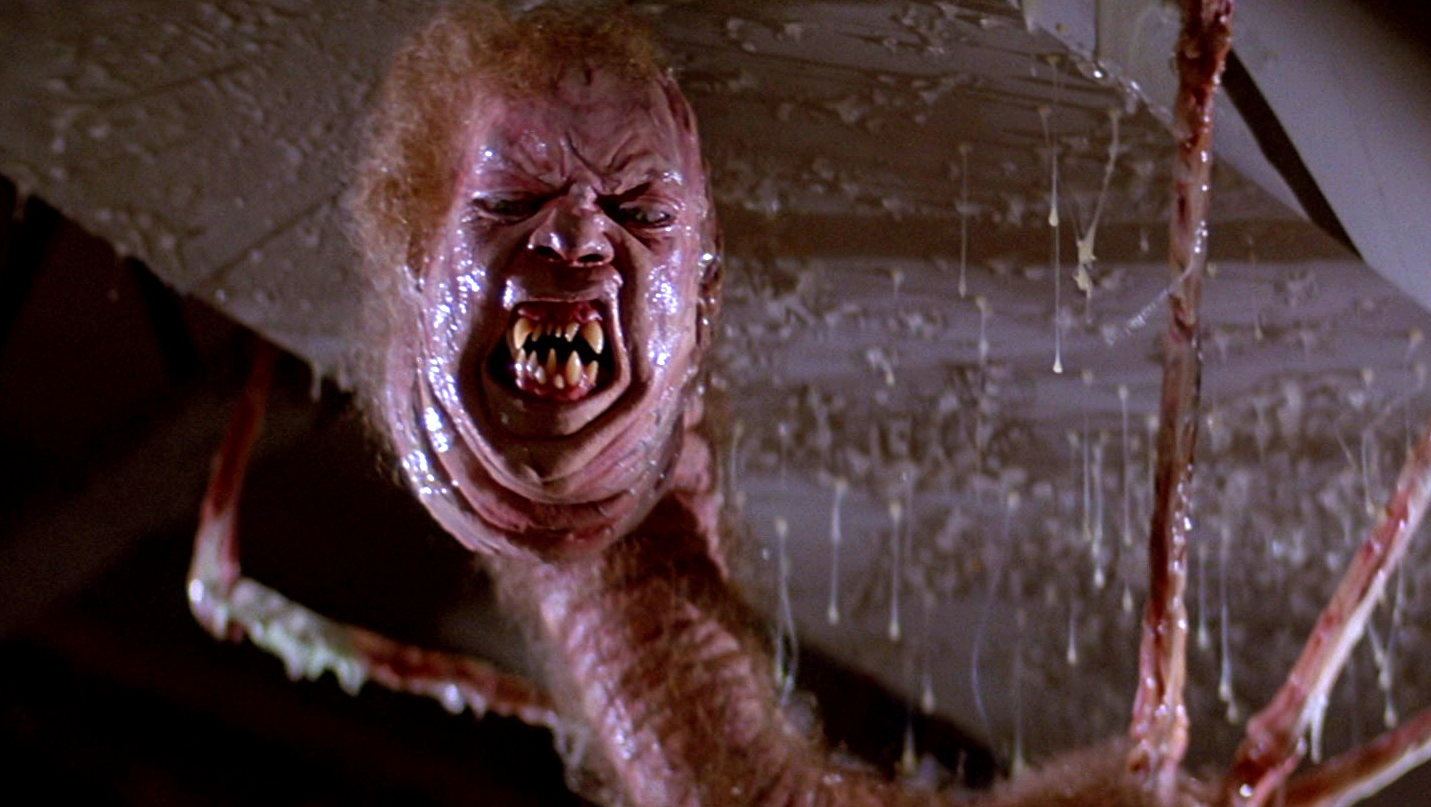 Sailor: Alrighty. Let’s get on to the casting.

Sailor: Who you thinking?

Kane: No one. I can’t imagine anyone.

Kane: Well, that’s not true. What about Not Tom Hardy as MacReady?

Sailor: I like it but I was thinking James Badge Dale.

Kane: The guy who shoots DiCaprio in The Departed?

Sailor: He’s done a million other things but yeah.

Kane: But I haven’t seen any of his shit. What do you recommend I watch?

Sailor: Little Woods and The Standoff at Sparrow Creek. I like the idea of keeping the cast to relative unknowns.

Kane: I don’t hate that idea.

Kane: You’ve been thinking about this for a minute, haven’t you?

Sailor: Off and on for about two months.

Kane: I can tell. Because I have no idea who that is.

Sailor: I know. He’s also great in Lord of War and Cadillac Records.

Kane: I’ll take your word for it.

Kane: What about Paper Boi from Atlanta?

Sailor: The one from Widows?

Sailor: I don’t mind that.

Kane: I’m fine with either.

Sailor: Yes. And I think we should cap it at those three and then just pick seven character actors and just slot em in wherever.

Kane: That works for me and Gene Jones.

Sailor: I like em but wouldn’t he be too old? This is a military base and I don’t know the protocol but I don’t think they recruit dumpy potato boys.

Kane: They recruited your mom. 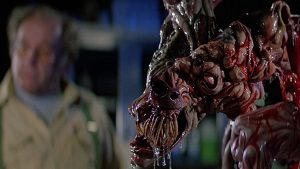 Sailor: That doesn’t even work.

Kane: Neither does your mom.

Sailor: Yeah because we’re in the middle of a pandemic!

Sailor: Don’t be salty because I’m shooting down your potato boy.

Kane: Karyn Kusama? The Invitation was tense and claustrophobic as shit.

Sailor: I’m not even fucking around
I didn’t say her because she’s unfortunately hit or miss.

Kane: I thought of the chick from The Lodge because I just saw it so I started thinking of female directors.

Kane: Jennifer Kent popped in my head but then Kusama stuck out because of The Invitation.

Sailor: I was also thinking of Dan Trachtenberg. The cat who did 10 Cloverfield Lane.

Sailor: I think he has the chops.

Kane: I was also trying to think of a director known for utilizing practical effects like the guys from The Void. But that film wasn’t very good though.

Sailor: If it was, they’d be at the top of my list.

Sailor: Fuck it. Kusama it is.

Kane: I think it is so hard to nail down why it’s perfect and explain to people who don’t get it. Everything about this movie was perfect at the time and has aged even better as time as gone by. The special effects of 1982 blow most movies in 2020 away. Especially in the horror genre. It’s tense, claustrophobic and is a great metaphor for the AIDS epidemic.

Sailor: This has been my favorite film since I first saw it back when I was like nine and no film has topped it. It’s the perfect scenario for a horror film: a bunch of people stuck in a giant metal coffin with no way to escape and with an alien that looks exactly like them. The suspense, paranoia, and tension Carpenter is able to milk out that premise, is worthy of a hundred films and my god are those effects amazing. I also love that even now, after having seen it about a million times, there’s still things I don’t know.  There’s a ton of shit the film just straight up refuses to answer.

Like who contaminated the blood?
Who was the first to turn?
Who turned Bennings?
What happened at the Norwegian camp?
Where did Childs go at the end?
The film has no problem giving you a math problem for you to figure out

What is your impression of The Thing? Did you like it and who would you cast in a remake? Comment down below and let us know.

Now here’s a question…Would you ever be isolated in Antarctica with nothing but guys while working for research?

How much am I getting paid and how long is the stay?

Hmmm. And there’s no monster scenario to contend with? I just have to be bored around some dudes?

There is risk of a monster scenario. May or may not happen.

Well, what the fuck is this shit! What percentage chance?

You bump that up to one hundred grand and you got yourself a deal.

Ok, no monster scenario but…It’s all men for 6 months, $100,000, once a week you have to play spin the bottle and whichever guy it lands on they have to have sex with the only female there…

Am I the female?

With the lights on…

Oh Goddamn it. You said no monster scenario!!. That’s worse than the last one!!

So which scenario are you taking?

Fifty Grand and there’s a likely chance that I’ll get eaten by an alien OR one hundred grand and I will most likely have to fuck one multiple times? That might be the hardest Goddamn question I’ve ever been asked in my life.

But you’d be alive in scenario B

Would I though? Because I already feel my soul dying with every imagined thrust.