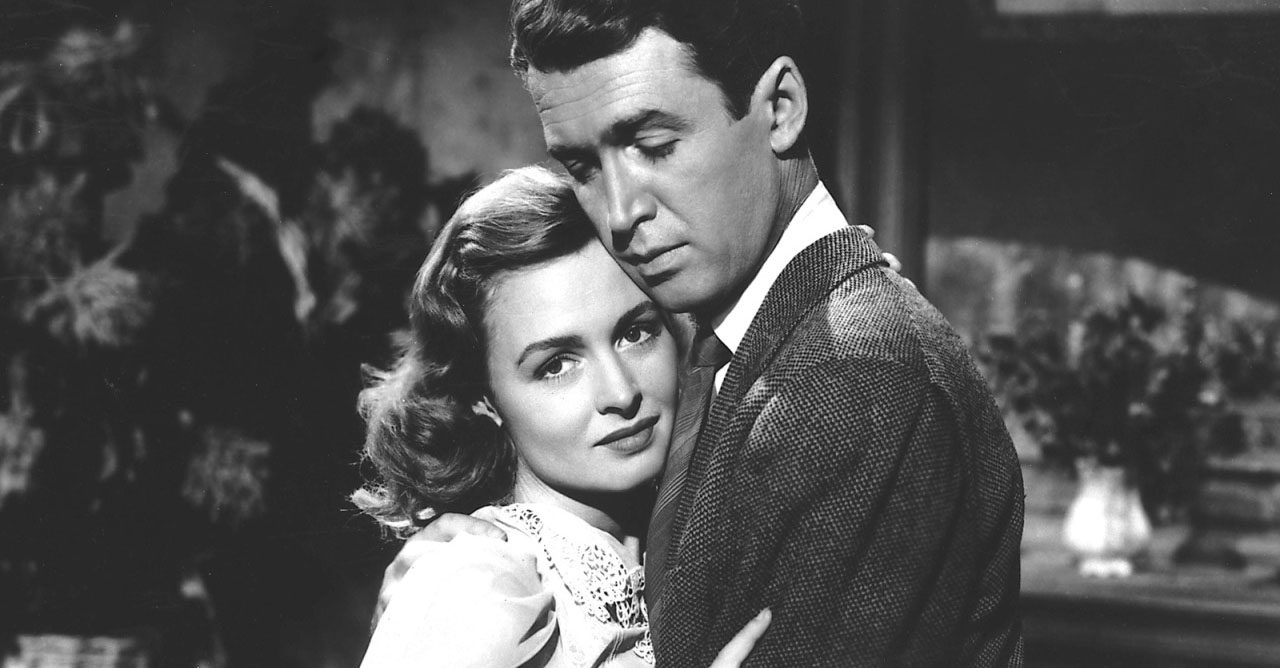 The holidays at the end of the year have always been an introspective time for me.  Thanksgiving, Christmas, and New Year’s all come within a few weeks of each other. It’s a time to enjoy family and friends, but it’s also a time that I tend to reflect on the past as well as the future. The happy memories and the uncertainty of what’s to come seem to make the cheerful moments happier and the sad ones even more melancholy. It’s A Wonderful Life distills these feelings into the two-hour tale of George Bailey, a man who starts the film on the verge of jail, financial ruin, and suicide. Sounds cheerful, doesn’t it? Don’t worry. There’s a happy ending.

George Bailey is a small-town dreamer with big plans for his future. George wants to see the world. He wants to build things. He wants to live a big life outside of the constraints of his small town. George Bailey is a good person who always has the best interests of those around him at heart. It’s because of his soft-heartedness that he ends up staying in little Bedford Falls rather than living his dreams. His desires always take a back seat when someone needs help or a problem needs to be solved. It’s this self-sacrifice and the regret of a path not taken that contribute to the despair he suffers when he finds himself on the hook looking at jail time when $8,000 (six figures in today’s money) is misplaced.

Filled with anxiety over the lost money and guilt-ridden after lashing out at his family on Christmas Eve, he leaves his home to have a few drinks at the local bar. Remembering a life insurance policy he has, he decides he’s worth more to his family dead than alive and resolves to jump off a bridge to his death. It’s then that he meets his guardian angel, Clarence, who shows him what the small town of Bedford Falls would be like if he’d never been born. After a look into an alternate reality where George Bailey never existed, he realizes the impact he’s had on the lives of the people around him and resolves to go home to face the consequences. To his surprise, the whole town has learned of the missing money. His friends and neighbors rally to contribute anything they can and more than cover the amount of the missing deposit. The film ends with a triumphant Christmas miracle and the audience is left with a smile on their face, a tear in their eye, and a warm heart.

Though it doesn’t strictly follow in the tradition of Christmas ghost stories, it’s similar to A Christmas Carol in that it’s a supernatural tale where the protagonists both have a spiritual guide. The difference is that Scrooge is shown the consequences of his actions. You might say the opposite is true for George Bailey. He’s shown what would happen if he was never alive…if his deeds had gone undone.

It’s not a pretty picture. We see, along with George, the way the sometimes small and seemingly insignificant actions of a single person have ripples that affect countless other lives. Without George, Bedford Falls is a den of iniquity called Pottersville. Nothing is the same and everything has changed for the worse. The similarity to A Christmas Carol is in the ending, when George is positively affected by what he sees and gains a renewed sense of purpose. By the time the whole town shows up to bail George out of his problem, you’d have to be a robot if you haven’t had to tell yourself to keep it together at least once. 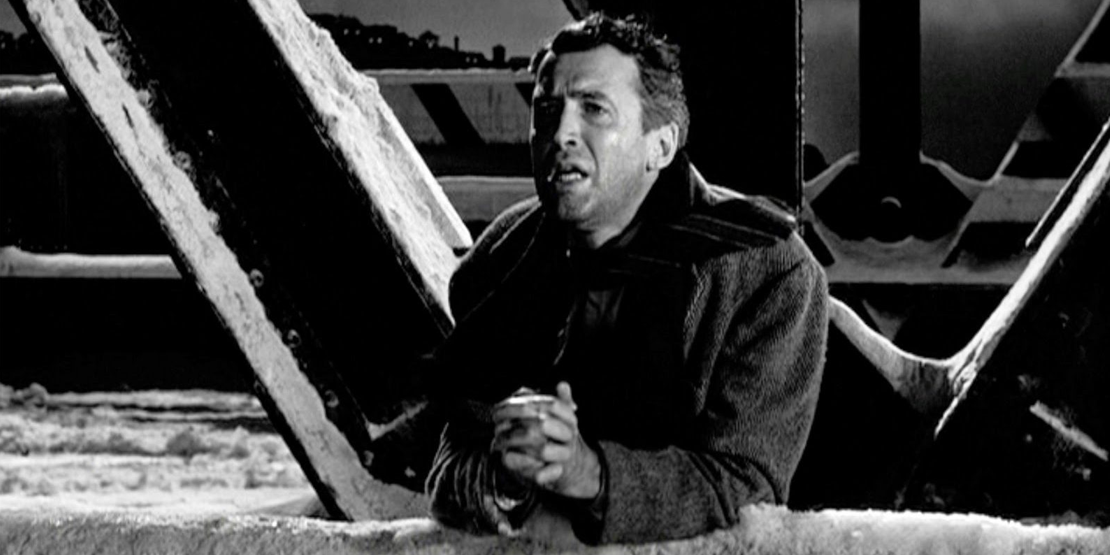 Over the years, the fact that It’s A Wonderful Life underwhelmed at the box office and with critics has been overplayed and exaggerated. It was a financial disappointment that failed to make its money back upon initial release. And though not universally disliked, critical response was mixed. Time, however, offered a favorable review that called it one of the best pictures of the year. Others were less generous, calling it out for its sentimentality and wondering if Capra had lost his touch. “Capra-corn” was a derisive term that was tossed about. Despite the criticism, both Frank Capra and James Stewart have said that it’s their favorite film.

James Stewart apparently felt a little nervous in front of the camera during the production.  It was his first film after serving on a bomber during World War Two and he felt “rusty.” He worked through it with the help of his cast-mates and to this day the film stands as one of his most beloved performances. In the scenes during his emotional descent, we see a little bit of the darkness that would inform performances later in his career for directors such as Alfred Hitchcock.

According to the “making of” feature on the DVD, It’s A Wonderful Life went against the film code of the time, which stated that criminals in film must suffer consequences for their actions. Potter never gets his comeuppance from keeping the building and loan’s $8,000.  I had always wondered what exactly happened there. Did Potter just keep the money?  Probably so. Schmuck. 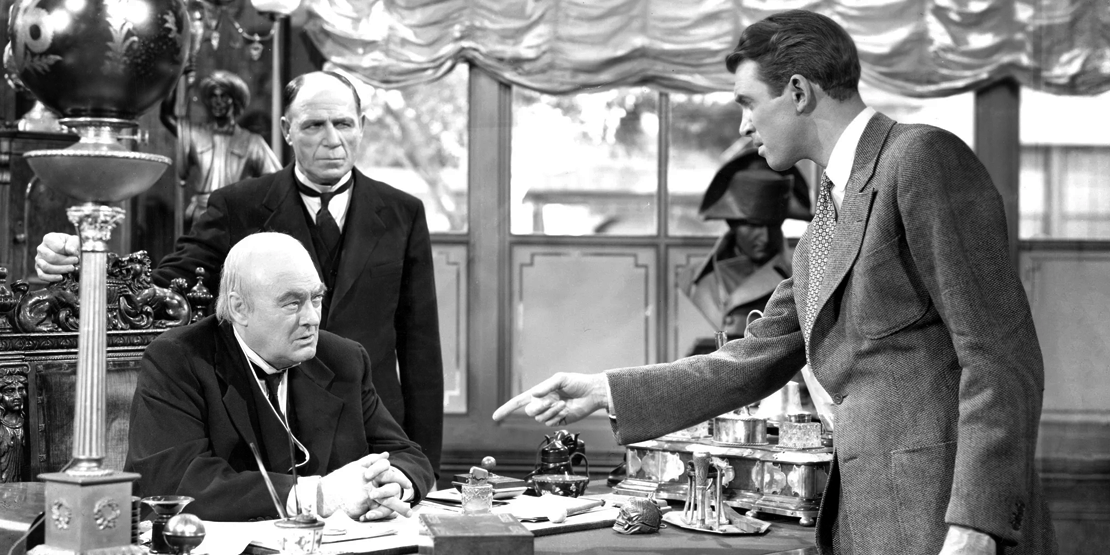 So, yes, It’s A Wonderful Life is sentimental. It’s a romantic idealization of small town life. It’s simplistic. Solutions to life’s big problems, when there ARE solutions, are often harder to come by.  But there are lessons in this sentimental old movie. Our lives do matter. How we treat people does make a difference. Sometimes our dreams go unfulfilled. That doesn’t mean our lives are devoid of meaning, though. For one reason or another sometimes we don’t get to take the road we want to take. But that doesn’t mean that the journey will be any less rewarding or that there won’t be moments of joy or transcendent meaning any less profound than the ones we think we’ve missed out on.