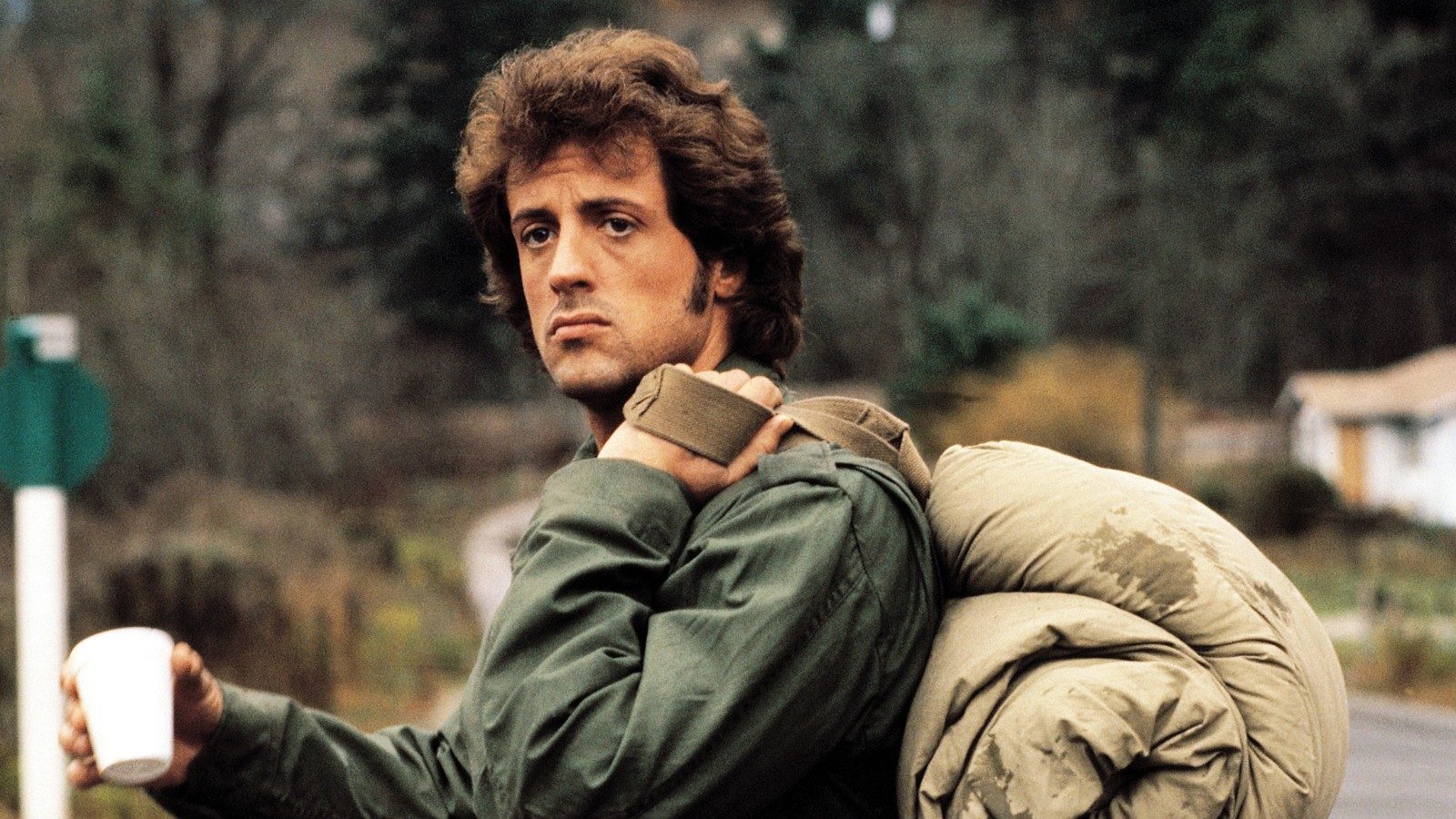 The First (and Best) Rambo Movie

First Blood, the first film of the Rambo franchise, is based on the 1972 anti-war novel of the same name by bestselling author David Morell. The film, like the book, tells the story of Rambo, a veteran of the Vietnam War, who runs afoul of a local, small town lawman and winds up waging a one man war against the police force and local national guard unit.

The 1982 film adaptation retains the title and structure of the source material but actually tones down the violence and backs off of Morell’s more tragic ending for the character. Oddly enough, critics at the time dismissed First Blood as too violent even though only one (arguably accidental) death occurs in the entire film.

Don’t get me wrong, First Blood is undeniably an action film, and it capitalizes on the spectacle of Rambo’s special warfare training to hold the audience’s attention and propel the film along. But from the opening notes of Jerry Goldsmith’s somber theme “Home Coming”, it’s clear we’re in store for something more than just the carnage and mindless mayhem that characterizes the film’s many sequels.

Cinematographer Andrew Laszlo’s first shot is a fade in on what might as well be a still life, a slice of picturesque Americana that director Ted Kotcheff patiently lets unspool for the better part of two minutes before shifting the camera’s focus. When he does, we get our first good look at John Rambo (played by Sylvester Stallone). If your only experience with the character up to this point has been the lunchbox image of the missile launcher-wielding muscleman, you might be surprised: In a tight shot, Rambo, framed by cloudless blue skies, is smiling. Rambo’s expression and Laszlo’s photography of the idyllic British Columbian countryside (acting as a stand-in for Washington state) in that opening scene seems optimistic, but Goldsmith’s theme foreshadows a tonal shift that will carry the character of Rambo and the audience through to the film’s tragic final scene.

When we catch up with him at the beginning of First Blood, Rambo is trekking across the United States after being discharged from the Army, looking for friends he served with during the war. Although we don’t find out until much later, when we meet Rambo for the first time, he is a man dangling at the end of a fraying rope, hanging onto the hope that at least one of his friends, Delmar Barry, is still alive. Barry is Rambo’s lifeline, the last connection to the only world he understands. A world where his life has value and purpose.

Stallone, in the audio commentary, discusses how he went about playing Rambo as more of an innocent, almost childlike character in these early scenes. The actor changed his body language so that he presented an unthreatening figure and delivered his lines as if he were less sure of himself, like a man who rarely has the opportunity or reason to talk to another living person.

And Stallone nails it.

When Rambo discovers that his last friend in the world has died of Agent Orange-related cancer, his hopeful expression disappears and his shoulders slump; the childlike optimism in his voice is replaced by a barely audible mumble as he offers his condolences, and the one picture he has of him and his former brothers-in-arms together, to Barry’s surviving family member and walks silently back up the sunny green slope that had been so full of promise only moments before.

At this point, the fraying rope has snapped, and Rambo is a man adrift without anything to anchor him in a world so seemingly foreign and unforgiving to him.

I like to think that the name of the town Rambo wanders into after finding out about his friend’s death is one of the movie business’s little unplanned synchronicities. It’s hard to imagine the name was the deciding factor in choosing this specific Canadian mountain town as the film’s primary shooting location, but Kotcheff and crew are clearly aware of the irony of setting a film in which the protagonist loses all hope – in a place literally called “Hope”. Although never directly referenced in the film, the town’s name can clearly be seen as Rambo crosses under a large sign that reads “Welcome to Hope: Gateway to Holidayland”.

Rambo’s looking for a bite to eat and a little rest, but Brian Dennehy’s Sheriff Teasle happens upon him before he can find either and starts to harass him. Rambo’s hair is long and Teasle mistakes him for a common drifter, probably a hippie leftover from the previous decade. He offers to give Rambo a lift, but drives Rambo out of the city limits and drops him by the side of the road. It’s the dead of winter, and as a light rain begins to fall, Rambo, with nothing left to lose, ignores the sheriff’s warning to move on, and begins the lonely walk back into Hope.

Teasle is a jerk, and he instigates the conflict that lands Rambo in jail, but it’s unclear whether he actually condones what happens next.

Teasle’s deputies take Rambo into the police station basement for booking and processing, but Rambo, feeling like he has been unjustly detained, is uncooperative. When Teasle’s deputies start to rough him up, Rambo becomes unresponsive and begins to have flashbacks to his time as a prisoner in a Viet Cong POW camp. His Green Beret training reflexively kicks in, and Rambo neutralizes the threat the deputies present and escapes into the surrounding mountains on a motorcycle. Teasle and his men give chase, but Rambo eludes the inexperienced officers and uses the rugged mountain terrain to wage a one-man guerilla war on Hope and its podunk police department.

The first cut of First Blood was over 3 hours long. According to Stallone, it was so bad, it left him feeling physically ill, and he and his agent contemplated buying the film and having it destroyed out of fear it would ruin Stallone’s career.

Fortunately, that didn’t happen. The film was cut down to its theatrical runtime of 93 minutes, and, upon its release on October 22, 1982, became a box office success, bringing in $125 million against a paltry $15 million budget, and another $23 million on home video.

First Blood spawned a series of sequels, an animated series, a line of merchandise (including toys and lunchboxes), a video game, and several copycats (including three Missing in Action films starring Chuck Norris). Unfortunately, though financially successful, none of the sequel films ever managed to recapture the tone and overall quality of Kocheff’s original film. Most of the pathos in Stallone’s original portrayal of the character was gone, and the image of Rambo that was left in the popular culture was that of the strong, silent, invincible hero – an image the public loved but that was far less interesting than the flawed and vulnerable character we see returning to a country that drafted him into a war it would later condemn him for taking part in. (Though not within the scope of this article, it’s worth mentioning that the patriotic-themed sequels and copycats that littered the 1980s somehow resonated with American audiences despite a complete dearth of support for the Vietnam War and the men who were drafted to fight that war in the previous two decades.)

What Could Have Been

I loved the sequels to First Blood when I was a kid; no amount of posturing as an adult will change that fact. Like other guys my age, I was raised on action. The more of it, the better. The second and third films fit the bill perfectly. I even watched the cartoon, had a lunch box, and ‘played Rambo” with friends.

But times change and when news of a fourth Rambo film was announced, I had high hopes that the filmmakers would take a similar approach to the one the Rocky franchise had taken two years earlier. Rocky is a serious film that turned into a silly action franchise. Stallone took it back to its roots in 2006 with Rocky Balboa. The film was a box office and critical success. It seemed like a no-brainer that a new Rambo film would follow in the other’s footsteps.

And with what seemed like a never ending war on terrorism in Iraq and Afghanistan, a Rambo sequel was perfectly poised to go back to the franchise’s origins and do something serious with the character. Instead, what we got was what amounted to a remake of Rambo: First Blood Part II with CGI blood and even more violence. Rambo was a disappointment, to say the least, and last year’s Rambo: Last Blood continued the franchises misunderstanding of its own character.

What First Blood Means to Us

As a kid, the action and Rambo’s seemingly invincible nature brought me back to First Blood again and again. As an adult, the melancholy tone Kocheff establishes from the beginning, Andrew Laszlo’s sweeping cinematography, and the pathos Stallone brings to what could easily have been a one-note character make First Blood a yearly rewatch for me.

The first Rambo movie may have been a violent action film for its time, but it’s one of the best examples in the genre that is not only perfectly paced but also underpins its action with real human drama. First Blood avoids simple caricatures and succeeds in saying something important and timely about the post-Vietnam War era.

Muscles bulging beneath a sheen of sweat. Hard jawline and pure machismo. Guns ablaze and choice words after a grisly dispatching of the bad guy. Run the gamut of iconic action heroes and one of them, if not the first one, is sure to be John Rambo.

Yes, Stallone helped spawn franchise-thinking and define an era of Hollywood films. But before that, before Rocky became Rocky II-V, before John Rambo became Rambo… Before the muscles and zingers, there was loneliness, desperation, confusion and distrust. There was First Blood.

There was theme and character nipping at the heels of the Vietnam War and America’s reconciliation with it. There was simplicity and a bit contemplation too. What happens to our heroes when our government fails them? In John Rambo’s case, he fights. He survives, only to be betrayed again and again. In a broader sense, Hollywood betrayed him again and again. But, I’m alright with that. Rambo taught me conviction doesn’t simply evaporate when a struggle or conflict appears. He also taught me sometimes heroes are reborn, and in glorious and iconic ways.

John Rambo lived on to become more than he was, yet he also took his life (if only in an alternate cut).

Both heroes can exist, the icon and the man, and both do.

What are your fond memories of First Blood? Do you have another point of interest on the film? Share it in the comments below!