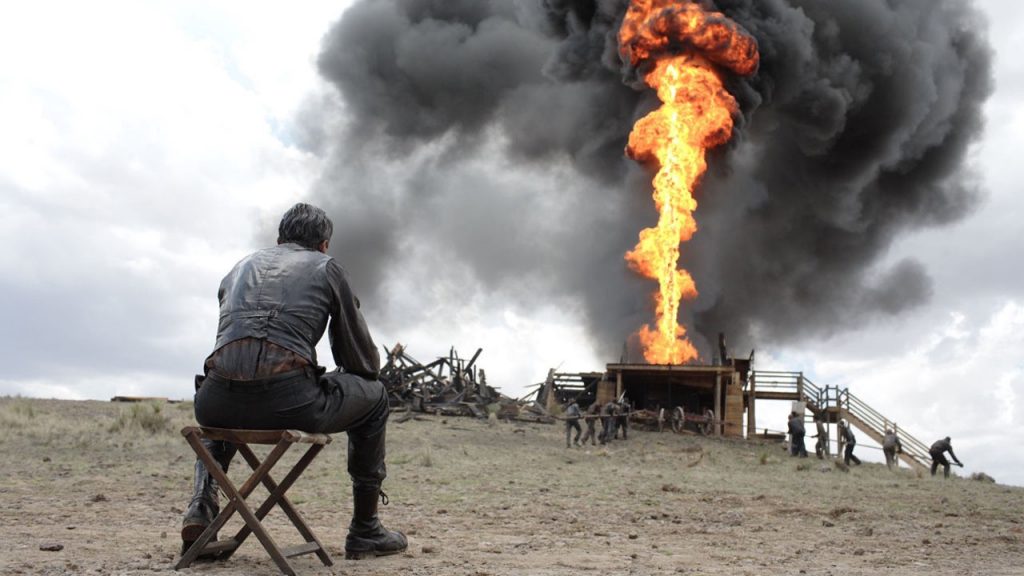 Loosely based on Upton Sinclair’s 1927 novel Oil!, There Will Be Blood takes a look at the oil boom in early 20th century America, as the country arrived at a crossroads of capitalism and religion. A titanic tale of Citizen Kane-like proportions, Daniel Day-Lewis won an Oscar for his portrayal of lowly silver miner turned oil tycoon Daniel Plainview. A look at what happens when a ruthless search for money and power comes to fruition, it’s central themes still feel relevant today.

What TWBB Means to Us

Released in 2009, I didn’t actually watch TWBB until 2015. A good friend lent it to me and even though I’d heard good things, I was in a place in my life where a running time of over 2 and a half hours was enough to put me off. One Sunday, with nothing better to do, I eventually took the plunge and it’s no exaggeration to say it had a massive impact on me. I was mesmerized for the entire runtime and in the end, could have watched another 2 and a half hours. It reinvigorated my love of cinema and my appreciation for acting in particular. I never felt like I was watching Daniel Day-Lewis performing, I was watching a real-life oil baron on screen. I’ve always had a passion for film but TWBB gave me the kick up the butt I needed in my 30s to fall in love all over again. It encouraged me to start writing about movies and also start a twitter account, which in turn led to me contributing to ScreenAge Wasteland. It remains my favorite film ever made, with what is in my opinion, the greatest performance ever seen.

PTA is a nut I can’t seem to crack. While critics and cinephiles both love his films unreservedly and treat him like he’s the new God King of film, I’m left baffled after each of his films as to why. He knows how to construct a handsomely made film with stellar performances and amazing… everything but none of that matters if I don’t feel like there’s any substance. I see gourmet chocolate bunnies: no matter how well they’re put together and how gorgeous they look, they offer no real sustenance. Even the films of his I did like, I got everything I needed from them from the first viewing. I have no desire to rewatch or revisit any of his films. Save for one: There Will Be Blood.

I couldn’t tell you what it is about this film that bewitches me every time I watch it or why it’s the only PTA film I’ve seen multiple times. I have no particular affinity for the oil business nor do I care one way or another about any of the characters in the film. Daniel Plainview (played to perfection by Daniel Day-Lewis) is a rotten human being, Eli Sunday (Paul Dano in 100% slimy lizard mode) is arguably worse and everyone else is shades of unlikable grey. The score is almost maddening, the length is damn near unbearable and the pace is snail-like but again, I love it all. I have no idea how he did it but somehow, inexplicably, PTA managed to not only make one of the my favorite films ever, but a film that I hold in such high esteem, I have no problem declaring it the best of the 2000’s.

I ain’t gonna lie: the first time I saw There Will be Blood, I didn’t like it. I had no idea what the fuck was going on. Well, that’s not entirely true. I followed the plot fine. I just had no idea what the point of it all was. It seemed nihilistic and mean-spirited and I pretty much hated all of the characters. I mean, what’s to like? Not to mention Paul Dano. Ugh. It’s not his acting. It’s his face.

I pretty much hated There Will be Blood, but it seemed to take a liking to me. It basically haunted me. It wouldn’t leave me alone. I couldn’t stop thinking about it. The more I thought about it, the more questions I had. What is the film saying about progress? Ambition? “Great men”? America? Americans? Humanity?

I tend to reject this anti humanist idea that people are bad for the planet and bad for themselves, but what impact our decisions, actions, and progress in the world makes are worthwhile questions.

And There Will be Blood has a helluva of a way of forcing the audience to contend with them.

From Oil! to There Will be Blood 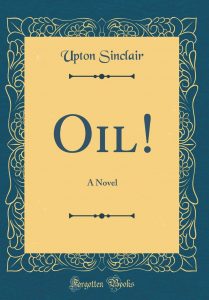 Eric Schlosser (an American journalist and author known for investigative journalism) released Fast Food Nation in the early 2000s, a book that drew comparisons to Upton Sinclair’s 1906 novel The Jungle. He was constantly asked by reporters about Upton Sinclair and what influences the author had on him, due to similarities between the books. Relatively unknown to Schlosser at the time, he decided to check out some of the author’s work. He fell in love with Oil! and began to think it could be something special if properly adapted to the big screen. After buying the film rights from the Sinclair estate, he was approached by Paul Thomas Anderson who was also fascinated with the novel. Anderson went on to adapt the first 150 pages into his screenplay and to help with this he made numerous trips to museums dedicated to early oilmen. He also changed the title from Oil! to There Will Be Blood because he felt he wasn’t adapting the entire book, just a select portion.

On writing the screenplay he said:

I can remember the way that my desk looked, with so many different scraps of paper and books about the oil industry in the early 20th century, mixed in with pieces of other scripts that I’d written. Everything was coming from so many different sources. But the book was a great stepping-stone. It was so cohesive, the way Upton Sinclair wrote about that period, and his experiences around the oil fields and these independent oilmen. That said, the book is so long that it’s only the first couple hundred pages that we ended up using, because there is a certain point where he strays really far from what the original story is. We were really unfaithful to the book. That’s not to say I didn’t really like the book; I loved it. But there were so many other things floating around. And at a certain point, I became aware of the stuff he was basing it on. What he was writing about was the life of [oil barons] Edward Doheny and Harry Sinclair. So it was like having a really good collaborator, the book. 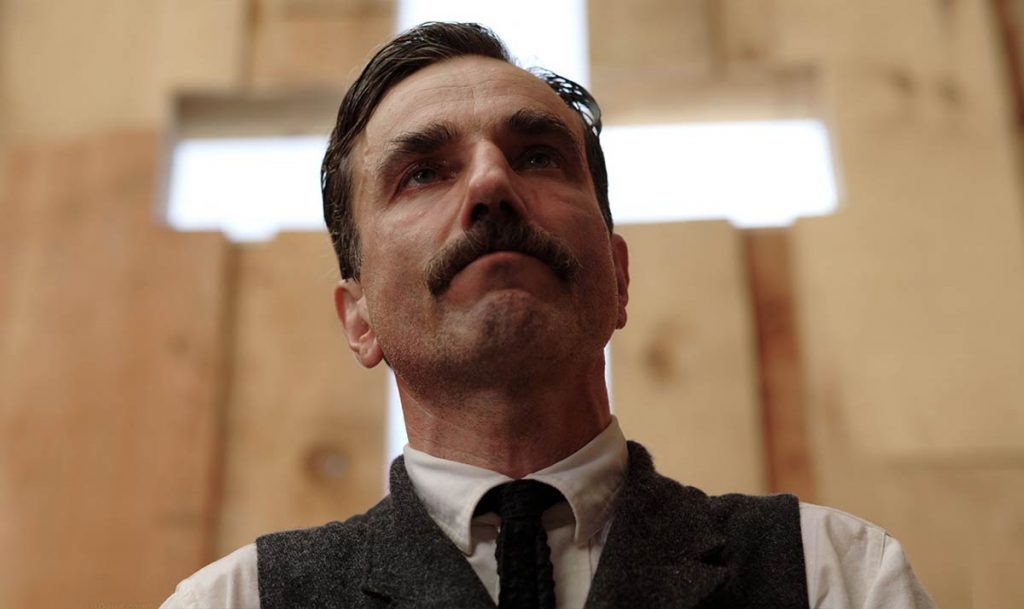 There are very few people who would deny that Daniel Day-Lewis is one of the finest actors to ever grace the screen. He does however pick and choose his roles, leading to his on-screen performance numbers being minuscule compared to most other working actors. One of the reasons for this is his dedication to the roles he picks. He has been known to disappear for years at a time to become a real-life butcher, boxer and cobbler. He even broke a few ribs playing Christie Brown in My Left Foot after spending too long slumped in a wheelchair.

For There Will Be Blood he read old letters from miners and studied photographs of men on the oilfield, scooping up oil in saucepans and buckets. Anderson also sent him voice recordings from the turn of the century and a copy of the 1948 film The Treasure of Sierra Madre to help him get an idea of the accent of the time. All this led to him embodying the character, although his method acting ways were too extreme for some. Kel O’Neill was initially cast as preacher Eli Sunday and it’s widely rumoured that he left the set two months into filming because he found Day-Lewis to be too intimidating in his methods. It’s hard to imagine anyone but Paul Dano playing the part of Eli Sunday, so that probably worked out for the best.

Dano himself said that on set things were very unpredictable as they didn’t do many rehearsals, which in turn led to him not knowing what to expect. He cited the final scene as a prime example of something that looks very different on paper than in reality. I can imagine how reading the word ‘drainage’ on a script might seem like nothing. To have a crazed Day-Lewis screaming it in your face, saliva dripping from his chin and eyes popping from his head must have been quite the experience.  He labelled Day-Lewis’ style as powerful, which sounds much more appealing than intimidating. All in all the methods worked and helped deliver one of the most memorable on-screen characters of this generation. 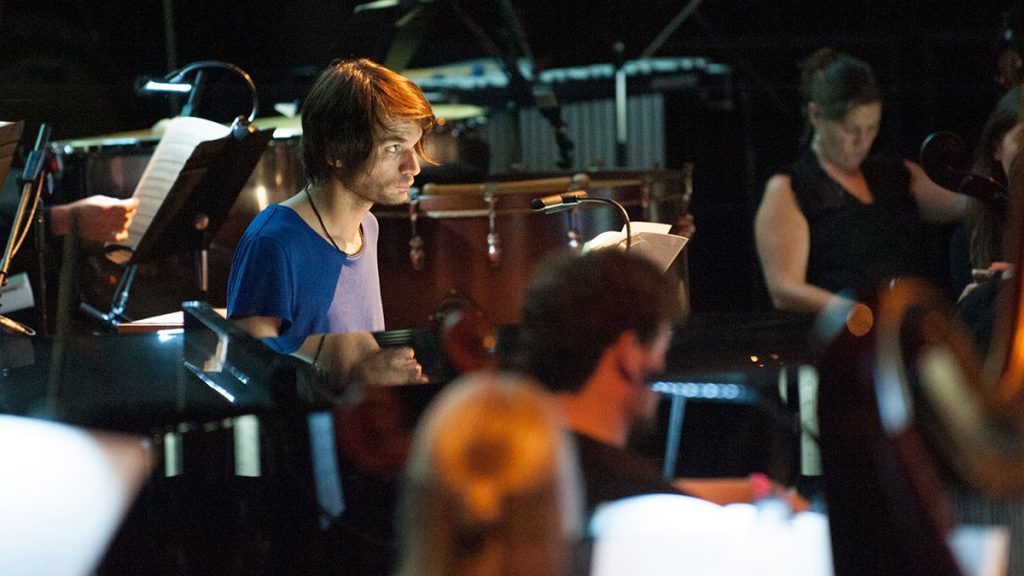 Something that always stands out to me when I rewatch TWBB is the score. It’s a constant throughout and sometimes gives the impression that the movie could almost have passed as a silent film, with the score to tell the story. An orchestral blanket enveloping the film, Radiohead guitarist Jonny Greenwood is responsible for it. Anderson was a fan of Radiohead in general and was impressed by Greenwood’s work on the film Bodysong and his piece “Popcorn Superhet Receiver”, leading to him asking Greenwood to work with him on TWBB. Greenwood stated:

I think it was about not necessarily just making period music, which very traditionally you would do. But because they were traditional orchestral sounds, I suppose that’s what we hoped was a little unsettling, even though you know all the sounds you’re hearing are coming from very old technology. You can just do things with the classical orchestra that do unsettle you, that are sort of slightly wrong, that have some kind of undercurrent that’s slightly sinister.

Sinister is an appropriate word for the journey he takes us on with his score. It was nominated for a Grammy for “Best Score Soundtrack Album for Motion Picture, Television or Other Visual Media” and was awarded the Silver Bear for outstanding artistic contribution (music) at the 58th Berlin International Film Festival in 2008.

TWBB is such a unique production that it’s hard to imagine anything trying to imitate it in the future. But in a way, that makes it’s legacy all the more special. It was nominated for eight Oscars in 2008 and came head to head with the Coen brothers’ No Country for Old Men. Strangely it wasn’t the first time the films clashed, as both ended up filming at the same time in the same remote town (Marfa, Texas). The shooting of No Country for Old Men actually had to be cancelled for 24 hours as smoke from a pyrotechnic test on the TWBB set could be seen. No Country for Old Men had the last laugh, as it ran away with the majority of awards that year. Yet I have a feeling TTWB will be the film to have the longer-lasting legacy. That’s not a slight on the Coen Brothers’ masterpiece, it’s just in years to come I think There will be Blood could be looked upon as one of the greatest American movies of the 21st century.

What are your fond memories of There Will be Blood? Do you have a fun fact or piece of trivia on the film? Share it in the comments below!