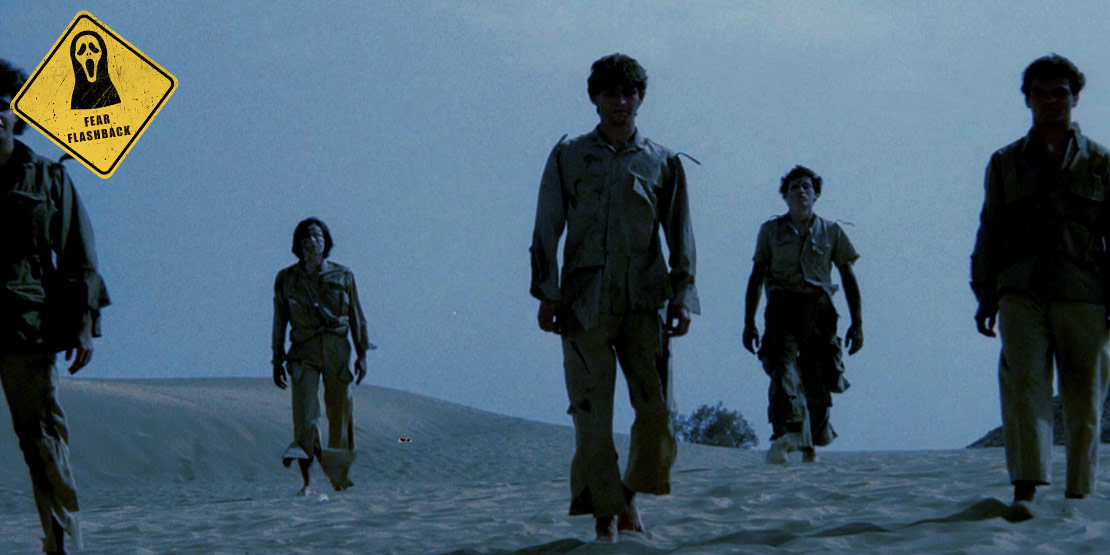 “Let’s find some bottles and make Molotov cocktails. Like in school!”

Sometimes you’re just in the mood for a bad movie. Or maybe that’s just me, I dunno. This is a mood that comes and goes for me, but I will sometimes just start looking for films that seem actively bad, or – as in this case – even revisit a movie that I KNOW is terrible. I’m not sure why that is, maybe I’m slightly masochistic or maybe I hope against hope that THIS time will be different. Whatever the reason I occasionally make the effort to view things that aren’t good for me, or anyone really. 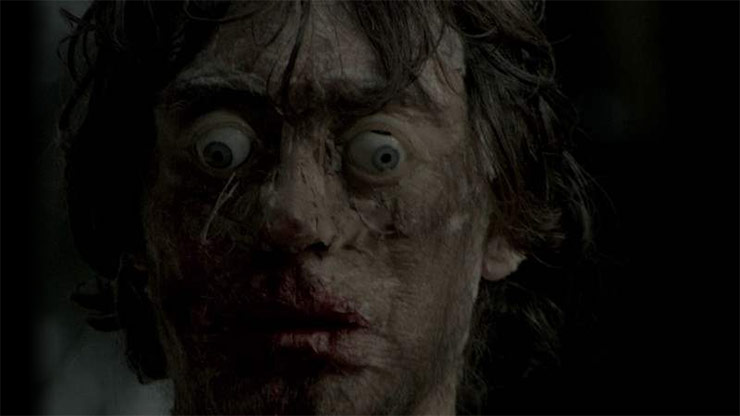 I don’t tend to review those movies for this column, though. Part of the deal with Fear Flashback is that I’m reviewing films I’ve already seen, so I make an effort to tell you about films I want to recommend, things that I think are worth watching – even if I’m the only person that thinks that. When I do 31 Days, 31 Horror Movies in October there’s more of a chance that I’ll stumble across something I didn’t like or doesn’t work for me as I’m choosing things more on the spur of the moment.

This is a roundabout way of apologizing for reviewing a film I didn’t like. If you don’t want to read negative reviews you can safely jump out at this point. Because this WILL be a negative review.

Oasis of the Zombies is a terrible movie.  Not just bad, but actively terrible.  The acting is atrocious, the script manages to be both minimal and confusing, the cinematography is flat and uninspiring (with one or two exceptions) and the camera work is actively painful to watch.  Add to that some truly amateurish dubbing, an annoying electronic score and editing that lingers over crappy zooms, but cuts too quickly from anything interesting and you start to wonder if the filmmakers just hated moviegoers. (I know the director, Jess Franco, HAS made some interesting films – ones I have enjoyed almost despite myself – this, however, is not one of them.) 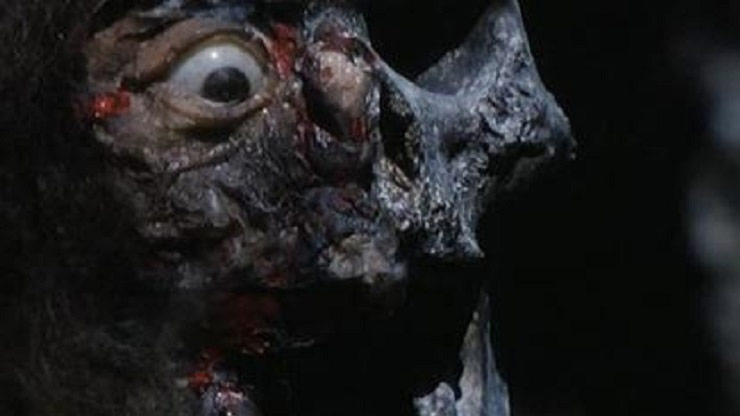 How bad is it?  Bad enough that when I first saw it, I turned it off I sat and watched a few minutes of Friday the 13th: A New Beginning to ENJOY THE QUALITY OF FILMMAKING.  At least Oasis of the Zombies gave me that – the ability to appreciate simple, workmanlike productions.

The Medium
Oasis of the Zombies is available for streaming on Tubi (with ads), Kanopy (for subs) and for rent/purchase on Amazon. IF you choose to subject yourself to this film, however, I’d suggest streaming it on Midnight Pulp. This is actually the third time I’ve seen this movie and the quality of the copy on MP is actually significantly better than any other release I’ve seen, including DVD releases (looking at you Cheezy Flix). This is probably due to the Kino Lorber/Redemption Blu-ray release.

Yes, there was a Blu-ray release.

The Movie
The plot of Oasis of the Zombies, as much as I can make it out, goes like this:

In the middle of WWII, a British patrol is tasked with hunting down a mysterious German army convoy somewhere in the deserts of North Africa.  After following their path of destruction (they apparently kill any natives they come across in order to hide their movements – because leaving a trail of destruction and corpses is the best way to do that) for weeks, the Brits find an oasis where the Nazis have been, but have not yet “finished the job.”  Knowing they’ll be back, the Brits set up an ambush. In the ensuing carnage only the British captain escapes – wounded and delirious – into the desert. 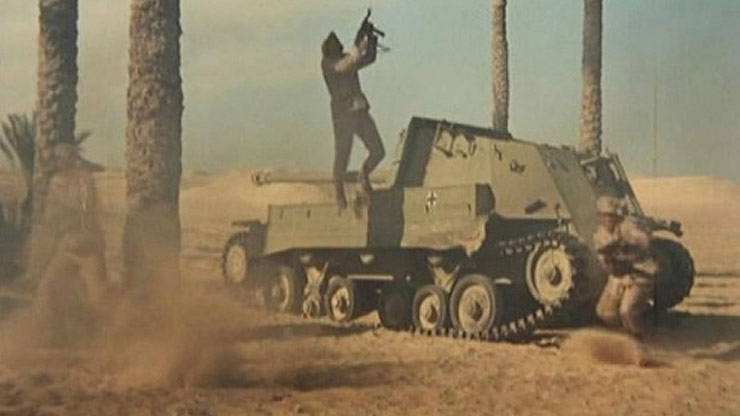 He’s nursed back to health by the daughter of a local sheik, with whom he has an affair (the daughter, not the sheik).  When he’s well enough, the Captain wants to return to the oasis to find out what happened to his men, but the sheik informs him that everyone – German and British – perished during the battle, and that now the locals avoid the oasis as cursed ground.  Accepting the sheik’s word, the Captain returns to the British army and spends two more years at war.  Returning after the end of hostilities, he finds that the sheik’s daughter has perished giving birth to his son.  Chagrined, he takes the boy with him back to the UK and somehow ends up in Italy (at least I think it’s Italy), where he tells everyone that his son is adopted.

You know what? I have no idea why I’m writing this out in such detail. Maybe because of the effort it took me to piece this together out of the convoluted narrative. It really doesn’t deserve that level of interest, so here’s the abbreviated version:

First, two women make a 15 hour drive to the oasis for no good reason.  They find old Nazi stuff and complain to each other in terrible dubbing. The dubbing is so atrocious that they’re attacked by zombies. Well – I assume they’re zombies. It’s really just a pair of hands in the sand. 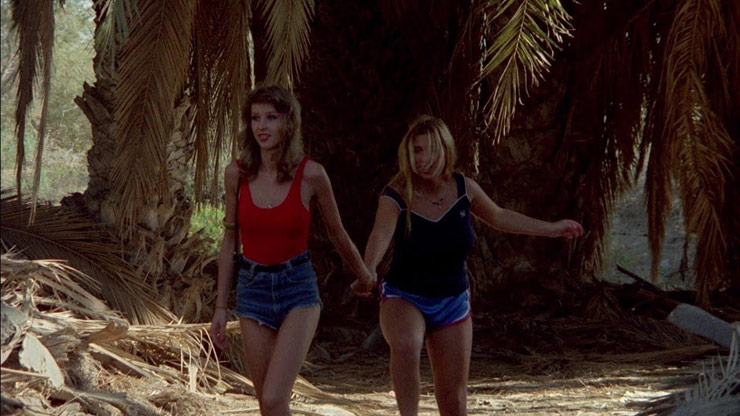 Then it’s WWII and an Afrika Korps patrol carrying a fortune in gold is ambushed by a British patrol at an oasis in the desert.  Don’t ask which one – the sand all looks the same anyway.

Back in the “present” (1981) the only survivor – a British Captain – is approached by a former German officer named Kurt with an offer.  The plan is to go to the oasis, using the Brit’s maps, to get the gold.  Why the British Captain didn’t go looking for it before is never explained, but maybe he’s afraid of being killed by Germans.  If so, he has good reason, because he’s betrayed by Kurt with a poison that kills him in about 2 seconds.

The British Captain’s son (from the affair with a sheik’s daughter after the oasis slaughter – what happens in generic desert country, stays in generic desert country) receives notice of his father’s death and travels to… Spain, maybe? Actually, I think I heard someone say Tripoli, so let’s say Libya.  There he reads his father’s journal explaining all that stuff about the desert, Nazis, gold, sheik’s daughter hanky panky, etc. 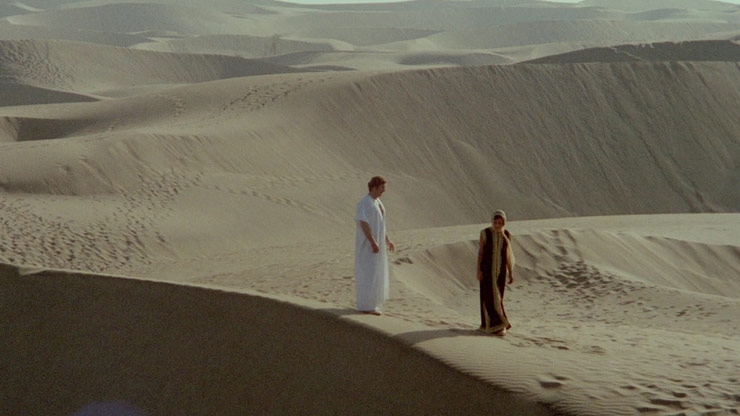 He convinces a number of school mates to join him on the journey to (insert North African desert country here) to find the gold.  Oh, and his grandfather the sheik, his mother having died in childbirth.  See, it’s really a story about this one kid’s journey of self-enlightenment.  He’s learning who he really is!  There’s subtext, really!

Meanwhile, Kurt and his crew manage to find the Oasis and set up camp, only to be attacked by the zombies. This is the first extended sequence with the zombies and they appear to have had plastic bags melted over their faces. There’s one prop dummy head that’s a little better done, but it’s obviously just the head – maybe the rest got burned when they melted the plastic bags on the other guys. 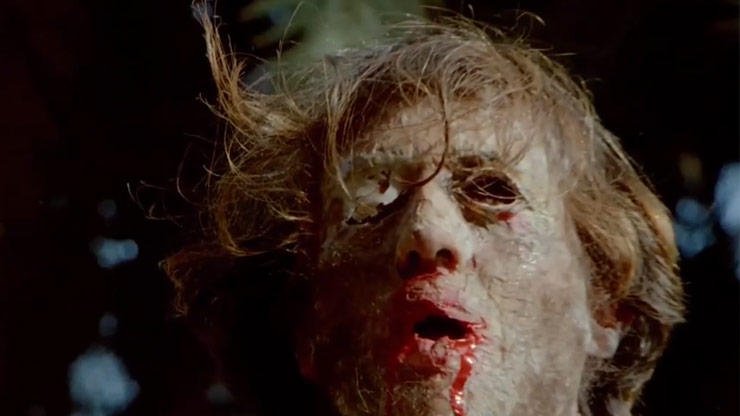 Back to the disaffected youth – they’re doing the tourist thing in the markets and stepping over Muslims during prayers. Along the way they come across a film crew with a professor and a woman who was willing to get naked on camera with the moody guy who looks about twelve. And Kurt. Poor Kurt.

Kurt has managed to escape the carnage, but not without being bitten. He stumbles around, raves on about the walking dead and screams a lot before dying suddenly in a pile of straw. The kid immediately recognizes him and knows him as the guy that killed his father, despite never seeing him before and Kurt committing the crime with no one around. Then the locals burn Kurt’s body in the convenient pile of straw. 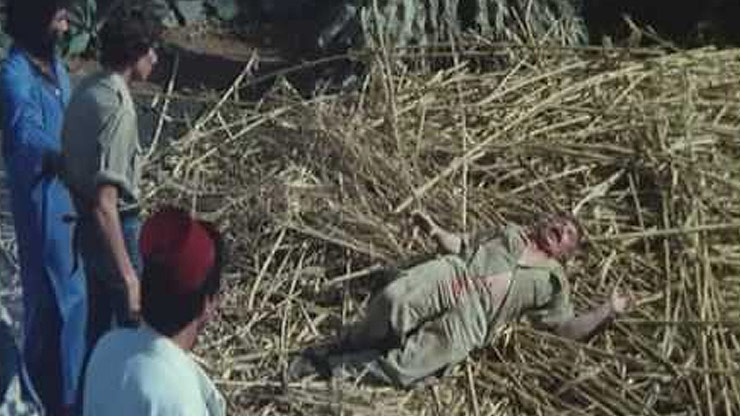 The kids find the Sheik, who has managed to steal Omar Sharif’s mustache. He gives them directions to the Oasis, I think because he finds the kids annoying.

The kids find the Oasis and also the film crew from earlier. It’s a hidden oasis, 15 hours from anywhere, but people keep stumbling across it somehow – it must be on the way to a Starbucks or something. Anyway, the professor and Maryanne – er – the girl who doesn’t mind getting naked, are still alive. The kids manage to talk them into staying and looking for the gold and soon everyone is smiling and having a good time while digging graves for the cameraman and sound guy.

I wish I was kidding.

Inevitably the zombies arrive again, with some of the most effective shots of the movie. They’re… dammit, they’re almost good. It’s the same 5 or 6 zombies coming up over sand dunes several times, but they’re shot well and it’s pretty creepy. Unfortunately, it’s like finding a piece of hamburger in a crap sandwich – it somehow makes everything else worse by showing you what you COULD be eating. 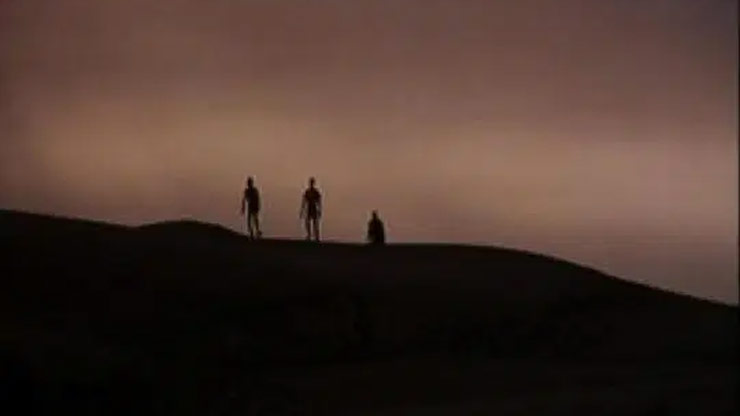 The kids try to fight off the zombies with fire – leading to the second most awesome line in the movie, that opening quote about the Molotov cocktails. What kind of school were these kids going to, anyway? It all goes horribly wrong and only the lead kid and his girlfriend manage to make it to sunrise (when the zombies go away) and then fall unconscious. The Sheik shows up – and his mustache has mysteriously gotten bigger, as if it were feeding on him somehow. Anyway, the Sheik finds them and says “did you find what you were looking for?” Seems kind of dickish to me.

And then the closing line, the cherry on this shit sundae, “I mainly found myself.” 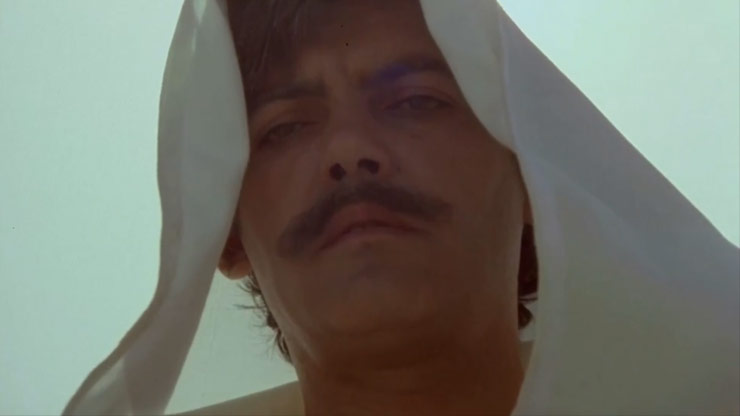 The Bottom Line
I watched Oasis of the Zombies it so you don’t have to. Now go watch Shock Waves instead. Or even that OTHER Italian Nazi Zombie movie, Zombie Lake. It’s terrible too, but better than this.