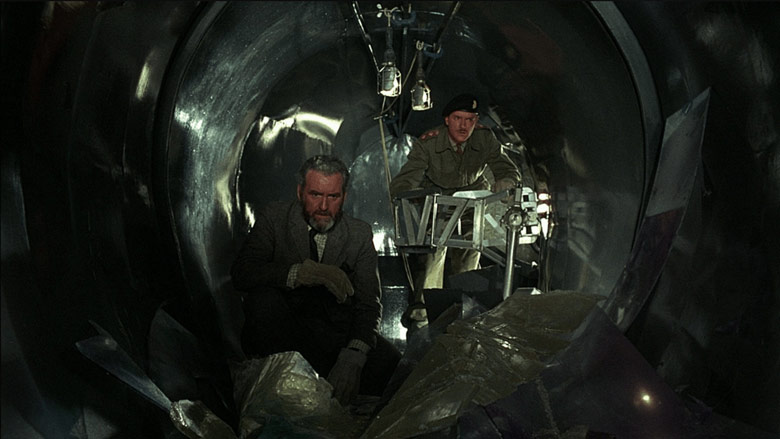 “You realize what you are implying? That we owe our human condition here to the intervention of insects. “

This is another one of those movies that I remember fondly from my childhood. It was first watched – as so many older sci-fi and horror films were – from my grandmother’s couch on a rainy Saturday afternoon. For the longest time I couldn’t even remember the name, just the vague plot of a spaceship found buried in the earth during a subway expansion. I’m almost certain I saw it under the Five Million Years title, as that seems to have been the US release title.

I do remember it creeping the hell out of me as a kid. 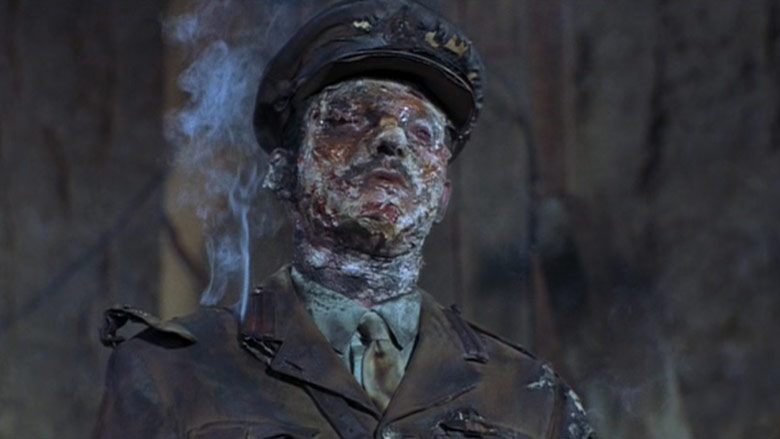 Many years later I read a Stephen King novel about an ancient spaceship buried in the forest that comes to influence and, eventually, to control many of the people in a small Maine town. Hang on, I thought, this sounds familiar… The book was The Tommyknockers,  and while it obviously has other influences – Lovecraft’s “The Colour Out of Space” among them –  it was the nods to Quatermass and the Pit that stuck out to me the most, and I remember thinking that I wanted to track down the movie that I had seen so long ago.

Unfortunately, none of my local video stores had it – I’m not even sure it was ever released on VHS, at least not in the 1980’s. To be fair, I didn’t really know the name of the movie at that point either, so even if it was available it’s likely I wouldn’t have found it. It wasn’t until many years later that I came across a DVD copy of Quatermass and the Pit. The name meant very little to me – I was only vaguely aware of the Quatermass name from the final BBC serial when it was broadcast on PBS – but the plot sounded familiar, and there was something about the monster on the (otherwise uninspiring) cover that also rang a bell. So I took a chance and picked it up – and got to relive a piece of my childhood. 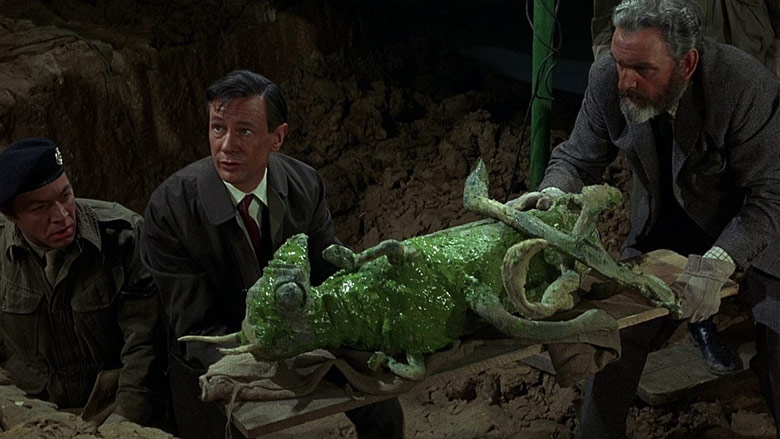 It’s since become one of my favorites and I try and watch it every Halloween season.

The Medium
For the longest time my only copy of the movie was the Anchor Bay “The Hammer Collection” release. It’s a double-sided DVD with the movie on one side and most of the extras on the other. It had become difficult to find in recent years, however, and I always wanted a Blu-ray release. (One I could watch on my region-locked Blu-ray player, anyway.)

So when I saw the Scream Factory release this past Tuesday I jumped at it – and the chance to watch it again for this Fear Flashback. The picture quality is excellent, the result of a recent restoration, with mostly sharp detail, strong colors and a pleasing grain. There’s a long list of extras that mostly boil down to 3 commentary tracks and a bunch of interviews. I’m very happy with the upgrade and heartily recommend this version if you’re thinking of picking it up.

The Movie
Quatermass and the Pit is an adaptation of a 1958 BBC serial of the same name. The adaptation was done by the author of the original, Nigel Kneale – a name that’s synonymous with quality British sci-fi. I actually have a copy of the original but I’ve only watched the first half hour or so. I should give it another go. This is also the third of what would ultimately be four different Quatermass stories – though it’s not really necessary to have seen any of the others.

At a place called Hobbs End in London workers adding an extension to a tube (subway) station uncover a number of bones, the fossilized remains of an early form of hominid. Scientists are brought in to preserve the specimens (and get the site cleared as soon as possible so construction can continue). In the process of digging out specimens they find some kind of metallic device that is assumed to be an unexploded bomb from the blitz. The military is brought in, but they can’t determine the nature of the thing – it’s certainly not like any bomb they’ve ever seen and doesn’t appear to be made of any type of steel (their magnetic listening devices won’t stick). As they unearth more of the strangely shaped object they also find another skull embedded in the clay within one of the hollows of the ship. As they’ve dated the hominid skeletons to roughly five million years ago the question becomes: what is this device and how did it get there? 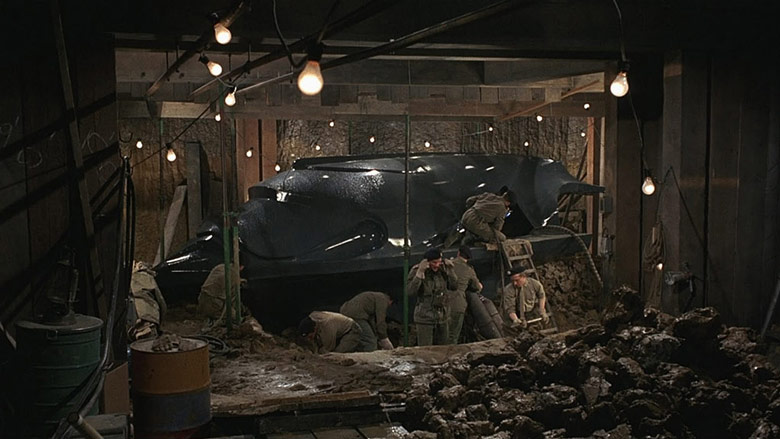 We’re introduced to the title character of Professor Bernard Quatermass (Andrew Kier, Blood From the Mummy’s Tomb) when the military is brought in. He’s a scientist who’s in the middle of having his moon rocket project co-opted by the military. For someone who originally had no experience of the character I really liked this touch – it gives a sense of  Quatermass having his own story, separate from the events of the film. In a few lines you understand he is a brilliant scientist, that he has problems with science being used for military purposes, and that he has at least a little bit of political influence.

His foil in the military is Colonel Breen, a man who isn’t completely inflexible, but certainly believes the military knows what’s right. He’s portrayed by Julian Glover who you may remember as General Veers in The Empire Strikes Back or Walter Donovan in Indiana Jones and the Last Crusade. 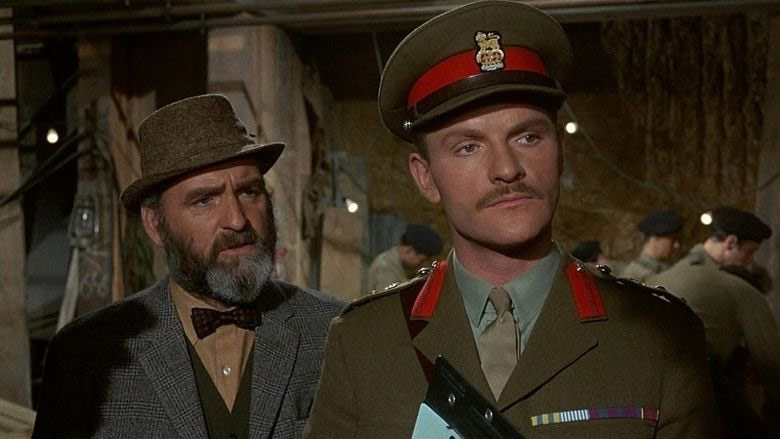 Breen, faced with an out-of-context problem, falls back on his experience and decides that the device is a German propaganda weapon from WWII. Quatermass and his allies – the anthropologist Roney (James Donald, The Great Escape) who began the dig and his assistant Barbara (Barbara Shelley, Village of the Damned) – begin to believe it’s a spaceship, possibly from Mars, possibly on a genetic colonization mission.

And it may not be completely dead.

The military will not be denied, however, and you get the distinct impression that it’s not just Quatermass that has a low opinion of both the military and the government – Kneale doesn’t seem to have a lot of trust in them either. The blind insistence on a conventional explanation leads, predictably, to disaster – and the final acts of the film devolve into scenes of psychic mobs, under the influence of the ship, hunting down unaffected individuals while a horrific vision of their alien masters floats above scenes of destruction.

If there’s a down side to the movie it’s that the effects are very dated. They were probably pretty low-tech and low-budget even when they came out, and it compares very unfavorably with 2001: a Space Odyssey, which came out the following year (albeit with a significantly larger budget). It has the unfortunate effect of leaving us amused when the aliens are first revealed, when instead we should probably be repulsed and dismayed. 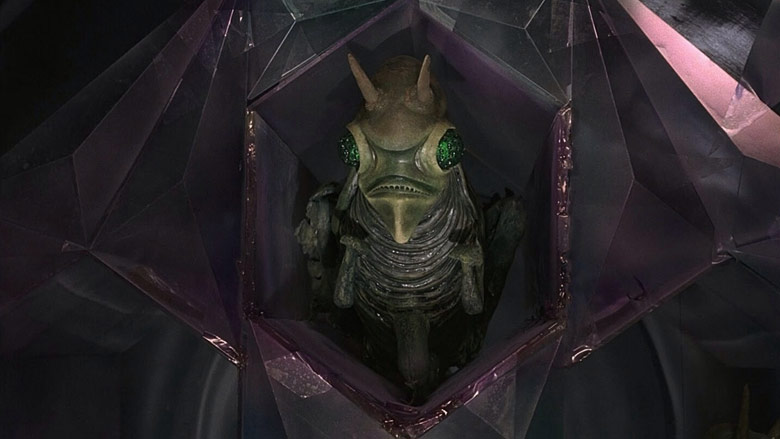 That being said, there’s a certain mood that the movie works hard to create – a growing sense of unease – that still works very well. The acting is quite good, with only a few moments of over-the-top hysteria. Keir and Shelley are great, as is Glover – though his Breen has only hints of a depth that’s quickly subsumed by pure, bull-headed antagonism. Some of the other effects are done well, especially during a sequence in which a drill operator is ‘hounded’ by various telekinetic phenomena, and the climactic sequence involving a crane and a hovering ‘vision’ of an alien monstrosity is still both exciting and chilling. 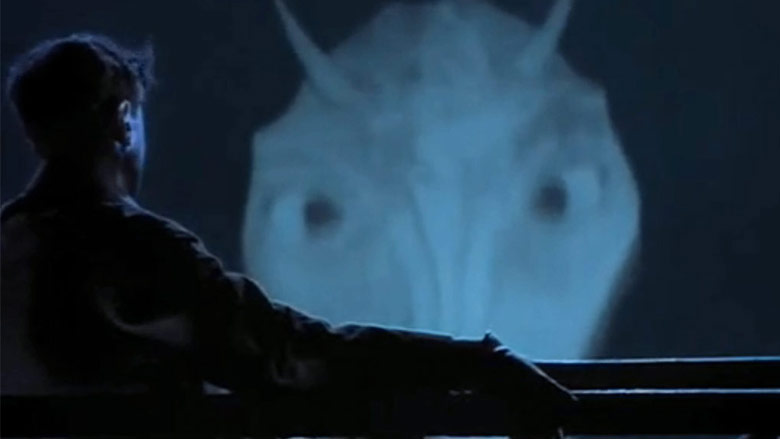 The cinematography, editing and – particularly – the pacing are great. It almost feels like a more modern film in its terse dialogue and rapid plot development. The colors are vibrant and clear, as one would expect of a Hammer film, and the set design is top notch.

The Bottom Line
I think Quatermass and the Pit is still pretty effective – especially for being made on a shoestring in 1967. It has some genuinely creepy moments and the non-creature effects are done quite well. The limited amount of extras are shot skillfully as things begin to go truly pear-shaped towards the end. There are lots of issues of course – nobody likes to see the Styrofoam ‘grain’ on the rocks that are being thrown around by the ‘psychic awakening.’ However, these are more than made up for in the creepy set-pieces: the exploration of the abandoned housing, the poor contractor chased by ‘demons,’ the whole apocalyptic end sequence.

I’d love to see this movie remade today. I think it could be quite an effective action/horror movie and the ideas still have some depths that haven’t been completely plumbed in the intervening years. As it is, this is a great piece of classic British sci-fi/horror and I highly recommend giving it a look if you haven’t seen it.