I’ve mentioned Shock Waves a couple of times in the last month or so. As I’m a bit behind this week I thought I’d resurrect (see what I did there) this review for SAW. 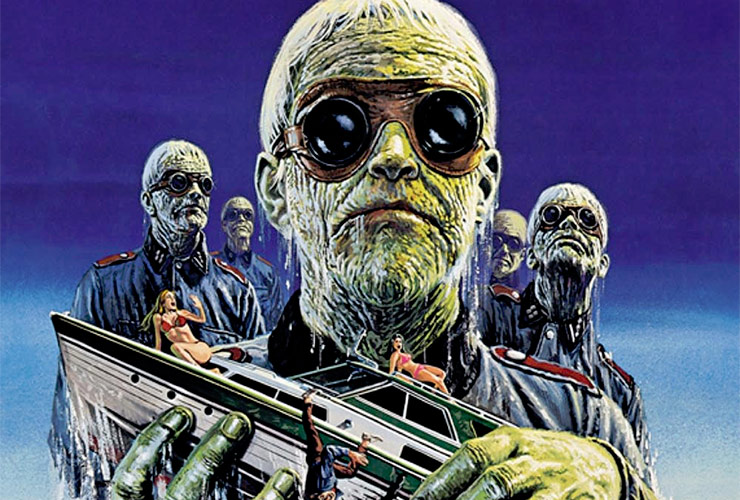 This is the best Nazi zombie movie ever made.

A bold claim, I know. I’ve seen more than a few Nazi zombie films, but I haven’t seen them all. How can I judge this the best? Well, for one thing, it is actually pretty creepy at times – I’m a fan of Dead Snow as well, but that’s not a scary movie. Zombie Lake is frightening, but mostly because of how crappy it is, not the zombies (“AAAAGGGHHH! He got green makeup on me!  ARRRGGHHH!!”). Oasis of the Zombies? The less said, the better (though I have an old review of that piece of cinematic excrement that I should post sometime.) For another, it stars Peter Fucking Cushing. That’s right – the same year he was Moffing it up in Star Wars, he was putting on a German accent and fake scar for this little beauty.

I have yet to see EVERY Nazi zombie film, so I’m always ready to change my opinion of anything ups the ante. There are even a few other films with Nazi zombies in them, but either they’re not the focus or the movie is terrible. (Like Revenge of the Zombies, which features another Shock Waves cast member, John Carradine.)

Shock Waves is one of those movies that I had heard about, but never gotten a chance to see when I was younger. None of my local video stores had a copy when it was The Time of VHS, though I saw trailers for it on some of my horror movie rentals. (“Shock Waves! The deep end of horror!”) The trailer pushes a certain exploitation feel and I got a weird impression that it was a low-budget gore-fest, something on the same level as Italian zombie cheapies like Burial Ground.

Because the original negative has mysteriously disappeared (what DON’T THEY WANT US TO SEE??!!) it took 20 years for a DVD to be made available (produced from the director’s personal print). I didn’t have huge expectations – I’d heard Zombie Lake was awesome, but I’m no longer friends with that guy. So I was pleasantly surprised. Yeah, it’s a low budget ($200,000) film, but it’s no gore-fest – there’s surprisingly little in the way of gore. It’s also a fairly effective, atmospheric horror movie with characters that are a little above your usual cookie-cutter victims – and of course it’s got both Carradine and Cushing, and the movie uses their brief appearances to good effect.

The Medium
The copy I have is the Blue Underground release form 2014. The Blu-ray disk includes commentary by director Ken Weiderhorn, makeup artist Alan Ormsby (of Children Shouldn’t Play With Dead Things and Dead of Night) and Fred Olen Ray (because why not), and the commentary is pretty fun and worth a listen. The picture quality is, to be fair, about as good as you can get given that it’s a blown-up 16mm print – and not from the original negative. It’s significantly better than previous DVD releases, but it’s never going to be a cinematic show piece.

Random Art Insert
Here’s a quick sketch I did of a scene from the film, just ’cause. 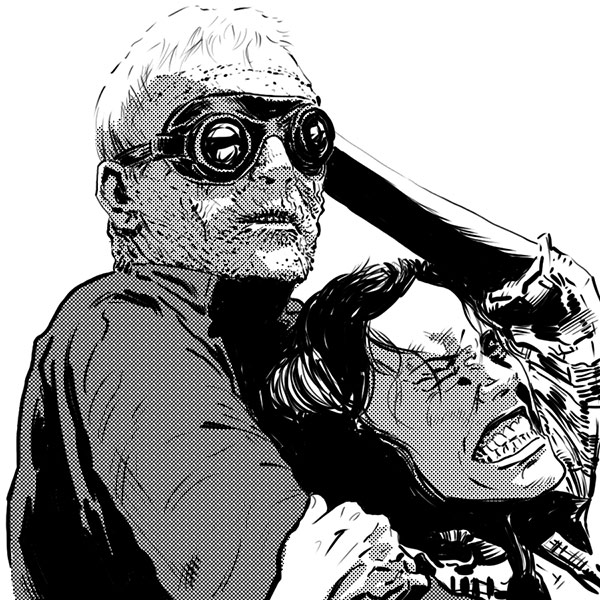 The Movie
The movie starts off with a voice-over talking about special Nazi squads that were never captured and “fought with their bare hands.” I don’t usually like voice-overs, but this sort of reminds me of In Search Of and I let it pass.

After that we get a scene where a father and son on a fishing boat rescue a girl who has been floating in a small dinghy on the open ocean. She’s incoherent and dehydrated and can barely interact with her rescuers. Another voice over (I know), apparently by the girl, talks about how she’s only just now remembering what happened. I’m guessing it’s nothing good.

Then we’re introduced to a group of vacationers on some sort of Caribbean cruise in a dilapidated boat that’s constantly breaking down. The captain is John Carradine – doing his ‘crotchety old man’ routine. The young first mate sporting the awesome 70’s ‘stache is apparently the kid from Flipper, if that matters. The girl in the bikini is Brooke Adams, who you might have seen in the 1978 remake of Invasion of the Body Snatchers. 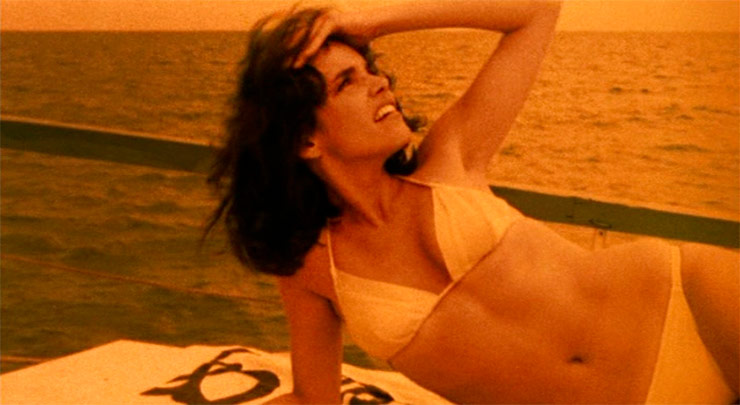 I have a bit of a crush on Brooke Adams.

Anyway, there’s some kind of confusing event that turns the sky orange. I say confusing, because later on the captain explains it away as something to do with cold currents and hot sky combining to bring stuff up from the depths. I think I missed something. (Actually, it’s the movie that’s missing something. According to the commentary, a scene was shot with in which debris floated up. There was also a corpse, created by Ormsby, but the footage was unusable.) Unfortunately, it throws you out of the narrative for a moment, as you try and figure out what they’re talking about.

Later that night they run into a wrecked ship, causing them to have to evacuate everyone to a nearby island. On the island they find an abandoned hotel and a former Nazi officer (Cushing) who invites them all to leave – or get shot. 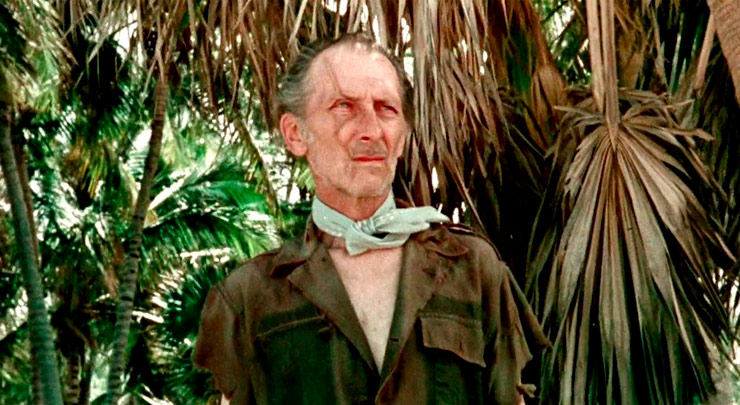 Meanwhile, the earlier event has apparently thrown up a ship full of… NAZI  ZOMBIES! The Nazi officer explains that they’re the results of experiments to create the perfect soldier – and that these are designed for underwater assaults. They proved unreliable (really?) and, as the war wound down Cushing brought them out here and sunk the ship they were in. He’s watched over them ever since. Now they’re out – and in surprisingly good condition, given how many years have passed while they were underwater.

The zombie designs are really nicely done, especially for such a low budget production – pasty, swollen skin, eaten away slightly, with SS uniforms and smoked-glass goggles. They don’t make a noise as they appear – usually rising from the water in synchronized formation. Some of the creepiest moments of the film are of the zombies lying quietly in the water, waiting. The director uses them sparingly and manages to make it look like there are dozens of them. They also seem to use tactics, something you don’t find in most zombie movies. One will rise out of the water near a victim, driving them into the waiting arms of the rest. 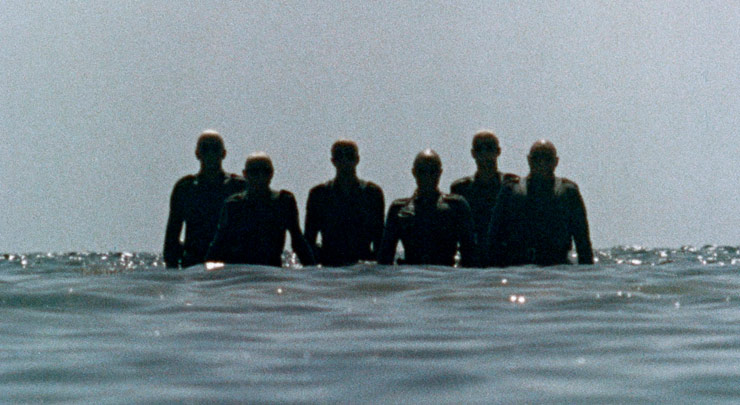 As I mentioned earlier, there’s very little gore for a zombie move made post-Night of the Living Dead. The zombies seem to prefer to drown their victims – one even going so far as to use an aquarium. There’s a little bit of rotting going on with the zombies, but it’s pale and the only real blood I can remember involves one of the cast getting his hand jammed in a door.

The zombies do have one weakness – if you can pull off their goggles they seem to de-animate after stumbling around a bit. However, this seems to only work during the day – one zombie who has his goggles removed and begins to rot a bit shows up later, after night has passed. 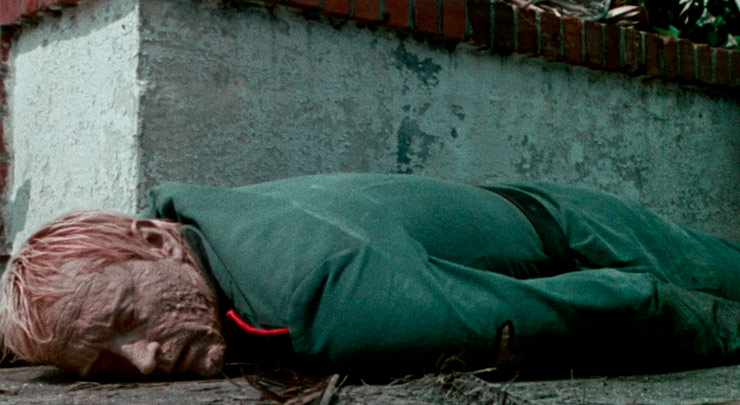 Most of the attacks are quick, surprise assault sorts of things. Lunges from deep or dark water, with plenty of tense buildup. There are a few longer chase sequences, though, including one where Brooke Adams flees a zombie who just keeps coming, even through a wooden fence. There’s a particularly tense scene with a character trapped in a half-filled swimming pool. You know there’s one of the zombies hiding in the water – and so does the character. Other zombies circle the edges, and I was reminded of a deer being circled by wolves.

The acting is decent, especially given how low-budget the production is. Having veterans like Cushing and Carradine help give a level of respectability to the proceedings. They only had the actors for a few days apiece, but they sprinkle the appearances (Carradine in the first half, Cushing the second) so that there’s always a scene with one of the more famous faces every 5 minutes or so.

The movie is surprisingly moody and tense in spots. The zombies are menacing, especially in shots where they stand in the distance, then slowly turn as one and disappear beneath the waves. There’s a certain feel to the film that I tend to associate more with Italian horror films from that era, and I don’t mean that in a bad way. It’s a sort of rawness that makes everything creepier than modern, slicker films. The score helps a lot, with weird, atonal sequences and deep, off-kilter sounds. The first time I saw the movie I thought the score was a little annoying, but this time around I found it very effective – it actually reminds me a lot of the score from Forbidden Planet. 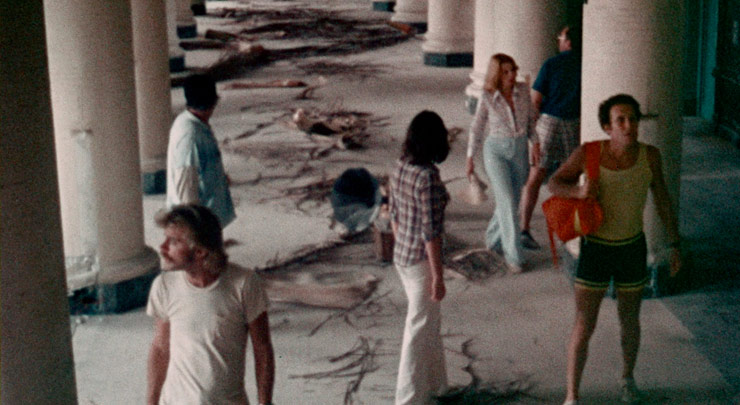 As is zombie movie tradition, it’s the problematic behavior of individuals that causes everything to fall apart. We’ve got the selfish, loud asshole who leaves Brooke behind and pays for it. We’ve got the muscle-guy (who isn’t played as a jerk, which was refreshing) who can’t control his claustrophobia. Even our nominal heroes – the first mate and Brooke – leave one of the characters, blinded, to fend for herself while they hide.

In the end, their only option is to try and escape the island in a small boat – but we already know how that ends, given we see the sole survivor at the beginning of the movie. At that point it’s no longer about who will survive, but how will they die?

The Bottom Line
Shock Waves is a 1970’s horror film made on a budget of about $200,000. It’s not high art cinema. It IS a surprisingly atmospheric horror movie, with above average script and acting, some decent makeup effects and a couple of horror’s all-time greatest actors. Yeah, they’re slumming it a little, but they class it up, rather than the movie dragging them down. It’s also got some of the best and spookiest zombie Nazis you’ll find on screen. Well worth checking out if you get the chance.