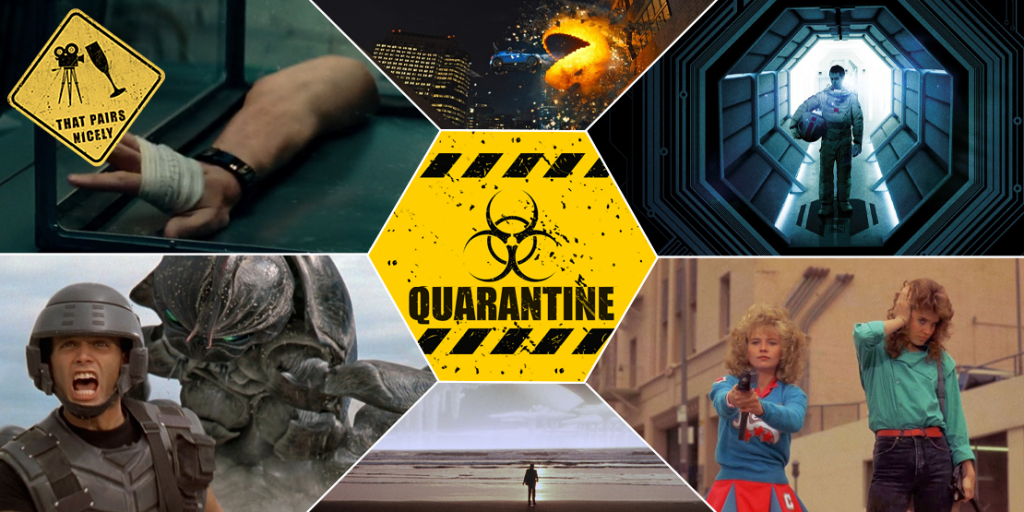 Here at ScreenAge Wasteland, we’ve selected six films that you should watch during quarantine if you enjoy some good old science-fiction.

Night of the Comet | Vincent Kane

Night of the Living Dead meets Girls Just Want to Have Fun? Campy sci-fi horror goodness that’s a fun time and feels like it was made for the drive-in era. If you’re a fan of Return of the Living Dead and Night of the Creeps, then you will love this. It’s an MTV 80’s movie through and through with its bright clothes, big hair, and pop soundtrack. The world prepares to watch a rare comet pass by in the night. Why is it a big deal? Because the last time this happened, it was when dinosaurs roamed the earth. Uh oh. After it passes, it turns most of the population to dust while leaving others as zombies. No, not your Romero zombies but the kind that are still a version of their humanselves. Just all killery and what not. Some survive untouched and must survive this fallout. Reggie (Catherine Mary Stewart) and Sam (Kelli Maroney) are sister survivors that do a fun job of carrying the film with their big hair and spunky attitudes.

If you’re looking for spectacle, you might as well move on to the next recommendation. The Quiet Earth is like I Am Legend without the murderous vampire zombie cannibal … things. Most of The Quiet Earth consists of a character study. It drops our main character Zac Hobson (Bruno Lawrence) into a world where he is suddenly the last man alive and then lets us observe him as he slowly unravels. The film raises questions about social isolation, love, and technology. And it’s got an ending that will stick with you for days afterward. I highly recommend it.

Moon was one of those films that come out of nowhere and gobsmacked me. I hadn’t heard anything about it and as a result it consistently entertained and surprised me in a way that it might not have if I’d had it spoiled. So I’m going to be necessarily vague, just in case you haven’t seen it yet. Sam (Sam Rockwell) is getting short on his isolated work stretch on the far side of the moon. It’s a long time to be isolated, with only sporadic communications from home and a robot named GERTY (Kevin Spacey) for companionship. It’s no wonder he’s slipping a little, maybe seeing things, maybe not as attentive as he should be. And when his slow reflexes and hallucinations lead to a crash things start to get interesting. REALLY interesting. Because despite everything he’s been told, Sam is NOT alone. Just a really good, interesting film with a standout performance by Rockwell. And it’s still good when you know the plot, FYI. In fact, I think I might watch it again…

Starship Troopers was always a favourite of mine as a teenager. Aliens, explosions, brainless entertainment and Denise Richards. What’s not to like. It wasn’t until a rewatch a few years ago that I saw it as a completely different movie. Through (slightly) more mature eyes it comes across as part scathing political satire, part action-comedy. But that didn’t make it any less enjoyable. The story follows a group of young soldiers enlisted to fight in the ‘bug war’. It starts off as a kooky high school drama with love triangles and other tropes. Once the troops go to war it’s all-out action, with lots of great set pieces and some fun characters to invest in. If you’ve never seen Starship Troopers, or haven’t watched it in a long time, a viewing comes highly recommended.

The movie with Adam Sandler fighting pixelated arcade characters and Kevin James as POTUS? Yeah, I know, it probably isn’t at the top of most science-fiction watchlists, but I had a lot of fun watching this movie. Could this movie have been better with a different cast and a slight script adjustment? Yes. However, seeing a giant Pac-Man attempt to eat everyone is still awesome! The special effects are great, and there’s some really good ideas being thrown around here. Not everything sticks, and Sandler isn’t exactly doing anything new here, but that doesn’t diminish the enjoyment factor. The ending may be a bit cringey (looking at Josh Gad’s love interest in particular), but overall it’s some mindless entertainment. Chris Columbus (Home Alone, Harry Potter) also directed it, so c’mon, give it a chance!

This film got shit on big time when it was dropped by Paramount and moved to Netflix. But it isn’t really all that bad of a film (same goes for Mute). It has a solid cast and a really interesting premise to it overall. I liked what they tried to do with it in general, even if overall its a little generic (crew goes to space and shit goes wrong fast). The film was based on God Particle, which had the main plot of the space station crew, but was unconnected to Cloverfield. During production J.J. Abrams figured out a way to tweak it and tie it to the franchise, the same as they did with the previous film, 10 Cloverfield Lane. Say what you want about Abrams but he is at least trying to create a new franchise in a world of remakes and reboots (some that he’s done himself). So I say you sit back, relax and enjoy the ride.

What science-fiction films have you recently watched?