Everyone has a favorite movie monster or three, right? Whether it’s classics like Dracula or the Wolfman, sci-fi perils like the Alien or Godzilla, or even more mundane creatures like the shark in Jaws or the ‘gators in Crawl. Monsters come in all shapes and sizes. Darth Vader totally counts as a monster (especially when I first saw him as a kid), as does Anton Chigurh from No Country for Old Men.

This series is about our favorite things that go bump in the night, our dearest creepy crawlies, our fondest nightmares. Are they among your favorites as well? Or is there something still more monstrous that tickles your fancy? 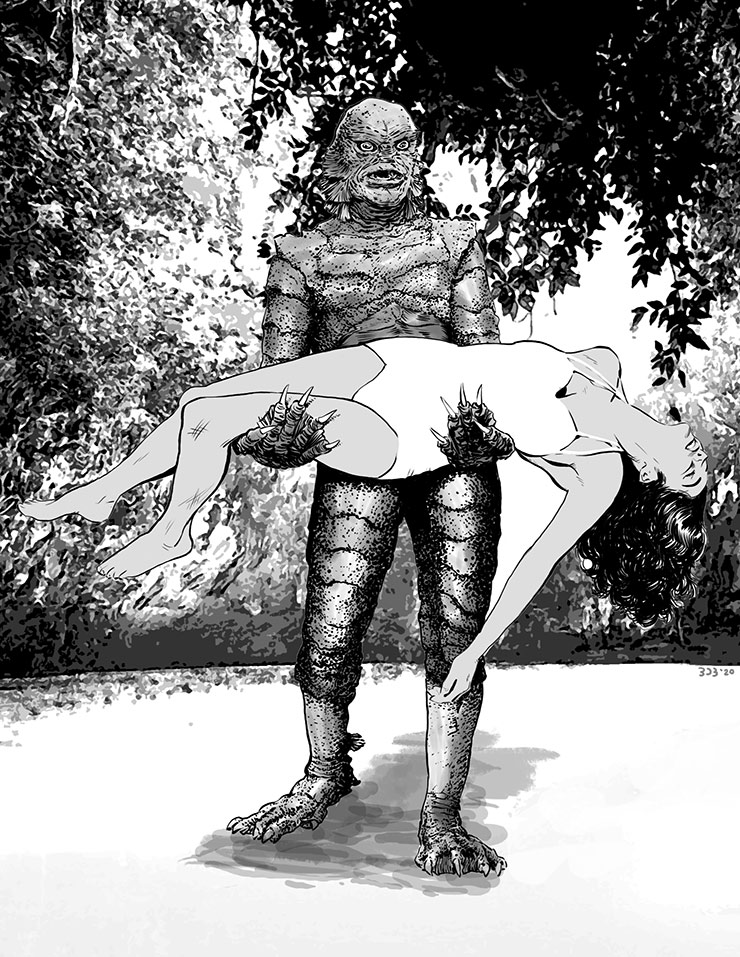 The Creature has always been my favorite of the Universal monsters. Bride of Frankenstein is my favorite MOVIE from Universal, but the gill-man is my thrill-man when it comes to monster designs. It also made me briefly interested in paleontology as a kid (I loved dinosaurs, but had no idea you could be a scientist that dug that stuff up).

The first time I got to see Creature was a bit of an experience. The channel it was shown on was able to broadcast it in 3-D. We spent a lot of time getting ready, with my grandmother tweaking the TV settings and us sitting about five inches away from the set with our blue-and-red glasses on. I was sold from that very first scaly hand reaching out of the water (and the screen). I’m pretty sure I’d seen a few monster movies by that point, but nothing quite like the Creature, with his moving gills, scaly skin and odd longing for that girl in the white bathing suit. Director Jack Arnold (The Incredible Shrinking Man) knew that he had something special with that mask, and gave us plenty of closeups (pretty effective in 3d, even in black and white).

That incredible design was created by Disney animator Millicent Patrick (she also created the Chernabog in the “Night on Bald Mountain” sequence of Fantasia, another great monster). It’s a shame I never knew that as a kid, because her boss – Bud Westmore – hogged all the credit.

I don’t know that I was ever really scared by the Creature as a kid. I always just thought he was cool looking and misunderstood. Not that I’d want to meet him at the lakeshore in the dark, though! He really made an impression and engendered a love of cinematic humanoid sea creatures good (The Monster Squad) and bad (Creature from the Haunted Sea) and great (The Shape of Water). That fascination continues to this day (see my Sea Creature Double Feature from last October).

The Creature from the Black Lagoon is one of my favorite monsters. How about you?