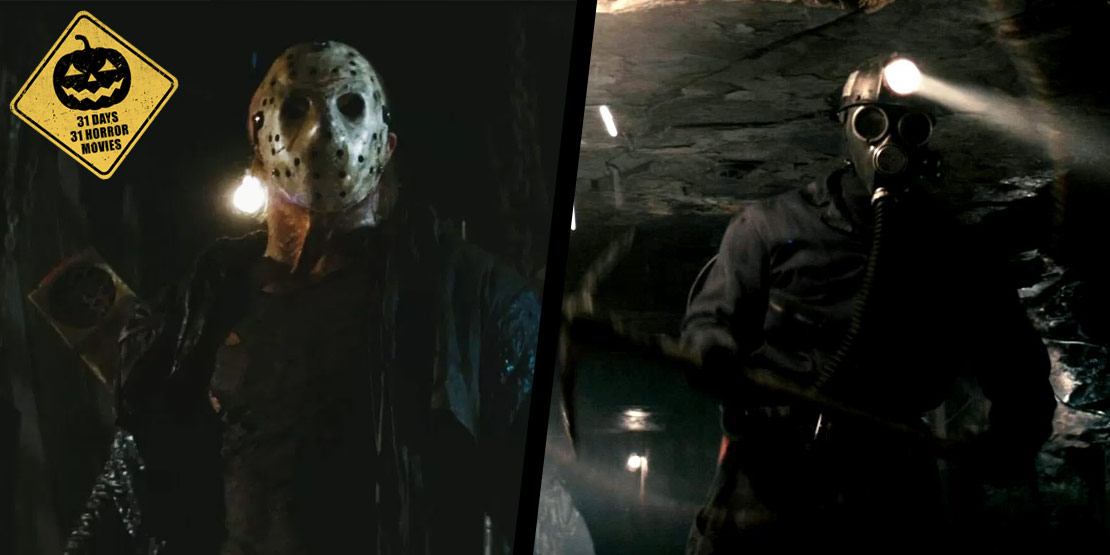 When someone says “guilty pleasure” I have a few things I immediately think of. Shockwaves,  because low-budget Nazi zombies are best Nazi zombies, Moxie, because a Maine drink should be both delicious and horrible, and Supernatural. It’s a CW show about a couple of brothers hunting monsters and it’s been on an improbable fifteen seasons (currently in its last). If anything should make you question my judgment (and there are lots of things), it’s this. I love Supernatural. God help me, I do.

Part of that – or maybe most of it – is due to the main characters, Sam and Dean Winchester. Portrayed for all of those 15 seasons by Jared Padalecki and Jensen Ackles respectively. They’ve managed to keep my interest through good seasons and bad by having a great on-screen chemistry, even when one of them is trying to bring the other back from the dead for what seems like the tenth time.

Anyway. I like the show, I like the actors, and now that their long run is coming to an end I find myself hoping they’ll make good in some other property. I know Padalecki is already cast as the lead in the new Walker, Texas Ranger. No word on Ackles next step. However I thought this might be a good time to look back on their most high-profile non Supernatural roles.

The Mediums
I’ve got a DVR’d copy of Friday from a previous Halloween. It’s only streaming if you’ve got a subscription on a service called Fubo right now, though you can rent it at all the usual places. For My Bloody Valentine I’ve got a Blu-ray I picked up for $1 at Goodwill. Picture quality on both are good, and the Valentine Blu has a decent number of extras. It’s streaming on Starz, and is for rent or sale everywhere else.

Friday the 13th (2009)
The first twenty or so minutes of the remake of Friday the 13th are pretty darn near perfect – it feels and looks like a Friday the 13th movie should. After a super condensed version of the ending of the original (featuring Deep Space 9‘s Nana Visitor as Mrs. Voorhees) we’re introduced the usual group of horny young people out in the woods where they shouldn’t be. There are the nods to previous Friday films (including a capsule retelling of the first film), there are even little details that indicates there’ll be a bit of humor, like the collection of counselor whistles in Jason’s old room. Jason, when he appears, is terrifying – as he should be – and the kills are gruesome and plentiful. And complete. Our first crew is gone before we even know it. Good start, you might think, fast and furious. 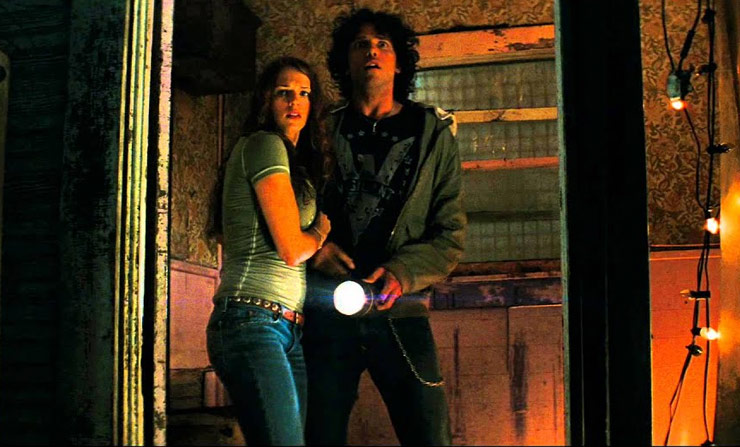 As the movie continues on, however, that first twenty or so minutes fades in the memory. It starts to slow, and then begins to drag. The next group of young people is nowhere near as likeable or even memorable, and even nominal hero Clay (Jared Padalecki) appears to comprised mainly of brooding looks and earnestness. Honestly, the only character I even really like is Chewie, probably because he actually sells the humor that falls flat when handled by anyone else. (Not that there’s much to begin with.)

There’s plenty of gore and nudity, but other than a few moments – the creepy old lady with the dog, Jason finding the hockey mask, the chase through the tunnels – everything feels a little tame, a little… boring. Maybe Jason isn’t in it enough or maybe I just don’t identify with the characters or… ah, I dunno. After a while it’s just another slasher movie, made well and with some nice details (killing a main character is always a good go-to), but it could be from any slasher series. They even manage to waste a perfectly good woodchipper – come on guys – even Tucker and Dale knew what to do with a woodchipper. 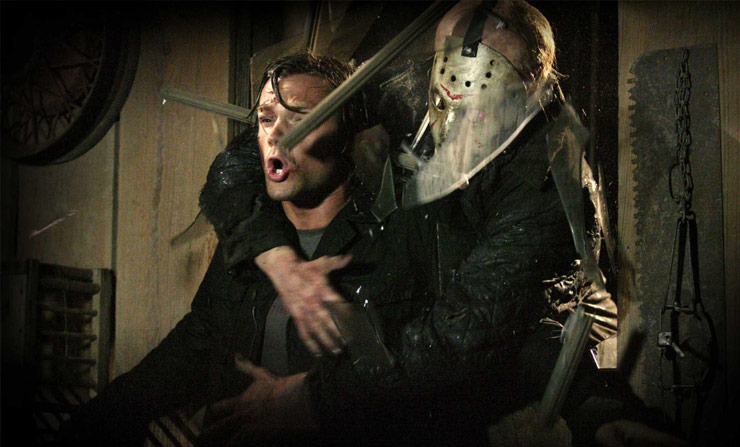 The Bottom Line
An inoffensive entry in the Friday the 13th series, the remake doesn’t do anything interesting enough or well enough to stick out.It’s not a complete waste of time, nor is it actively bad, but it just isn’t much fun. When I saw it in the theater I thought “meh,” and that’s pretty much my feeling every other time I’ve seen it. And “meh” won’t relaunch a franchise.

One year after a tragic explosion in the Hanniger coal mines the only survivor of that accident awakens in a hospital. Harry Warden lived by killing the other survivors to conserve air. He heads back to the mines, looking for the person he blames for the tragedy – Tom Hanniger (Jensen Ackles), the mine’s owner. He hacks up a lot of folks before finding Tom, but he’s shot before finishing the job. Harry stumbles off into the dark and is never found. Now it’s ten years later and Tom has finally returned to town. Has Harry returned as well? 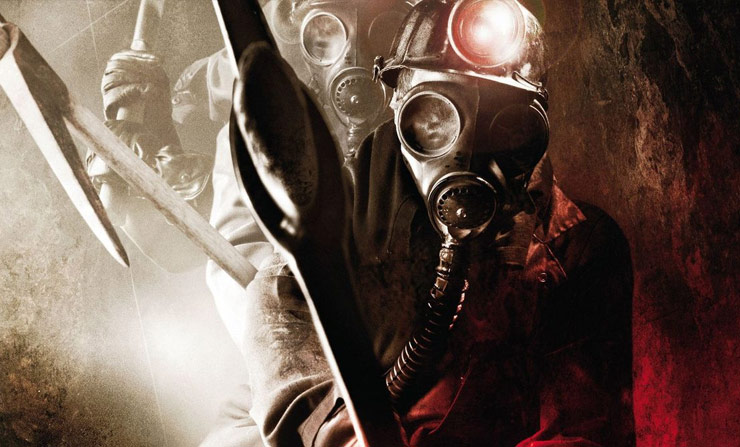 The thing Valentine has going for it that the Friday the 13th remake does not is that it knows how to have some fun. In some ways it reminds me of the better Dark Castle remakes of the 00’s, like Thirteen Ghosts or The House on Haunted Hill. There’s a definite sense of humor to the film, right from the early scenes with Sherriff Burke (Tom Atkins, which is a brilliant piece of casting) in the hospital. It’s just blood, corpses cut in half, limbs and other body parts strewn all over the place. They don’t linger on it, but it’s just so over the top that it’s a little like the filmmakers are winking at you. “Oh yeah,” it says, “we know why you came.” That continues through the whole movie, including a nude scene that just rolls right into a series of kills without the poor actress ever getting a chance to get dressed. It starts out titillating, becomes terrifying and ends up with you cheering the woman on and hoping she’s going to make it because she’s such a toughy.

Another way in which My Bloody Valentine succeeds over F13 is in the characters. To be fair, most of them get a lot more screen time than the poor fodder in Friday, but the actors are all better as well. I like Padalecki on Supernatural, but his Clay was a wet blanket. Jensen Ackles as Tom is troubled but likeable, even when he’s cowering from a killer or being kind of a douche to the sheriff. Event the antagonist – childhood rival, current day sheriff Axel Palmer – is allowed more depth than his “so you’re a jerk and you’re stepping out on your wife” background would normally allow in a slasher flick. And Tom was once his wife Sarah’s (Jaime King) boyfriend, so there’d be plenty of tension between them already even if Tom wasn’t selling the mine to developers.

And just because there’s a little Peyton Place soap-opera shenanigans going on doesn’t mean there isn’t some gore. There is. A lot. It’s a 3D film, so we get a lot of blood, weapons and body parts thrown at the camera, but the filmmakers are aware it’ll be seen in 2d as well, so we don’t get too many lingering shots of eyeballs right in the camera lens (though we do get some of that). The Miner is a fantastic figure of menace, even if he’s not as iconic as Jason. Scenes with him standing in the distance in the mine or at the end of an aisle in a supermarket are all kindsa creepy, especially once we’ve seen what he can do with that pickaxe.

This is a throwback to the early 80’s sort of slasher flick, which means we also get to wonder who the killer really is. Is it actually Harry Warden – did he survive being shot all those years ago? Is it Axel, trying to take out a rival and free himself from unwanted romantic entaglements? Is it Tom, living out trauma that he can’t get over? I was a bit surprised the first time I saw it, so I won’t spoil if for those of you who haven’t yet.

The Bottom Line
A rollercoaster – or minecart – ride of a slasher flick, with some heart, a lot of gore and nudity, and characters we grow to like and root for. My Bloody Valentine is a lot of fun and well worth a watch, even if slashers aren’t your thing.