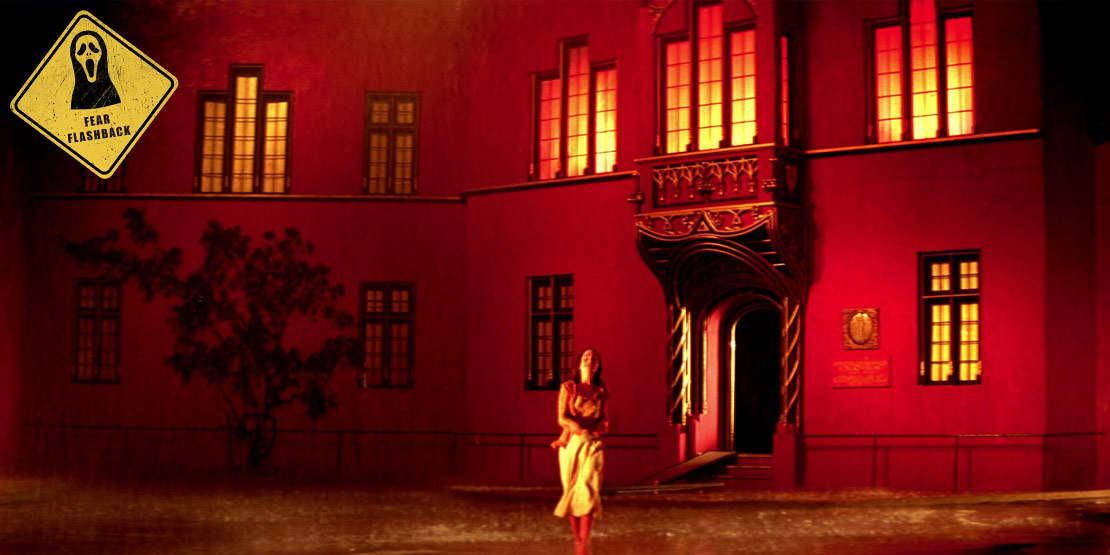 “Suzy, do you know anything about… witches?”

Fear Flashback continues the ScreenAge Wasteland anniversary celebrations by reviewing some of my favorite horror films. Today we dip back into the deep, bloody well that is Dario Argento’s filmography and return with a handful of witches.

I admit that I have something of a blind spot when it comes to Italian horror films in general, and Argento films specifically. I tend to love them with an uncomplicated fascination that blurs flaws, renders plot holes irrelevant and that leads me to having something like three Goblin soundtracks. One of my favorite Argento films, Phenomena, is a movie that reviewer and author Kim Newman calls “an almost total failure.” Ouch. 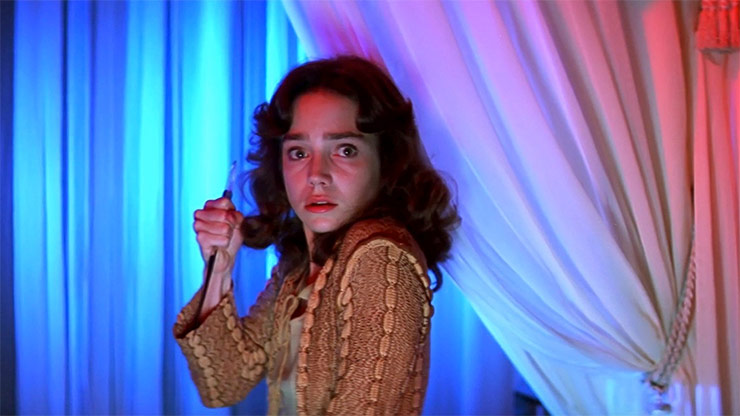 Suspiria generally doesn’t have the same problems with acceptance. Like The Bird With the Crystal Plumage and Deep Red, Suspiria enjoys an elevated position in the Argento canon. It remains Argento’s highest grossing release in the US and the current critical consensus regards it pretty highly, valuing the film more for it’s grandiose and gory style than for any detail of plot and performance. (The reception at the time of release was a bit more mixed.)

I almost certainly saw Suspiria for the first time on VHS sometime in the mid to late 90’s. Suspiria got a very late release on home video in the US for some reason, only appearing in the late 80’s, and it wasn’t something I was able to find in the local video rental places growing up. I also came to Argento films late in my horror watching and somehow hadn’t heard much about the film. It took a place like Matt & Dave’s Video Venture, where I found a ton of hard-to-find films, to finally give me access. (This was my local video store in the 90’s and, oddly, is referenced online as part of AP study questions on probability and statistics due to their ‘Thursday dice-roll’ days.)

I adored it immediately. It’s peak Argento, with the director working at his best creatively and with some of his finest collaborators (including co-screenwriter Daria Nicolodi and cinematographer Lucio Tovoli). I loved (and love) everything about it. The colors, the music, the pacing, the gory set pieces. I even remember the moment I completely bought in, which will sound stupidly mundane. Early in the first scene, when Suzy has arrived at the airport, she’s walking towards the automatic doors and there’s a quick cut to the door mechanism and a loud sound effect. It’s nothing. A throwaway. But I distinctly remember thinking “holy shit, he just made a DOOR OPENING into a moment fraught with menace.” From that point on I was all in. 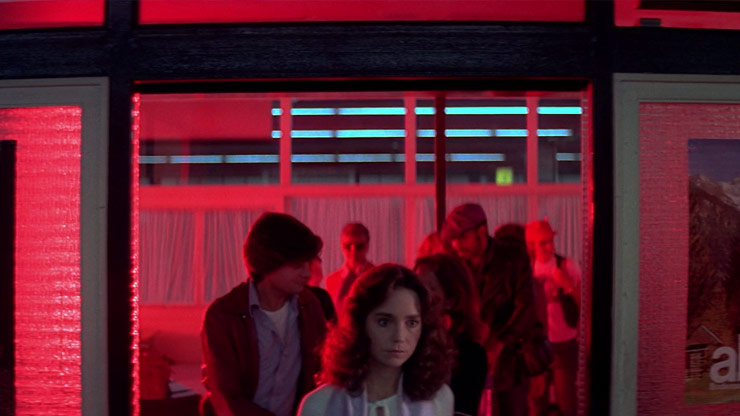 For a long time my go-to copy of Suspiria was the Anchor Bay DVD release, which my friend Beth bought me for my birthday many moons ago. It’s remastered, numbered (14,286/60,000 – not exactly a small run), has a ton of extras, and one of the three discs is the Goblin soundtrack (one of the three I mentioned above). I still have and treasure it, though my preferred viewing copy is now the more recent Blu-ray.

In the years since first watching it, I’ve probably seen Suspiria dozens of times. It remains just as much a joy for me now as it did on that first viewing. Like The Thing, Bride of Frankenstein or The Nightmare Before Christmas it’s become a film that is simply one I can watch anywhere, at any time. A film of the heart, as I’ve called them before, that simply clicks into the odd-shaped spaces of my soul. 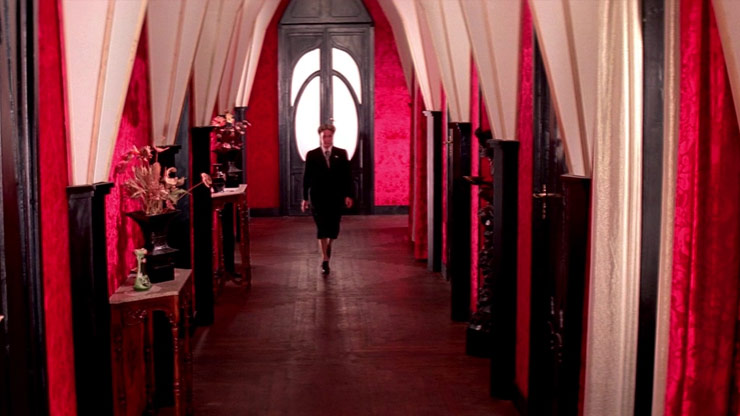 The Medium
Last year I picked up a copy of Suspiria on Blu-ray from Synapse Films. I got the steelbook edition, which is pretty cool, but the 2 disk standard version is spiffy as well. You’ll miss the soundtrack and a booklet, but the movie itself is the real prize here. Synapse spent a lot of time restoring the film and it’s a freaking revelation. The color and sound are amazing and I highly recommend picking this up.

Suspiria is currently available streaming on TubiTV as well, though not in HD as far as I can tell.

The Movie
I prefer my Argento films with a touch (or great, heaping gobs) of the supernatural. While Deep Red has moments of this – with the psychic and other moments of precognition – Suspiria is really where Argento began to allow that thread to weave a whole tapestry. The film is a dark and distorted fairytale, an unreal sequence of events and images that play out like a fever dream that you can barely remember the details of. Red lights in the airport, a child’s religious song twisted into haunting tones punctuated by the occasional shouted “witch,” long, primary-colored hallways with black-lacquered trim, art deco buildings and rooms filled with barbed wire. Even the violence feels unreal and heightened (though it remains visceral enough that my wife has opted out of watching the film multiple times). 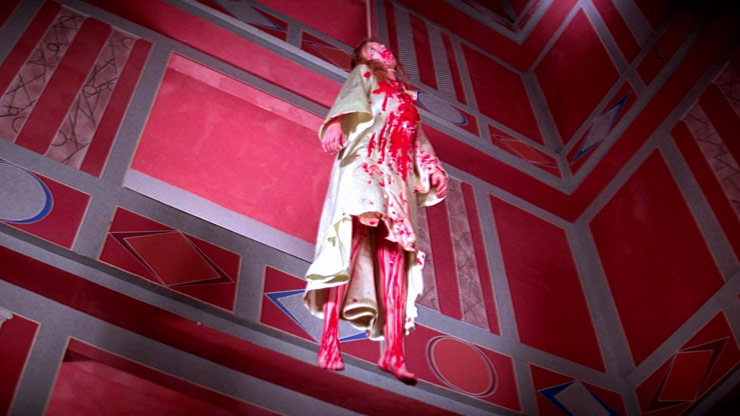 The plot is perhaps the least of the movie’s parts – a young ballet student, Suzy Bannon (Jessica Harper), arrives at a highly-regarded dance school in Germany where she begins to realize that the staff may in fact be a coven of witches. It’s not terrible as horror movie plots go – though the whole ‘coven of witches’ plot has been used before and since – but it just takes a back seat to the amazing set pieces and general atmosphere of dread. Daria Nicolodi has said in interviews that part of the plot is based on a story her grandmother told her about attending a boarding school where she believed the faculty practiced black magic. That’s kind of what the plot feels like – a half-remembered ghost story from childhood.

There is a slightly deeper thread, here, though it’s barely touched on during this film. One of the inspirations for Suspiria is Thomas De Quincey’s essay Suspiria de Profundis and his Three Mothers: Mater Suspiriorum, Mater Tenebrarum and Mater Lachrymarum (Sighs, Darkness and Tears respectively). Argento would go on to build a trilogy around this concept, with Inferno dealing with Mater Tenebrarum and the aptly named Mother of Tears rounding out the trilogy with Mater Lachrymarum – though the returns are of diminishing interest. Argento’s world of the Three Mothers is one of unseen evil, directed and maintained by these three witches. Forces of darkness, for in Argento’s imagining there is no good magic – only black magic and malefic intent. 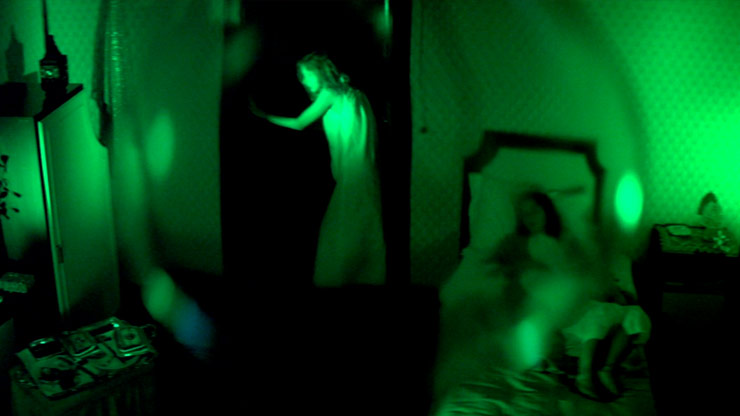 The fairytale feel is present from the beginning, with a voice-over announcing “One day, at nine in the morning, she left Kennedy airport, New York, and arrived in Germany at 10:40 p.m. local time…” It is, of course a dark and stormy night when Suzy arrives as well, just in case we’re not getting the tone yet. The rain and multi-colored lights distort reality, unsettling Suzy as well as us. Later, returning to the city in her cab after having been rebuffed at her first attempt to enter the school, there’s a similar moment of unreality as she sees a girl running, frantic, through the shifting outlines of the forest.

I’ve seen the movie enough times that I can actually pick out Argento’s reflection in the cab’s window during the initial drive to the school – one of two unintentional appearances by the director, though he also appears a mysterious cloaked figure and, as usual, the murderer’s hands.

That girl, Pat (Eva Axen), will end up being the first victim and it’s in that sequence that Argento forcefully reminds us that some fairytales are dark – that wolves eat grandmothers and witches curse kingdoms. Though she’s escaped from the school some dark figure has followed her and attacks, through an extended and bloody sequence. This segment of some of the most arresting imagery, both beautiful and disturbing, including vast, art-deco lobbies and shots of a knife entering a beating heart. It’s a calling card for the film itself, and though the blood is perhaps too bright to be believable for modern audiences the scene still retains its power to entrance and horrify. 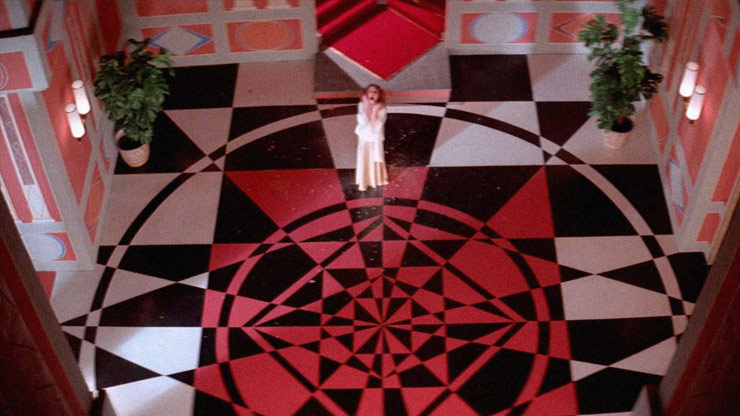 If I’m honest I barely pay attention to the plot points anymore. I let the visuals and music carry me through the film, as Suzy befriends Sara (Stefania Casini), experiences illness, rains of maggots, red-lit sleepovers and finally begins to piece together the dark secret of the school. My mind is mostly filled with prowling shots of red and blue hallways, vast pools like secret ponds, empty plazas at night where dogs go mad and the black corridor with gold light that hides beneath the school behind a painting of a flower.

I also remember set pieces like the death of poor Sara, who flees a killer into the attic only to fall into a room full of wire. It’s pretty clearly ‘just’ spools of regular wire, but I swear to you that the first time I saw it I thought for sure it was razorwire – my brain just filled it in. 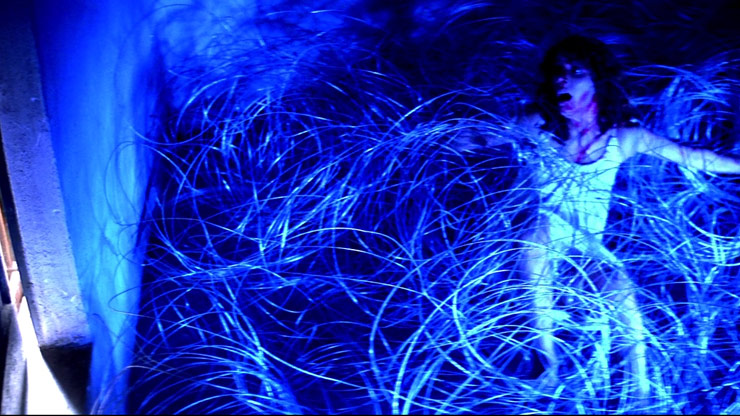 Everything builds up to a climax in which Suzy is forced to confront the head witch, Mater Suspiriorum herself, Helena Marcos, while hunted by the corpse of her own dead friend. It’s a great sequence as well, if a bit rushed – and features a “bird with crystal plumage” in a less-than-subtle nod to Argento’s breakout film.

The Bottom Line
The ending of Suspiria is a little abrupt and unsatisfying after all the stylish ghoulishness, but that’s not what sticks with you once the credits roll. Instead you’re left with a memory of nightmare-like halls, art-deco lobbies, running through the Black Forest in the rain and the whispering of witches in the red-hued night. 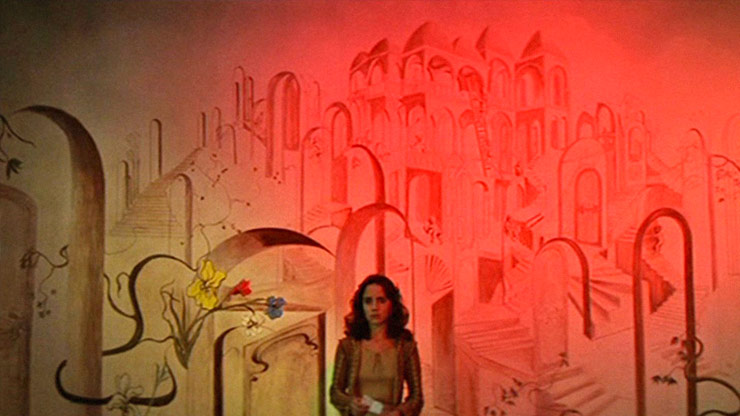 If you haven’t seen it, I highly recommend it – and envy you a bit for getting to see it for the first time. Suspiria is a fantastic and epic horror film, a treat for the eyes and ears, and it’s one of my favorite films.