If you were born between 85-95, there’s a strong chance that Jessica Rabbit (Kathleen Turner) was your first movie crush. Although she’s a cartoon, she’s everything a man (or in the case of Roger: a rabbit) could dream of. With that husky voice, red hair and big umm… lips, she’s sex incarnate. At the center of a conspiracy involving competing cartoon studios, a rabbit and a highway, Jessica puts herself in harm’s way multiple times to protect the rabbit she loves. She maybe drawn bad but she’s got a heart of gold.

Although the duo got their start in 1943 as antagonists to Mickey Mouse’s pet dog, Pluto, they would become much more famous four years later as arch-rivals of Donald Duck. Starting off as pests who lived to torment and annoy, the duo would eventually evolve into a comedic pair of crime solvers. Along with their friends Monterey Jack, Gadget (who I definitely didn’t have a crush on as a kid) and Zipper, the pint-sized detectives deal with crimes that are often “too small” for the police to handle. The gang often finds themselves going up against hardened gangsters, mad scientists and even space aliens; a far cry from a dog and a temperamental duck. While they’re definitely due for another reboot, the fact that people still want one after all these years proves that their reputation as one of Disney’s most beloved characters, is well earned. 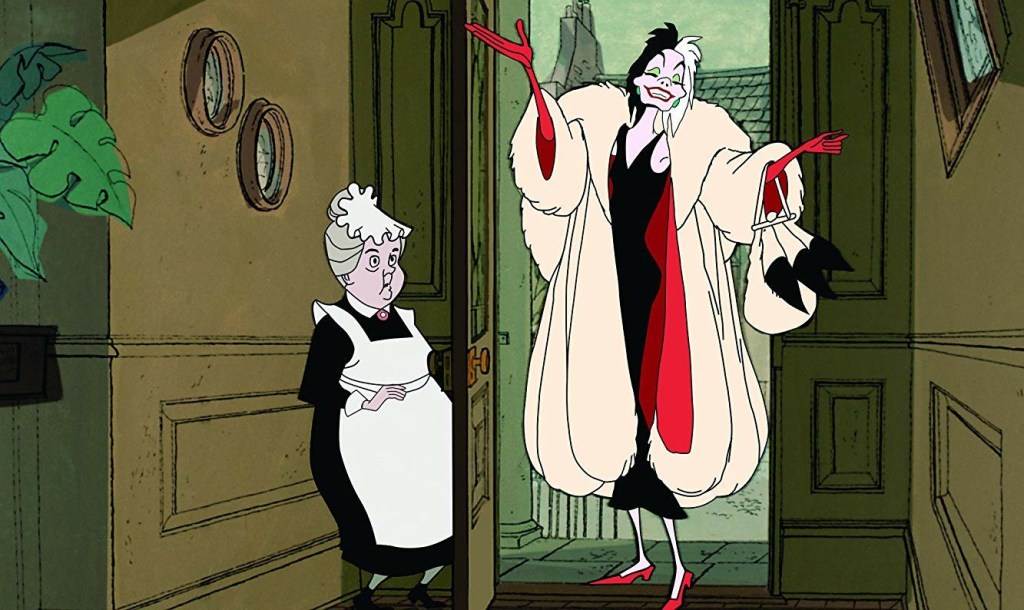 Only Walt Disney was crazy enough to see the money in adapting a novel about a crazy woman who kidnaps over ninety puppies with the sole purpose of skinning them to make a fur coat. The film stops at the puppy murder (thank god) but the novel involves her drowning multiple litters of kitties for no real reason other than the fact they were deemed “unwanted.” Let me repeat that for the cheap seats: Cruella De Vil owns a cat who’s sole purpose to the novels narrative, is to explain to the audience, who are children, that she wants to escape because De Vil keeps drowning her babies. And Disney read that and saw nothing but dollar bills falling from the heavens. Cruella De Vil is an actual devil but sweet baby Jesus could she have been worse. Drowning kittens and skinning puppies sounds like the alternate title of the Adventures of Milo and Otis. 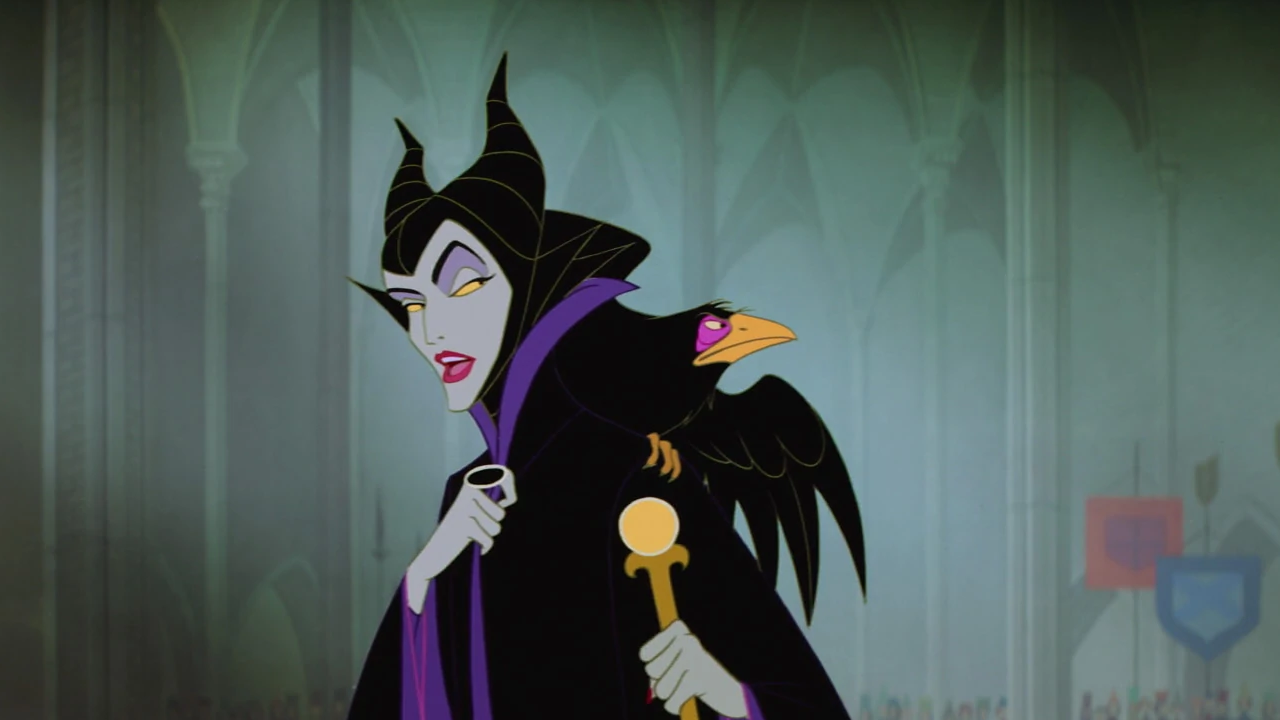 The Black Cauldron’s Horned King and Fantasia’s Chernabog may look evil but Maleficent (Eleanor Audley) is evil. She curses a young princess for no other reason than because she can. Using the pretense of taking offense at not being invited to the christening, she makes up some bullshit as to why she’s fucking everything up because she knows they’d understand a woman scorned and all that. She doesn’t care about the christening, she doesn’t care about Aurora, all she cares about is creating havoc. She’s a tornado of evil, spreading misfortune and unhappiness throughout the kingdom. And yet, she’s as beloved as any Disney Princess. Whenever Disney does something like a cartoon or videogame that involves all the villains, she’s always put front and center. She’s the villain all the other villains aspire to be. 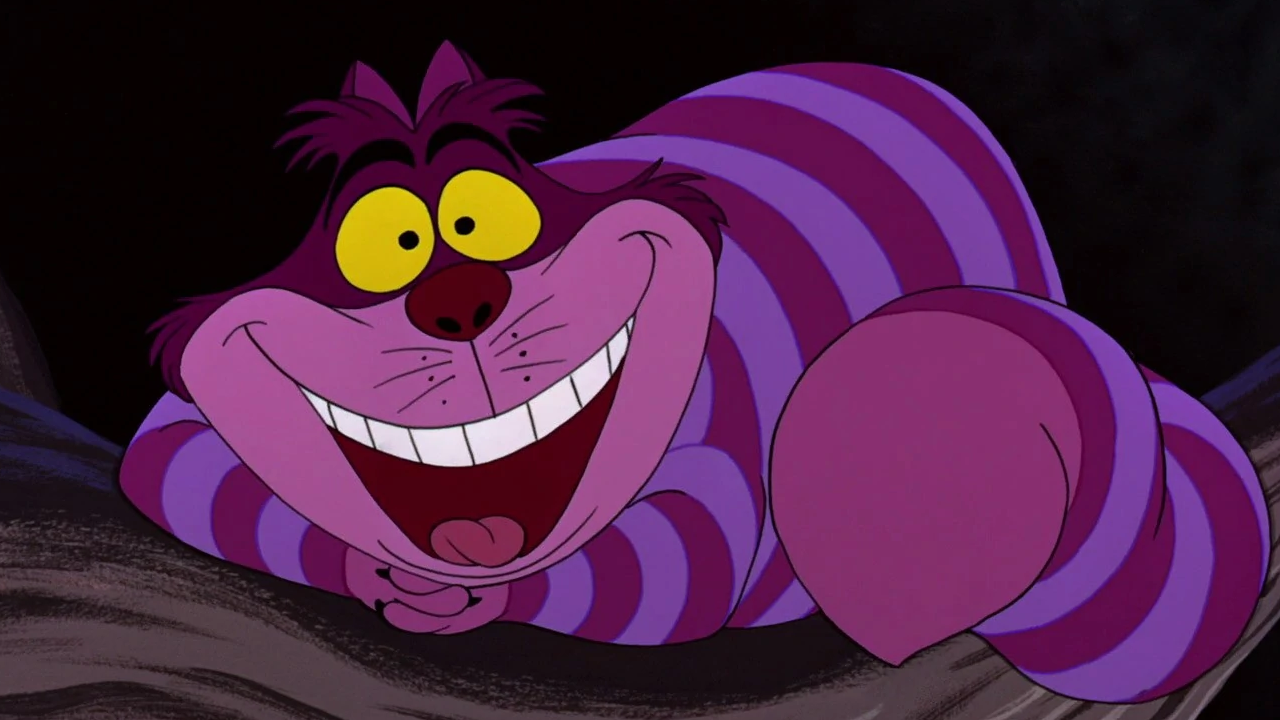 A mysterious, pink and purple striped cat with a permanent smile and a mischievous personality, the Cheshire Cat (Sterling Holloway) is the definition of a wild card. He clearly enjoys messing with Alice but are his tricks merely mischievous or more malevolent? It doesn’t seem like he wants to hurt her but it also doesn’t seem like he wants to help, either. He’s an agent of chaos, who’s aligned himself to no one and does what he pleases. He might also be the most powerful thing in Wonderland. His powers include: Invisibility, shapeshifting, transportation, metamorphosis and omnipresence. He can do anything, go anywhere, be anyone and knows all. And yet he chooses to use his infinite powers to mess with a young girl. Typical cat behavior.

It’s easy to forget that the legacy of Disney is built upon the back of a film that’s plot boils down to a boss bitch hating another chick so much that she wants to cut out her heart or poison her ass dead. Her hateful vendetta is built upon nothing but extreme jealousy. A magic mirror told her that she wasn’t the prettiest anymore and that was enough to drive her to murder. This crazy bitch set the standard all other Disney villains would follow. Before the wicked stepmother relegated Cinderella to a life of slavery and before Maleficent crashed a party and cursed a baby in order to “keep it real”, The Queen was there. 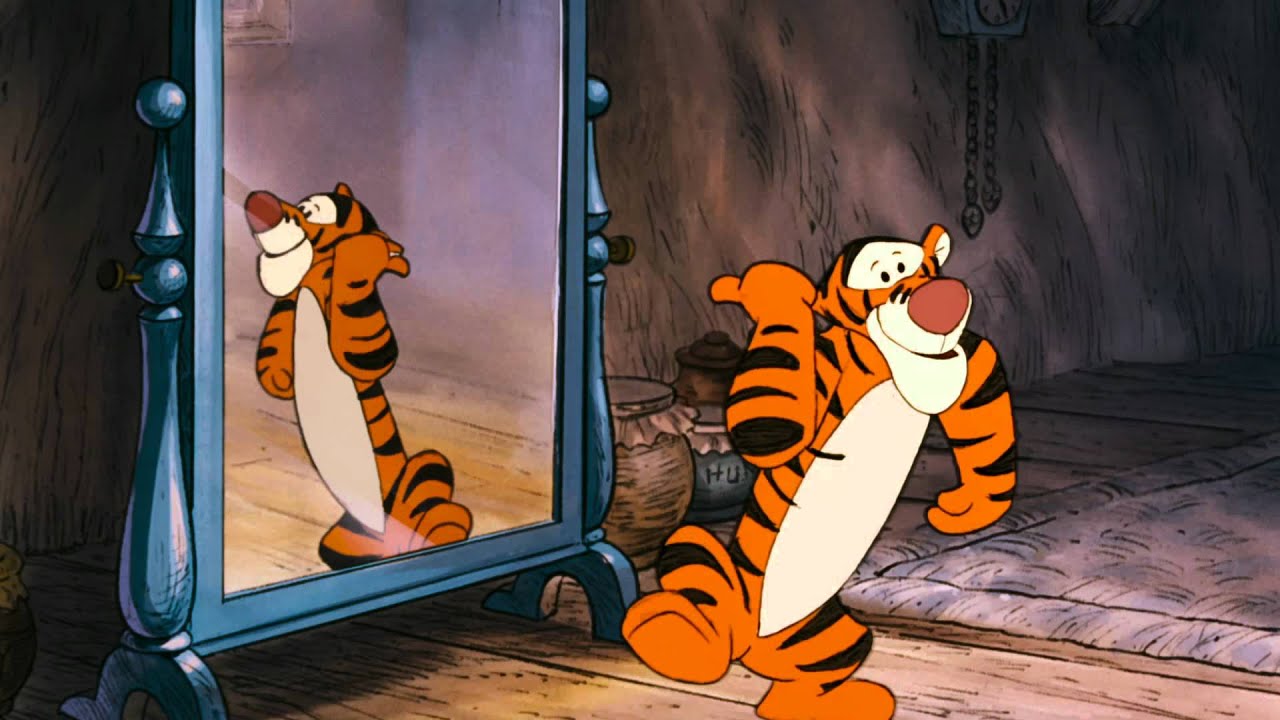 Overly energetic, reckless, and fairly thoughtless, Tigger the bouncy tiger is somewhat of a trouble-maker and causes a fair share of mishaps for both himself and his friends. The only one of his kind, Tigger is, as his trademark theme song states “… the only one”, which would make most depressed but has given him a huge ego. A hyperactive egomaniac who constantly brags and boasts and who is jumping all over the place sounds like a nightmare but at his core, Tigger is extremely loving and friendly; he means well and tries his best to be of support toward his friends. He’s always there when you need him and does his best to cheer everyone up. He even hangs out with Eeyore and nobody hangs out with that old buzzkill.

Appointed by the Blue Fairy to be Pinocchio’s official conscience, Jiminy Cricket (Cliff Edwards) is a wisecracking, anthropomorphic cricket who’s job it is to guide Pinocchio on his journey to become a real boy. Dressed to the nines in his top hat and tailcoat, and with an umbrella always on his person, Jiminy is a stylish little guardian angel who was added to the film to help the audience care about Pinocchio, to add a little bit of comedic relief and most importantly, an excuse to wedge a song into the film. A song that would go on to be the official Disney anthem for decades to come. A radical departure from his literary counterpart, the original version was so annoyingly preachy, that Pinocchio himself killed him with a hammer, only for him to come back as an even more annoying ghost. They wisely decided to make him less annoying, more integral to the plot and even gave him some humor and style. And in doing so, created the third biggest Disney mascot behind Mickey and Tinkerbell. 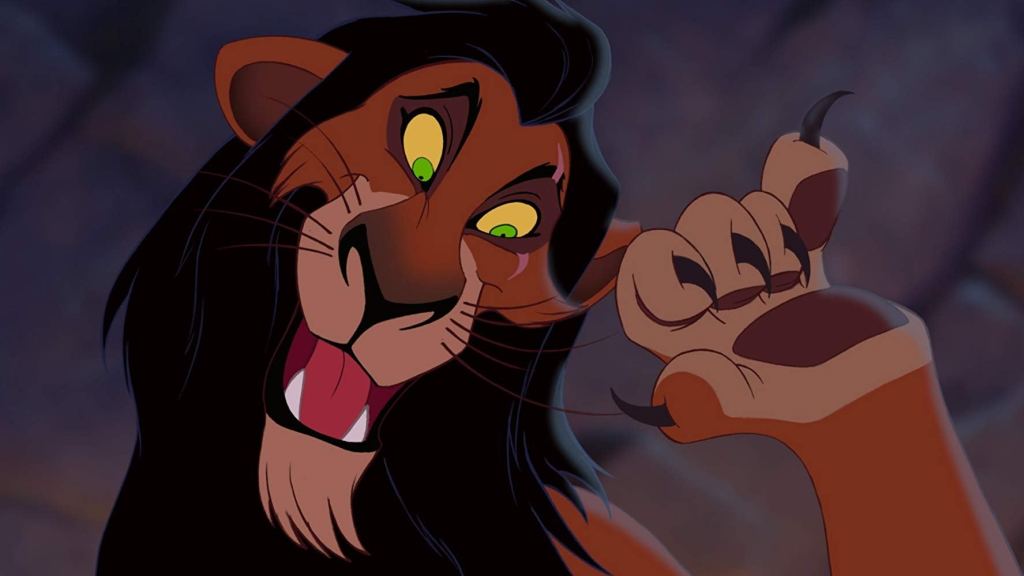 Even though the film could easily be dismissed as a lazy retelling of Hamlet by way of Kimba the White Lion, The Lion King was undeniably ambitious. It was Disney’s attempt to animate Shakespeare and although there’s plenty for cynics to attack, even the detractors have to admit that casting Irons in the role of the villainous Scar was a stroke of brilliance. Every line he utters is dripping with sarcastic menace.

Even though his motivation may be standard ‘usurp the king’, his plan and it’s execution are burned into the retinas of every kid who grew up in the 90’s. He’s also one of the only villains that actually gets what he wants. He doesn’t ultimately win in the end but the film shows us what happens when the villains plan finally succeeds for once. And it’s bleak. 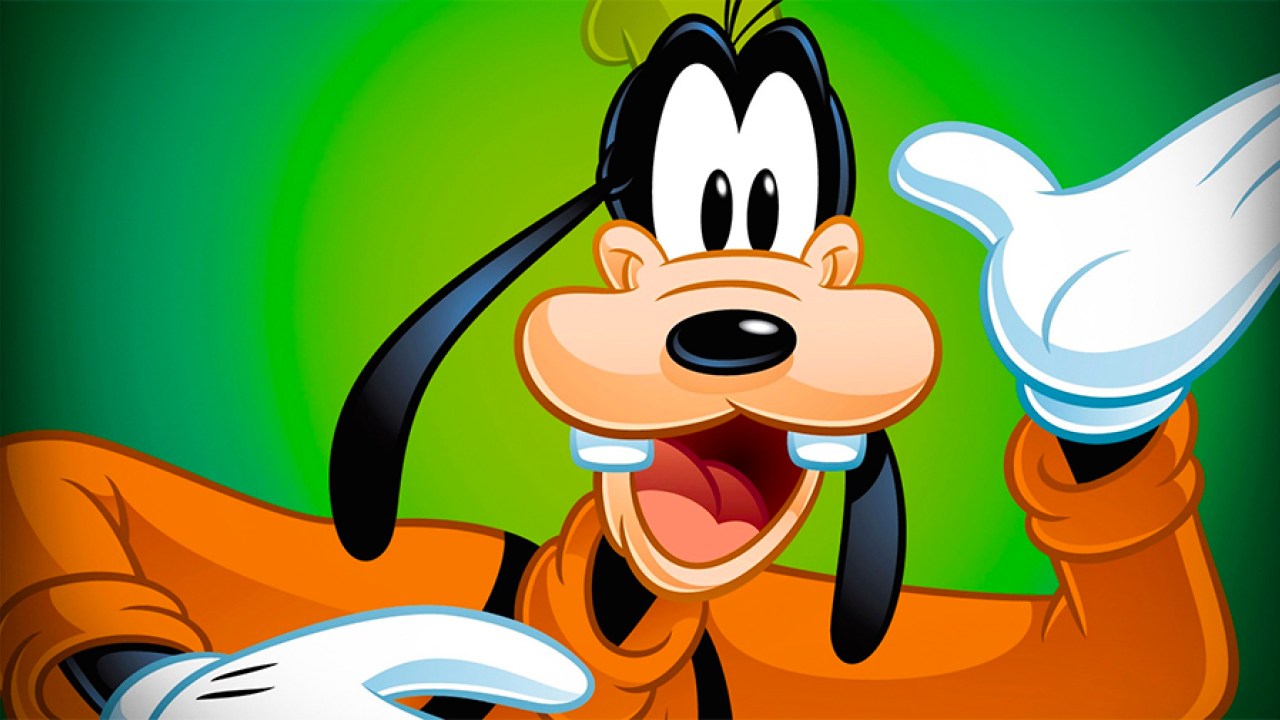 There’s been some debate over the years as to what exactly Goofy is. Since he inhabits a universe in which Pluto – a dog that acts like a dog – exists, there’s been some speculation as to whether or not he’s a deformed moose or a malnourished cow. While he’s clearly a dumbass dog, the internet can’t wrap their heads around the fact that he can talk while Pluto cannot. His original name was Dippy Dawg for Christ’s sake, but idiots still have to debate this.

In addition to being at the center of the dumbest non-debate ever, Goofy has been one busy dog­. Since his debut back in 1932, He’s been in tons of shorts and games and comics and even had his own series of spin off movies and shows. But his biggest contribution to pop culture might have to be his signature guffaw, his iconic holler or his catchphrase, “gawrsh!” With his unmistakable southern drawl and instantly recognizable sayings, he’s among the most imitated characters ever.

What have you thought of the selection so far? What are some of your favorite Disney characters from over the years? Do you think they will appear in the Top 10?