Charles Chaplin once said that he needed three ingredients to make a successful comedy (a man, a policeman, and a pretty girl), two for a love story (a man and pretty girl) but only one for a drama (a man without a pretty girl or alternatively, a girl without the pretty) and yet even he, with his rock solid formula, couldn’t crack the romantic comedy. Even though it’s the genre that’s the most dependent on cliches and tropes, it’s easily the hardest to get right. The alchemy behind a successful ‘chick flick’ is nearly impossible to get right. Since what people find funny and what people find romantic are entirely subjective, melding the two can be a tricky proposition. But it can and has been done. In honor of Valentine’s Day, Romona Comet and Sailor Monsoon have compiled a list of what they think best represent the genre. The films that make you laugh, that make you cry and more importantly, make you believe in the power of love.

This is The 50 Greatest Romantic Comedies of All Time. 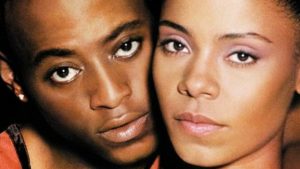 While not the first sports movie to add in a love story, Love & Basketball is arguably the best. The relationship between Rocky and Adrian is iconic but few would label Rocky as a romance, which leaves Tin Cup, The Cutting Edge and Bull Durham and while they’re all great, none of them are on the level of this film. Quincy (Omar Epps) and Monica (Sanaa Lathan), two childhood friends who grew into lovers and basketball players, struggle to make their relationship work as they follow separate career paths though high school and college basketball and potentially professional ball. An authentic coming of age tale about passion, ambition and the weight of one’s dreams against love, Gina Prince-Bythewood’s directorial debut is a slam dunk.

A girl from the valley meets a punk from the city and against all odds, they fall in love. But can their love survive peer pressure or will their affair be over as fast as it started? No actor on Earth does lovesick better than Nic Cage. He doesn’t do that many romantic comedies but when he does, he always knocks them out of the park. His eyes can convey melancholy and longing and pure happiness, sometimes all at once. He’s like a puppy dog you can’t help but love. And speaking of can’t help but love, what the fuck happened to Deborah Foreman? Based on just this and My Chauffeur, she should’ve been a star but for whatever reason, she just disappeared. Which is a shame. Oh, and the soundtrack is fucking great. 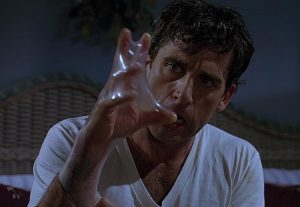 One joke comedies are hit or miss, with most either being about idiots trying to get from point A to point B with every plot contrivance imaginable getting in their way or an idiot trying to accomplish a goal with again, bullshit waylaying their every move. They’re almost always about idiots being idiots who get into outlandish scenarios because they’re idiots. The 40-Year-Old Virgin is also a one-joke film about idiots but this one is a bit different from the rest in that the idiots aren’t the main characters and that the joke is actually funny.

After realizing their co-worker has never been laid, a group of dummies try and help a 40-year-old virgin finally pop his cherry. If this film was made in the 80s, it would be a straight-up boner comedy with nudity every second and sex every five minutes because honestly, it has a plot ripped straight out of the Penthouse forums but Apatow isn’t interested in making softcore smut or lowbrow sex farces. A surprisingly sweet and rip-roaringly hilarious portrait of the difficulties of dating while middle-aged, The 40-Year-Old Virgin is a tender and honest romantic dramedy that deals with loneliness and the perceived importance of sex in a relationship. 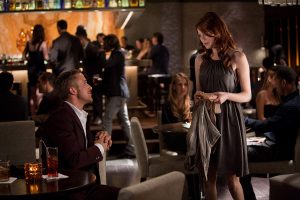 The Chrises might be dominating the superhero genre but when it comes to chick flicks, the Ryans hold dominion. Reynolds’ natural charisma perfectly lends itself to romantic comedies, while Gosling’s seriousness is a perfect fit for standard love stories. One makes you laugh, the other makes you weep but for one glorious movie, Gosling decided to switch it up and the result is glorious. Acting as a pseudo-sequel to The 40-Year-Old Virgin, Crazy, Stupid, Love once again sees a middle-aged Steve Carell trying to navigate the insane world of middle-aged romance but this time, instead of a trio of knuckleheads giving him terrible advice, he’s guided by the effortlessly cool Gosling. A love story with multiple intertwining threads, all of which are satisfying, the film has an infectious charm that’ll win you over long before the credits start to roll. 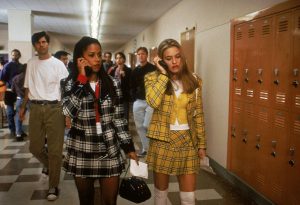 While many obvious modernizations and changes having been made to the original story, Clueless sticks surprisingly close to Jane Austen’s Emma. All Amy Heckerling did was change the location from some high-class estates set somewhere in the countryside (I’m assuming, I haven’t read the book) to a high school, rename a couple of characters and create some ridiculous slang. Everything else is taken from the book. Oh and the fashion. I doubt immensely that British high society were this obsessed with plaid.

So I guess just the plot, characters and theme. Not everything but close enough. With an iconic story serving as its blueprint and a pop-culture conscious director at the helm, Clueless is a film that is both timeless and 100% of its time. In a good way. The romance at the center of the film is a classic love story, while everything else is gloriously 90s. It’s a reimagining that knows what to take and what to add. And hot damn is Alicia Silverstone good in this. 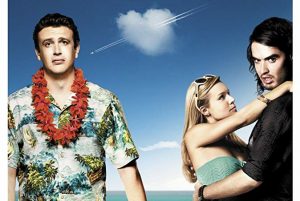 Before it came out, critic Richard Roper got flak for calling Forgetting Sarah Marshall “one of the funniest movies (he’d) ever seen” and twelve years later, I still don’t understand why. Segel immediately proved he’s every bit Apatow’s equal with this smartly written, nakedly (in more ways than one) personal tale about heartbreak, moving on and finding the emotional strength to do it all over again. It’s Woody Allen but with more sex jokes. Or Albert Brooks but with more heart. And sex jokes. Roper was right: this is among the funniest films ever made but what he failed to mention is that it’s also one of the best rom-coms too. 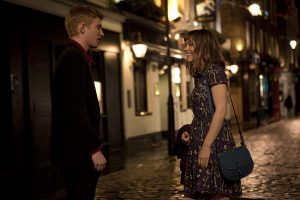 There are plenty of romantic comedies that feature a gimmick, and About Time is not the first of them to deal with time travel. But it is one of the few that do it well. Written and directed by Richard Curtis, it’s no surprise that About Time features poignant performances and sharp, insightful dialogue. Rachel McAdams and Domhnall Gleeson are so charming to watch together. Their love story shapes the film, but it’s Gleeson’s scenes with Bill Nighy, who plays his father, that is the true heart and soul of About Time.

The movie is so much more than a romance, and it’s so much more than a comedy. It’s an insightful, sentimental look at time, and how often we take it for granted. Life is so fleeting that we need to appreciate what we have, while we have it. I’m sure plenty of cynics will roll their eyes, but it seems impossible not to watch this film and walk away from it feeling unmoved. To this day, I’m not sure there is anyone else who writes about the multi-facets of love as skillfully as Richard Curtis. 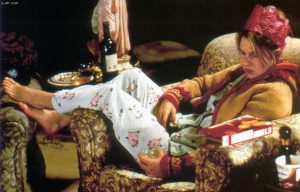 Based on the immensely popular book, there was a bit of an uproar when American-born Renee Zellweger was cast in the role of the British heroine. With the wrong actress, Bridget could have easily come across as unlikeable and a bit of a mess. Instead, Bridget is still a bit of a mess, but thanks to Zellweger’s charming portrayal, she’s quite sympathetic and more importantly, relatable. Her weaknesses are quite apparent throughout the movie, but they’re never unforgivable because Bridget learns from her mistakes and tries to fix them as she can. She has two extremely different, but entertaining relationships with Daniel (Hugh Grant) and Mark Darcy (Colin Firth), an ex-friend of Daniel’s who is a rather serious barrister that Bridget’s mother tries to set her up with at a holiday party (with disastrous results).

Honestly, I never get tired of watching this movie. Zellweger has taken on plenty of dramatic roles (and won an Oscar for Cold Mountain), but she has such talent as a comedic actress that I don’t think we get to see much of anymore. She’s a joy to watch as Bridget, even in the less entertaining sequels. This movie could have been zany and over the top, but director Sharon Maguire keeps it fresh and on pace, never trapping it within the generic confines of a typical rom-com. It probably helped that Helen Fielding (author of Bridget Jones’s Diary) and Richard Curtis (Four Weddings and a Funeral, Notting Hill) helped adapt the screenplay. There are changes from the novel, but those changes definitely work and dare I say, improve the film?

Bridget Jones’s Diary is a rom-com classic. One of the select few that do the genre justice. 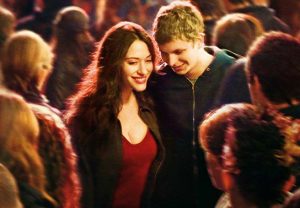 Lorene Scafaria has only written a handful of films but every one of them is an underrated gem. Seeking a Friend for the End of the World and The Meddler are still unknown to the vast majority of population and Hustlers, while critically acclaimed, only became a minor hit through word of mouth and the presence of J.lo but honestly, would anyone have seen it if it wasn’t about strippers? It’s an outlier among her filmography and a far cry from her adorably sweet debut. 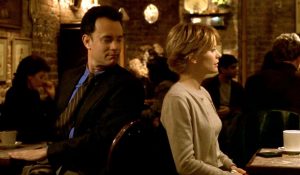 You’ve Got Mail is a classic rom-com, but it also feels like something of a love letter to New York. We take the same journey with Joe (Tom Hanks) and Kathleen (Meg Ryan), from fall through winter and into spring, and every shot of the changing seasons is beautifully captured, feeling as romantic as the online relationship itself. I wanted to visit The Shop Around the Corner, along with Fox Books and the cozy little cafe where Joe finally realizes that Kathleen is in fact, Shopgirl (her online screen name). It felt like they were living in a different world, and obviously, this is merely a fantasy of what it would be like to actually live in New York (and only if you have the money for an amazing apartment in a nice neighborhood), but Ephron does a marvelous job at capturing the city’s magical energy.

I would say my favorite part, beyond the snarky banter between Joe and Kathleen, occur after Joe realizes he wants to be with Kathleen. He’s aware that Kathleen is Shopgirl, but she has no clue he’s actually NY152, and he plays her confidante as they become friends and she tells him about her online friendship/romance, which Joe uses to his advantage (yes, I feel like this could have been manipulative but there is no malice behind his intentions). There is a lightness to the ending of the film, as the two become actual friends and Kathleen begins to struggle with her feelings for Joe while still wanting to meet NY152.

Ryan and Hanks’s chemistry has stayed consistently charming since Joe Versus the Volcano, and even if they never film another romantic comedy together, I’ll be more than satisfied with You’ve Got Mail finishing off the ‘Hanks and Ryan Trilogy’ of romance.

What do you think of the selection so far? What are some of your favorite romantic comedies from over the years? Maybe they will show up further on the list!