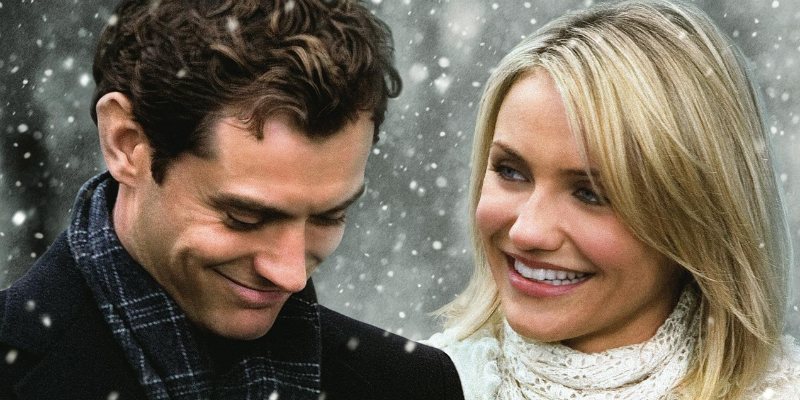 In London, Iris (Kate Winslet) is told a colleague she’s been in love with for three years is engaged to another. In Los Angeles, Amanda (Cameron Diaz) splits with her unfaithful boyfriend. On an impulse, the women decide to swap homes on a house exchanged website over the Christmas holiday to try and mend their hearts and forget the men who broke them. In L.A., Iris meets Miles (Jack Black), a film composer, and friend of Amanda’s ex, while Amanda begins a complicated romance with Iris’s brother Graham (Jude Law) while in Surrey.

Like most romantic comedies, The Holiday has a plot that is fantastical and requires an extension of belief, but if you’re willing to do that – and why wouldn’t you be? – you’ll find the movie is charming and romantic. Out of the 5 main characters, yes I consider Arthur a main character as well, each has experienced love differently.

Arthur (Eli Wallach) married the love of his life and remained married for 40+ years until his wife’s passing. Graham is a widower with two little girls, Miles is in a relationship with an aspiring actress who is clearly out of his league (and he knows it), Iris has been suffering from unrequited love from a colleague who continues to take advantage of her affection and Amanda is a woman who has difficulty opening herself up to love because of her parents divorce. I have to imagine at least one of these scenarios could be considered relatable to anyone watching, and I felt for all of them on a different level.

While it feels like the film focuses a tad bit more on the intense love story between Graham and Amanda, I think I actually preferred Iris’s story of self-discovery a bit more. Her friendship with Arthur and budding romance with Miles felt more believable to me (and yes, I will always love the ‘schlubby guy’ getting the beautiful girl in any rom-com). That’s not to say I didn’t enjoy Cameron Diaz and Jude Law’s story. Their chemistry was instant and only got better once Graham’s children were thrown into the mix. I’m just thrilled he wasn’t written as a cad who needed to be tamed by the blonde American beauty.

I still feel like the score Miles wrote for Iris was one of the best parts of the movie (“I only used the good notes”), along with his singing of various film scores in the video store, which I found stupidly charming. I’m also a sucker anytime a man in a rom-com cries when he sees the love of his life (I’m looking at you Jude Law). One of my favorite romantic movies to watch during this time of year, although I couldn’t tell if it was just because it was so late when I watched it or what, but it does feel a bit ‘long’ at times compared to other rom-coms.

“You’re supposed to be the leading lady of your own life, for god’s sake!” – Words to live by. Thank you Nancy Meyers!

Also, Diaz reminds me of a young Ellen Barkin in this movie. Just sayin’.