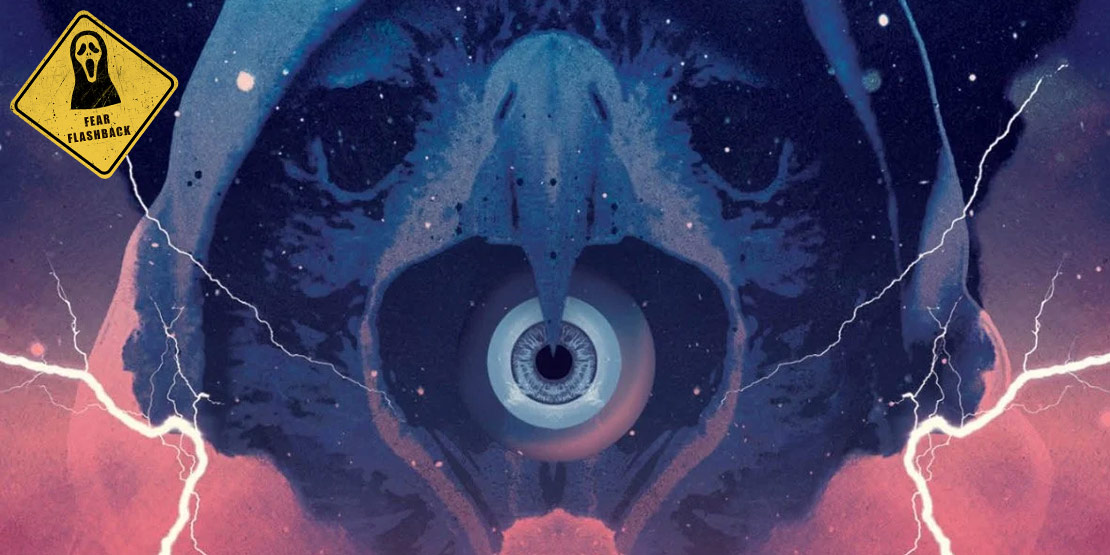 I’m in a random mood this month. After a series of themed reviews I’m a little at-sea with my choices, back to choosing something based completely on mood and availability at the time I’ve set aside to watch a film. In general I roll with it, but last night I planned to watch Let’s Scare Jessica to Death – and instead found myself cueing up a random piece of Italian 70’s madness. A film with an all-star cast, including John Huston, Lance Henriksen, Glenn Ford, Mel Ferrer, Sam Peckinpah, Shelley Winters and Franco Nero. Given those performers and the date you’d be forgiven for thinking this was some big-budget disaster movie. But no. Well, I mean, it IS a disaster… 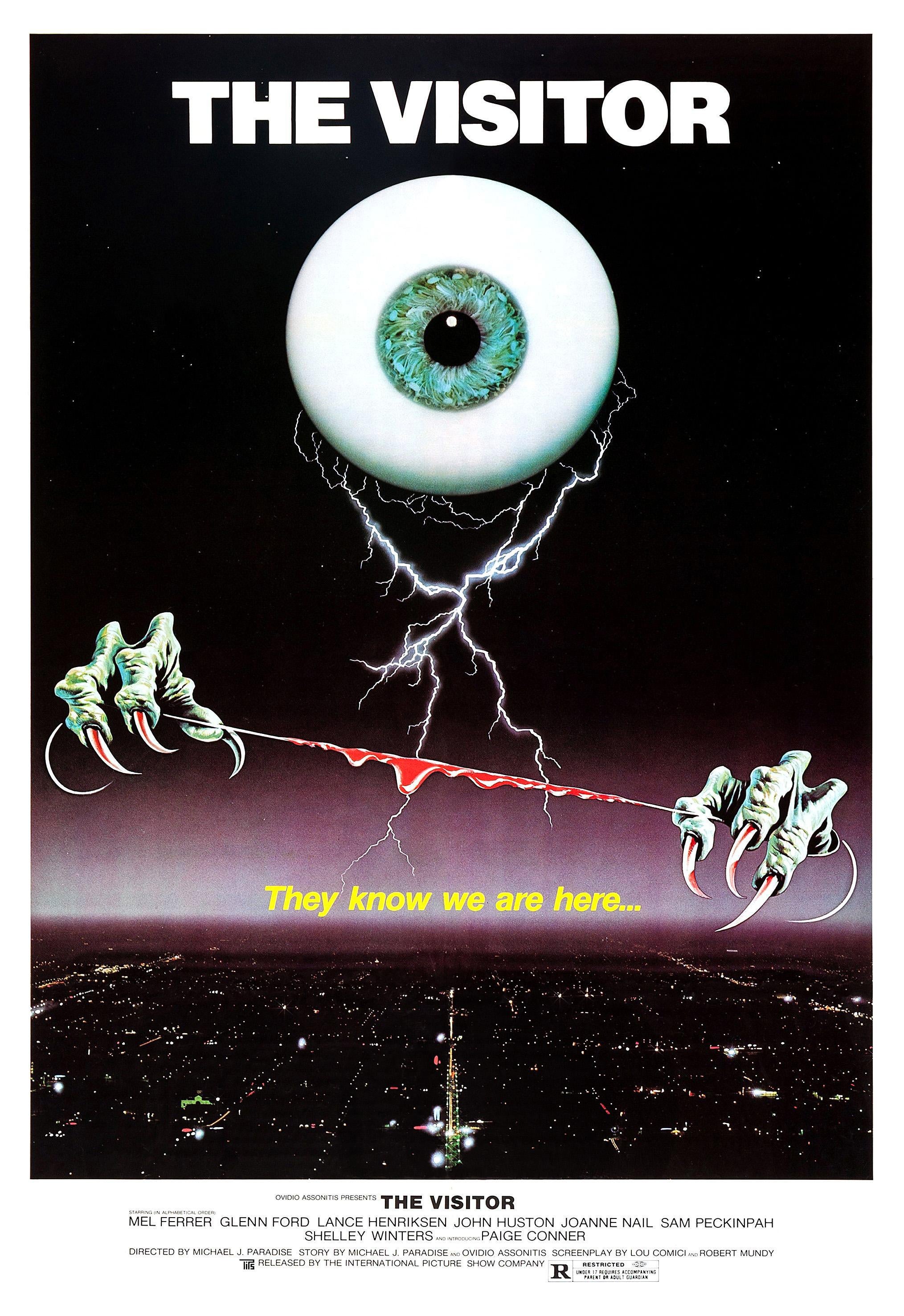 It’s not that The Visitor is completely worthless, far from it. It’s got some interesting visuals and ideas swimming around in all the craziness – it’s just a loud, proud, mess of a film.  It’s not Nobuhiko Obayashi House crazy, but still pretty messed up. It’s as if Lucio Fulci got tapped to direct an Omen ripoff as produced by Irwin Allen. It’s a ‘devil’ movie, but with aliens instead of God and Satan. It’s got Shirley Winters singing Shortnin’ Bread while dressed as Mary Poppins. It’s got Django as Jesus – at least I think he’s Jesus. He could be my friend Greg Hyland, circa 1999, though, as they look(ed) pretty similar. 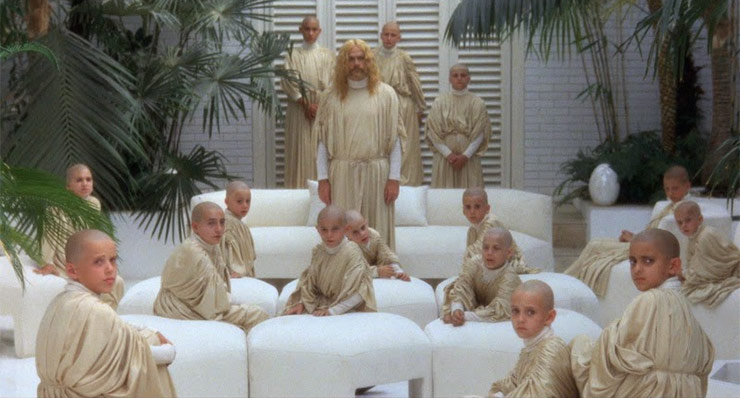 This is the third time I’ve watched this film, only the second since the turn of the century. Somehow, beyond all reason, I’ve started to enjoy it. There’s some kind of weird alchemy that’s taken place since I first picked up a VHS copy with a giant eyeball crapping lightning bolts on the cover. It’s as if repeated exposure is either numbing me, or changing my brain into one that can enjoy roughly twenty minutes of John Huston walking around Atlanta…

The Medium
I bought the Drafthouse Films Blu-ray, used, a few years back. It’s perfectly serviceable, but there’s still plenty of noise, scratches and film damage. The cover is reversible, which I guess is nice. There are a handful of extras, including a fun interview with Lance Henriksen. (There’s nothing quite as funny as watching an actor cover his face with his hands when describing a film he’s in.)

The Visitor is available streaming for free on Vudu and Tubi (with ads), as well as for sale and rent on multiple services.

The Movie
After a bizarre opening sequence in which John Huston stands around in a desert while a little girl gets hit in the face with potato shavings, we get a rundown of how things stand as delivered by Jesus (Franco Nero) to a group of bald kids. No I’m not kidding. I think that opening sequence (which is pretty interesting, visually) is supposed to represent a cosmic struggle between the forces of good and evil. I think. 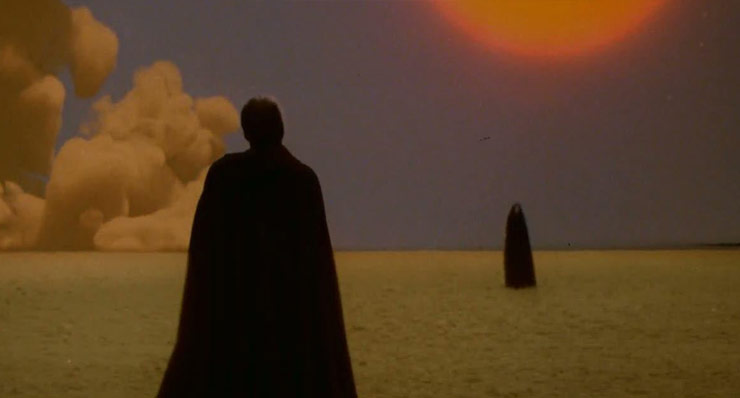 The basic point that Django… er, Jesus, is trying to get across is that there was a super-evil bad guy (Sateen – get it?) that was defeated by a super-awesome good guy and an army of birds, but not before passing his evil on by doing the nasty with women on earth. So his evil is like a genetic trait that gets passed down and occasionally expresses itself in evil offspring with magic powers, and then someone calls cosmic 911 and super-awesome good guy (the eponymous Visitor – played by John Huston) goes and does something about it. The Visitor shows up and says they’ve got a new sighting – it’s an eight-year-old girl in Atlanta, Georgia.

This sequence is reminiscent of a similar scene in The Matrix, when Neo goes to the Oracle and her apartment is full of psychic kids – though in this they’re all the bald kid with the spoon and the apartment is a massive Art Deco sunroom and the Oracle is – again – Django. Maybe it’s all the pseudo-religious philosophy that reminds me of The Matrix. Maybe I’m just losing it. 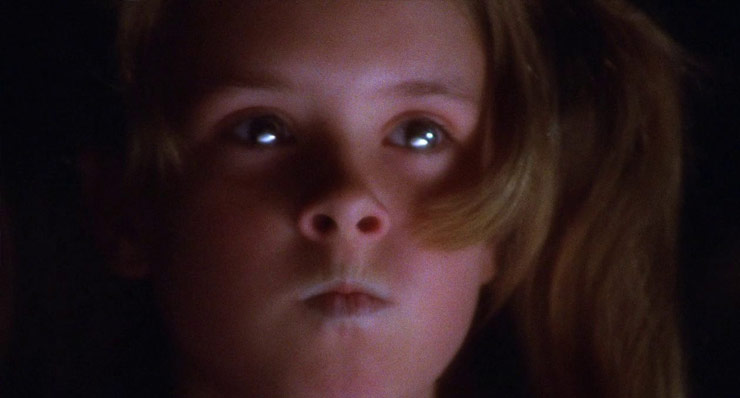 The eight-year-old girl, Katy (Paige Conner), is manifesting powers – including telekinesis and the ability to swear like a sailor. In an early scene she blows up a basketball player with her mind, I think. I’m not sure. Her mom, Barbara (Joanne Nail) is a nice but bland person who is being wooed by the basketball team owner, Raymond (Lance Henricksen) who is beholden to a weird cabal that seems to want her to have more kids. More kids like Katy.

Much of the movie revolves around Katy being a dick. She ‘accidentally’ paralyzes her mother, Barbara, when one of her birthday presents turns out to be a handgun. She torments some boys at a skating rink, eventually spinning at high speed before throwing a couple of them out of the rink. The detective that is investigating the shooting (Glenn Ford) gets murdered by the girl’s pet hawk (or falcon – I think the actual bird changes over the course of the film). She swears at everyone, including the housekeeper (Shelley Winters) who, to be fair, does slap her an awful lot. I THINK the housekeeper is supposed to be there to guard the mother – and even says so – but she’s spectacularly useless at that. And she’s mean enough to Katy that you’re expecting some kind of retaliation given that Katy is essentially a psychic devil child, but she’s left alone. 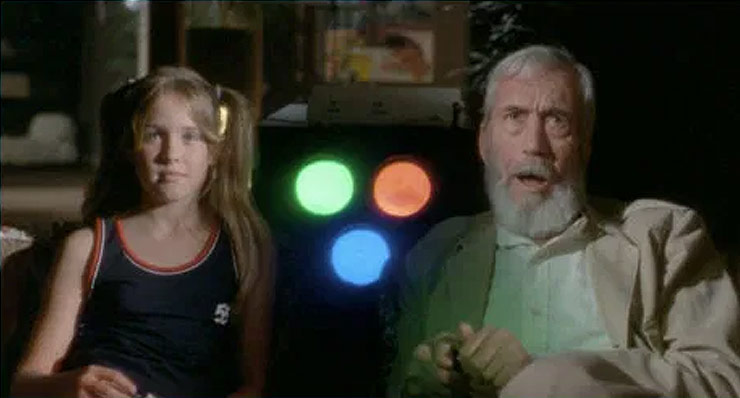 When the Visitor shows up to confront Katy (and get his ass handed to him at Pong) you wonder if there’s going to be some epic confrontation of psychic powers between them – but there isn’t. He poses as a babysitter replacement – which even in the 1970’s would have been unbelievable – and ends up asleep on the couch. (Of course Huston was in his late 70’s – he was probably just tired of trying to figure out the plot.) Even later, when Katy does try to kill him, it’s mostly Scooby-doo running between doorways and one loose screw on a fire escape.

There are late night abductions, attempted murders, weird looking houses and one epic bird attack, but there’s not a lot of sense to be had. Sometimes John Huston goes to a rooftop and holds his hands up while lights appear. Sometimes Katy does gymnastics. The hawk attacks people. Sam Peckinpah shows up for four minutes and Mel Ferrer menaces in a distinguished way. It sometimes makes sense and sometimes doesn’t. The end made me think the aliens from Close Encounters of the Third Kind were going to show up – or that Neo was going to appear and bend spoons. 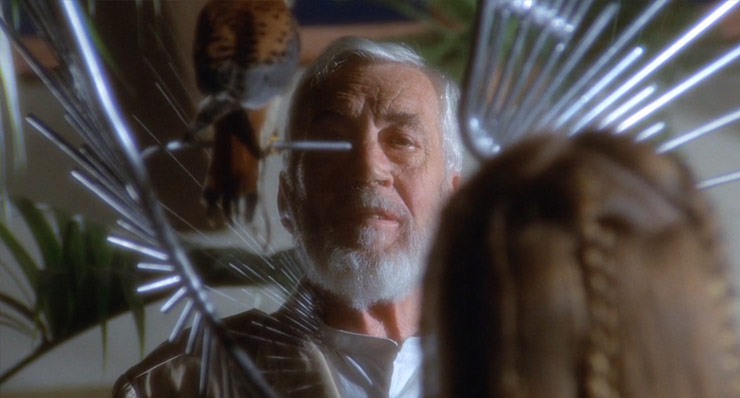 There are way too many scenes that go nowhere as well – the aforementioned gymnastics sequences, for instance, or any scene in which John Huston walks down a staircase. I’d say that these kill any suspense or momentum the film builds, but there really isn’t any.

So much of The Visitor feels like a low-budget Italian exploitation flick, despite being set in Atlanta, with all that entails – the nonsense plot, the occasionally amazing visual set pieces, the over-the-top score. And then there’s Glenn Ford as a hard-bitten detective, running over a guy on a motorcycle, or Shelly Winters slapping a kid, and it’s all ‘you got your peanut butter in my wasabi peas’ – two great tastes that are WTF together. 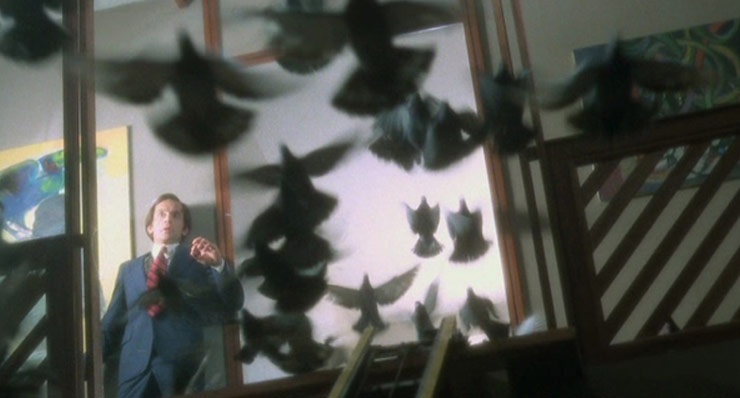 The Bottom Line
The Visitor is a bizarre and nonsensical film that’s occasionally visually arresting, occasionally cold molasses slow, and always just on the edge of going completely off the rails. It’s packed with top-flight 70’s actors in weird roles. It’s an experience, but your enjoyment may vary significantly from scene to scene. and you may end up questioning whether it’s an experience that you needed to have.