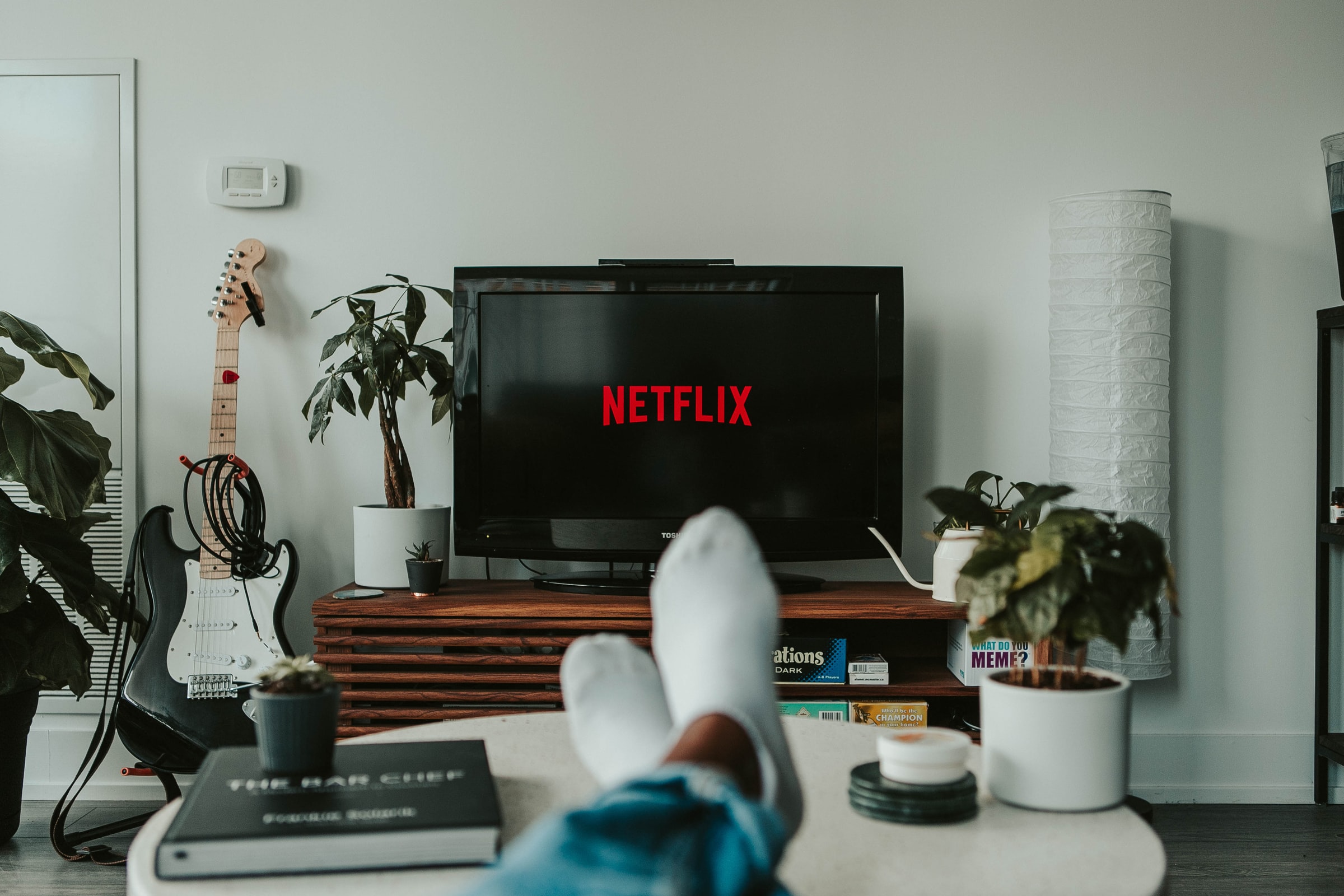 Three months into this social-distancing-self-quarantine-lifestyle and we’re still faced with the daunting question: What should I watch next? After all, there’s always something else to watch, and in the sea of streaming libraries finding the right next one can be tedious. Allow me to help.

Each month, I pick a short-list of worthwhile titles waiting to be unearthed from the algorithms of Netflix, Hulu, Amazon and the like. Because life’s too short to watch the wrong stuff.

Here are a few can’t miss TV shows that will upgrade your “To-Watch” list for the next month. 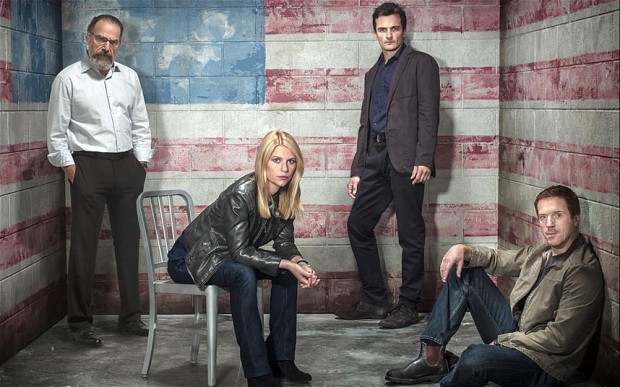 In recent memory, I struggle to think of a show that experienced a more drastic drop-off than Homeland. Along the same lines as Dexter, it seems Showtime has a bit of a problem with ending things well. So take this recommendation with a bit of caution, but hear this, the earlier runs of the show are totally worth a watch. Because, let’s be honest, any superlatives this title has earned certainly were tied its first three seasons.

Told thru the lens of a bi-polar CIA field officer, Homeland follows Carrie Mathison (a brilliant Clare Danes) as she grapples with terrorism, homeland security, Washington politics, and the love of a polarizing war hero (or turned terrorist?), Nicholas Brody. The initial trilogy of seasons charts this arc, the ups and downs of turbulent relationships and harrowing domestic threats. In the same vein as The Wire and early House of Cards, Danes, Mandy Patinkin, and Damien Lewis anchor a visceral journey that deserves placement among the best prestige, political thrillers. It truly is a home run of an achievement which leaves me scratching my head as to how they could struggle writing the rest of the series.  The drop-off is noticeable and it’s a shame. But damn if the early installments don’t deliver grade-A characterization and guttural stakes.  No matter how many times I see it, the closing of season one leaves me breathless, while the end of Brody’s run in season three just flat-out breaks me.

Homeland seasons one, two and three are a wild ride that’ll keep you guessing and trading allegiances in grand fashion. 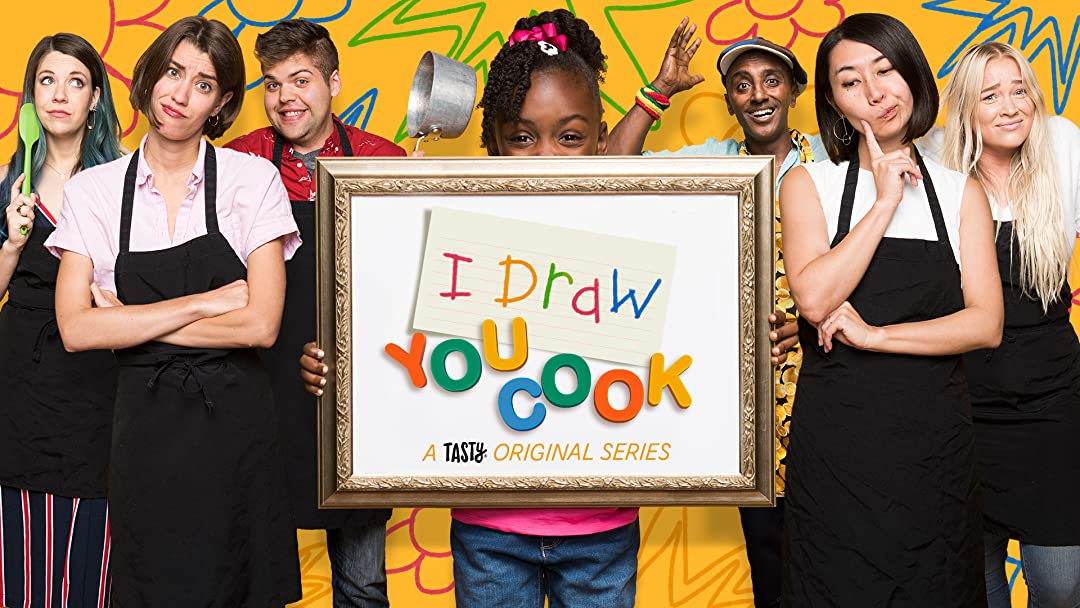 What would it look like for a chef to whip-up a meal based on a kid’s imagination?  The answer is surprisingly awesome.

I Draw, You Cook is a fun cooking / baking show from the online thumb-stopping sensations over at Tasty. The logline is simple: Put markers and a notepad in the hands of a young kid and have them draw a fantastical, tasty display and challenge a couple cooks to make it an edible reality. What we get are fun episodes of colorful, silly cooking competitions packaged in perfectly binge-able 15-minute modules. And of course, there’s a winner at the end of each one.

Need a spicy dragon chicken scene? Or maybe an ice princess display of colored ice-cream and cheese sandwiches? What about an underwater jellyfish jello mold? This show’s got it and then some. In this space inventive culinary ideas are the game and conventional tastebud pairings go out the window. This one is a staple in my house; my four year old can’t get enough of it, and, to be honest, neither can I. Add I Draw, You Cook to family TV night and have some fun. 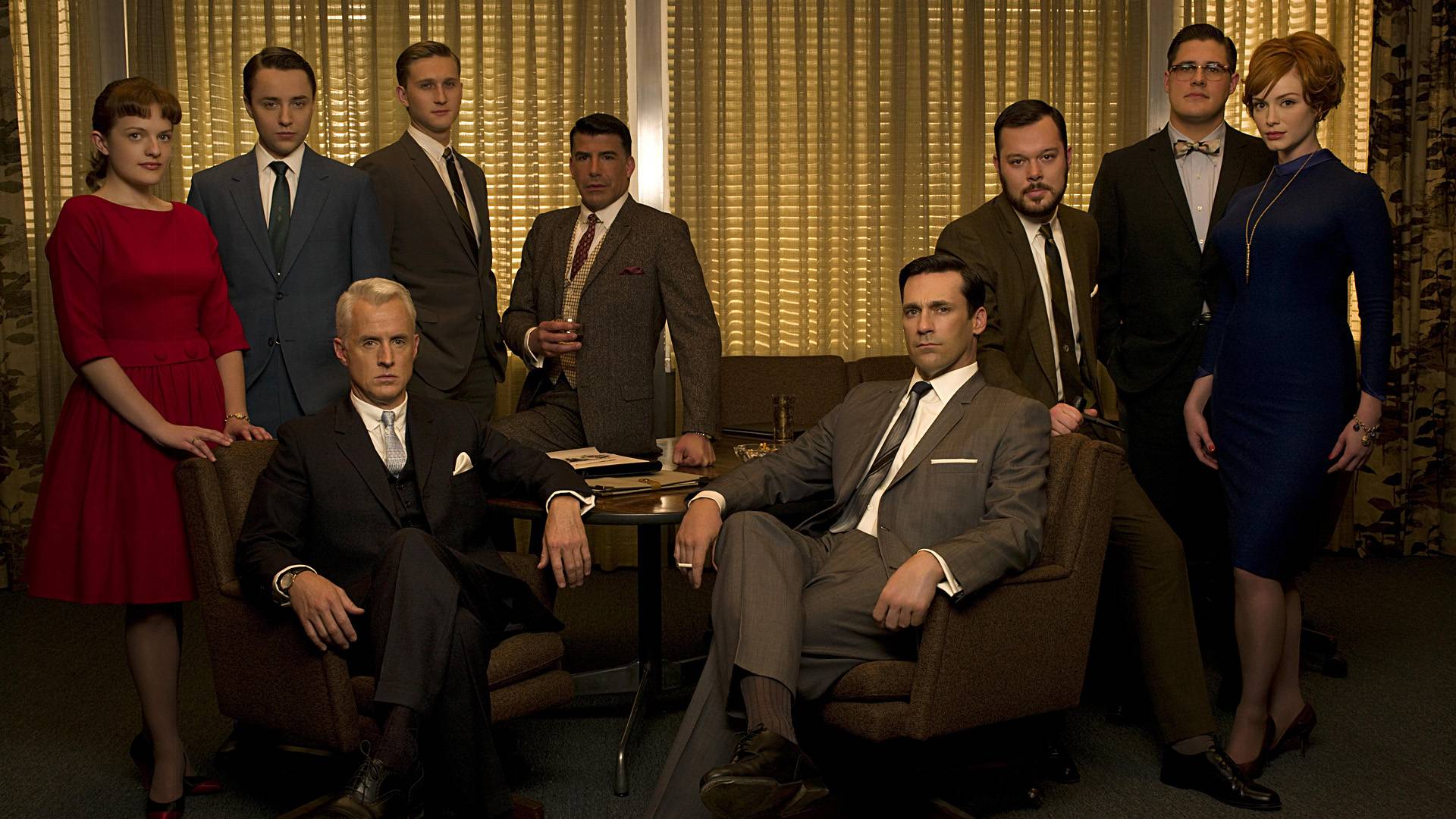 In self-quarantining for the last few months my watchlist has made an interesting pivot. I’ve found myself spending time re-watching familiar, hefty TV titles more than anything else. Not my typical forte, but it’s where I’m leaning these days and it has been oddly comforting. God help me, I started venturing back into Mad Men. Apparently I needed (more) damaged and devastating humanity in my life than what this pandemic was already providing. So, it may not be the most inspired choice, but Mad Men really is the Cadillac of 21st Century television.

All in all, season five stands as one of the single-greatest seasons of TV I’ve ever seen. Season four gave us that masterful episode, The Suitcase. Peggy’s character transformation was a rare Phoenix to behold; arguably the anchor of the whole run. The impeccable ladies weaving in-and-out from Maggie Siff, to Linda Cardellini, to Rosemary DeWitt, to Julia Ormond, to Neve Campbell, and Alison Brie. The production design; the cigarettes; the intimacy; the Slattery one liners; the carousel and countless other sharp pitches–Mad Men is a reservoir of doubt and despair but the kind that feels cathartic. The show is all killer, no filler in the most savagely nuanced sense. Oh, and the flawless series finale with that closing shot. *chef’s kiss*

Lest we forget the man himself, Don “Dick Witman” Draper. As iconic a performance and flawed, suave Everyman as modern TV will ever see. Jon Hamm truly delivered a turn for the ages. Even from the pilot episode were sucked into his dreary orbit hoping never to leave. 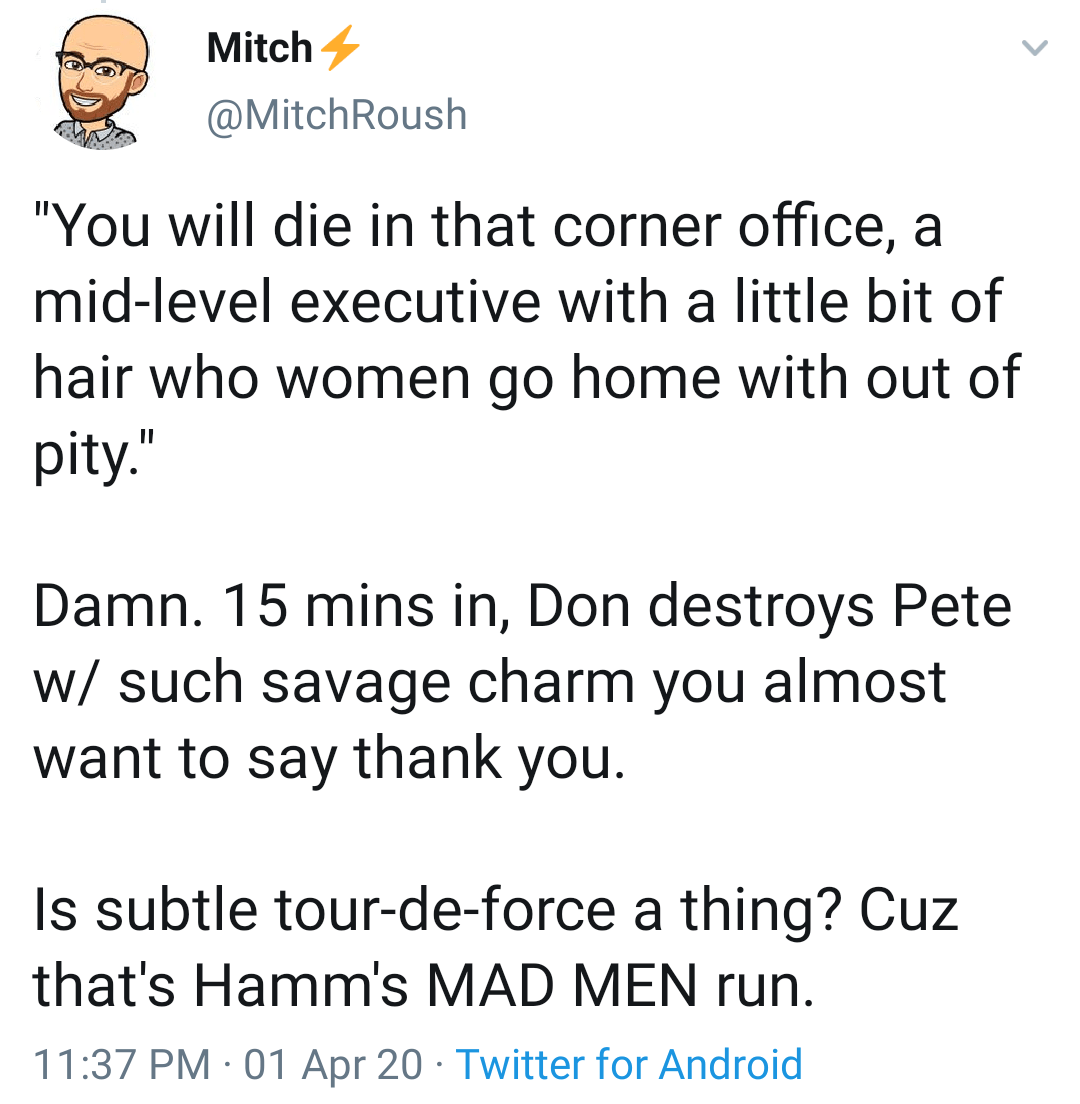 I don’t consider Mad Men a re-watchable series; most true, blue masterpieces aren’t. The layers are too thick to dwell in frequently. Perhaps that speaks to the legacy of what we deem masterful. Mad Men has been one of my favorite shows since it started airing, but it wasn’t until now that I began venturing through a second time. It’s an emotional commitment and, to some degree, damaging. That’s what makes it so great–that unmatched attention to detail and emotional devastation is a stiff drink of the finest sort. It takes intentionality to give yourself over to something like that again but it’s absolutely worth every second. Find your way back to the arena of 1960’s Madison Avenue for a change of pace … but only when you’re ready.

PLATFORM: Netflix
FOR FANS OF: Boardwalk Empire; Six Feet Under; The Sopranos 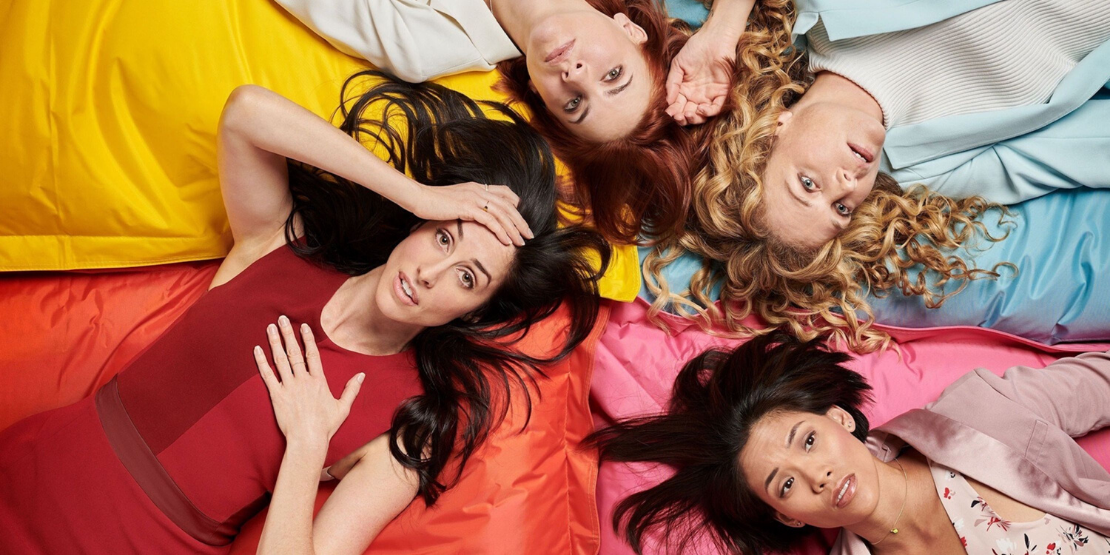 If you’re on the prowl for a perfectly binge-able comedy with plenty of raunch and sharp dialogue this one is your best bet. Honestly, it may be my favorite humorous series streaming right now. Why? Because Catherine Reitman. What Phoebe Waller-Bridge captured for bold, single, unkempt self-awareness in Fleabag Reitman is delivering for modern successful women with kids and imperfect 21st Century marriages. Through the prism of awkward playdates, glass ceiling shattering career moves, broken trust, leaking body parts, and delicious banter we explore what it looks like to balance motherhood and shrinking the pay gap in tight, hysterical fashion.

The big takeaway here, aside from Reitman’s staggering creative chops in writing, producing, and starring, is the perfectly played punch in the gut. Through all the funny arguments and situational humor are the sharp left turns of self-awareness that grant the whole piece an elusive, but earned third-dimension. We live and breathe with these quirky yet relatable characters. Modern love, relationships, and parenthood are a hell of a whirlwind–we’re lucky any of us survive. And with Workin’ Moms, we laugh all the way through to the deep feels and it serves like a breath of fresh air as much as it does an easy-to-watch romp. Pop this one into the rotation and find yourself flying through in no time. You’ll love every minute along the way.

And, season four just dropped so you’ve got every reason to dive-in!

PLATFORM: Netflix
FOR FANS OF: Dead to Me; Fleabag; Good Girls

Worried about an over-stuffed queue? Don’t be.

Add some of these ready-to-binge shows to your list and save your self-quarantine TV nights.  If nothing else, no excuses on finding something to watch when there’s Don Draper right there.