In 1984 or 1985 I saw Videodrome for the first time and it blew my mind. I think I re-watched it immediately, just trying to get a handle on what the hell I had just seen. Cronenberg’s films were always an experience – a potent combination of fear, flesh and fantasy that never failed to fascinate and repulse in equal measure. I loved Scanners and The Brood and of course his big breakthrough, The Fly, was just around the corner. Videodrome, though… Videodrome was something special. For the longest time Videodrome was my favorite Cronenberg film. (And may be again.) He’s made more polished films, grosser films, even stranger films (Naked Lunch qualifies on all those levels, actually) – but this particular movie has always just worked for me. Yes, the effects haven’t aged well, and the ending still frustrates, but in general I find that Videodrome always seems relevant. Even if community cable is about as dead as VHS. 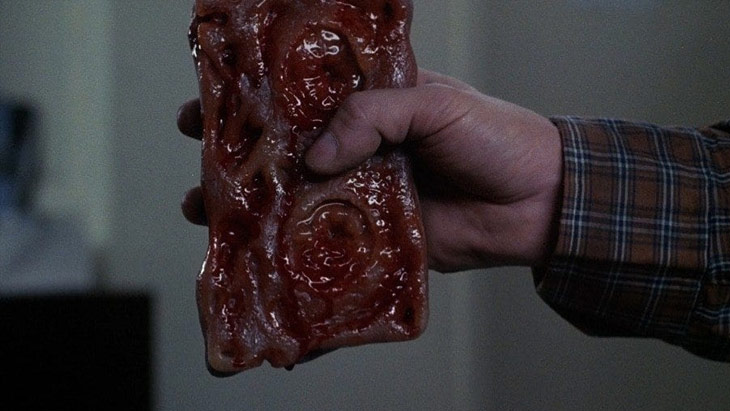 Somehow, I never got around to owning any of Cronenberg’s films until recently (starting with Criterion’s Scanners release). I’m not really sure why that is – I’ve owned like 10 versions of Evil Dead over the years, but no copy of The Fly or Rabid. Maybe it was because in the back of my mind I was always afraid that I’d go to watch one and find that it was breathing, pulsating, maybe even breeding with the other movies next to it on the shelf. Videodrome put THAT imagery in my head. Lord knows what else it put in there.

The Medium
A few years ago my wife got me the Criterion Collection release of Videodrome, and it’s gorgeous as all their releases are. If I’m honest, I like both the Godzilla and the Scanners packaging more, but it’s still pretty cool. The case itself is done up as a VHS tape (it actually looks more like Betamax, but whatever), complete with handwritten labels. The picture quality is as good as you’re going to get with an early 80’s Cronenberg picture, and is a far cry from the last few times I’ve seen the film, which were on VHS. There are a ton of extras as well – it’s definitely worth picking up.

The Movie
Max Renn (a typically jittery and slightly sleazy James Woods), the owner of an obscure Tornoto cable station, CIVIC-TV, is looking for something – anything – to help his small station break through with a larger audience. His engineer, Harlan, shows him a pirated broadcast of a show called Videodrome – something new out of Malaysia. CIVIC-TV already shows mostly softcore porn and violence, but Videodrome takes it a step further. It’s nothing but torture and murder in a red room with a red clay wall. Max is infatuated and orders Harlan, to start pirating the show for use on his station. 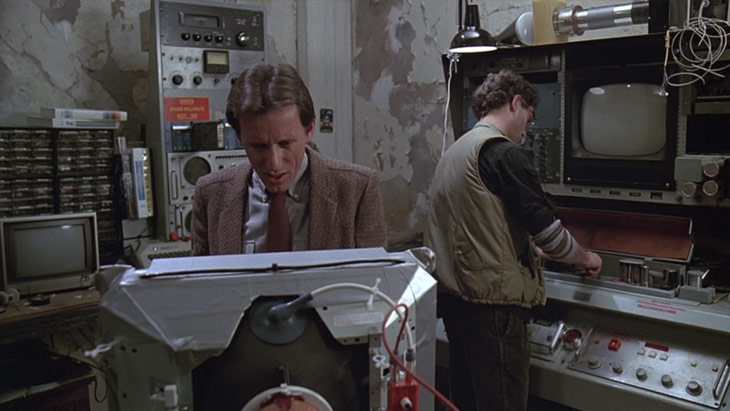 Nowadays the Videodrome broadcasts look a little tame. A little ‘soft’ in Max’s words. But Videodrome was made an age where you could only use the word ‘bra’ once in any given episode of a TV show. For the time it looked like it was just this side of a snuff film.

Later, Max appears on a local talk show (for a rival station, one assumes) where he’s pressed to defend his programming. He launches into a half-hearted defense of video pornography and violence as harmless outlets for his viewers, a way for them to experience things vicariously so they don’t pursue them in real life. He’s more interested in another guest, Nicki Brand (Debbie Harry), however, and the show concludes with a diatribe by someone called Professor Oblivion (Jack Creley), who only appears via a TV screen. Oblivion opines that television is becoming the dominant expression of reality for most people – that, indeed, TV will eventually replace reality. 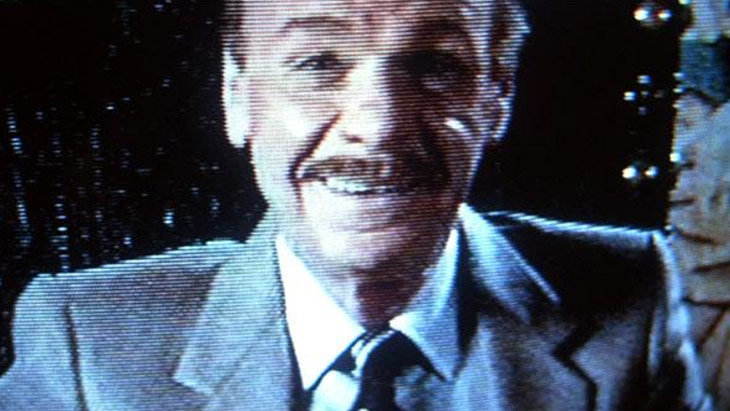 Max and Nicki start a relationship and one night at Max’s apartment she comes across videotapes of the Videodrome broadcasts. She finds the show incredibly exciting and convinces Max to engage in some cutting and mild bloodletting during sex, as Videodrome plays in the background. Max has a vision of them writhing together on the set of Videodrome. It’s a hallucination – his first. It won’t be his last.

I know I keep going back to talking about the context of this film – the mid 1980’s – but I’m constantly surprised at how tame things seem to me now. Things that seemed transgressive and violent and strange when I first saw them are… not necessarily passé, but acceptable, if that makes sense. Watching the lead singer of Blondie get her ears pierced by James Woods while he licked blood off the needle? That was some strong shit in Reagan’s America! 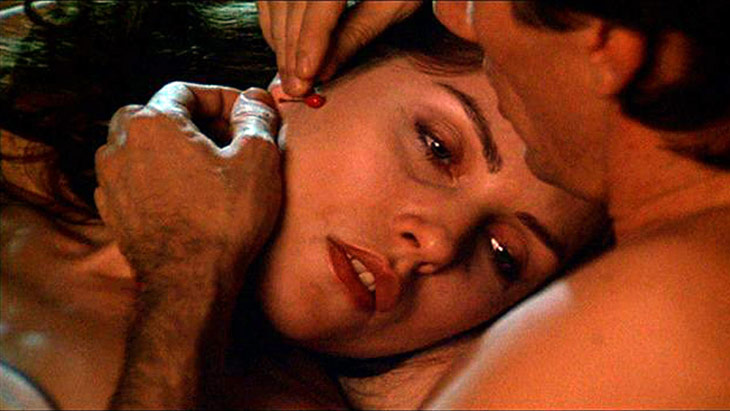 Harlan discovers that the signal is actually originating much closer than Malaysia – Pittsburgh, to be exact. Max tries to use contacts to get in touch with the producers, only to be told by his friend Masha to leave it alone. It’s not faked, she says – it’s REAL. And the people involved are dangerous, they’re not doing it for ratings or even creative vision. It’s all part of some political philosophy – they’re believers. Max manages to get a name out of her, though. Oblivion. Professor Brian Oblivion.

As Max’s hallucinations get worse, he manages to track Oblivion down to the Cathode Ray Mission, where homeless people are given food and clothing while they watch hours and hours of television. It seems weird, this sort of ‘TV soup kitchen,’ but in a world where society is defined by its communal experience TV was the biggest shared experience of all. The idea of letting the destitute keep that connection was ahead of its time. Today if you don’t have access through a phone or internet provider you can go into any public library and check your email, the news, browse your favorite blogs or post on Instagram. You can connect, keep plugged into the world. It’s a public service. I don’t look at the Cathode Ray Mission any differently now, as strange as it seemed at the time.

The Mission is actually run by Oblivion’s daughter, Bianca (Sonja Smits) who shares her father’s goal of replacing vast swaths of human experience with the televised equivalent. Later, Max receives a videotape of Professor Oblivion explaining that Videodrome is actually a weapon, a first shot in a war for the hearts and minds of the people of North America. The show is secondary, it’s the signal that’s broadcast with the show that’s the real key. It changes the viewer, causing a tumor to grow in the brain. The tumor causes the hallucinations – or is it the hallucinations that cause the tumor? 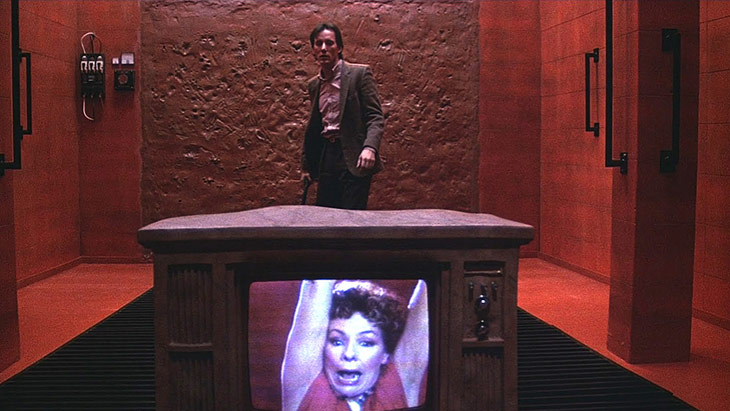 Many of Cronenberg’s early films express a fear of corporate or government conspiracy exploiting science for some dark and barely comprehensible end. Videodrome is no different, with a shadowy cabal who want to make North America strong by weeding out the weak, the deviant and the undesirable, turning them into programmed assassins for the new world order. Max has already begun to change and soon he’s completely under their control, programmed by videotape inserted into an orifice that opens up in his stomach. Betrayed by Harlan, who never really intercepted the Videodrome broadcast – he brought it to Max specifically.

The first time I watched the movie I took the more outrageous changes in Max – the stomach slot, the gun-hand – as if they were literal. That he was physically changing as the result of the Videodrome signal. I don’t think that’s the intent, though. I think we’re supposed to be seeing the film through Max’s eyes, and after a certain point he’s no longer viewing reality. Still, maybe Oblivion is right and TV is becoming reality, maybe Max is no longer just being programmed, maybe he’s programming the world around him. It’d make the ending of the film a little bit less of a dead-end moment.

In some ways, we’re safer than ever from a Videodrome world. Reality as represented by the cathode ray tube or LED display is no longer a few monolithic channels seen by all. Our communal reality is now realities. Our viewing is so fragmented these days – innumerable cable channels, YouTube, Twitch, Netflix – and those are mostly mainstream. You can find stuff way worse than Videodrome in a casual surf of the net. Hell, there are people Periscoping their own deaths. In a way, that makes us safer from a mass media conspiracy like Videodrome presents.

On the other hand, we’ve segmented ourselves into niche markets so readily that advertising doesn’t even have to do research anymore. They can target specific demographics directly via the websites they frequent, the cable channels they watch, the messageboards they post on. The realities we experience are getting more claustrophobic and insular, the people we share them with reflecting only our own expectations back to us. Actually, maybe we’re MORE susceptible to a reality altering signal – maybe somebody has started using one already.

The Bottom Line
Videodrome is a fantastic freak-show, a literal mind-bender that questions reality, physicality, sexuality and how we interface with our technology. It’s good stuff, weird and disturbing. One of Cronenberg’s best.