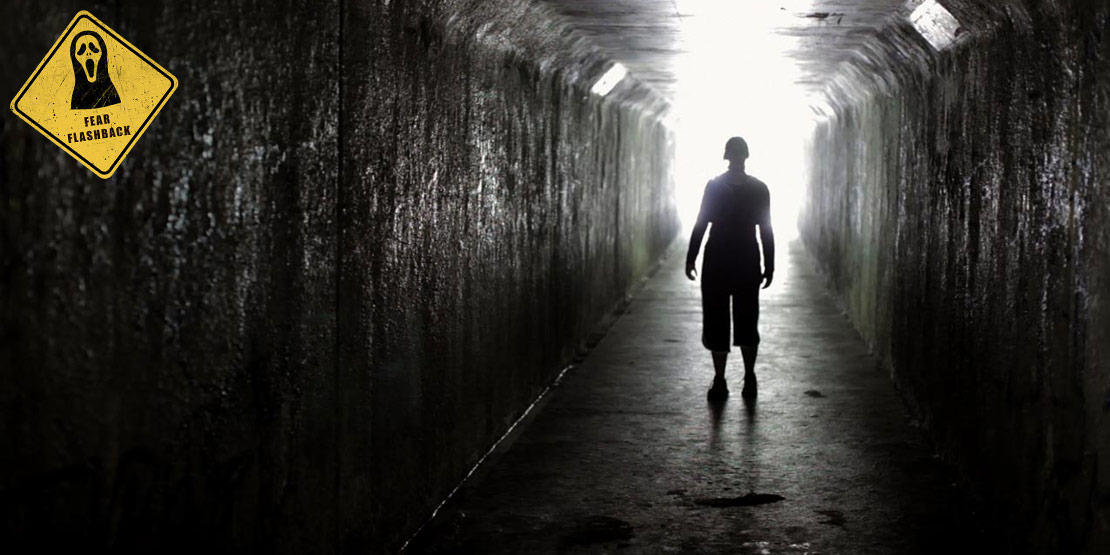 “…easier to embrace a nightmare than accept how stupid, how simple reality is sometimes…”

The vagaries of my migraine-addled brain continue to surprise me this month. Once again I descended to the basement with a particular film in mind – 1979’s killer bat film Nightwing in this case – and ended up picking something completely different. In the row of ‘yet to be watched’ discs I happened to catch sight of Absentia and thoughts of vampire bats on a Hopi reservation receded against the vague, unsettling memory of Doug Jones whispering “You can see me?” in a dark tunnel.

In 2011 Kickstarter was barely a thing. Started barely two years before, it wasn’t anything like the crowd-funding juggernaut it has become. That someone could raise money for a film via the platform and actually get it made? That would have been worthy of note by itself. That it also turned out to be an effective little creep-fest was a bonus. (I note that my own first Kickstarter contribution was in 2013 for the Veronica Mars movie… weird.) 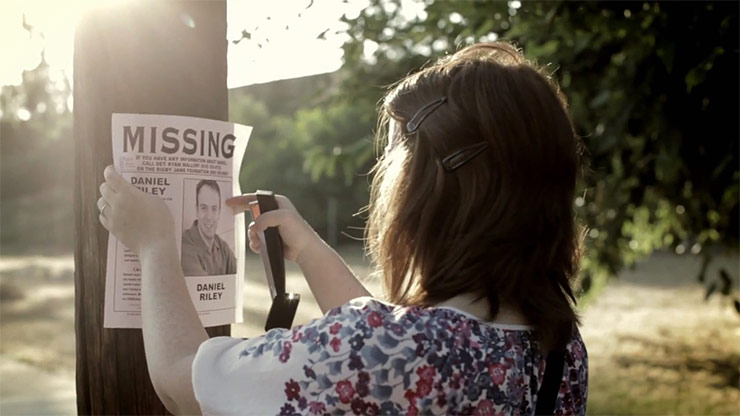 I’m not sure where I first saw Absentia. It might have been iTunes, of all places – or I might have gotten it from Netflix back when I had a DVD subscription. I remember enjoying it, though it had a lot of the drawbacks that low-budget films do – including a less-than-satisfying ending. I haven’t watched it since, so I’m looking forward to this viewing.

The Medium
I have the DVD release of Absentia from 2012. I think I picked it up for $1 at Goodwill. It has a few extras – including a documentary and commentary track. There’s no Region A blu-ray release, but I’m not sure it rally needs one. It’s a low-budget horror movie made on a DSLR, it’s not exactly eye-candy material.

Absentia is available streaming for subs from Amazon Prime and Shudder, as well as on Tubi (with ads) and Hoopla. You can also rent/buy it from Amazon and the Microsoft store.

The Movie
Absentia is about a woman named Tricia (Cortney Bell) struggling with the aftermath of the disappearance of her husband, Daniel (Morgan Peter Brown). It’s been seven years since he vanished without a trace and – despite the opening scenes of her replacing old “Missing” posters – she’s finally getting ready to move on and have him declared dead in absentia.

So, this is a low-budget film. An EXTREMELY low-budget film. The entire movie was shot on a Canon 5D Mark II digital SLR camera with no lighting kit – they used ambient lighting for 90% of the setups. This results in a faded look, shallow field of view and an almost “home video” feel. You start out with the impression that this was shot by a bunch of friends on a weekend in their apartment – which is sorta-kinda true. That being said, there is an eeriness to the proceedings, even early on, and the acting is better than you’d expect from this level of production – with Bell and Katie Parker (as Tricia’s sister, Callie) doing most of the heavy lifting. 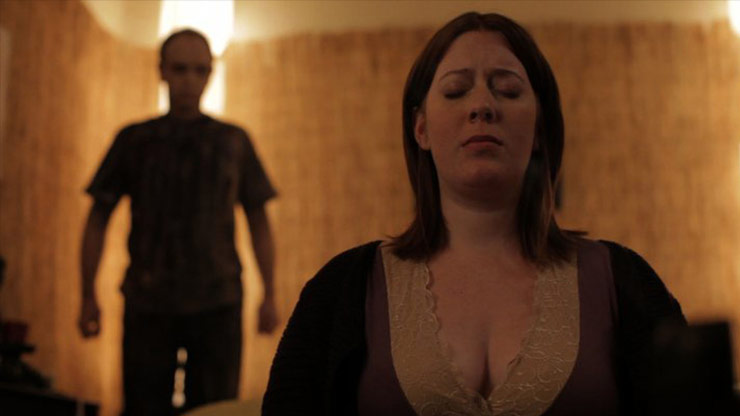 Callie is a recovering drug addict and has come to help Tricia finish the paperwork and find an apartment. To help her move on, in other words. There’s also a detective, Mallory (Dave Levine), who was assigned to the case and who has taken more than a professional interest in Katie (as her pregnancy attests). The horror, what there is of it at this early point, is primarily in the visions Katie has of Daniel. Her therapist tells her that these are simply manifestations of her guilt over finally letting Daniel go, of giving up on him. They’re disconcerting and effective, despite coming from an era of horror that thought blackened eyes and distorted open mouths were the height of spooky imagery. A scene in which Katie tries to meditate while  a vision of Daniel hovers over her shoulder and mutters darkly about abandonment and other, less definable things, is particularly effective.

Callie – still struggling with her addiction – jogs every day through a nearby tunnel that connects the neighborhood to the larger city. One day she comes across a vagrant (Doug Jones) lying in the middle of the tunnel. Despite her best efforts to sneak by he awakens and seems surprised that she can see him. His name, he breathlessly tells her, is Walter Lambert, and he asks her to tell his son that she’s seen him. She runs away, but returns with food later only to find that he is no longer in the tunnel. 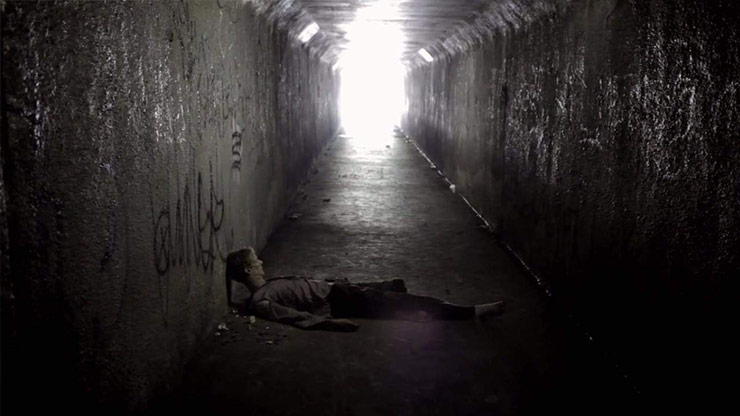 Absentia is low-key in its horror, but things begin to pile up. We see a lot of missing posters – pets at first, but as the film progresses we see more signs like the one of Daniel that Katie was putting up. Somebody leaves a pile of objects –silverware, jewelry – on the doorstep and Callie returns it to the tunnel, assuming that Walter left it as payment for the food. At the tunnel she meets a young man who urges her not to leave the objects even as he discards a plastic bag at the entrance. Then a larger pile of objects appears on Callie’s pillow and the police become involved.

This is all happening around Katie’s struggle with letting Daniel go. The visions, the way she’s been packing to leave for years without even looking for a place to go, the meditation, the lawyers… the loss. The way the film deals with the fallout of an unexplained death is the anchor for the film. It feels real, the actors make the most of that sense of loss, grief and bewilderment. That feeling of being unable to move on because… what if? Somehow Katie – with her sister and her wannabe cop boyfriend supporting her – is able to sign the papers declaring Daniel dead. To let the phantoms fade. To find an apartment. To go on a date.

And then Daniel shows up.

The rest of the film engages more directly with the horror it’s only hinted at to this point.  Daniel cannot remember – or cannot coherently relay – where he’s been or what has happened to him. “Underneath,” he says, and whispers to Callie about a “trade.” He also tells Callie that he wishes she hadn’t brought things to the tunnel. “It obsesses,” he whispers, though what it is remains unexplained. (A children’s book about the Three Billy Goats gruff connects it to the troll beneath the bridge, sounds and shadowy movement seem insect-like, and Callie’s internet research suggests that whatever it is has been around for a very long time.) At the same time the young man Callie met at the tunnel turns out to be Walter’s son and he’s been bringing animals in a plastic bag to the tunnel, leading the authorities to suspect he’s a serial killer.

Katie’s life is upended, but the level of care shown to dealing with the aftermath of Daniel’s disappearance isn’t given to the results of his return. Not that there’s time. There are deaths, more disappearances and one long, slow zoom onto a dark space that is excruciatingly tense. The ending is rushed, but with the slow buildup it almost feels cathartic for all that tension to finally do something – even if we’re not sure what, exactly, that something is. 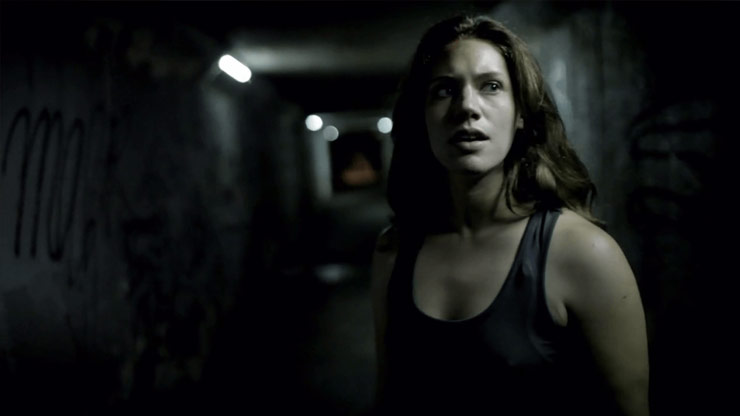 Not everything works. Callie’s rushed explanation for events starts out being eerie and then veers into “crazy conspiracy” theory and nonsense. Not all of the actors are quite as good as Bell and Parker – particularly the police officers. There’s a rushed feeling as the film goes that contributes to a sense of confusion about later events. That impression of “home video” rears its head at weird times.

Director Mike Flanagan has gone on to bigger films since this – including Oculus and last year’s Doctor Sleep – and you can see that he already had a feel for what makes horror work. It’s basically a bunch of friends (and Doug Jones) getting together to make a movie on the weekends, but it still manages to deliver with characters and tension and the occasional scare. 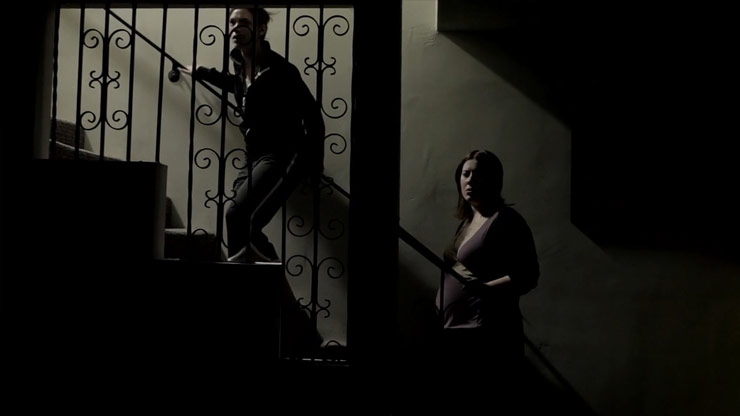 The Bottom Line
Absentia is an effective, low-budget horror movie that focuses more on mood and tension than in jump scares and gore (though there are a few of those jump scares to be had). For a film whose initial budget was something south of $30k the film does a great job creating realistic characters, an eerie mood and moments of actual horror. It can be slow and rough in spots, but there’s enough good material to keep you entertained, and that moment of staring into the blackness, trying to see something, anything, is as good a scare as you could get in anything with ten times the budget.

Note: If you’re interested  due to the way Kickstarter maintains its content, you can still see the original Kickstarter listing: https://www.kickstarter.com/projects/fallbackplan/absentia-a-new-vision-of-horror-from-mike-flanagan-0 – with links to the (still up) YouTube pitch videos!