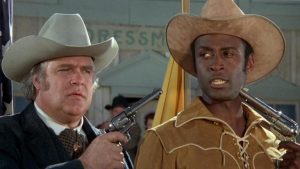 Whenever someone talks about a film that is a landmark of cinema or is declared by the National Film Registry as being “culturally, historically, or aesthetically significant”, movies like Citizen Kane or The Godfather might come to mind. Perhaps one might imagine a David Lean epic. One might think of human drama writ large on a grand scale. A rapid-fire comedy featuring flatulent cowboys, dick jokes, and a climax that literally breaks the fourth wall to spill out onto the streets of Hollywood probably isn’t the first thing that comes to mind. Maybe it should be, though.

Mel Brooks’ Blazing Saddles (1974) is that kind of film. Significant and puerile. Smart and sophomoric. Crass and crafty.

Blazing Saddles tells a familiar story. A town in the wild west is threatened by a gang of bad guys and pleads for help. Help arrives and the bad guys are defeated. The end. This basic structure, though, is the least significant thing about the movie. It’s pitifully simple. But that’s okay, because this movie isn’t about plot. It’s a satire, and as satire, it’s about something else entirely.

Blazing Saddles is one of those movies that has stood out in the cultural zeitgeist ever since it was released. Everybody knows that it’s a comical sendup of racism and racial stereotypes. But it’s just as effective at poking fun at and dismantling the tropes and clichés of the American western as it had been established since the silent era. In particular, Brooks satirizes the wholesome view of the west that was particularly prevalent in the westerns of the 50’s and early 60’s, the decades immediately prior to Blazing Saddles’ release.

When construction of a railroad needs to be rerouted through the small town of Rock Ridge, politician Hedley Lamarr (Harvey Korman) realizes that the real estate would be worth a fortune. He therefore sends a gang of thugs led by his flunky Taggart (Slim Pickens) to run the peaceful citizens of Rock Ridge out of town. The townsfolk appeal to the governor William J. Le Petomane (Mel Brooks) to send a sheriff to defend them. Under the advice of Lamarr, the governor sends Bart (Cleavon Little), a black man who was scheduled to be hung for assaulting Taggart to be sheriff. The logic being that the townsfolk will reject the sheriff, chaos will ensue, and the town will be ripe for the taking.

Sheriff Bart shows up and is immediately rejected by the townspeople. Through his wits, good nature, and the help of the alcoholic gunslinger the Waco Kid (Gene Wilder), he wins over the citizens of Rock Ridge and defeats the bad guys.

“I hate to disappoint you, ma’am, but you’re sucking my arm.”

The film went through four or five drafts by several writers. Brooks remarked that the madcap experience reminded him of working in the writer’s room of Your Show of Shows. He had one rule for he and his writers: “Don’t write a polite script.”

Among the writers was Richard Pryor, who Brooks wanted in the lead role of Bart. Warner Brothers balked at the idea, though, because Pryor had at that time a reputation of being “unreliable” due in part to his fondness for drugs. In witty and likable Cleavon Little, though, Brooks found the perfect Sheriff Bart.

Though Gene Wilder was initially approached by Brooks to play the role of Hedley Lamarr, Wilder turned the role down, thinking he wasn’t right for it. After a few actors including western actor Gig Young didn’t pan out, Brooks went back to Wilder for the role of the Waco Kid.

The censors at Warner Brothers were continually worried and antagonized by the racy script, which leaned heavily into sexual innuendo, bathroom humor, and the use of the “n-word.” Mel Brooks had control of the final cut, however, and stuck to his guns on nearly everything. The only line he cut was during the scene where Madeline Kahn’s Lili von Shtupp seduces Bart. After wondering aloud if it’s true that “you people are…gifted,” the lights go out and she exclaims “it’s true!” Bart then delivers the hilarious line that didn’t make the final edit: “I hate to disappoint you, ma’am, but you’re sucking my arm.”

During filming, several of the white actors balked at the liberal use of the “n-word,” expressing their discomfort to their co-star. Both Little and Pryor encouraged their white colleagues to read the lines as written and not shy away from it.

A film this subversive, taking aim not only at racism, but the sacred cow of the American western was a risk, especially considering the subject matter of some of the jokes. John Wayne, icon of the traditional western, once remarked that he had heard that Brooks was making a western where someone said, “Blow it out your ass.” Brooks replied, yes, “and I want you to be in it.” Wayne replied that he couldn’t appear in a movie like that, but he’d be the first in line to go see it. The Duke was onto something. Blazing Saddles would be a hit upon release. Though it received somewhat mixed reviews from critics at the time of its release, it was only the 10th film at the time to have passed the $100 million mark.

Mel Brooks has said that the criticism of racial prejudice was the engine that drove the movie. Indeed, racial stereotypes are a huge source of the film’s comedy. It’s primarily the film’s main theme: racism is dumb. But in addition to lampooning racism, it’s a satire that deflates the myths of the old west and the clichés of 20th century film and television westerns.

The western genre was already going through drastic changes. The straightforward good vs. evil paradigm present in most traditional westerns was on its way out in favor of more complex characters and situations found in films such as Leone and Eastwood’s spaghetti westerns. This raunchy comedy was another nail in the coffin.

Though it’s racy, vulgar, and irreverent, the film has a good heart and has come to be considered one of the classic comedies in American film history.

What Blazing Saddles Means to Us

“The perfect family movie. You may think that’s a joke, but there aren’t many movies that aren’t true story/biopics that my dad will sit down and watch (let alone REWATCH). Blazing Saddles is one of those movies. Mel Brooks, Gene Wilder, Richard Pryor, the comedic talent associated with this film is insane! But what has probably contributed to its longevity the most is that it is unapologetically anti-PC. Plain and simple, this film could never be made today. All it’s best jokes would get someone offended! And trust me, there’s a lot of jokes I’d consider the best in this film. Honestly, at some point over the years, the jokes themselves became funnier to say than to watch on the screen. “Someone needs to go back and get a shitload of dimes” and “A wed wose, how womantic” are just a couple quotes I probably utter a handful of times throughout the year. There’s countless more, but at some point I’d just be writing down the film’s whole script. It’s that funny. Every joke lands, and with every new minute of footage the film just gets more absurd and wacky. It’s Mel Brooks at his best.”

Got any memories watching Blazing Saddles that are worth sharing? What about  a fun fact or piece of trivia on the film? Share them down in the comments below!