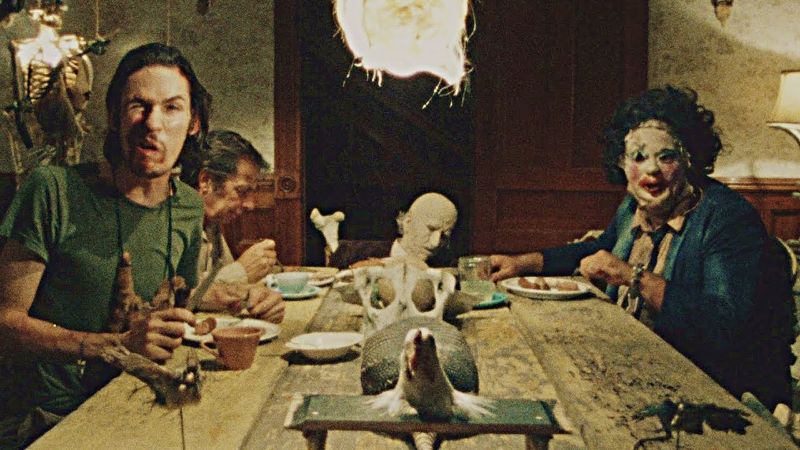 The film which you are about to see is an account of the tragedy which befell a group of five youths, in particular Sally Hardesty and her invalid brother, Franklin. It is all the more tragic in that they were young. But, had they lived very, very long lives, they could not have expected nor would they have wished to see as much of the mad and macabre as they were to see that day. For them an idyllic summer afternoon drive became a nightmare. The events of that day were to lead to the discovery of one of the most bizarre crimes in the annals of American history, The Texas Chain Saw Massacre.

The narrator’s voice (John Larroquette from Night Court) is seared into my brain as I read those words. I can only imagine hearing this in a dark and dingy theater not knowing if these events were true or not. At the time, audiences were not ready for the realistic nature of how director Tobe Hooper decided to film the movie. However, Hooper was so masterful at how he captured the violence, you would be hard-pressed to believe there isn’t much blood and gore. He made this film to leave a lasting impression on a generation and that is exactly what he accomplished.

What TCM Means to Us

When I was a kid, I thought The Waltons and Little House on the Prairie were made at the time they were set. I understood that they were TV shows and that they were fake but I thought the actors were from the 1800s. I always knew it wasn’t real and I knew time travel was involved (I wasn’t that dumb), I just didn’t connect the dots that someone could make a show about the past. I thank God for that adorably ingenuous mindset because it’s the only thing that saved me from getting fucked up after watching The Texas Chainsaw Massacre when I was younger. I had no concept of a snuff film or anything like that, so I never thought it was real but I did think the actors in it were really insane. Much like how I believed DiCaprio was mentally handicapped in What’s Eating Gilbert Grape, I thought the director found a group of crazy people and then decided to make a movie about them. It never occurred to me that they were actors playing a role; the Leatherface clan were crazy people and I think that belief left a stronger impression on me than if it had just scared me. Because if it had only just scared me, I’d only be afraid of the characters (and possibly chainsaws) but because the film was so believable in its depiction of horror, it made me come to terms with the fact that fucked up evil people exist and that they’re capable of anything.

For the longest time, I couldn’t bring myself to watch The Texas Chainsaw Massacre.  I’d heard of it as a legend, a terrifying “absolutely true” story when I was a kid and had never really gotten over the dread and horror it engendered in me. It grew, somehow, in my mind as the years went by. It became some apotheosis of horror, a gruesome and grueling experience only one step removed from a snuff film. It put paid to all my notions of being a hardened connoisseur of horror because I was afraid of it. Afraid of a movie. I was forced to watch it once in my teens and I had a bit of a panic attack. Even now I can only remember flashes of that viewing. The hitchhiker cutting his thumb, Leatherface slamming the door shut, the only really gory bit where Leatherface falls and the chainsaw cuts into his leg. The screaming. It was all vaguely stroboscopic in my mind – flashes only. And then it was over. And I remember thinking, “There. I’ve seen it. Now I never have to see it again.” And I didn’t. For YEARS. Then when Marilyn Burns passed away in 2014 I finally made myself watch it again – lump in my throat,  hammering heart and all, and… it was a revelation. It was really good. Hell, it was GREAT. Grimy and raw, but that’s part of what makes it so good. It feels real, and as such you become invested and a little bit scared. I wish I’d made myself watch it sooner because it’s a truly fantastic horror film. One deserving of all the accolades it’s accrued – and even worthy of a couple of decades of dread from me.

Writer-Director Tobe Hooper has consistently stated that TCM was a product of the cultural and political landscape of post-Vietnam and post-Manson America. He starts the film off by lying to the audience with the “film you are about to see is true” opening statement because of the way he felt the government had lied about things going on around the world. He had already developed the idea for a movie about elements of isolation, the woods, and darkness but added an aspect of the film from a real-life monster named Ed Gein. Gein would commit heinous crimes in the 1950s and would also inspire other horror classics like The Silence of the Lambs and Psycho.

Co-writer Kim Henkel on her inspiration for the screenplay,

I definitely studied Gein … but I also noticed a murder case in Houston at the time, a serial murderer you probably remember named Elmer Wayne Henley. He was a young man who recruited victims for an older homosexual man. I saw some news report where Elmer Wayne … said, “I did these crimes, and I’m gonna stand up and take it like a man.” Well, that struck me as interesting, that he had this conventional morality at that point. He wanted it known that, now that he was caught, he would do the right thing. So this kind of moral schizophrenia is something I tried to build into the characters. 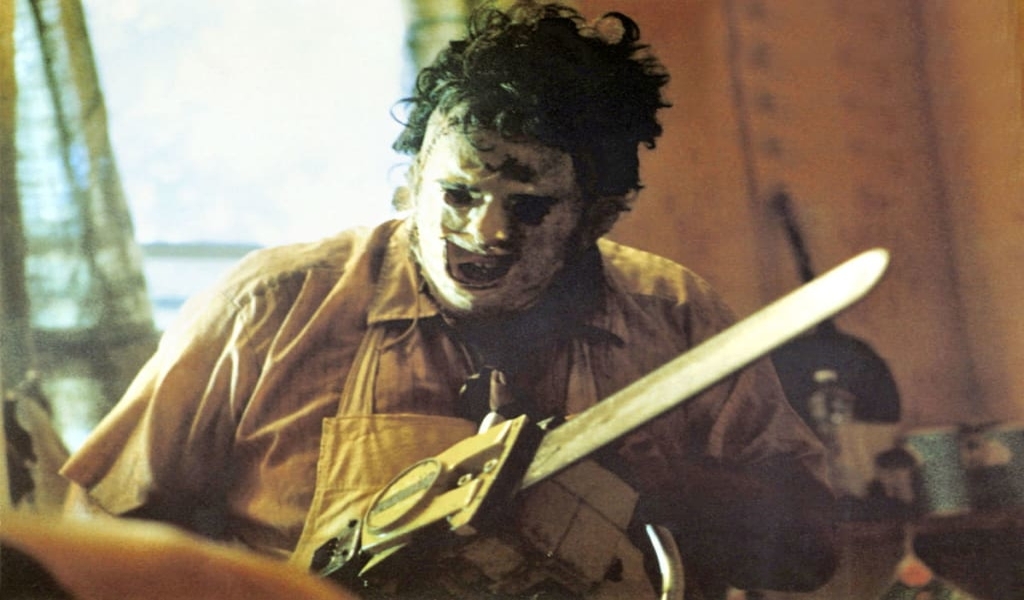 Before famous masked killers and slashers such as Michael Myers, Jason Voorhees, Freddy Krueger, and hundreds of other imitators, there was Leatherface. Hooper was inspired to create the psychotic killer Leatherface based on something he once heard from a doctor he knew, who “bragged about making a mask from a cadaver during his pre-med days.” He also stated he got the bright idea of using a chainsaw as a weapon to easily get through a mass of people while in the power tool section of a busy department store.

Enter an Icelandic poet with an imposing presence, Gunnar Hansen. Hansen wasn’t the first choice to play the famous villain stating, that his predecessor got last-minute jitters “about karma and his soul — it was the ’70s, after all.” He regarded Leatherface as mentally challenged and created the character by spending time at a school for developmentally disabled children where his mother worked. “I found that the key to unifying the character was all in the gesture,” Hansen said, “the way I moved my right arm, pulling it toward my chest. Then the body followed.”

Combine Hooper’s direction with Gunnar’s hulking size while wearing a human skin mask and wielding a chainsaw and you have yourself an iconic villain for the ages.  Although Leatherface would go through some changes through the years, he would be the driving force behind the franchise and be revered as one of the greatest horror characters of all time. 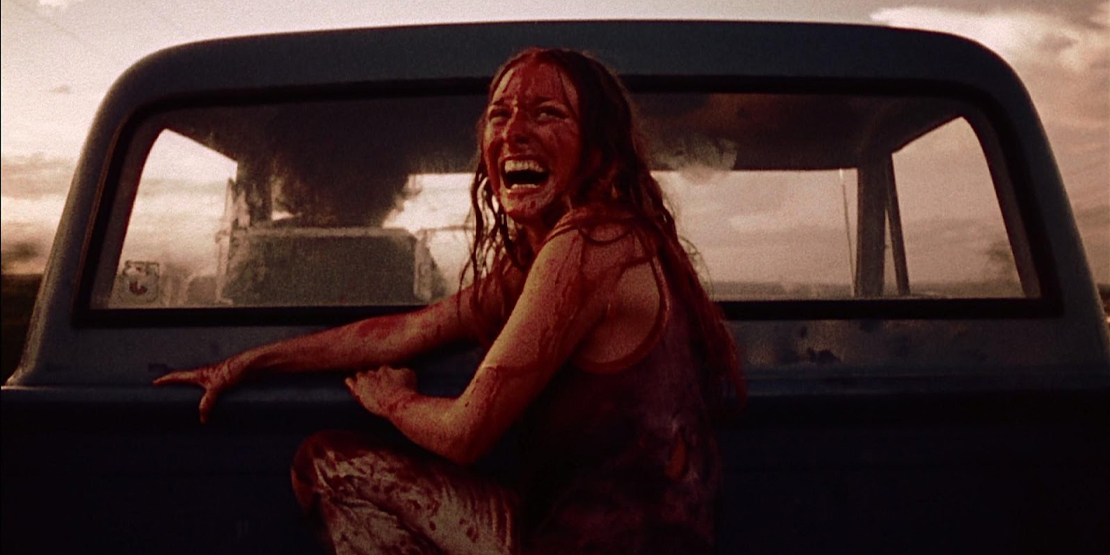 Sally Hardesty is widely regarded as the first final girl as she not only survived the chainsaw-wielding monster but also helped give a mold for future final girls to come like Laurie Strode of Halloween and Nancy Thompson A Nightmare on Elm Street. Sally wasn’t portrayed as overtly feminine or sexualized. She was selfless and helped take care of her paraplegic brother. She goes through absolute hell mentally and physically and somehow was the only one from her group to survive. Her incredibly intense escape as she is chased by the hitchhiker and Leatherface with the chainsaw revving the whole time along with her dive into the back of the truck to finally find safety simply became iconic.

The Legacy of The Texas Chainsaw Massacre

Tobe Hooper’s The Texas Chainsaw Massacre helped define the slasher genre but also transcended it at the same time. TCM is a raw and artful piece of horror that still packs an unsettling punch today. What Hooper was able to accomplish on a shoestring budget and the impact it would have on horror for years to come is downright masterful. His movie would set up several slasher must-haves. A group of young adults viciously attacked by a masked killer with there being a final girl to survive all the horror would be a calling card for the genre that would explode just a few years later. The use of power tools as weapons weren’t the norm in movies until people witnessed Leatherface wielding a chainsaw. That influence even carried over to video games.

The film practically invented the indie horror scene. Young filmmakers saw how successful Hooper was with the limited resources at his disposal and thought they could replicate that same magic. The Blair Witch Project would be the most famous example of utilizing several of the same tools that Hooper and co. used to make TCM. Its influence and impact has lived on for more than 40 years and will continue to live on in the hearts of horror fiends everywhere.

What are your feelings about The Texas Chainsaw Massacre’s impact and legacy? Where does it rank in horror for you? Have any fond nightmares from watching it the first time?