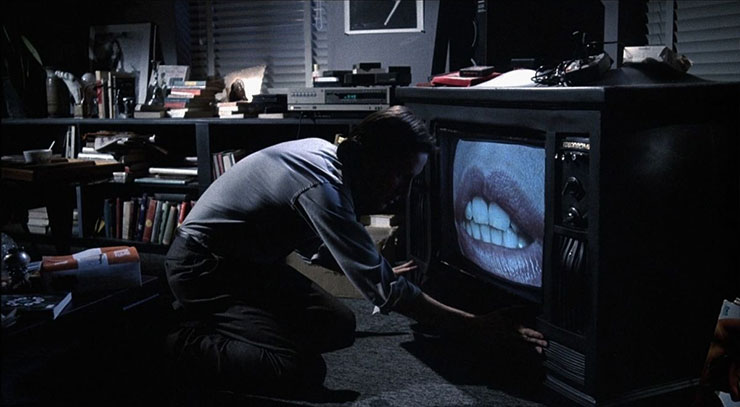 “You’ll have to learn to live in a very strange new world.”

Sex, technology, conspiracy, violence and madness. Videodrome, David Cronenberg’s sixth feature film, gleefully mixes a number of subjects near and dear to the modern human condition. On one level it’s a film about how sex and violence can be used by the unscrupulous to change behavior. On another it’s about how a world in which our interactions are increasingly conducted through screens is essentially dehumanizing. On yet another it’s a big middle finger to censors and prudes.

If I had to limit my description of Videodrome to a single sentence, though, it would be this: it’s a film about how our interaction with technology is changing us and warns that the would-be gatekeepers of that technology are poor shepherds of a new kind of humanity.

What Videodrome Means to Us

One of David Cronenberg’s most beloved films by fans, it follows James Woods as a sleazy cable TV programmer whose life begins to spiral out of control once he stumbles about a broadcast signal featuring extreme torture. The concept stemmed from Cronenberg’s childhood when he used to pick up television signals from Buffalo, New York after Canadian channels had gone off air, and his childhood worry of seeing something not meant for public eyes. The surreal imagery combined with special effects master Rick Baker’s work on the film combined to create one of the strangest, entrancing horror films way ahead of its time.

This was one of the earliest movies I watched at a young age that melted my mind with what I was seeing on screen. I didn’t understand any of it, but was simply glued to the horrific images in front of my face. This would be one of the first movies where I searched out the director’s other films, with Cronenberg becoming one of my all-time favorite directors.

Televisions covered in human skin, hands fused around firearms, pulsating, fleshy video cassettes and bodies with orifices designed to receive them. David Cronenberg is a name synonymous with the concept of body horror – something he’d take into the mainstream with 1987’s remake of The Fly – and Videodrome is the apotheosis of his fascination with our sticky, slick and blood-filled sacks of skin. 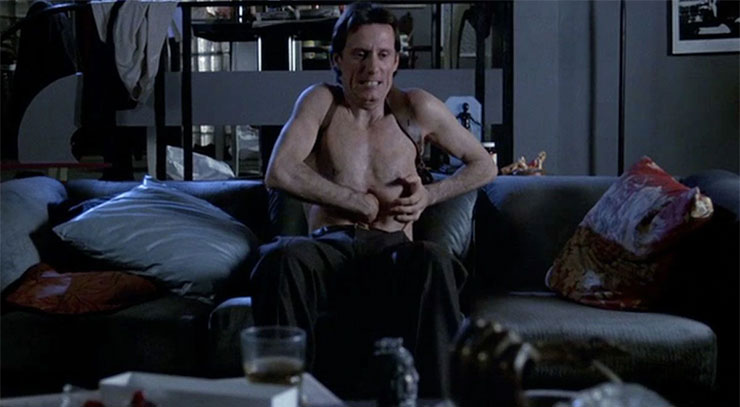 Special effects artist Rick Baker had proved with An American Werewolf in London that he could twist and transmogrify the human body in horrifyingly realistic ways. David Cronenberg would test even his amazing talents, however.

Think about that for a second. This is a film in which a man erupts with bloody, bulbous tumors – literally splitting his head open. Where a man shoves a slick, pulsing VHS tape into another man’s stomach. Where our lead character jams his entire head into the bulging, glowing lips on a television screen. And yet there were some things that even Rick Baker could not do. I’m not sure we even want to know what those things were.

Though time and technology have progressed and some of the SFX now look a bit clunky or dated, they nevertheless remain effective and repulsive in equal measure. Max’s horror at discovering his hand – gun included – has grown over into his stomach will always be a moment of both horror and hilarity. The image of the gun stretching out from the TV set before it explodes in a shower of intestines will always be the last, lingering image as the credits roll. Cronenberg’s fascination with our tender flesh and fluids mirrors our own – he’s just much more willing to show what we flinch away from.

Script on the Fly – the Making of Videodrome

Cronenberg’s previous film, 1981’s Scanners, was his first box office success and as a result he was offered a number of filmmaking opportunities.* He turned them all down in order to concentrate on making his own stories. Videodrome was one of these – based on picking up stray, late-night signals from New York TV stations when he was a kid and wondering if he might see something disturbing. Unlike Scanners, which was a notoriously difficult shoot due to an unfinished screenplay, Cronenberg started production on Videodrome with a complete story. It just turned out to be unfilmable. 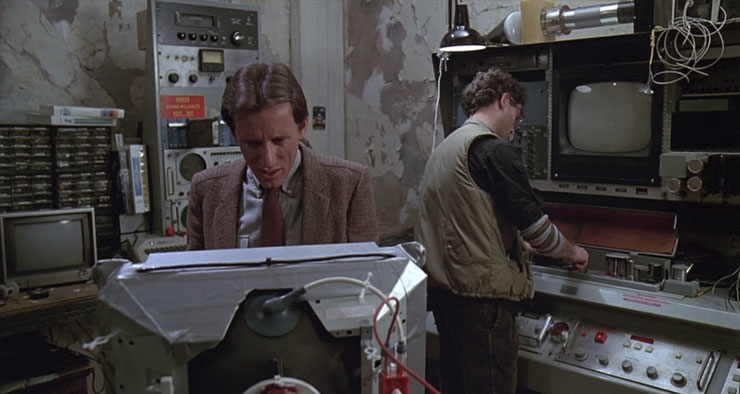 In his book on the production of the film, Tim Lucas talks about how Cronenberg purposefully wrote a screenplay that contained no limits. That he wrote without worrying about whether a particular scene was possible to film or even if it made sense in the larger context of the story, letting his imagination run to any level of gory or sensual excess.

“…I had written it in a more extreme fashion than I would want to see it on the screen myself.”

The end result of needing to tame the script for filming was that Cronenberg once again found himself with an unfinished screenplay – a toned-down second draft. Re-writes were a regular occurrence and continued all the way until the last day of shooting. The actual ending – a downbeat moment with James Woods‘ character, Max, and a fleshy TV set in an abandoned cargo ship – initially contained a followup denouement with Max and Nicki on the set of Videodrome itself. A ‘happy ending’ Cronenberg style. 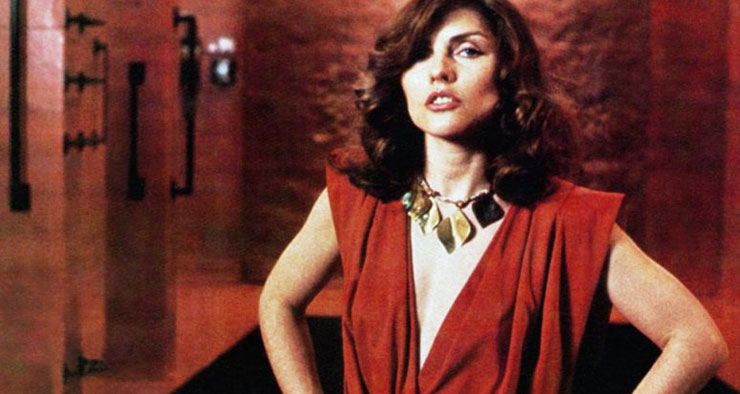 Despite the rewrites and changes – including a wholesale removal of an intended series of video ‘glitches’ that would indicate when Max is seeing the Videodrome version of reality – the movie holds together remarkably well. The layered stories of a man slowly descending into a world where reality is defined by his connection to technology and how a shadowy right-wing cabal is manipulating the same technology to destroy “perverted” elements of society works, somehow. (Though it might require multiple viewing to parse out the details.)

The novelization of Videodrome, by horror author Dennis Etchison under the pen name of Jack Martin, contains some elements of earlier drafts of the script due to the lead time needed to complete the book. It’s worth a look for fans, if only to see some of the scenes (like a certain TV in a bathtub sequence) that were cut for time or other reasons.

Videodrome did not do well at the box office. Despite a series of decent reviews, the film tanked badly enough that Cronenberg next ended up taking on the directing duties for the adaptation of Stephen King’s The Dead Zone, the first time he would work on a film he had not written himself.

*This is the film Cronenberg decided to make instead of taking a job directing Return of the Jedi, by the way. And what would that film have looked like if had chosen to do that instead? I’m guessing the Ewoks would have been far more disturbing than they already are…

The thing about Videodrome that makes it a cultural touchstone is the way in which it’s extrapolation of human themes, wants and needs (to get all Mazlow’s Hierarchy in the joint) remains relevant, despite the dated technology and somewhat passe’ sado-masochism. Humanity’s development of technology and our need to adapt to it (and it to us) is an essential part of the film, even if the director’s view of our struggles is one seen through a glass darkly.

“Soon, all of us will have special names.”

That quote, by the character Professor Brian Oblivion (Jack Creley, doing his best impression of Marshal McLuhan with his “the medium IS the message” pronouncements) presages the use of screen names by roughly a decade. Most of us have our real life names and the ones we go by on the Internet – which has supplanted television as our drug of choice in most of the ways that matter. They’re how we represent ourselves to a larger world – as much a part of who we are as our own names or nicknames. (That I use my own name in online discourse used to mark me as something of an outsider, though that’s less the case now.) 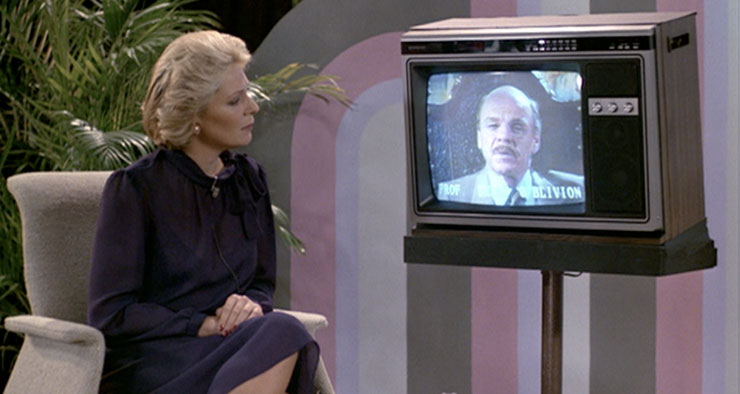 The Cathode Ray Mission, a location in the film where the homeless and otherwise downtrodden are allowed a meal and unfettered access to television, seemed odd to me when I first saw the film. I think it was intended to unsettle, a visual representation of the “TV will supplant reality” philosophy of Professor Oblivion and his daughter. Somehow in the intervening decades it’s become less strange. Television was the universal language in 1983, but now we live in a world where the internet is increasingly required to interact and access information, so the ability to connect to it has become a public service. You can walk into any local library and get online, check your mail, shout at strangers and contribute to your favorite community (I suggest SAW, it’s fun and mostly Videodrome-signal free. Mostly.) If I saw a combination soup kitchen/wi-fi hotspot now I wouldn’t blink an eye.

As with many of Cronenberg’s early films, Videodrome also concerns itself with the machinations of powerful forces behind the scenes – whether those forces are political or corporate seems never to matter that much, and perhaps that’s the point. The idea of people or institutions with ideas and agendas – with a ‘philosophy,’ to quote the film – might be affecting what we see and hear isn’t some abstract concept in our modern world. It’s a fact. That we’re aware of it might mitigate some of its affects, but what about the manipulations we’re not aware of? We’re all engaged in creating our own Videodromes, our own segmented realities where what we see and hear is just exactly what we want to, were the only people we interact with are the ones seeing and hearing the exact same things we do. In this modern media landscape Videodrome looks less like a bleak and flawed guess at what the future might bring, and more and more like a clear-eyed warning. 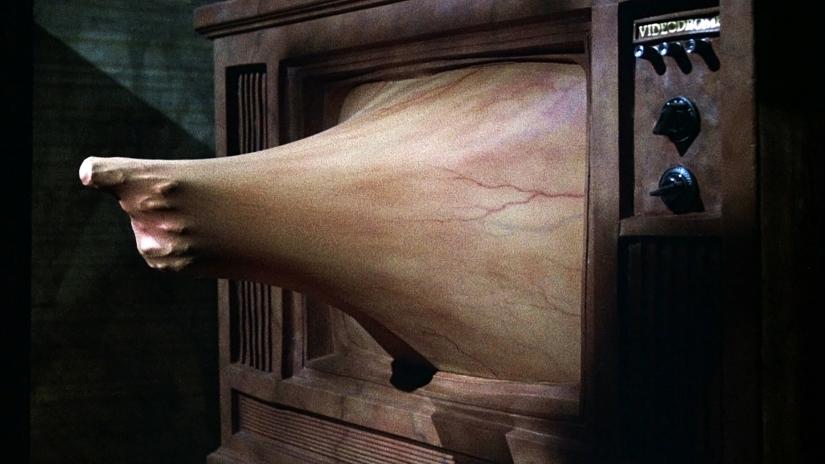 Videodrome is a deep well to draw from – I never even touched on the confluence of sex and death in the film and how Debbie Harry‘s Nicki Brand, in all her splendor, represents both! Or mentioned the VR helmet. What about you – what’s your take on the film? Am I missing some deeper themes, misreading what’s there or just picking apart a fun horror movie for the hell of it? What’s your Videodrome story?

Notes: Quotes are from the film, the documentary Forging the New Flesh, Tim Lucas’ book Videodrome, and the Den of Geek Interview with Rick Baker