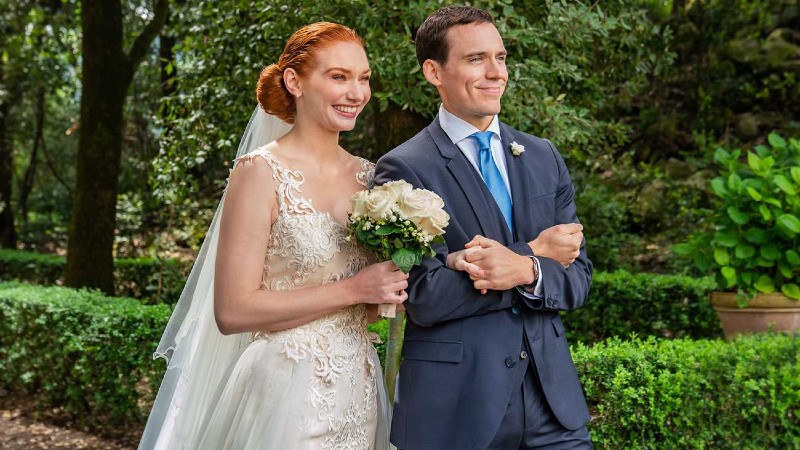 In Italy, it’s Hayley’s (Eleanor Tomlinson) wedding day. Her brother Jack (Sam Claflin) is tasked with trying to keep the event from spiraling out of control while also attempting to reconnect with Dina (Olivia Munn), a friend of Hayley’s from America. The two had met three years earlier, but circumstances had kept them from pursuing their attraction further. The major problem is the bride’s ex-boyfriend Mark (Jack Farthing) shows up, high on cocaine with the intent of winning back Hayley back. Hayley suggests Jack slip some sleeping drops into Mark’s champagne glass to knock him out until the reception is over, but thanks to a group of young children who decide to change the table place cards before the reception begins, it’s Hayley’s “maid of honor”, Bryan (Joel Fry) who gets the drugged champagne.

The wedding proves to be disastrous for all involved, but the gimmick of Love Wedding Repeat is that there are eight people sitting at the table with Jack and Mark, and alternate events unfold as each person ends up with the drugged champagne. It’s not until Jack accidentally consumes the champagne himself that things show promise of perhaps working out, not only for him, but for everyone involved.

I was expecting a sort of Groundhog Day premise with Love Wedding Repeat, but I have to admit I was relieved that this wasn’t exactly the case. Rather than Jack having to repeat the same wedding day over and over to ensure his sister’s marriage will endure – and connect with Dina once more – we simply get a montage of how each timeline would have proven to be just as horrible as the original. At least until it’s Jack’s turn to drink from the wrong champagne glass.

Sam Claflin surprised me with his fairly impressive comedic timing, given I’ve only ever really seen him in dramatic roles. I was already a fan of Joel Fry from his hilarious, supporting turn in 2019’s Yesterday, and he didn’t disappoint me here either. In fact, I would say that the most interesting parts of the movie included the supporting cast, notably Tim Key and Aisling Bea, who play friends of the bride and without a doubt had some of the best lines of the film. Unfortunately, Olivia Munn and Freida Pinto, who plays Amanda, an ex-girlfriend of Jack’s, were the most disappointing parts for me. Neither character was particularly interesting, or funny. Dina and Amanda were both cookie-cutter cutouts of rom-com women we’ve all seen before.

Love Wedding Repeat is not exactly a traditional rom-com, as it focused much more on the comedy aspect than the romance. It has a lot of raunchy humor, but not all of it works. The first five dick jokes are pretty funny, but then it teeters a bit into dick joke overkill.

You won’t be terribly invested in Jack and Dina’s potential romance either, because there’s not a lot of time spent on them together. Being told they have a connection is not the same as seeing that connection blossom on screen. It doesn’t help that Dina is a bit of a dud and Munn and Claflin are lacking the proper chemistry to make any of their scenes together remotely interesting. Jack is much more fun to watch when he’s dealing with various shenanigans with the other guests.

Ultimately I found Love Wedding Repeat to be entertaining with enough humor to keep me invested in seeing it to the end. But it’s also largely forgettable and not likely to rise in the ranks of classic wedding-based rom-coms.