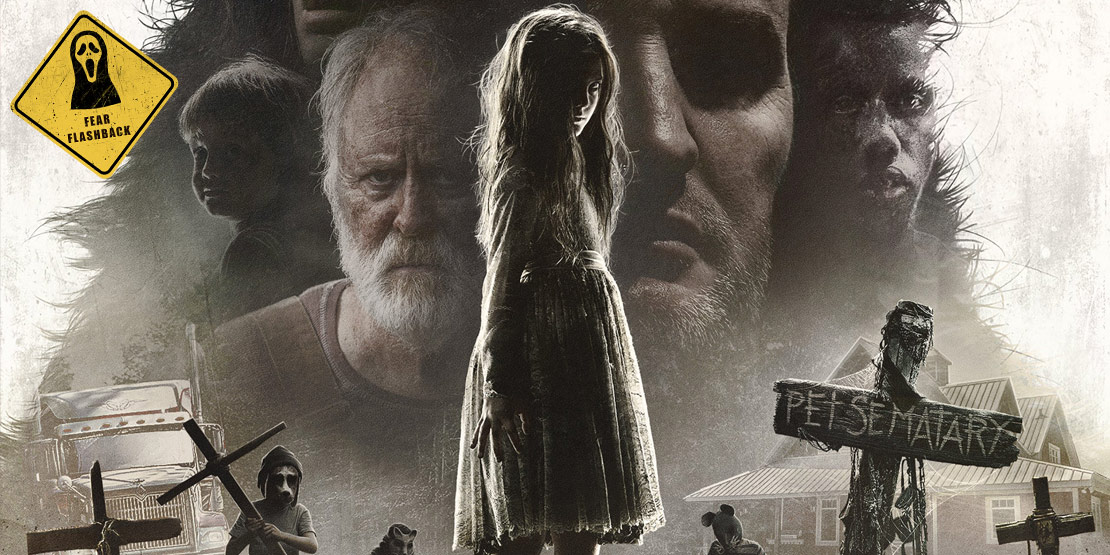 This is something of a request review. My niece, Hope, got me the Blu-ray for Christmas. It wasn’t completely out of the blue. The first horror film she ever saw in the theater was another Stephen King movie – the 2017 adaptation of IT – and she saw it with me and her mother. Her mom, my sister-in-law, is actually IN the original Pet Semetary, albeit as an extra in a blink-and-you’ll-miss-it sequence. (You can read my review of that film here.) I’ve also lent her a couple of Stephen King books over the years (though she’s not really a horror fan you can’t grow up in Maine without reading at least a couple of Uncle Stevie’s books). It was a nice gift that’s also a nod to some shared experience and I was really happy to receive it. 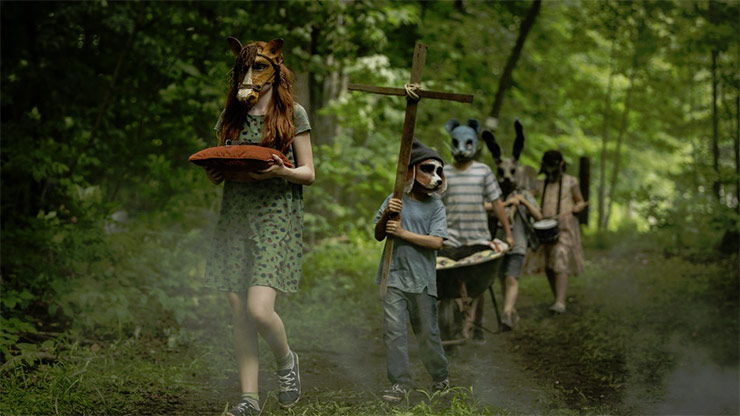 But I’ve held off watching it – in part because of other things getting in the way and in part because I’m always concerned about reviewing a film recommended by friends or family. What if I hate something they love? (Loving something they hate is less of a concern.) So it’s sat in the stack of ‘to be watched’ in the basement and every time I saw the slipcase I’d feel a tiny twinge of guilt that I hadn’t seen it yet. Not enough to do anything about it, but, you know, a twinge.

Fast forward to last weekend and Hope is home from college as her school is shut down for now. As we’re all settling in to watch a movie (the [REC] remake Quarantine) she asks me if I’ve watched Pet Sematary yet. I mumbled a handful of excuses as to why I haven’t done so yet. She nodded. Then, “I just wanted to be able to talk about it.”

And that guilt twinge became a full-on guilt cramp. She wanted to talk about a film – a HORROR film – with me. And I’d effectively blown her off. Do you know how hard it is to get a teenager to talk to you about ANYTHING, much less something that you’re interested in? Yeah, I messed up. It’ll probably be weeks before I see her again – as she needs to be elsewhere to take her now online classes – but by god when I do I’ll be ready to talk about Pet Sematary. 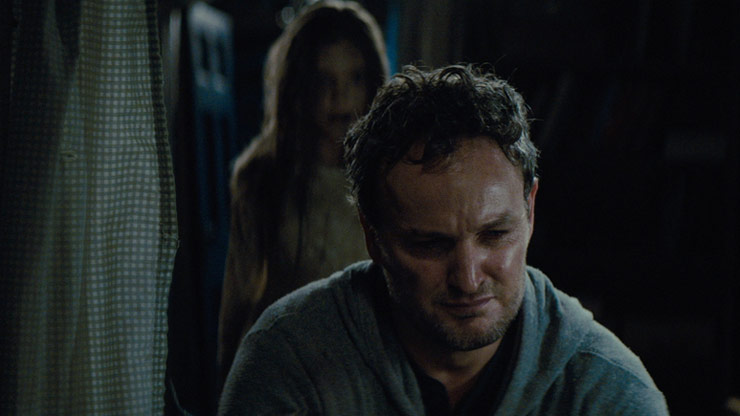 The Medium
As mentioned above, I have the Blu-ray/DVD combo release of Pet Sematary from Paramount. It looks great, and includes an alternate ending, deleted scenes and a number of behind-the-scenes extras. (And a nice re-telling of the Timmy Baterman story by John Lithgow in-character as Jud Crandall.)

The film is also available streaming for subs on Prime, Hulu and epix and can be purchased at any number of online venues. (Only available to rent from AMC on Demand, for some reason.)

The Movie
In broad strokes (and many finer details) the 2019 adaptation of the Stephen King novel is similar to the original. Dr. Louis Creed (Jason Clarke) brings his family  – wife Rachel (Amy Seimetz), daughter Ellie (Jeté Laurence), and son Gage (Hugo and Lucas Lavoie) – to rural Maine to take a job where he can spend more time with them. In the woods behind their house there is a ‘Pet Sematary’ where the local kids bury their deceased animals. When Ellie’s beloved cat, Church, is killed by one of the speeding Orinco tanker trucks their neighbor, Jud Crandall (John Lithgow), shows Louis what lies beyond the Pet Sematary – a much older burial ground, where nothing rests in peace for long. 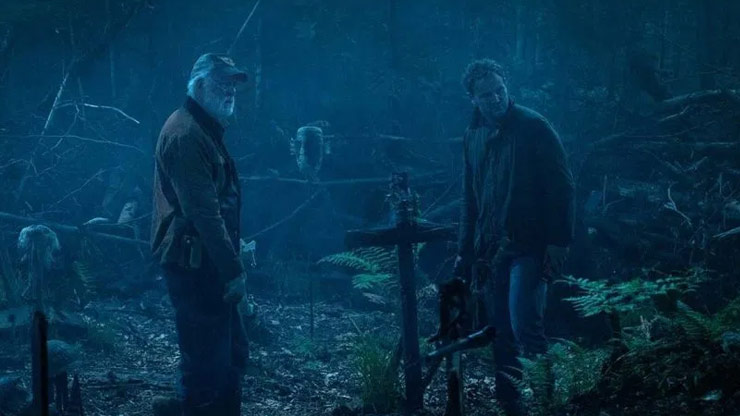 There is a lot to like in this adaptation. The cinematography is beautiful. The acting is almost uniformly better than the original film – though Fred Gwynne’s Jud overshadows Lithgow a bit, more due to the way the character is written, I think, than any fault of his. Even the cat is better – a Maine Coon cat, as in the novel. There are all kinds of nice, eerie touches – like the procession of children in animal masks that Ellie sees bringing a dead pet up to the Sematary that first day, or the way Pascow leads Jud into the woods through doorways in the house.

But… there’s something missing as well. Something vital. The characters are well acted and the horror well presented, but there’s no connection, no heart.

Pet Sematary is, at its core, a story about grief. About loss. About the way those things can take root and grow – even in the stony soil of a man’s heart – and eventually overwhelm a person, driving them to do things that some might see as insane. 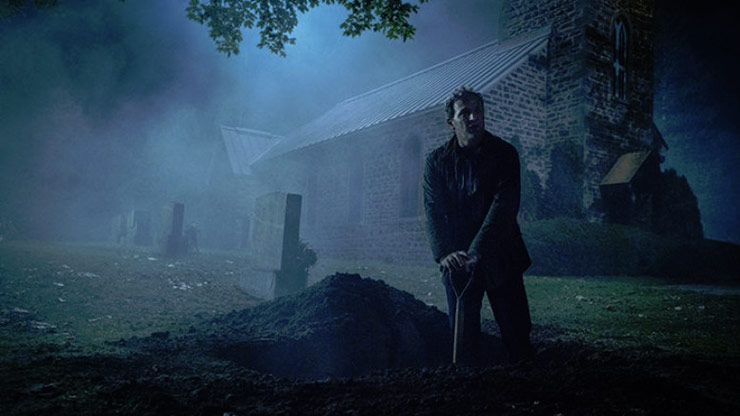 The 2019 film has all the parts it needs to tell this story well and yet it squanders them. It moves too fast – is too interested in getting us to the “good” parts of a horror film – to let us get to know the Creeds or Jud. When Rachel begins to experience flashbacks of her childhood and the horror that is her last day tending to her sister Zelda I didn’t know her yet. I didn’t care yet. And the whole film is like that – shorting us on the time it takes to invest in characters so that the horror, when it comes, has meaning. Every moment I had that I thought, “oh, this is nice, this is well done,” was over too soon. Pascow? Barely in it, and his presence felt purposeless. The deeper stories – like Jud’s dog or Timmy Baterman – that should have illustrated how badly Louis’ choices could go, were one or two lines at most. I felt hustled past those moments, rushed to the next scene only to spend precious few seconds there as well.

As clunky as the original film is – and it’s plenty clunky – I believed in those relationships. I felt like Jud would absolutely show Louis the old burial ground in order to spare him some pain. Jud’s reason in this version – that Ellie touched his heart in a way that he hasn’t felt in a long time – is both awkward and unearned. Their relationship is barely sketched in a couple of scenes and Lithgow’s gruff, taciturn Jud has almost nothing of the warm, grandfatherly aura that would make that believable. Jud is the crux on which the plot turns, and the character as written cannot bear that weight. It’s Jud’s relationship with – and indeed love for – Louis that causes all the horrible things to happen in both the novel and the 1989 film. Here, they’re little more than strangers. 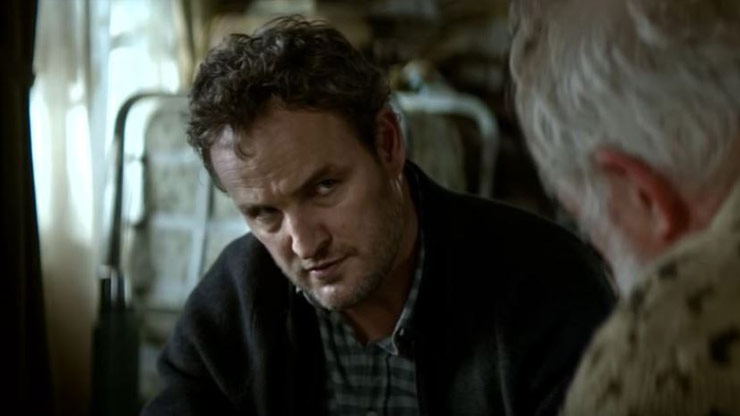 I’m harsh on the film, but there are good things. It does feel like a horror movie, there are jumps and horrific moments and Jeté Laurence as Ellie is pretty freaking fantastic. (And that twist in the plot would have been much better had they not revealed it in posters and trailers.) The set pieces – though fleeting and chaotic – are well staged and paced. If anything it’s because the details are so well handled, the acting so good, the scares so well done that I’m so disappointed. The filmmakers – Kevin Kölsch and Dennis Widmyer (Starry Eyes) – have all the tools at their disposal to make this something great. They just rush when they should take their time, and take their time (after Ellie’s return) when things should be moving quickly. 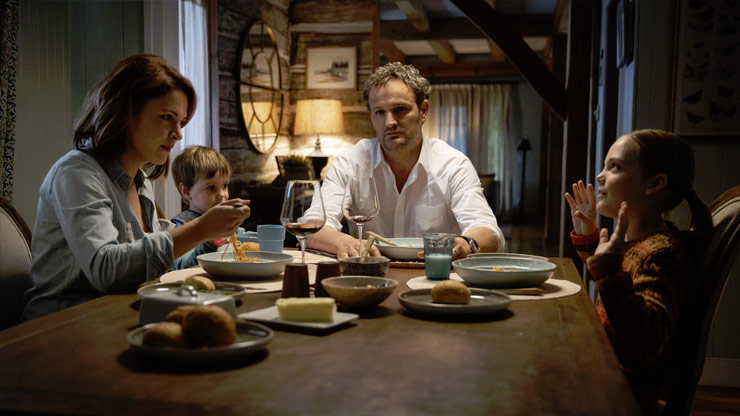 I will say that the theatrical ending is fantastic, though. Easily as horrifying in its way as the original story, if not more so. I don’t think I’ve ever been as chilled by a car door unlocking. I just wish I cared about the characters more.

The Bottom Line
Pet Sematary has a lot going for it – a great look, good performances, moments of absolute beauty and horror, but it’s all surface. It’s too much like the returned loved ones in the story, the same on the outside with no beating heart within. The novel tells a great story about love and loss and horror. I’m afraid I’m still waiting for a filmmaker to do it justice.