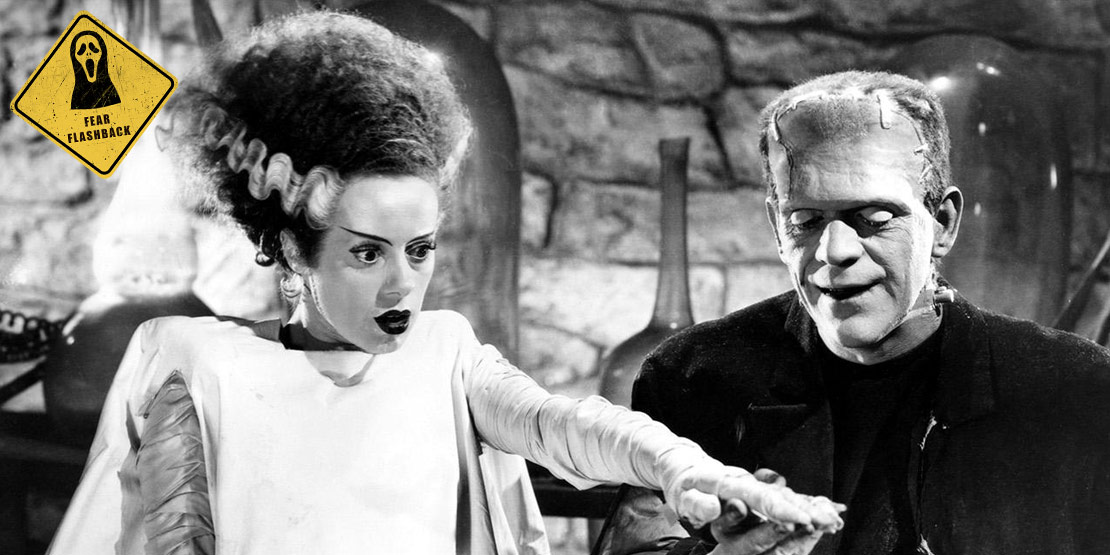 The classic Universal Monsters seem to have always been in my consciousness. I can’t think of a time when I didn’t know them – Dracula, the Wolfman, the Mummy – they were all there from my earliest memory. Part of that has to do with their ubiquity in popular culture. Even as a toddler I’d have seen versions of the monsters on my cereal boxes, teaching me numbers on TV or howling in comics and cartoons. Part of it was watching a lot of horror and sci-fi movies on the couch at my grandmother’s house – a place and time that defines me as much as anything else in my life. Those films and their sequels and offshoots seemed to be on TV a lot in those days, and in a way I felt like I grew up in their company. Now they’re all old and dear friends, ones whose appearance never fails to bring a smile. (Yeah, even you, Griffin.)

Of all those classic monsters, though, THE Monster – Frankenstein’s creation – was always my favorite. I knew his classic flat-topped brow, lidded eyes and uncomfortable-looking bolts long before I saw the original film. (I probably saw Abbot and Costello Meet Frankenstein a hundred times prior to seeing any previous Frankenstein film.) He always seemed sad, somehow, despite the scars and scowl, and I think I immediately wanted to be his friend. 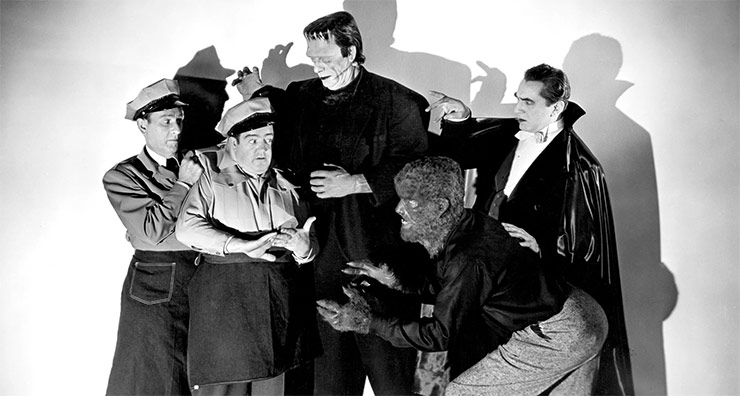 I think I saw The Bride of Frankenstein first, out of the two original James Whale/Boris Karloff films. Certainly it has always been my favorite. Though the original is a fantastic movie, Bride is simply a better film in all the ways that count (other than being first). The acting, cinematography, effects, characters, makeup, directing – it all comes together in a way that elevates the film into the upper echelon of all movies. The original Frankenstein feels like the tentative first experiment and Bride (fittingly) like the final creation of a master artist.

Bride and John Carpenter’s The Thing have always warred for the top spot in my ‘favorite horror films’ list, almost always trading spaces based on which one I’ve seen the most recently. Last year The Thing was the very first film I reviewed for ScreenAge Wasteland and it’s sat in the top spot since then. Now, however, Bride reclaims that spot – it’s just so damned good.

The Medium
My wife gave me the Universal Monsters Essential Collection on Blu-ray a few years back, and I treasure it. Maybe someday I’ll trade up to the Complete Collection, but for now I’m more than happy with the 9 films in this box set. They look and sound fantastic and this is my preferred way to watch Bride.

For streaming options, you can rent or purchase The Bride of Frankenstein on any number of platforms, but there’s currently no service which includes it as part of the subscription.

The Movie
The success of Frankenstein in 1931 guaranteed a sequel, but it would be another three years before Universal was able to convince James Whale to return. The screenplay would go through several iterations before James Balderston (who had adapted the original Frankenstein) would bring in the concept of the Bride (from the original novel) and the opening scene with Mary Shelley, which were retained through a number of other revisions. 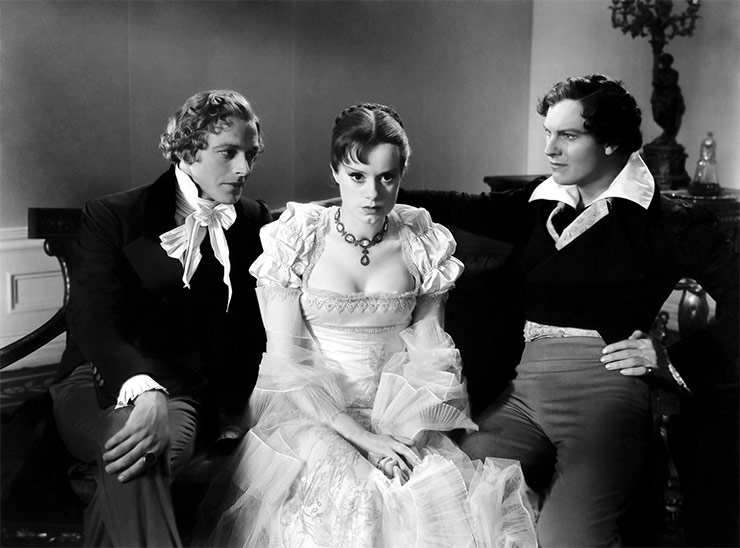 The Bride of Frankenstein follows directly on from the ending of  the original film. At the burning remains of the windmill Henry Frankenstein (Colin Clive, reprising his role), appearing lifeless, is brought back to the castle and his waiting fiancee’. The Burgomaster shoos everyone away, except the couple that lost their daughter to drowning at the hands of the Monster. Hans needs to see the burning corpse, to know the Monster is dead.

This does not end well for Hans.

I’d forgotten just how violent this movie is. The Monster kills people right and left. And not just ‘poor misunderstood monster threatened by villagers with torches tries to get free, crushing people as he goes’ kind of killings. Hell, he deliberately pursues Karl (Dwight Frye) to the pinnacle of the castle and tosses him off. I mean, Karl’s not a nice guy – he murders a girl for her heart – but as far as I can tell the Monster kills him because he just doesn’t like his face. (To be fair, Frye also played Fritz, the hunchbacked assistant who torments the Monster, in the first film. I like to think it’s a nod to their ‘resemblance’ on the part of Whale, having a little fun.) 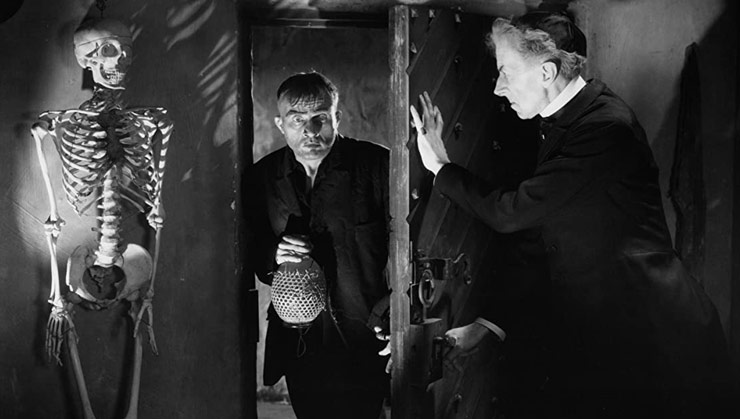 The Monster has survived and, after casually murdering the couple, staggers off into the woods. (Jack Pierce does another fantastic job with the makeup – giving the monster burn scars and hair obviously burnt short. He even modifies the makeup as the film progresses to give the impression of the Monster healing over time.) Victor has also survived and, seemingly, has learned his lesson about playing with forces man is not meant to know. He renounces his work and plans his wedding with Elizabeth (played this time by Valerie Hobson).

His freedom and happiness is short-lived, however – the arrival of an old professor, Doctor Septimus Pretorius (Ernest Thesiger) will once again pull him into a world of mad science, populated by miniature homunculi, artificial brains, and dark plans to give the Monster a mate…

The cast is uniformly excellent, but Dr. Pretorius is by far my favorite character and Thesiger my favorite actor. His overwrought, campy, deliciously evil performance creates one of the best screen villains of all time. Every line said with a sneer, every dramatically lit close-up a study in barely repressed evil glee. 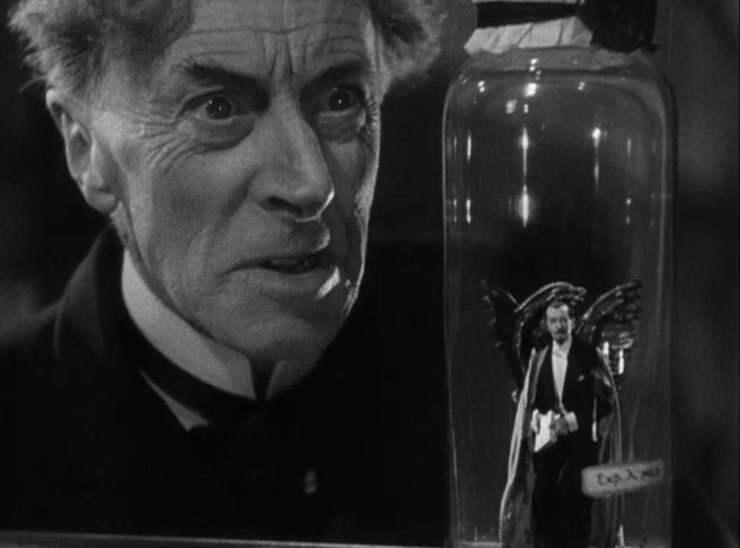 Colin Clive as Victor Frankenstein is overwrought, sweaty, on-the-edge all the time. He’s perfect as a man barely in control, always just about to go into a nervous breakdown and yet driven by an inner madness.

And Karloff, of course, is just amazing. His Monster is full of rage and pathos, violence and a desire for peace. He’s constantly looking for friendship and his rage is just a reaction to the fear and rejection he finds in everyone around him. The scenes with the blind hermit are some of my favorites. I’m a bit torn about the decision to have the Monster talk in Bride – I always thought he was more expressive without the words – but then again we get that fantastic scene in the crypt with Dr. Pretorius where he says “I… Love. Dead. Hate. Living.” That’s pretty damn creepy. 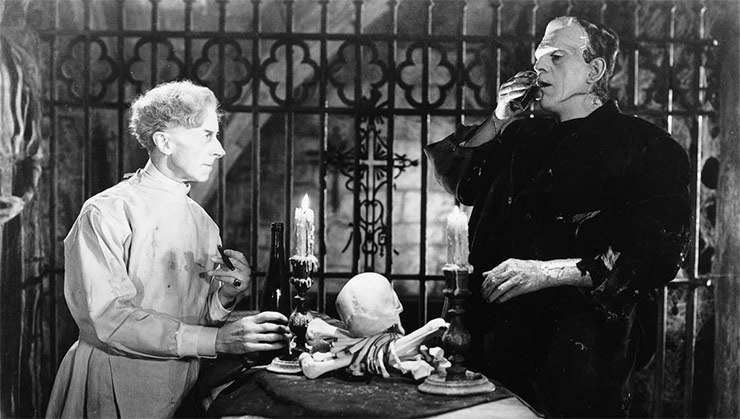 There are a lot of echoes from the first film, but one thing that struck me this time was during the scene when the monster arrives with Pretorius to force Henry to create the Bride. Henry makes to leave and the monster gestures sharply with his hands “Sit. Down.” And Henry does. It’s a direct reference to an early scene in the first film where Henry is demonstrating his control over the monster. The meaning is clear – the monster is the one in control now.

Elsa Lanchester is fine as Mary Shelley in the opening, but incredible as the Bride – managing to keep the focus on her while sharing the screen with Thesiger and Karloff (the hairdo helps of course). Her bird-like movements help heighten the awareness that there isn’t even a human brain in there – it’s an artificial one, grown by Dr. Pretorius. For some reason my favorite moment of hers is when the Bride first sees the Monster – she starts to scream and sort of chokes on it, as if her body knows how to react to terror but the brain just short-circuits. (She figures it out eventually.) That hiss just before the Monster throws the switch, destroying the lab – chilling, even now. 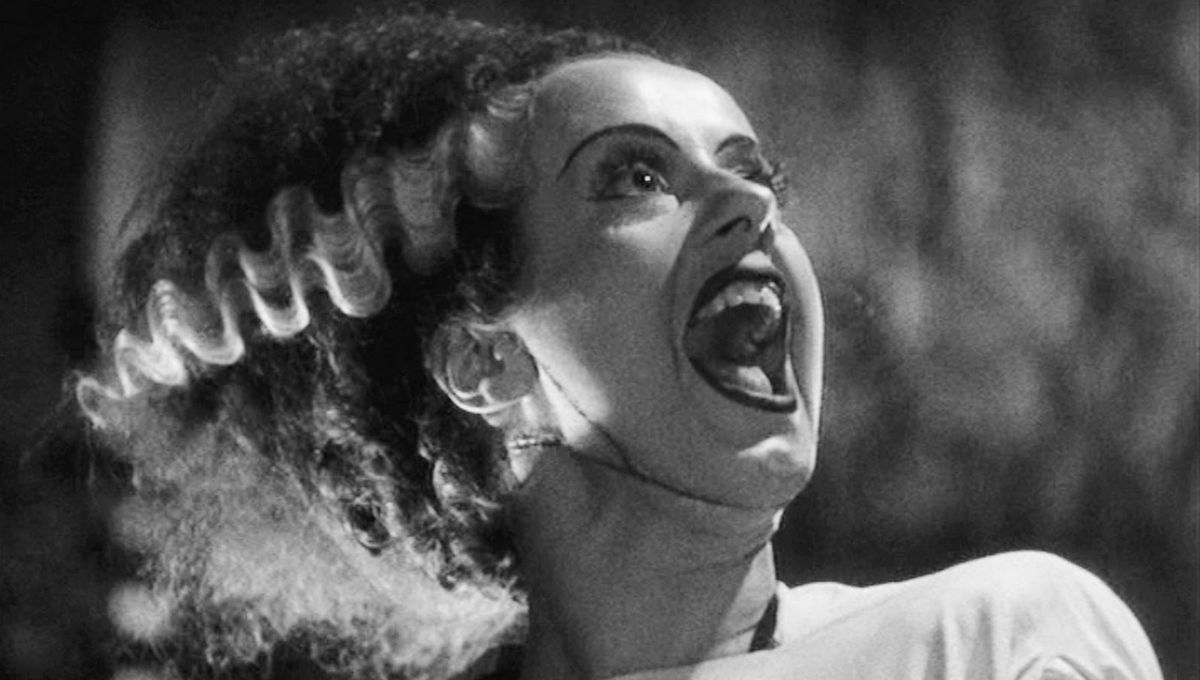 The epic final sequences, when the Bride is brought to life, are some of the most fantastic sequences in cinema – the lighting, effects, music, cinematography, editing, acting – it’s all brought together in a nightmarish phantasmagoria of science and madness.

The Bottom Line
The Bride of Frankenstein is one of – if not THE – greatest sequels of all time. A grand combination of technical skill, acting, story, characters and presentation. It’s a gloriously over-the-top thrill ride, with humor, pathos and horror. It’s one of my favorite films. Hell it IS my favorite film. At least for today!