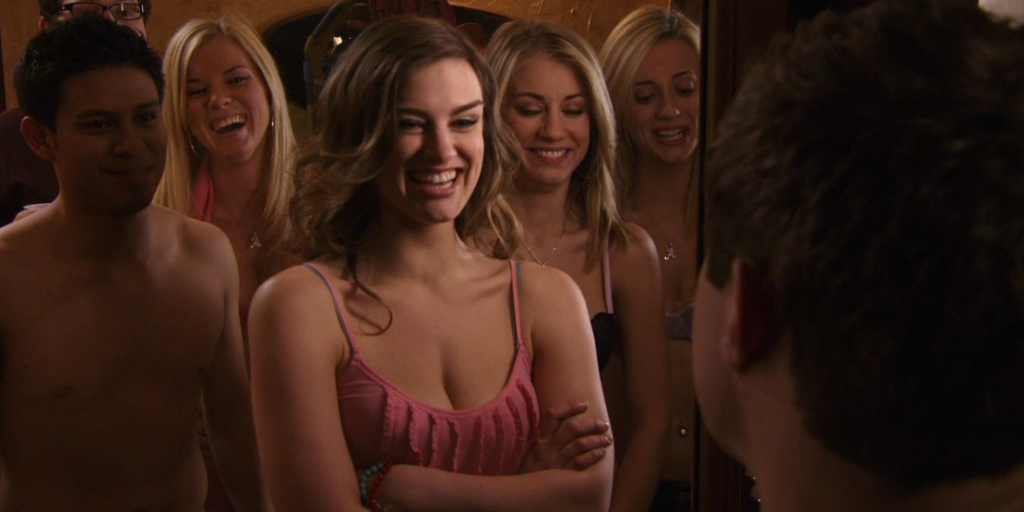 This post is the final installment in a series on the American Pie spin-offs. Previous installments include Sex as Spectacle, Sex as Validation, and Sexual Sirens.

In 2009, the American Pie Presents released its final direct-to-DVD film to date, American Pie: The Book of Love. It was seen as a return to the series. However, while the film returned to the roots of the original series, it did incorporate new elements into the American Pie narrative. This led to a film with a very split personality.

Between the release of American Wedding in 2003 and 2009, two big events happened.

The First was the release of Superbad (2007). Unlike the American Pie series, Superbad’s narrative focused less on the sexual hijinks of the lead characters, and more on their friendship. At the end of the film, almost nobody gets laid, but everybody comes away with a better understanding of who they are.

The other was the creation of social media sites, specifically Youtube. Since its launch in 2006, it had launched the careers of many people. This included Brandon Hardesty, one of the film’s stars.

The Book of Love

After Rob (Bug Hall) accidentally ruins the famed Book of Love in a fire, he contacts Levy’s Noah Levenstein to help him and his friends Marshall “Lube” Lubetsky and Nathan Jenkyll (Brandon Hardesty and Kevin M. Horton).

The World of The Film

With the internet and video sites, actors began to come from different places than they had before. One of Book’s stars, Brandon Hardesty, got his start acting out movie scenes on Youtube. Hardesty would later go on to become the writer and narrator of the No Small Parts (2014- ) video series, in which he covers the careers of various actors. As Lube, Hardesty seems to be playing a character similar to Seth (Jonah Hill) character in Superbad (2007). Like Seth, Lube has many fantasies. However, while Seth fantasized about absurd ways to get alcohol out of a store, Lube’s fantasies primarily serve to sexualize women.

On the other side, this film features lots of famous faces in supporting roles. Eighties leading lady Rosanna Arquette takes over the Eugene Levy role of awkward parent trying to teach their kid about sex. The cameos include Sherman Hemsley, C. Thomas Howell, Tim Matheson, Steve Railsback, and Dustin Diamond. Kevin Federline also appears as a Canadian border Guard.

Style of the Film

The film’s style seems to be go for broke. The acting is large and cartoonish. The dialogue utilizes the most anatomical and graphic terms. Characters speak lines such as “I’ve never had a penis in my vagina” and “your cock is on the clock.” Dialogue also often plays over music with lyrics, making it harder to choose what to listen to. Cameos appear everywhere. The parties glorify the excessive partying lifestyle. Unlike the terrible prom in the first American Pie, the dance in this film looks like it is supposed to be fun.

The American Pie mythos also exists mostly in the background of this movie. The actual Book of Love provides a lot of set-ups, but seems largely unnecessary to the many plots. Eugene Levy’s Noah Levenstein shows up for one sequence where he helps re-construct the book of love, but remains largely absent from the movie.

The Stifler character in the movie, Scott Stifler (John Patrick Jordan), acts as the most prominent element that connects the new characters to the original series. The movie portrays him as an athletic jerk who always gets laid over the protagonists.

Director John Putch began his career as an actor before becoming a director. He most famously played Sean Brody in Jaws 3-D (1983). After a while, he transitioned into making feature films. As a director, Putch has mostly worked in television and independent film.

Book of Love writer David H. Steinberg has a long history with the American Pie series. He co-wrote American Pie 2 (2001) as his first credited writing credit. The spec script that got him noticed in the business eventually became Slackers (2002). That film got unfavorably compared to American Pie by multiple critics.

As a writer, Steinberg loves dialogue. As a director, Steinberg also directed the romantic comedy Miss Dial (2013), which focused around a series of telephone calls.

Women in The Book of Love

Women in The Book of Love tend to have two speeds: guilt and validation. Either the female characters insult and criticize the male protagonists for the way they treated them or they validate their emotions. Rather than clump them all into a group, it would be easier to go through the main characters individually.

The main relationship between Rob and Heidi (Beth Behrs) revolves around Heidi’s quest to lose her virginity. She validates the hero the most. She and Rob feel attracted to each other. However, Rob’s need to get laid makes her uncomfortable and she decides to get more sexual experience from Stifler. This ultimately backfires, leading Rob to try and hook up with a girl at a party. They only later reconcile on Gondola Ride up to the top of a mountain.

Nathan’s devout Christian girlfriend Dana (Melanie Papalia) has decided to take a vow of celibacy. Although Ashley is planning to remain celibate, she has previously had sex with six guys. Nathan counts it as seven because she had sex with a black guy.

Nathan thinks that this is stupid and the film agrees with him. Things come to a head when Nathan interrupts Dana’s church service. Dana and Nathan go to the back of the church to talk, but accidentally switch on the intercom. Their argument reveals the sex life of both Dana and her mother to the entire church.  The only baring it has on the plot is that it makes Dana’s father keep Nathan away from his daughter.

Like Heidi, the film has her character arc happen off screen. She tells Nathan she has been “doing some thinking” and feels that the pledge is harming their relationship. They decide to engage in various sex acts, including having sex on the Gondola ride.

Meanwhile, Lube is interested in Ashley Lawrence (Jennifer Holland), a popular cheerleader who likes Lube as a friend, but dislikes his advances.

Ashley seems off based on the character shifts. Most of the film, she appears as a background character or as one of Lube’s fantasies. These fantasies include her making out with two of her friends and Lube photographing her in a bikini.

When Rob tries to use some of the Book of Love’s magic on Ashley, it backfires. He tries to work his moves on her in a lingerie shop. She gets wise to him, takes him back to the dressing room and shows him her breasts. She then stuffs some lingerie into the front of his pants and makes him shoplift it for her. He gets caught, but buys it for her. After all of this, Stifler comes by and says “, I’m horny. You want to suck me off in the sharper image?” She agrees and they go off to do that.

When Lube makes a speech to Ashley at a party, she nicely rejects him and moves on. Later on, Lube approaches her on a Gondola ride. When the Gondola stops on a hill, he talks to her about his feelings again. She gets mad and tells him that he just sees her a trophy. She finally agrees to sleep with him after he makes another speech to her after proving his love for her.

Katie (Adrienne Carter) is a girl Stifler bedded, then ditched. Throughout the movie, she’s trying to talk to him.

Katie goes to a party at a cabin in the mountains, she enters into a card game with him. If she wins, he will apologize to her and run naked through the snow. She does, and Stifler runs around outside. There he meets a CGI moose, who corners and anally rapes him (he refers to having “a moose pickle up his butt”), thus punishing his devious ways in an unexpected manner. It’s a joke and narrative similar to an 1980’s comedy like Trading Places (1983) or Top Secret! (1984). In both films, a primary villain is taken advantage of by a large animal.

Throughout the film, Stifler tries to hit on her with various dirty phrases, but she always has a quick retort for him. However, when Stifler, is laid up injured after getting raped by a moose, he offers his friendship to her. She sits down next to him on a couch. He puts his arm around her and touches her breast. She chastises him and he takes his hand away.

In The Book of Love, women tend to both punish men’s terrible sexual behavior and reward male sexual pursuit.

With The Book of Love, the American Pie Presents series came to an end. Perhaps the world had just moved on from this sort of teen comedy.

Three years later, Universal released the final installment of the regular series, American Reunion (2012). Unlike the previous installments, Reunion focuses on the thirty something protagonists were now so much different than the teenagers they once were. This movie seemed to take inspiration from another hit comedy: The Hangover (2009). Like that film, Reunion has a whole bunch of scenes where a disillusioned 30 something man wakes up in a crazy situation after a night of heavy drinking. Like The Book of Love, it was both of a return to the old series and a chance to try something new.