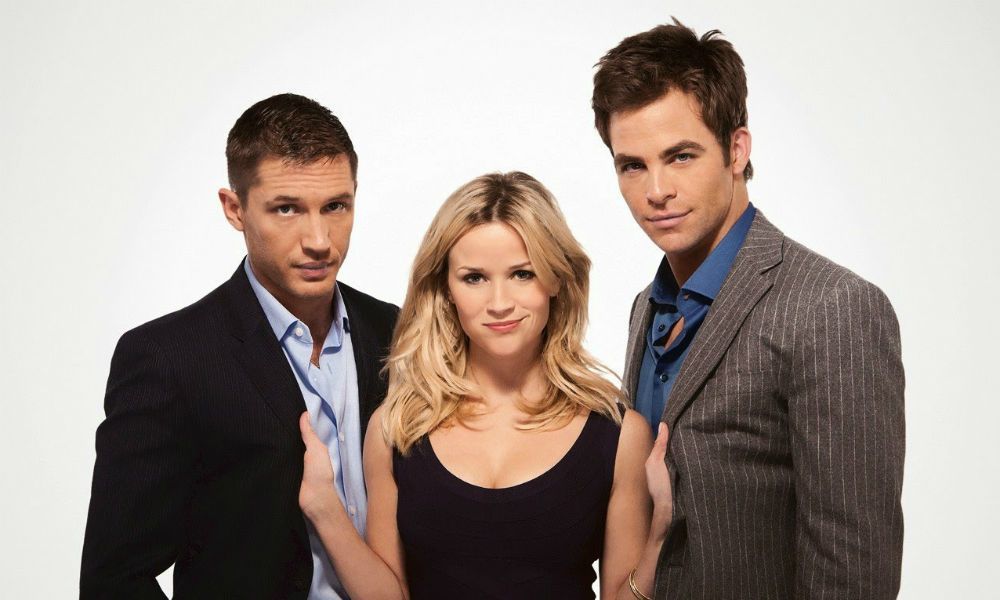 After a botched mission in Hong Kong, two CIA operatives, FDR and Tuck, are grounded to desk work for their own safety. This seems to indicate that they have plenty of downtime now, because after they learn they’re both dating the same woman, they turn their learned tactical skills into weapons against each other in a fight to win her heart while using a lot of CIA resources in the process.

I can see why This Means War was labeled an action romance, but it’s really not. There is a bit of action at the beginning of the film, and at the end, with a sprinkle of something resembling a plot in the middle, but that’s about it. The rest of This Means War is a true blue rom-com, but mostly focused on two men playing an array of silly pranks against each other. And frankly, that’s the best part of this movie.

Don’t get me wrong, Reese Witherspoon is really cute in this movie, but there’s not much to her character Lauren. Lauren tests consumer products. She’s gorgeous, funny and sweet. She’s also, of course, super-duper single and has a really hard time in the romance department, something she’s keenly aware of when she discovers her ex-boyfriend is engaged. She’s also predictably upset when her best friend Trish (a very funny Chelsea Handler) posts her picture on a dating website. Still, Lauren decides to give it a chance when she sees Tuck’s picture on the same dating site, and Tuck just so happens to be played by Tom Hardy, so yeah, I would be clicking on that profile too if I were her.

Tuck and Lauren hit it off, but then Lauren runs into FDR (Chris Pine) nearby at a video store. They do not hit it off at all, but FDR is intrigued by Lauren’s not so nice attitude, and he actually hacks into the video store database to find her information. He shows up at her job and basically strong-arms her into agreeing to a date. It’s a bit weird and a bit aggressive, but it’s Chris Pine, so… I guess it’s okay.

Anyway. Both guys started dating Lauren, who seems to like them both equally. She spends most of the movie feeling guilty about dating two men at once, while Trish encourages it. It doesn’t take FDR and Tuck very long to learn they’re both dating Lauren, and while they settle on a gentleman’s agreement to not sleep with her, and to back off if it begins to affect their friendship, it very quickly begins to affect their friendship.

They begin to sabotage each other’s dates and they plant surveillance all over Lauren’s home to find out more about her to use that to their advantage. The scenes where they very purposely railroad the dates were my favorite part. FDR and Tuck’s descent into frenemies, along with Handler’s turn as Trish, provided the movie’s laughs. The other scenes, where they break into her home to plant cameras and bugs everywhere and then pretend to like things they don’t in order to manipulate Lauren’s feelings… it’s just insanely creepy. Basically, the entire movie is one big pissing contest between FDR and Tuck. So their mutual confessions of actually falling for Lauren rang false to me.

I don’t have much to say about the side plot about some Russian(?) villain attempting to get revenge on FDR and Tuck for accidentally killing his brother, because it has no bearing on the film at all other than who Lauren will run to in the end to be protected from him, and in doing so, reveals who her heart belongs to. There are some explosions though!

And it’s true. Hardy and Pine are both charming in their own ways, and they have some incredibly fun chemistry together. Their bromance is the best part of the entire movie. I would watch it solely to see these two together again, despite how silly it all is. I sort of wished they realized they were sabotaging each other with Lauren because they were really secretly in love. There’s a scene where Tuck is out on a date with Lauren and FDR calls him continuously, wanting Tuck to come over and watch a CHiPs marathon with him. The scene is played like FDR is getting stood up by a date… Tuck was so that date.