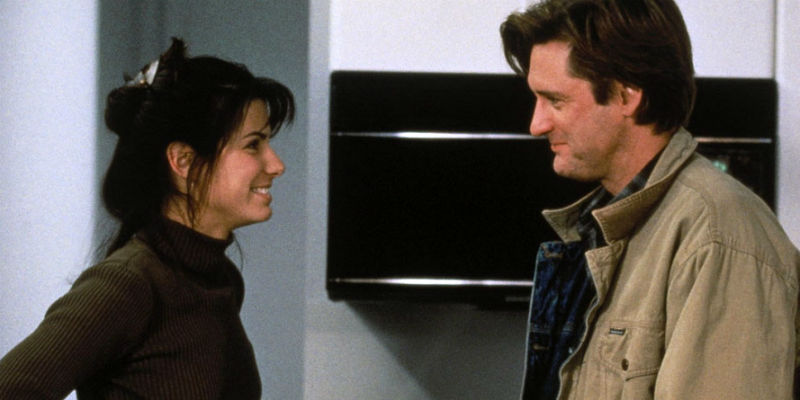 After Lucy (Sandra Bullock), a lonely transit worker, saves her longtime crush Peter (Peter Gallagher) from the path of an oncoming train, she finds herself unexpectedly in the role of his fiance due to a misunderstanding at the hospital. With Peter in a coma, his family embraces Lucy as one of their own after she finds she can’t tell them the truth. Complications arise when she meets Jack (Bill Pullman), Peter’s brother, and finds herself falling for him.

While You Were Sleeping has been one of my favorite romantic comedies since it was released in theaters in 1995. Sandra Bullock slipped seamlessly into the role of Lucy, a role that was first offered to Julia Roberts, and the film catapulted her to stardom. While the premise itself was a bit improbable, the superb, engaging cast and Jon Turteltaub’s smooth direction manages to make it work.

Lucy is not your typical rom-com beauty queen (nor does she have to undergo some magical transformation from drab to fab in order to win her man) and she never has to change who she is in order for Jack, or Peter for that matter, to fall in love with her. She’s awkward, kind and relatable on every level, while Jack and Peter could not be more different. Peter being a wealthy, self-absorbed attorney and Jack a blue-collar boy next door who likes to build furniture. You can see virtues in both characters, and how Lucy would find herself attracted to both.

The entire Gallagher clan, along with long-time neighbor and Peter’s godfather Saul (Jack Warden), is so much fun to watch. They play off of one another like true family, bringing a subtle sense of light-hearted dysfunction to the movie that so many of us can relate to. It becomes obvious to us why Lucy falls in love with them just as she does with Jack. They’re the family she’s always yearned for, after spending so many holidays alone. When she meets them, the desire not to disappoint or hurt them is almost immediate for Lucy, and it continues throughout the movie, forcing Lucy to dig herself deeper much to her exasperation and our amusement.

Despite being released in 1995, While You Were Sleeping is still a feel-good, winsome romantic comedy with incredibly charming performances by Bullock and Pullman. Jack and Lucy’s chemistry is really the glue that holds this entire movie together. There aren’t many rom-com tropes to be found in this movie, which is a really nice change of pace. While Peter is a bit arrogant and what Saul calls, a putz, he’s not the jerk who treats Lucy badly and pushes her into the arms of the man she’s supposed to be with. Peter may be a putz, but he still loves his family, and there is heart beneath the obliviousness.

Even better, Jack and Lucy are not bitter enemies fighting attraction. They’re not forced together in contrived situations. Their interactions are natural despite the unusual circumstances and even once you realize they’ve fallen in love over the course of what is essentially a week, you still believe it.