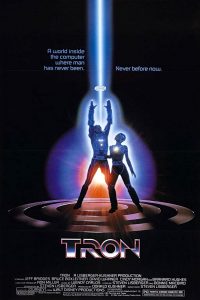 When talented computer engineer Kevin Flynn (Jeff Bridges) finds out that Ed Dillinger (David Warner), an executive at his company, has been stealing his work, he tries to hack into the system. However, Flynn is transported into the digital world, where he has to face off against Dillinger’s computerized likeness, Sark, and the imposing Master Control Program. Aided by Tron (Bruce Boxleitner) and Yori (Cindy Morgan), Flynn becomes a freedom fighter for the oppressed programs of the grid.

Sailor: Before we even attempt to try and dissect this horribly confusing mess of a film, how familiar with this franchise were you? Did you see this as a kid? Did you play the arcade or sequel game that came out years later? Did you see reboot movie that came out a couple years ago and did you watch the cartoon based on the reboot?

Kane: That’s a whole lot of no. No, I hadn’t seen the original. No, I didn’t play the game and no, I didn’t watch the cartoon. I did, however, see the reboot but I don’t remember anything about it.

Sailor: Saying Reboot reminds me of the cartoon Reboot. Did you see that?

Kane: I just said no! I don’t watch nothing Tron.

Sailor: The name of the show is Reboot, ya big dumb dummy. It’s kinda like Toy Story in that it explores what our playthings do when we’re not playing with them. It shows what video game characters are up to when we’re not playing their game. It’s really great, I just don’t recommend it to newcomers because I already know those graphics are as hard on the eyes as a sandpaper condom is on a dick.

Sailor: Now onto this fucking mess. I will pay you a million dollars if you can explain the rules of the universe and also tell me the plot of the film. How does the computer shit work and what is the main character’s goal? What is he trying to achieve?

Kane: If I answer the second part, do I get half the money?

Sailor: That’s what he does, yes but why does he do that?

Kane: Because he’s a bad guy. He did the bad things. He killed the fat guy!

Sailor: At no point, did I ever understand what anyone was doing, why they were doing it or how any of it worked.

Kane: We usually discuss our favorite scenes when we do these things but me trying to piece together this puzzle was my favorite part.

Sailor: I was partial to the frisbees myself but I agree.

Sailor: I’m still not 100% sure if they were in the game Flynn created or completely different computer system, what the laser that zaps Flynn into the computer/game was made for, what the bad guy wanted, how the code within the computer/game know what users are or how they have personality or why they’re all forced to play games. The only thing I know for certain is that Flynn did all this to get a piece of paper that said he invited a game.

Kane: Which he easily could’ve typed himself.

Sailor: I don’t think I’ve ever seen a film with lower stakes. Wait. I take that back. I think all the main characters want in Valerian and the City of a Thousand Planets is to go on vacation. I think.

Kane: I wouldn’t know because I skipped that shit.

Sailor: It looked pretty. That’s about all I can say about it.

Sailor: Speaking of, do you think audiences at the time thought this looked good?

Kane: Eh, maybe? I know it was sold as the first film made with CGI but I can’t imagine anyone falling for that lie. It’s obviously rotoscoped and cardboard sets.

Sailor: It looks so bad but in a charming way.

Kane: I didn’t hate the visuals.

Sailor: Do you think there was ever a time where this was considered action-packed? Like was this a thrilling spectacle to anyone?

Kane: I’d have to imagine that someone thought this was exciting.

Sailor: I only mention this because we’ve left out a very crucial element of this film. As important as the special effects and indecipherable plot. The boredom. This movie moves incredibly slowly.

Kane: It does but it isn’t as boring as I thought it would be. I was definitely bored throughout but I never wanted to kill myself, so there’s that.

Sailor: Once Flynn is in the computer, it’s basically a chase film. Three characters just run from one place to another. Where they’re going, I have no idea.

Kane: It’s basically Mad Max: Fury Road. They’re always on the move and Tron, much like Furiosa, is the true hero of the film. The lead is almost irrelevant.

Sailor: Now I want a Fury Road type film set in a computer. Where bytes and ROMs are all feral and an outdated computer is like the wasteland.

Kane: That feels like something Charles Band would’ve made in the mid-90s.

Sailor: And that I definitely would’ve watched.

Kane: I’ll say this: it definitely would’ve been easier to follow but it would’ve looked even worse if that’s possible.

Sailor: I honestly have nothing more to add. Casting? 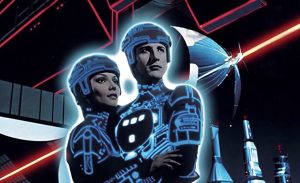 Sailor: The first two that immediately popped into my head for Flynn, were Dev Patel and Donald Glover. I don’t know why.

Kane: the actor needs to be a believable hacker and nerd.

Sailor: The cat from Strange Wilderness.

Sailor: He’s gotta look like a nerd in the real world but a badass in the game.

Kane: The older one.

Sailor: James Marsden? I can see that.

Sailor: Wait, How old is he? Because he feels way older than Long

Sailor: I like both of these actors but they’re a tad too old, I think.

Kane: Scratch that. He’s too good for this.

Sailor: I have a suggestion but I don’t think you know who he is.

Sailor: He was in Hush, 10 Cloverfield Lane and Short Term 12.

Kane: I know him and I can see that.

Kane: Wait, for Flynn or Tron?

Sailor: How about Yahya Abdul-Mateen II for Tron?

Kane: Yeah, I can see that.

Sailor: Any actress with a face. Literally, any actress could do this role. A mannequin with charisma could do it.

Kane: She was the first actress that popped up on Google.

Sailor: I don’t want someone British.

Sailor: Nevermind. He’s too good for this.

Sailor: He was in the reboot.

Kane: No shit. I remember nothing about it.

Sailor: Yes. I love that guy and he needs more work.

Sailor: The guy who did Sky Captain and the World of Tomorrow?

Kane: I don’t think it’s a classic but it wasn’t as bad as I thought it would be. I just wish I understood anything that happened in it.

Sailor: I don’t think the movie itself is good but the universe has potential. I really liked the sequel and I liked the game that came out in the early ’00s. So it’s not the universe I have a problem with, it’s the rules. You flesh them out and you have the makings of a great franchise.

Did you play any of the games?

Not that I can recall.

Would you be interested in seeing this turn into a Netflix show?

Not at all. I’m watching Tron Uprising rn though.

Is that the cartoon?

Yea. I just put it on because I’m not paying attention and need background noise.

The animation reminds me of Aeon Flux.

My mind is saying Jessica Rabbit. But I think it was the girl mouse in Chip n Dale: Rescue Rangers.

Why do you have to make everything weird?

She was cute. And you wanna bang a cartoon. So don’t even.

A human cartoon. Not a cartoon mouse!

But are you banging the mouse as you or as another cartoon mouse?

My human penis would obviously destroy her. So I would be her size. Now, would I also be a mouse?. That’s a good question

It would be weirder if she was a human!

No, it’s not! Basically, you’re saying if you saw a cute enough mouse you would bang her with your tiny penis!

But if they did?!

Am I still a human-size human?

You are you. The one wanting to have relations with a mouse.

But is she dtf? That’s the question.

When is a cartoon mouse not dtf?

Then we are in trouble.

What is your impression of Tron? Did you like it and who would you cast in a remake? Comment down below and let us know.