For my last “favorite” film this month (continuing our 1 year anniversary celebration) I chose Evil Dead II. I’ve already written about a ton of my favorites over the last year (like The Thing, Videodrome and Shock Waves – yes, Shock Waves), and once you get past your top five or so films there start being a lot of movies that clamor for your attention. That being said the first two Evil Dead films are almost always in the running for my top 10, and given I reviewed the first Evil Dead almost exactly a year ago it seemed fitting to finish up with the sequel – which also happens to be a film I’ve probably seen more than any other.

I did not see Evil Dead 2 (Dead by Dawn!) when it first came out. I’m not sure what my damage was, but I found myself avoiding it. I loved the first film – it was the first video I ever rented – and I think I was already wary of sequels. For whatever reason I didn’t see it for quite a while and when I finally got around to it I remember asking my brother Scott – fellow horror movie fan – if he thought it was any good. He responded “it’ll turn your hair white.”

My brother, ladies and gentleman. His sense of humor is about the same, even now. 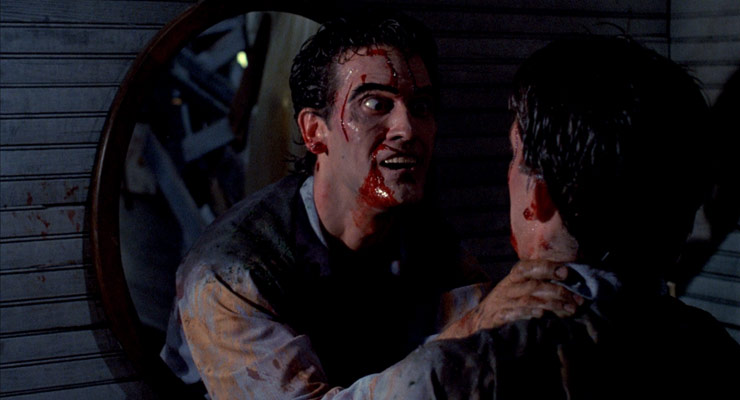 I took him seriously, expecting another “ultimate experience in grueling terror.” What I got was… not that. Not even remotely that. Instead of horror Raimi and co. had tilted everything more towards humor, leaning heavily into “spatstick,” creating a Three Stooges inspired whirlwind of gory laughs and finally revealing Bruce Campbell as a gifted, charismatic physical comedian. I watched it twice that night. I may have watched it again the next day.

Despite my expectations being thwarted – usually a recipe for me panning a film for years – I loved it. It was still gory as hell (the blood fountains, the possessed hand, Linda’s head being chainsawed), but it was now just as funny as it was bloody. Bruce Campbell transformed from the weenie, weedy nebbish of the first film into the epic Chin, from Ashley Williams to just Ash, chainsaw-handed kicker of deadite ass and master of cheesy one-liners. The swirling camera, outstanding sound design and mostly-okay miniatures work were icing on top of a fantastic, flying-eyeball cake. And that ending! I wanted that sequel immediately. It elevated Bruce Campbell to superstar status… in my mind, anyway. (One of my prized possessions is a copy of If Chins Could Kill signed by Bruce. It reads ‘To Bob. I didn’t know you could read, ya bastard!’)

In the years since I’ve purchased the film a number of times and watched it… maybe a hundred times, more or less? To be honest, most of those were probably during get togethers where it ran in the background, but it’s always been a film that I can watch any time and anywhere and it just never gets old for me. Half the time I’ve watched it with the commentary track from Raimi, Campbell, co-writer Scott Spiegel and makeup effects artist Greg Nicotero. It’s one of my favorite commentary tracks and is mostly goofy fun with some behind the scenes info as well. Evil Dead II is a very quotable film – “Groovy,” “Work shed,” and “I’ll swallow your soul!” for instance – but my friends and I quote the commentary track almost as much. “Everything’s okay now,” in particular – even my wife uses that one. 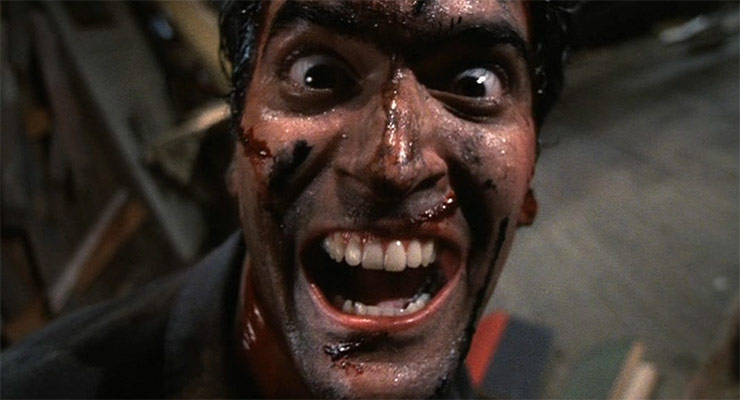 In fact, I don’t remember the last time I just watched the film itself, without the commentary track. Time to remedy that!

The Medium
Though I have a rubber “Book of the Dead” version of Evil Dead II from Anchor Bay I prefer the 25th Anniversary Blu-ray released by Lionsgate in 2011. It’s got a decent transfer, a handful of extras (including that all-important commentary track) and is generally the best I’ve seen the film. There’s a more recent 4k release from Lionsgate as well, but as I don’t have a 4k TV I’ve never seen it (and it includes mostly the same extras with only a “Tribute” featurette for new stuff).

Evil Dead II is available on streaming for subs of IndieFlix. You can also rent or purchase it from the usual online places. (Vudu has it to own in 4k for $5!)

The Movie
Evil Dead II serves as something of a quicky remake of the original as well as a continuation. The first twenty minutes or so are a basic recap/redo of the events of the first film, with just Ash and Linda making the trip up to the cabin and unleashing the demons. On the commentary track Bruce Campbell mentions there was some confusion when the film was first released, as fans were expecting a straight sequel and “there’s some question about whether or not Ash would be stupid enough to go back to the cabin again. Which he IS.” says Campbell. That’s not the intent, though it would be fun to try cutting the two films together… 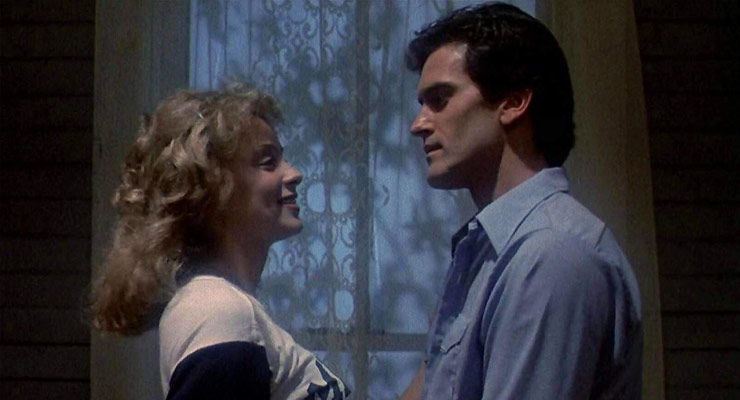 The tape is played, the demons released and Linda turned into an undead creature that Ash has to kill. Once Linda’s in the ground we revisit the end of Evil Dead, with the “force” blowing through the cabin and sending Ash flying through the trees before crashing head-first into a convenient puddle. The inventive camera work that Raimi is famous for is on full display here and given how much these sorts of shots and energetic camera work have become commonplace it’s impossible to describe how exciting and new this all looked when I first saw it. That camera spin up and away from Ash after he recovers from being possessed? That was some amazing shit back in the day!

After an attempt to escape the woods is thwarted by some model work and a really good matte painting of a destroyed bridge, we settle into another night at the cabin with our hapless deadite hunter. This sequence contains some of the most fun parts of the film, including an attack by Linda’s head, a chainsaw wielding muppet, Ash’s hand being possessed and beating the crap out of him before being severed by chainsaw and a cat-and-mouse game between Ash and his severed hand that includes a flood of blood (and other substances) being sprayed from the walls. It also includes one of my favorite bits, when Ash falls and the entire cabin – including animal heads and fixtures – starts laughing at him. Ash joins in at first before finally succumbing to the horror of it all and screaming instead. Most of this is gory as hell, but it’s also funny and fun – which is weird to say when you’re giggling at a man screaming “who’s laughing now!” while chainsawing his own hand off. 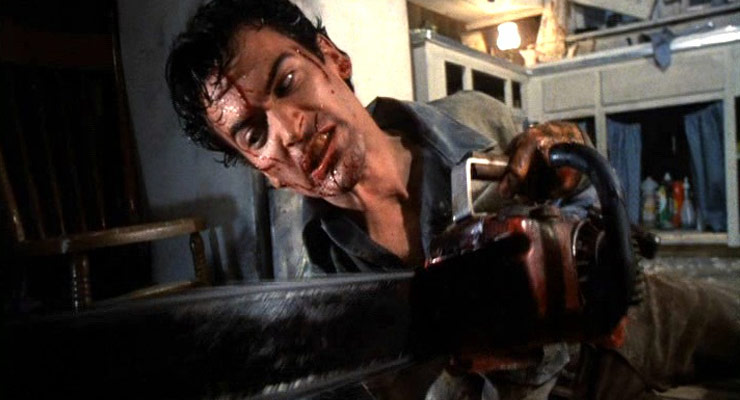 Personally, I could watch Bruce Campbell vs himself (or parts of himself) all day, but alas other characters must be introduced – including the daughter of the cabin’s owner, Annie (Sarah Berry), a research assistant Ed (Richard Domeier) and local red-neck couple Jake and Bobbie Joe (Dan Hicks and Kassie Wesley). I say alas, but having them around to spread out the hurt is probably a good idea and there are some great bits including these characters as well (Flying eyeballs to the mouth, hair eating and one poor schmuck getting a Kandarian dagger to the chest.)

Also introduced is a demonic version of Annie’s mother, Henrietta, once buried in the fruit cellar. This horrific, rotting creation of Greg Nicotero and crew is all kinds of gross fun – especially once she leaves the cellar and starts attacking people. Undead Henrietta is played by Sam Raimi’s brother, Ted and the poor kid had to wear the heavy suit in stifling heat. You can actually see sweat pouring out of the ear of the monster at one point while it’s spinning in the air. 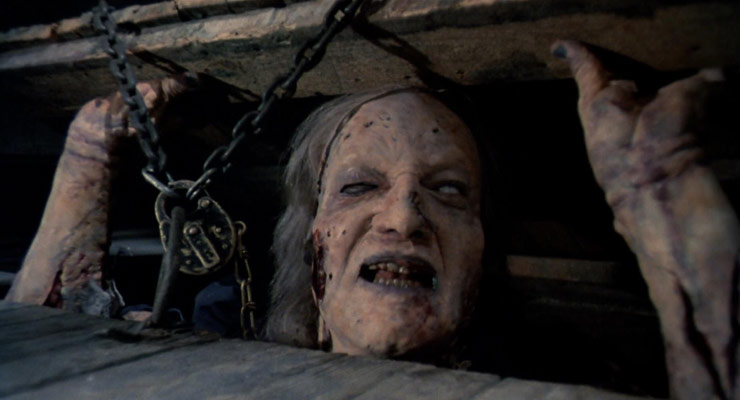 There are too many gags and monsters to cover, really, with poor Jake taking Ash’s place as a deadite punching bag for a while, more blood fountains, an evil version of Ed, another demonic Ash, stop motion snake-heads and, finally, the epic creation of Ash’s chainsaw hand in the work shed. (Does anyone else remember Ash saying “tool shed” instead of “work shed?” No?) Finally it’s down to Ash and Annie to use the pages from the Book of the Dead to make the demons flesh (as a giant, wooden head covered in the faces of those previously possessed) before sending them back to where they came. Unfortunately for them both this doesn’t quite got to plan and in the end Annie will be dead and Ash… well, Ash will find himself in another place and another time… 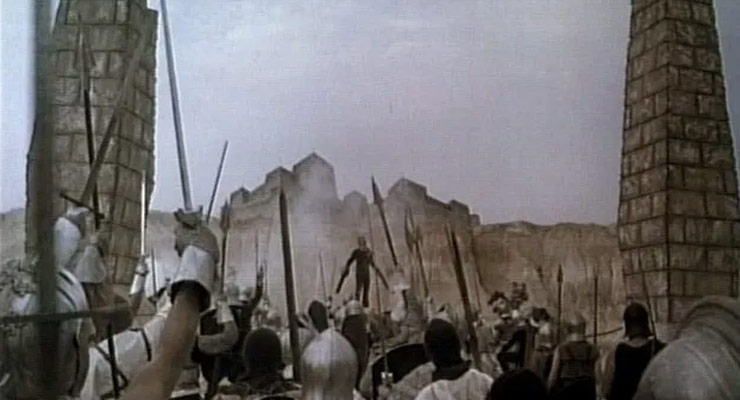 It’s not a perfect film – some of the effects are a little dodgy, the acting is a little (or a lot in some cases) wooden and things get a little sloppy around the edges sometimes (you can see light fixtures in the beams of the cabin roof at one point and that Henrietta costume apparently ripped in the crotch during the filming and they didn’t fix it). None of that matters, because it’s 50 lbs of fun in a 5lb bag. There just SO MUCH good stuff crammed in there that you never have to wait more than a minute or two before getting another, more awesome round of gags and gore.

Many of the people involved in The Evil Dead II have gone on to bigger and better things – Raimi of course would become a famous director of films like the original Spider-Man trilogy and Drag Me to Hell, Bruce is a fan-favorite B-movie actor and personality and Nicotero is an Executive Producer on The Walking Dead (and occasional director). This is still one of my favorite projects that they’ve each worked on.

The Bottom Line
I’ve got very few reservations about recommending Evil Dead II, unlike the first film. It’s just a blast to watch and I really cannot recommend that commentary highly enough. In fact, I kinda want to watch it again with the commentary on… Evil Dead II is fast, furious, funny and freaky and it’ll make you laugh as you gag. It’s also one of my favorite films. How about you?