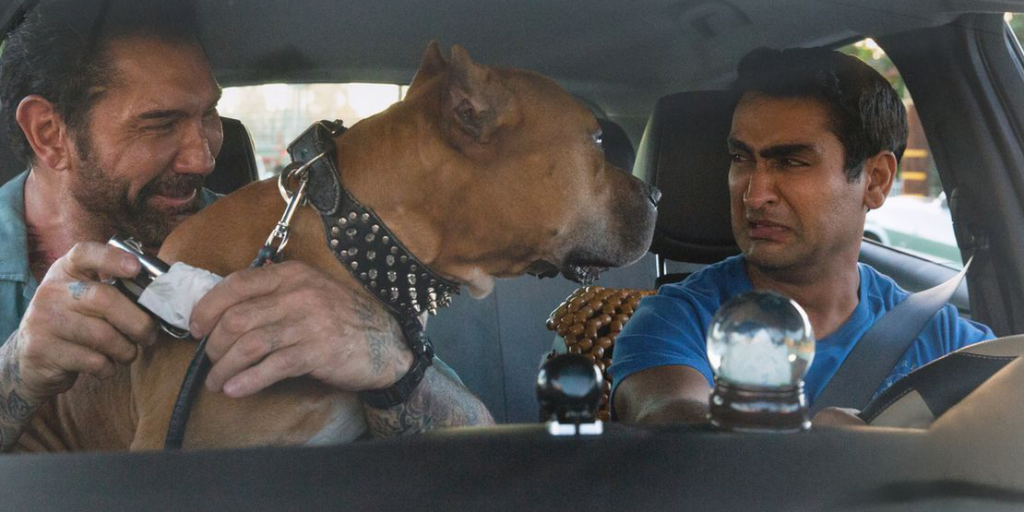 He’s one tough obsessed cop who just had his partner killed by a cartel of criminals. He has a female superior. He’s good at his job. While his tough guy attitude might have helped him in his job, it has also alienated him from his family.

Through a series of comic mishaps, the cop gets forced into working with an irritatingly sensitive guy. Over the course of a day, the men will go from hating each other to becoming friends and becoming better people by learning from each other.

This is the plot of both The Man (2005) and Stuber (2019). While the plots may be very similar, what separates them is how the film defines masculinity. 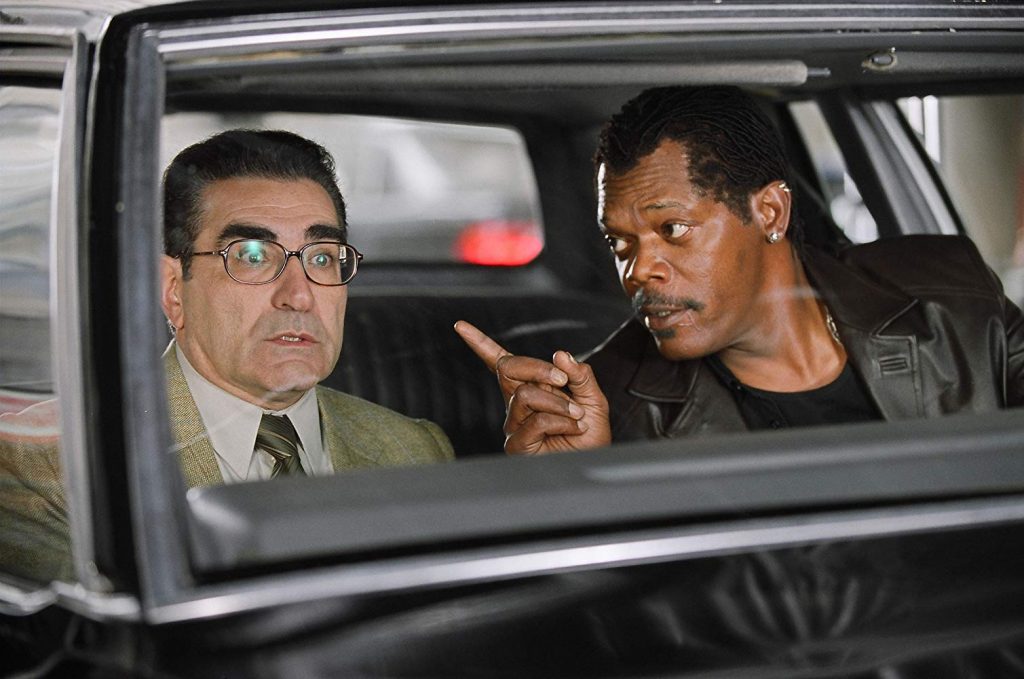 The Man began as a script by Jim Piddock and Margaret Oberman and subsequently re-written by Steve Carpenter (Carpenter appears in the making of documentary). A comic actor, screenwriter Piddock had previously appeared with star Levy in multiple Christopher Guest mockumentary movies. Carpenter had rewritten Blue Streak (1999) for Man Director Les Mayfield.

The film has a lot of jokes about the buttocks and bowels. A recurring joke has Andy farting at inopportune times after eating red meat. Another recurring gag has Vann interrogating an informant named Booty (Anthony Mackie) by hitting his butt with his car. At one point, Vann running him into a fence at a basketball court. The other players laugh at Booty. At the beginning of the film, Vann shoots Andy in the bullock with a training bullet, then kicks him in the same place. A woman grabs Andy’s ass when he is put in a holding cell with female prisoners. At the end of the film, Vann gets shot in the butt himself.

Masculinity in the Film

Similarly, characters use the word “bitch” when referring to characters in a submissive position. When Andy gets taken out of custody under Vann’s supervision, Vann tells Andy that he’s Vann’s bitch. When Andy confidently poses as a buyer for weapons, he says that Vann is his bitch and makes a humiliated say it loud enough to hear. Andy then proceeds to slap Vann on the behind.

In The Man, a large part of masculinity is defined by trust. Andy and Vann are about the same age and have many things in common. Both men have young daughters who are ballerinas. However, what differentiates them is their attitudes about trust. Andy tries to give everybody the benefit of the doubt. Vann does not trust his own mother.

The film never explains why Vann does not trust anybody other than he lives that sort of life style. His partner has just been revealed to be a dirty cop working with the gun cartel. Internal Affairs suspects that Vann is also dirty, as most dirty cops statistically tend to have dirty partners. This puts an added pressure on him.

Vann is an effective workaholic ATF agent. In his personal life, Vann is an absentee father divorced from his wife, who is now with the more sensitive Mark. On this particular day, Vann has promised to go to his daughter’s Ballet recital. He tells both his wife and daughter cannot make it due to his job. When his wife mentions that Mark is going to be there, Vann derisively asks if he will be dancing too.

A constant victim of circumstance, Andy is an out-of-town dental supply salesman from Wisconsin. Before the film begins, Andy accidentally bought a stolen rug in Turkey. The fact that the Turks have a warrant out for Andy’s arrest makes him more suspect to law enforcement and more appealing to the arms dealers. At the beginning of the film, Andy’s wife tells him just to come back from Detroit safely as it is much rougher than Milwaukee.

Unlike Vann, Andy is more comfortable with women and femininity. While Vann mocks ballet, Andy practices ballet with Vann’s daughter. He says that he helps his daughter with her pirouettes too. He also insists that they go to the daughter’s recital when they have to wait around for the gun traffikers.

Andy also does not tolerate any harsh behavior. This includes rudeness or foul language very well. After being beaten up and taken by Vann, Andy gets to speak to Vann’s superior. Andy tells her that he was more disturbed that Vann was rude than that he was abusive. When Vann says fuck, Andy teaches him to curb his language by adding “crying out loud” after fuck, so he will eventually say “For crying out loud.”

In both The Man and Stuber, the sensitive guy has a conversation with the cop, which will inform how he acts at the climax of the movie.

In the third act, Joey Cain takes Andy hostage. Vann subtly tells him to use his mandible defense, which signals Andy to bite Cain. This leads to chaos that allows Vann to defeat Cain.

The Man has an ending similar to the classic comedy The Front Page. In The Front Page, Newspaper editor Walter Burns learns that his star reporter Hildy Johnson is leaving the paper to get married. At the end, Burns gives Hildy his watch as a farewell present before sending him off on a train. Burns then calls ahead to the next station to report that Hildy Johnson has stolen his watch.

In The Man, Vann goes to the airport with Andy to see him off. Since he got shot in the butt, he has a bullet permanently lodged there. When he sets off the metal detector, Airport security orders a cavity search. When airport security finally shows up to give Vann the cavity search, he directs them to Andy. As Andy screams at airport security about how he did nothing wrong, Vann says, “that’s my bitch.” 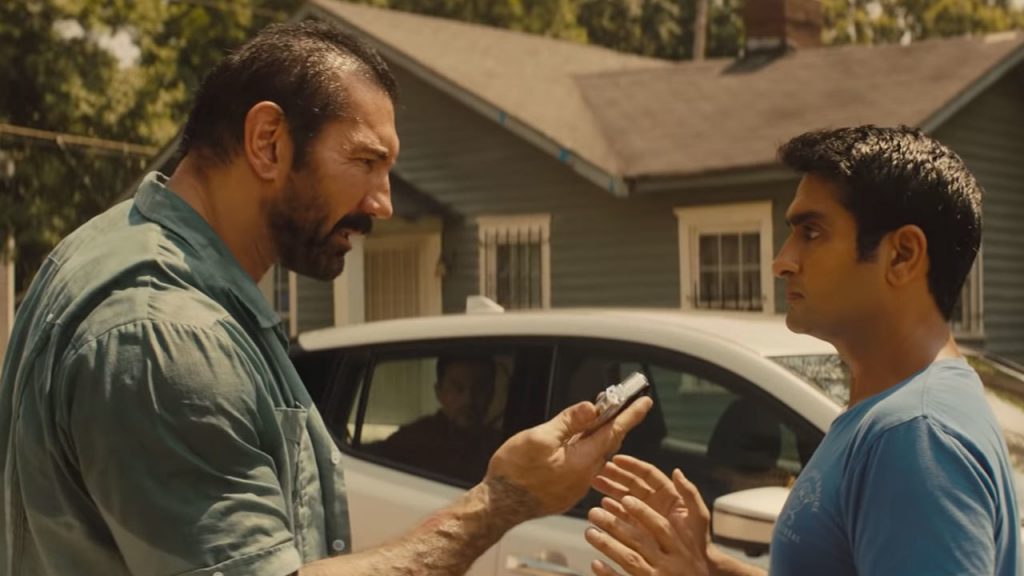 The film began as a title and idea from Screenwriter Tripper Clancy’s manager, who saw it as a comedy version of Collateral (2004). Clancy’s script got noticed by director Michael Dowse and stars Bautista and Nanjiani, who helped rewrite it.

Masculinity in the Film

Stuber’s viewpoint on masculinity has less to do with trusting people and more to do with decision making. At the beginning, Stu is very careful about all of his decisions. This ranges from backing up to signing on a dotted line to start his own business. All decisions are made with a certain amount of hesitance. Stu also tries to be polite to everybody. He tries to keep his star rating with difficult customers, but it is very difficult to please everybody.

Vic forcefully makes decisions based on impulse. Any problem he has, he will quickly find a solution to. A great example of this comes in the climax. Stu and Vic hide in a truck with a whole bunch of factory workers, while the ad guy looks for them. Stu calls a whole bunch of Ubers with the factory workers. Sick of this slow tactic, Vic drives them out through a wall.

This dynamic between the two characters comes to a head in a sporting goods store, where they engage in a huge fight involving the equipment in the store. After Vic bullies Stu by threatening him with a zero-star rating, Stu snaps and hits Vic with a golf club. This evolves into a fight involving both the destruction of the store and an exchange of ideas. Throughout the fight, Vic refuses Stu’s pleas to talk it out, saying it’s for “little girls.” At one point in the fight, Stu hits Vic with an oar multiple times while screaming that real men cry and express their feelings.  This leaves both of them tired and on the floor, having bonded over the fight they just had.

Vic had a terrible childhood that shaped him. His father left him in the desert at night, while he went into town to get drunk and have sex. Vic sat clutching the knife all night. He claims that it is what made him a man. He refers to experiences that he thinks will toughen Stu up as Stu’s “night in the desert.”

Unlike Vann in The Man, Vic seems to be in a less volatile situation. While he has a female boss, he seems to have a pretty good friendship with her. He has not completely lost his family because of his attitudes. However, he has a strained relationship with his daughter Nicole (Natalie Morales) because of it. He has scheduled getting lasik on the same day his daughter has an art gallery opening. He says he will be there, but she remains doubtful.

In the original script and cut, his relationship with her is even more complicated than the final cut suggests. A deleted scene has Nicole telling a story about Vic locking her in a room with two boxes as a child. One had the key to get out, the other had a scorpion. Nicole climbed out the window and went to play down the street.

Stu leads an emasculated existence. Besides driving for Uber, he also works at a sporting goods store, where he works for Richie (Jimmy Tatro), who is deeply insecure about his masculinity. Richie constantly humiliates and puts down Stu, but later reveals that Stu is his best friend.

His love life has also hit a wall. He plans to open an all-female gym with Becca (Betty Gilpin), a friend he slept with one time while watching When Harry Met Sally… (1989). After breaking up with her boyfriend, she asks Stu if he wants to come over to her place and watch When Harry Met Sally… again with the same results. However, Vic’s mission keeps getting in the way of his potential encounter.

This relationship with Becca went through many versions in the subsequent drafts in the script. At one point, Stu was trying to buy a wedding ring for Becca. However, Nanjiani felt that it should be something that is Stu’s fault. Since Stu has not told her his feelings, it is his fault.

In the third act, the primary bad guy is about to shoot Nicole. Stu jumps in front of the bullet, saving her life and allowing Vic to vanquish him.

At the end of film, Vic learns that Stu is dating Nicole when he comes over to her house for Christmas. As Stu and Nicole lead Vic inside, Stu says to him, “this is your night in the desert.”

In both films, there is both a cop whose tough guy behavior has hurt him and a meek businessman who gets involved in his case. What changes is the film’s treatment of masculinity.