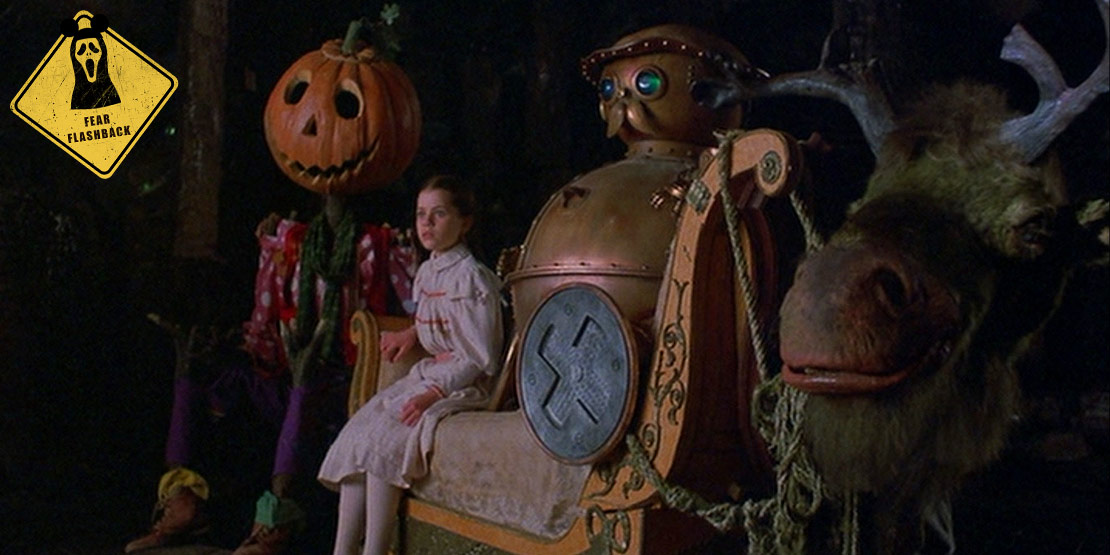 “If this is Oz, Dorothy, I’d rather take my chances back in Kansas.”

I loved The Wizard of Oz as a kid. Ah, who am I kidding, I love The Wizard of Oz now. When I was a kid, though, watching the movie was an experience – a once-a-year treat. Nowadays I can watch it whenever I want… and I rarely do. Somehow access has created apathy.

That love of the original motion picture never translated to other adaptations, however, and I haven’t even seen most of them. (Did you know there were film adaptations before MGM’s 1939 opus? Me either.) The ones I have seen – The Wiz, Sci-fi’s Tin Man and even The Muppet’s Wizard of Oz – haven’t really stuck with me. I couldn’t tell you much about any of them. (And I still haven’t seen Raimi’s Oz the Great and Powerful, either.) 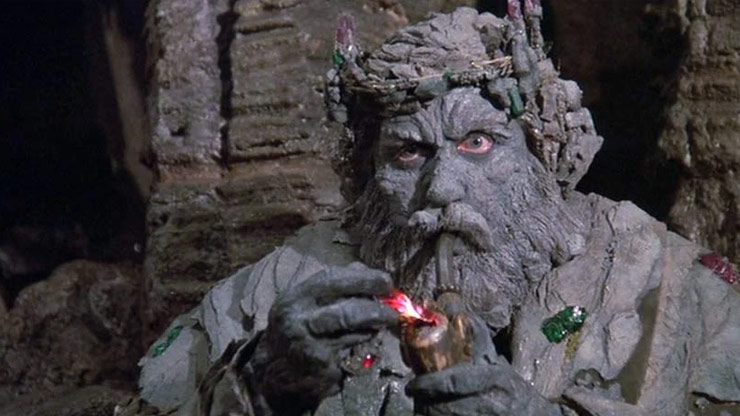 I thought that Return to Oz was one of those. Images from the film seemed, particularly Tik-Tok and Jack Pumpkinhead, very familiar and I assumed I’d seen it and it just hadn’t left much of an impression. Watching it for this review I realized I could not have seen the film before. It would have scarred me for life. It would probably be one of my favorite films from the 80’s. I wish I had seen it back then, but I’m also glad I got to see it now.

Medium
Return to Oz is streaming on Disney Plus, which is where I watched it for this review. The picture quality on Disny Plus is a little soft and grainy, but that may be due to original film elements or (more likely) the quality of my internet stream. There’s also a 30th Anniversary Blu-ray available, though it can sometimes be difficult to find. If you can find a reasonably priced copy of the 2004 DVD there are a number of extras – including an interview with Fairuza Balk – which aren’t included on the Blu-ray.

The Movie
Sixth months after the events of The Wizard of Oz Dorothy (Fairuza Balk in her first film role) still can’t sleep and is threatening chickens.  Auntie Em (Piper Laurie) and Uncle Henry (Matt Clark) are on the edge of financial ruin after the tornado. They’re also worried that the little girl’s stories about emerald cities and talking animals is a sign of significant mental illness. They’re desperate enough to send Dorothy for a brand new treatment. It involves the use of electric shocks… 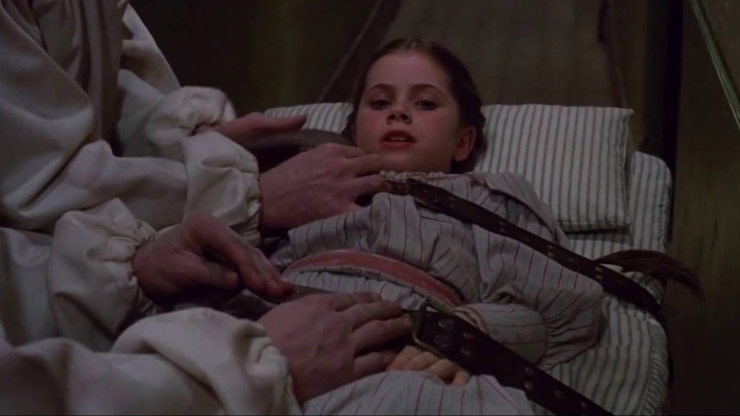 This is a movie that has a little girl strapped down in an asylum, in the dark, waiting for elecro-shock therapy while patients locked in the basement scream and a lightning storm rages outside. It’s bleak and depressing and horrifying in a way that none of the other Disney films we’ve watched so far this month can hope to match. This is a horror movie, plain and simple – and though there are elements of fantasy and whimsy it’s all scary enough that Disney should have had a sign at the theater like the ones at old carnivals: This Is A Dark Ride.

When another girl in the asylum (Emma Ridley) helps Dorothy escape during the storm, she’s swept away in a flood and finds herself once more in Oz. This is NOT the Technicolor MGM Oz of our childhood, however. This is the darker, more threatening Oz of L. Frank Baum’s original books. So instead of being greeted by Munchkins Dorothy and her talking chicken,Billina (Mak WIlson) land in the Deadly Desert and must walk on stones to avoid being turned to sand. (And the stones don’t seem to keen on being walked on, either.) Although they quickly find Dorothy’s old house and the start of the yellow brick road it’s obvious that things have gone terribly wrong in Dorothy’s absence. The road looks like a Maine back road after a particularly harsh winter, all frost heaves and potholes. And the Emerald City doesn’t look like it’s fared much better. 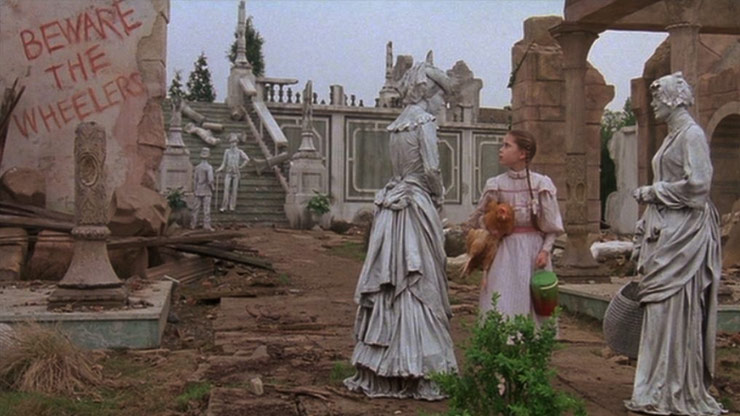 Fairuza Balk is  pretty damn good as Dorothy, even managing to sound exactly like Judy Garland at times, which is disconcerting. Like everything else that touches on the older film it’s a reminder of how different things are now.

This is a post-apocalyptic Oz. The Emerald City is in ruins -stripped of its emeralds and with its residents turned to stone. There’s even graffiti sprayed on the walls, “Beware the Wheelers.” They turn out to be a gang with wheels for arms and legs who dress like rejects from The Warriors. They’re scary at first – with faces like horrible masks – but become objects of ridicule as the movie goes on. (Turns out those ARE horrible masks. Or hats. Something like that.) 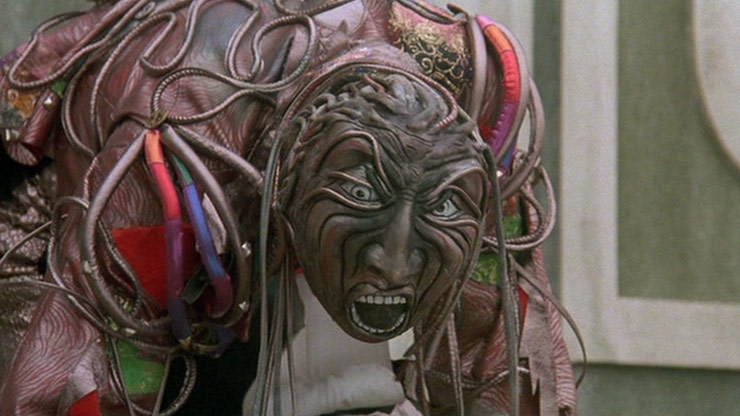 None of Dorothy’s old friends can help her. Tin Man and the Cowardly Lion are both turned to stone and the Scarecrow is nowhere to be found. Dorothy DOES find a mechanical man named Tik-Tok (Michael Sundin and Timothy Rose), who helps her defeat the Wheelers – after she’s wound up his Thoughts, Speech and Action keys. Tik-Tok tells Dorothy about the coming of the Nome King and how he has caused all the destruction and taken Scarecrow. 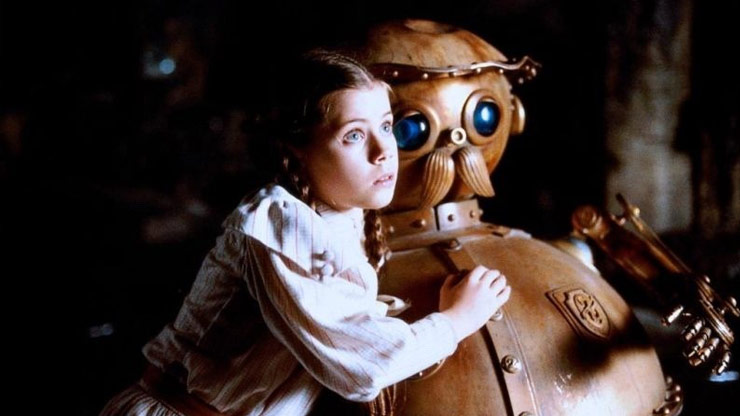 The defeated Wheelers direct the Dorothy, Tik-Tok and Billina to the castle of Princess Mombi (Sophie Ward, Fiona Victory and Jean Marsh), suggesting she can help them find Scarecrow. It’s a trap, though. Princess Mombi – who lives in a 80’s supervillain lair – is a bad witch. And she has a ton of severed heads that she exchanges with her own as a fashion statement. Yes, there is a scene where she shows Dorothy around her collection of living(!) severed heads and swaps out her current head for a new one. Mombi then decides that Dorothy’s head will do, once she’s grown enough, and imprisons her in a tower. (Tik-Tok, having inconveniently wound down all his Action, is unable to help.) 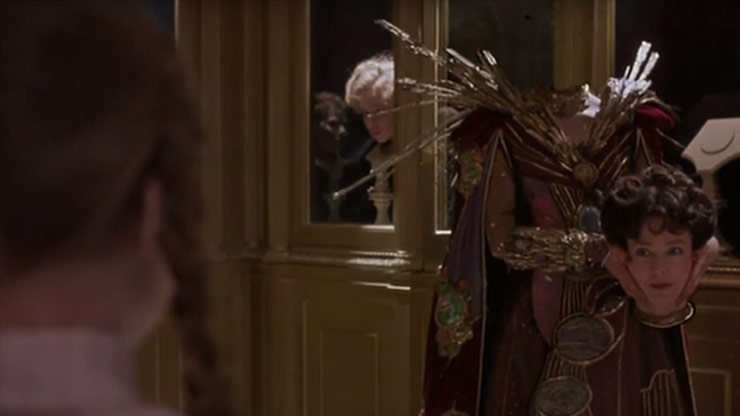 In the tower Dorothy discovers a talking stick man with a pumpkin for a head. This is Jack Pumpkinhead and in general look and demeanor he’s Jack Skellington. I mean, like, he could grow up to BE Jack Skellington. Screw it – that’s head-cannon from now on.

Poor Jack has been brought to life by something Mombi has called the Powder of Life, which makes unliving things alive. Which gives Dorothy an idea and leads to one of the most horrific sequences I’ve ever seen in a Disney movie. The powder is kept in the case with Mombi’s original head and Dorothy has to steal the key from the sleeping witch, creep into the room with all the heads (also sleeping) and take the powder. Unfortunately she ends up waking the original head and has to flee from the room as all the heads wake and begin moving and screaming.

Running through that dark room with all those screaming severed heads? Come ON. This is nightmare fuel. This is awesome!

Dorothy and the others escape by cobbling together a couple of couches and the talking moose head from Outback Steakhouse. (It’s called a Gump, but seriously. I’ll never be able to look at that animatronic moose head the same way.) Using palm fronds as wings the contraption manages to fly and the unlikely group heads towards the Nome King’s Mountain, hoping to rescue Scarecrow and return Oz to normal.

There are plenty more horrific things to come in the confrontation with the Nome King (Nicol Williamson), including seeing a Wheeler’s face turn to sand, fall off and disintegrate in the Deadly Desert, talking rock faces, doors and walls made of grasping stone hands (that remind me of scenes from Viy – actually a good chunk of the Nome King sequences remind of Viy for some reason), and a stop motion stone giant that tries to eat people. 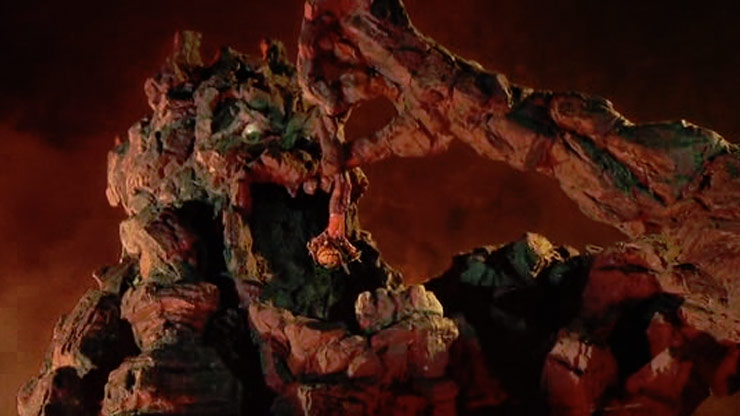 This IS a Disney movie, despite all the horror, so there’s a chicken-related Deus Ex-Machina and a happy ending. Things go back to normal – as normal as they can be for Oz, that is. But not before a special effects death sequence that, no shit, reminded me of ending scenes in the original Evil Dead movie.

Did I just compare a Disney scene with Evil Dead? Yes. Yes I did.

The Bottom Line
I thought I’d seen Return to Oz before – and parts of it do seem familiar – but I think If I HAD seen it I’d remember. Something this dark and beautiful and wondrous would definitely have made an impact. Hell, it DID make an impact, as I really want to see it again already. It’s got great performances, fantastic puppetry and stop animation, good cinematography and some of the scariest and gruesome things you’ll ever see – Disney or not. I loved it, and can’t recommend it enough. Unless you’re a little kid.