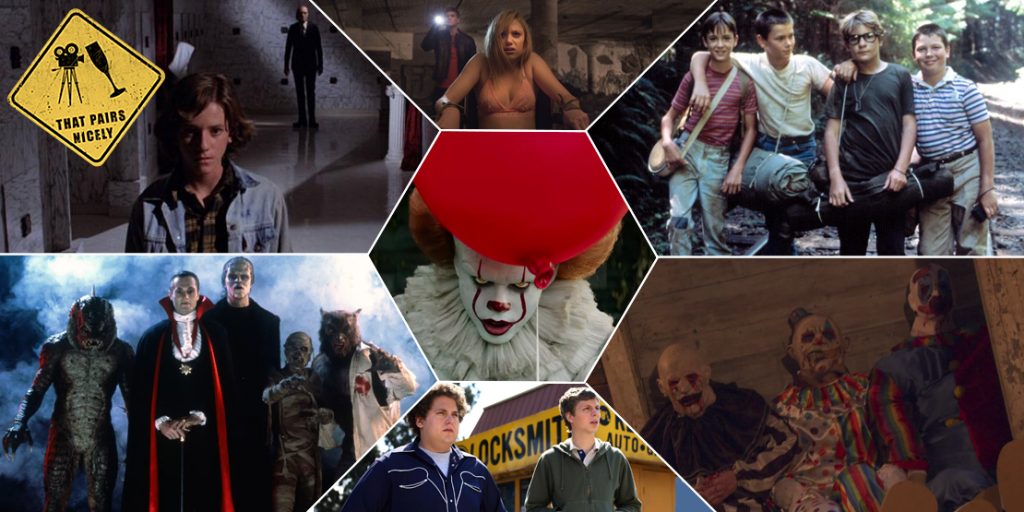 Most of the time we’re left with wanting more. We want something similar, yet new at the same time. You don’t want to watch the same film again, you want to watch something that pairs nicely. Here at ScreenAge Wasteland, we’ve selected six films that you should watch after It.

Here are the pairings.

I know a low budget, found footage horror might not seem like the obvious film to recommend after watching It; apart from the fact that they feature one similar trait: clowns.

After the success of The Blair Witch Project in 1999, we were inundated with a slew of releases that used the same formula, yet failed to conjure up the magic that Blair Witch did. They haven’t all been bad (the Spanish release Rec comes to mind) but they’ve definitely been more miss than hit. Hell House LLC is one of the few that falls into the latter.

It follows a documentary crew who are investigating a tragedy that occurred 5 years earlier, when a group of young adults who were in the business of setting up haunted houses during the Halloween season, decided to leave New York City and set up ‘Hell House’ in the small town of Abaddon. By the following morning 15 people were confirmed deceased at the attraction. The documentary crew manage to get their hands on some never before seen footage from that fateful night courtesy of the only surviving member of the original staff.  The tapes reveal the story of what really happened that night. Cue paranormal events, razor-sharp tension and some truly bone-chilling scares.

A gem of the found footage genre, Hell House LLC should induce some terror. Especially if you have a thing for clowns.

Stand By Me | Romona Comet

While It is rightfully categorized as horror, it is primarily a coming of age story about the bonds of friendship. The Losers’ Club, the horrors they go through together and apart, not only from a malevolent clown, but from the adults in Derry, and Derry itself, is the foundation of the story.

Stephen King introduced us to the Losers and Pennywise in 1986, but he had penned another coming of age story in Different Seasons, his 1982 collection of short stories. This novella was titled The Body, and was the first of the short stories to be adapted for the big screen (two others being Rita Hayworth and the Shawshank Redemption in 1994 and Apt Pupil in1998).

Directed by Rob Reiner, The Body was subsequently renamed Stand By Me and featured four up and coming young actors, Wil Wheaton, Jerry O’Connell, Corey Feldman, and River Phoenix. Dripping with nostalgia and carried by extremely strong performances, Stand By Me follows four friends in Castle Rock, Oregon (the location was changed from the now famous, fictional town of Maine) as they set off together on a journey to see a dead body said to be of a boy missing from the next town over.

While there are no evil clowns to contend with, our four friends still struggle to deal with adolescence, troubled homes, and adults who consistently fail them. Like the Losers, their bond is strong, especially that of Gordie (Wheaton) and Chris (River Phoenix), but the painful reality of growing up and growing apart is inevitable.

Reiner perfectly captures King’s gift for writing the trials and tribulations of youth and friendship and in doing so, delivers a captivating and touching coming of age story with Stand By Me.

A small-town group of kids in 1987 must band together to fight an ancient evil that appears every set number of years. They’ll also have an intense discussion about why the Wolfman had to wear pants. If you find yourself looking for a movie with similar themes to It, but with a decidedly comic bent, then The Monster Squad might be just the movie for you.

At this date, after three seasons of Stranger Things and an ongoing nostalgia boom for all things 80’s, The Monster Squad feels almost postmodern, like the result of a typical elevator pitch. “What if we crossed It with The Goonies?” While it never feels quite like a modern film – it’s a little to earnest for that – you’ll find a lot of familiar tropes (the parents who are more obstacles than help, the nerdy hobby that turns out to be the key to combating the bad guys, the terrible themed rap song).

Directed by Fred Dekker (Night of the Creeps) with a screenplay by Shane Black (Iron Man 3) the movie follows a group of typical 80’s kids as the try and prevent Dracula, The Wolfman, The Mummy, The Gill Man and Frankenstein’s Monster from plunging the world into eternal darkness. While you get familiar themes of acceptance, friendship, and coming-of-age/loss of innocence there’s not a lot of real depth here. The Monster Squad is mostly about having fun with some horror nostalgia and having the fat kid kick the Wolf Man in the nards. (And having some top-notch – for the 80’s – monster makeup. That Gill Man kicks ass.)

The Monster Squad is a funhouse reflection of IT, a foul-mouthed 80’s latchkey kid that happens to share similar themes and settings as it’s bigger, darker brother. It’s not going to leave you with much emotional impact at the end (unless Frankenstein’s Monster hugging a teddy bear brings you to tears), but The Monster Squad is pure 80’s monster-fan fun.

It (2017) made me laugh. A lot. And that was pretty much the extent of my enjoyment as there wasn’t really anything scary or horrific about the movie. The kids did a really good job and Skarsgard as Pennywise did the role justice, but at the end of the day it reminded more of a comedy than a straight up horror film. Therefore, I feel like a perfect movie for It to be paired with is the timeless teen romp classic, Superbad. Both group of teens are on a mission with incredibly high stakes involved. One, attempting to end a murderous creature’s terror over the town’s children and the other about high school popularity, getting wasted and scoring with chicks. Dire times indeed.

Superbad, much like the Losers Club, is about a group of social outcasts who are simply trying to navigate the struggles of ending their Senior year of high school while heading into the great unknown of college and adult life. In order to turn around their nonexistent social life and with hopes of landing some fantastic ladies, Seth and Evan have devised a plan to be the bringers of alcohol to a big high school bash by using their somewhat friend’s, McLovin, fake ID. Along the way, our heroes run into all sorts of obstacles similar to IT such as bullies with mullets, weird looking homeless dudes, and gross scenes that involved blood. Both films do a fantastic job of reminding us of our childhoods in some capacity. On one hand you have riding our bikes, hanging with some friends and fighting a relentless monster. One the other, just trying to fit in while having an epic adventure to try and get laid. The good old days.

Superbad is just a fun time and perfect movie to unwind to if IT does happen to freak you out. It is hilarious and irreverent with a lot of obscene jokes and gags. There are numerous great characters from McLovin who will steal your heart to some cops who know how to have a great time. In the end, it is about a struggle we have all had to face from the difficulties of school and maintaining lifelong friendships all while just trying to survive. Just like with the kids from It.

Not since the 80’s have we had such a wealth of horror films aimed at kids. Stranger Things might’ve opened the flood gates, but PG-13 horror had been on the rise since the release of Coraline and Monster House in the mid 00’s. Their popularity led to films like Paranorman, Goosebumps, Light’s Out, Krampus, Happy Death Day and Scary Stories to Tell in the Dark, and while it doesn’t exactly qualify for the list seeing as it’s rated R, I believe It belongs in that group as well. Although it might be a tad bit too bloody for younger viewers, It is an excellent jumping off point for pre-teens looking to get into the genre. Loaded with jump scares and creepy imagery, the film is a cinematic haunted house designed to excite more than horrify. The film works so well because it’s about more than just a spooky alien clown. It has likable characters and a coming of age story younger viewers can identify with. It’s one of the best gateway horror films ever made but it’s not the best gateway horror film ever made because that film already exists and it came out a good seven years before King created Pennywise the dancing clown.

And that film was Phantasm.

Released in 1979, Phantasm is a surreal masterpiece of horror that feels like one long fever dream of dread that’s made even more terrifying because it’s from the point of view of a kid. Don Coscarelli created the ultimate child’s horror film in that it’s the first (and frankly one of the last) to accurately depict what it’s like to be a kid. It doesn’t just throw a kid in danger in the hopes that the audience will be afraid for them but rather, roots the film in the familiar so you understand why they’re afraid. The majority of the film feels like a nightmare you’re desperately waiting to awaken from but the film does a brilliant job of suggesting that everything we see in the film might be born from real-life traumas, emotions and/or fears — the loss of family, being forced to grow up early, the instability of the present and the uncertainty of the future. While IT does a great job of introducing kids to horror, no film has done a better job of depicting the inherent scariness of childhood quite like Phantasm.

In It, Pennywise the Clown is very much an embodiment of childhood fear. This notion of fear is represented in It Follows on the young adult level: the fear of STDs.

It deals with themes of growing up and confronting your fears while It Follows deals with subject matters like intimacy and anxiety. Director David Robert Mitchell remarks how protagonist Jay “opens herself up to danger through sex, [but] sex is the one way in which she can free herself from that danger.” Both films let the protagonist(s) take control of their fears, but I believe It Follows hooks the viewer in better.

If anything else, It Follows is a great film for teachers to show during Sex Ed as an alternative to the “abstinence speech”.

Those are our pairings; now it’s your turn. What do you think would pair nicely with It?

For more It content, check out Romona Comet’s Chapter Two review and our Spoil Away! spoiler thread.