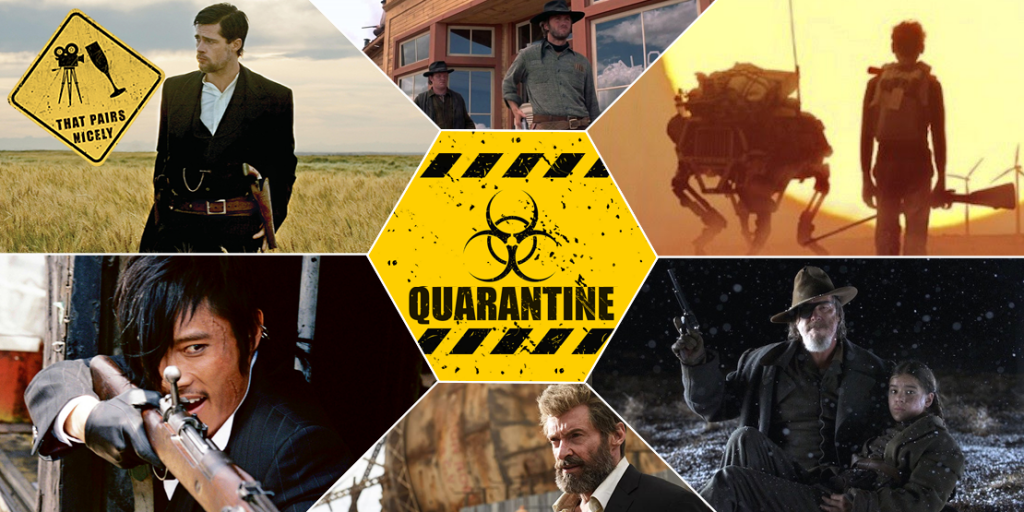 Here at ScreenAge Wasteland, we’ve selected six films that you should watch during quarantine if you’re in the mood for some westerns!

Every now and then a genre will be declared dead. Film, literature, music. Doesn’t matter. Sooner or later a think piece will be written about why rock is dead…or science fiction…or horror. The great American western is another genre that gets declared dead from time to time. In the 60’s the western was written off, but soon reinvigorated by the spaghetti westerns of Leone and anti-hero Eastwood. It happened again a decade or two later only to be saved by the earnestness of Costner’s Dances With Wolves and by Eastwood (again) with his dark meditation on human nature Unforgiven. I think the lesson to be learned here is that if there is a compelling story to tell, genre doesn’t matter. Any genre can be given new life by a story that is well told, with engaging characters, and that taps into the universal experiences that bind us all together.

The Coen’s True Grit is such a film. Filmed with the Coen brothers’ masterful attention to detail, it tells the story of Mattie Ross (Hailee Steinfeld), a young girl on a quest to bring her father’s murderer to justice, and “Rooster” Cogburn (Jeff Bridges), the U.S. Marshall she convinces to help bring him in. The story is based on Charles Portis’ classic novel by the same name. The novel was previously brought to life with John Wayne himself in the role of Cogburn. The first film adaptation rightly deserves its place as a beloved American western. This one, however, blows that one out of the water.

True Grit is a Coen film through and through. Their trademark juxtaposition of humor and violence is on display as well as their unique use of characterization as a story telling device. The leads excel in their roles, with Steinfeld in particular turning in an incredible performance as the determined and nearly fearless Mattie. Bridges strikes the right tone with his portrayal of Rooster Cogburn. Whereas John Wayne basically played himself for two hours, Bridges owns the role and loses himself in it. A clumsy drunk in once scene, experienced law man in the next, Bridges beautifully captures the spirit of the Cogburn in the novel. This True Grit sticks closer to the tone and spirit of the book, with much dialogue taken straight from the page. The supporting cast is spot-on as well. Every single person with a speaking part is perfectly cast and delivers an authentic performance, right down to the cadence of their speech and the colorful language they use.

Since it’s the Coens, you know it’s going to be shot well. It is a beautiful film to look at. The landscapes of the west lures viewers in and immerses them in the world as it unfolds onscreen. One would be hard pressed to find a better example of the contemporary American western.

If I were to tell you I picked a James Mangold western to watch, most of you would assume I picked 3:10 to Yuma. I went a different route. I went with 2017’s Logan. Before you get all uppity and go on about how “Logan isn’t a western” and “it’s a comic book movie”. Boo-hoo. Save it. Logan is very much a western. How many westerns are there where you have a lawman and/or bounty hunter tracking down an outlaw? The movie starts on the Texas-Mexico border for crying out loud. If that isn’t enough, there is a chase scene near train tracks. Just with vehicles and not horses. Logan is one of the better films made by an already established filmmaker with an impressive resume. This was the perfect send-off for Hugh Jackman and Sir Patrick Stewart in their respective roles. Hugh Jackman portrays a version of Wolverine we had yet to see; one that is aging, tired, beaten, and defeated. As much as this movie is a western, it is a movie about found family. The dinner scene alone is worth watching. I am sure I’m preaching to the choir with this but if you haven’t watched or re-watched Logan in some time, I highly recommend you do so. Get a good cry out. You deserve it.

The Good, The Bad, The Weird | Lee McCutcheon

Set in 1930s’ Manchuria, The Good, the Bad, the Weird is a wacky Korean take on the spaghetti western formula. It follows three main characters each with vastly different personalities, as they get caught up in the hunt for a map that leads to a mysterious treasure. The Good is a bounty hunter, out to track down the Bad, an evil hitman. The Weird is a wildcard that manages to get himself caught up in the mayhem. Played by Song Kang-ho (Parasite), he is definitely the highlight and provides lots of laugh out loud moments. Add to this great action and spectacular set pieces, and you are left with fantastic entertainment from start to finish.

The Assassination of Jesse James by the Coward Robert Ford is a herculean film in the same way we speak of Giant, Cleopatra, or Lawrence of Arabia–majestic in scope yet masterful in subtlety. It’s a dash of The Searchers, a splash of Unforgiven, and a heaping portion of true American history bringing to life a methodically swelling romance of camera and landscape; of actor and character; of vision and authentic humanity. Make no mistake, Jesse James is precisely a western–it checks all the boxes–but it’s also so much more. A picturesque character study of the legend himself, Jesse James, shown through the rendering of his gang, those closest to him … although, one very well could claim no one was truly close to Jesse.

Over its nearly three hour runtime, what feels like an event film on the surface will slowly dip you into the pool of unkempt jealousy and just barely boiling subtext. The outlaw lifestyle is a dangerous one, unless you’re a phony. Then it’s just one of entitlement and disappointment. That’s the story of Robert Ford finding himself in the orbit of Jesse James. Now thirteen years removed from its 2007 release (arguably this century’s finest cinematic season), The Assassination of Jesse James is quite possibly the most beautiful film captured in the last decade. It certainly should have been Roger Deakins’ first Oscar. Cap it off with Brad Pitt delivering THE performance of his career as the notorious bandit and you’ve got yourself a true piece of cinema.

Like cracking open that aged bottle of $88 bourbon once or twice a year; slowly sipping; pacing yourself to fully appreciate all the notes and nuances the barrel, caramel, and burn bring to the pallet–yeah, Jesse James is like that. You’ll no doubt feel slightly buzzed when it’s over because you just experienced something of great weight. So pour me some of the good stuff, but make it a western.

Clint Eastwood’s second movie and first Western as a director is also a guilty favorite of mine. Probably because it’s as much a horror movie as it is Western, with a vengeful spirit come back to a town so desperate to save itself it’ll sell its soul. Twice. Though heavily influenced by both Sergio Leone and Don Siegel (whose names can be found on graves in the town cemetery) it’s still clearly an Eastwood film –  it’s quieter and less ostentatious than Leone’s Man With No Name films, and it absolutely refuses to hold your hand, tell you what to believe or even if you should root for the ‘hero.’ (Who murders and rapes with impunity.) With a soundtrack that mixes an ever-present desert wind with an equally sparse score by Dee Barton, Eastwood never gives you a clean moment to cheer or a clean character to cheer for. The whole film is rough, uncomfortable and unpleasant – not unlike The Stranger himself. Look for the odd moments of black humor to leaven an otherwise bleak and dark film, one that’s still haunting me years after I first saw it.

The pedigree of western dystopian sci-fi films is tough to live up to. At the top of the heap, you’ve got George Miller’s Mad Max films followed by a mountain of mostly pretenders that fall well short of the mark. Jake Paltrow’s sophomore film Young Ones falls somewhere near the upper end of the middle of that pile. It ain’t great, but it’s not terrible either. That may not sound like a ringing endorsement for a film included on a list of recommendations, but I wouldn’t suggest it if I thought you’d be wasting your time.

Young Ones has three things going for it: world building, solid art direction and cinematography, and Michael Shannon (and Shannon should count twice). For the tiny budget this film must have had, the filmmakers succeed at presenting a fully realized and believable world that is often beautiful to look at, if not always compelling.

And that’s where Young Ones runs into problems. The story avoids many of the established cliches it could fall back on for story beats, but fails to develop its characters enough to make use of its originality. If you can look beyond this one flaw, there’s a lot to like about Young Ones. You can find it streaming on Amazon Prime and a few other services right now.

What are some westerns that you have watched recently?