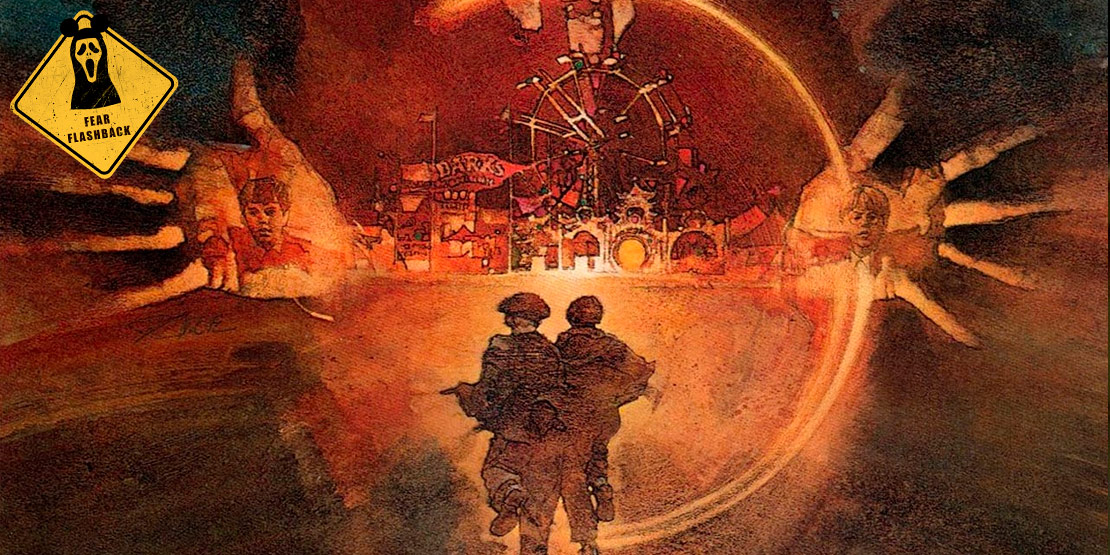 Ray Bradbury was something of a fixture of my early reading. His dark fantastic fiction was  something different from the mostly hard science fiction I read at the time – Asimov, Heinlein et. al. It was more… human, I guess. It concerned itself less with the how and why of a spaceship travelling to Mars and more with how human beings might face the unknown. His most science-fiction story, Farenheit 451, is also my least favorite of his works. In general I preferred his short stories – and still have collections like The Martian Chronicles, The Illustrated Man and I sing the Body Electric.

Something Wicked This Way Comes is an exception to that rule. The prototypical ‘dark carnival’ story (though not the first – look to Charles Finney’s The Circus of Dr. Lao for a contender to that crown), it’s also the first “dark and magical childhood horror” novel I ever read. This kind of story would become something of a regular thing for horror writers of a certain age. Stephen King’s It, Dan Simmons’ Summer of Night and Robert R. McCammon’s Boy’s Life all contain echoes of Bradbury’s tale.

I’m not certain if I saw the Disney adaptation first, or read the novel. Certainly they’ve become a little mixed up in my recollections – I expect the Dust Witch to have a balloon for instance, and for laughter to literally be the best medicine. I loved the film, though – the look and the feel of it – and it left me with a lifelong suspicion of Jonathan Pryce. That man is just not to be trusted. 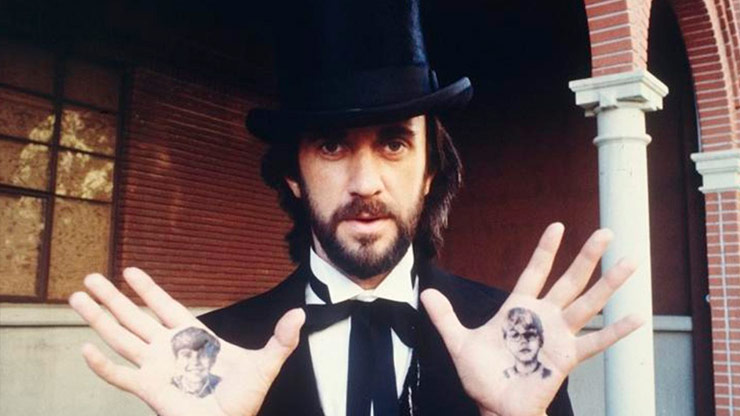 It’s been a long time since I last watched Something Wicked This Way Comes and I have to admit to approaching it this time with a level of nervousness. I’ve mentioned before about how childhood favorites sometimes lose their luster – and things that seemed dark and scary seem to have the worst time making that transition.

Medium
Not unlike The Watcher in the Woods, Disney has let Something Wicked This Way Comes lie fallow in the streaming landscape. It’s not to be found on any service, not even Disney’s own. A 2004 DVD is pretty much the only legal way to watch it, unless you’ve managed to DVR one of the rare broadcasts. I think it’s a film that would benefit greatly from an expanded and upgraded presentation, so I can only hope that Disney sees fit to resurrect it – perhaps in time for Halloween?

Movie
The opening shots of Something Wicked This Way Comes includes music and titles over an oncoming train. It’s an excellent and ominous bit of foreshadowing. That opening piece of music – the soundtrack is by James Horner – has echoes in John William’s Harry Potter theme, at least to my ears. Other pieces – like “The Dust Witch” – remind me of parts of Star Trek II: The Wrath of Khan, which Horner had done the previous year. This is quickly followed by a voice over introduction to the bucolic village of Green Town, a proper slice of rural Americana. (The voice-over is by Arthur Hill, who I remember most from The Andromeda Strain.)

We get introduced to a good chunk of the town’s residents as we follow the young main characters – Will Halloway (Vidal Petrson) and Jim Nightshade (Shawn Carson) – from their school detention (for whispering) to their homes. There’s the barber, Mr. Crossetti () who longs for female companionship, the cigar-store owner, Mr. Dengel (), who dreams of riches, and of course Charles Holloway (Jason Robards, Will’s elderly father who pines for a youth and courage lost to time. Everyone in town has a wish unfulfilled – including the rambunctious Jim, whose father is absent, probably for good.

Just as an aside, Jim Nightshade is like the best name ever.

A good start – yeah, everyone is so economically defined and covered in ‘good old days’ nostalgia that it almost feels like a cheat, like a shortcut to characterization. It works, though – in part because we partake in that nostalgia as well. It’s not our own, but a certain kind of movie nostalgia – one that Disney is pretty good at evoking. Kids in suits and caps, barber poles spinning and the combination  druggist and ice cream shop. Life isn’t perfect in Green Town – but it’s damn close. 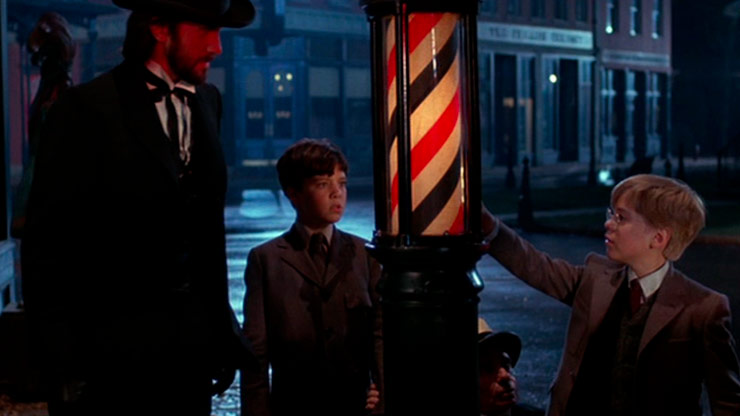 There are notes of darkness on the horizon, though. There’s that train a-coming. And a storm. It feels like twilight lasts for most of the day. A vagrant named Tom Fury (Royal Dano) wanders into town ahead of rain clouds, peddling his lightning rods and sounding an awful lot like Tom Cullen from Stephen King’s The Stand. Jim buys one and installs it on his roof. I’m sure nothing will come of it, though.

Jim and Will hear the carnival train coming in the night and sneak out to get a look. Mr. Dark’s Pandemonium Carnival – which somehow sets up in the blink of an eye. Jim is fascinated, but Will – the more cautious of the two – is nervous. Carnivals almost never come in the Autumn.

Will’s right, of course – Mr. Dark (Jonathan Pryce) and his carnival are not what they seem. The carnival is a way to trick and trap the souls of the townspeople. The glittering Mirror Maze (and what’s up with these Dark Disney films and the mirror maze – see Watcher in the Woods) shows you things that might be. The carousel can run you back and forth in time – you could be a young man again, or even a child, as happens to Mr. Dark’s sidekick, Mr. Cooger (Bruce M. Fischer). This isn’t obvious at first, but as Jim and Will catch Mr. Dark’s attention and ire things begin to escalate quickly, leading to the boys being hunted (and saved by that lightning rod). 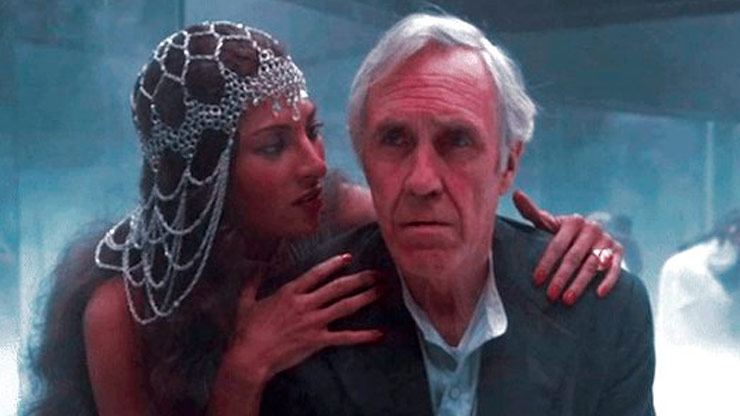 I’m more appreciative of Robard’s character this time – his limitations and regrets. His line about 3 O’clock being soul’s midnight. (Or when the fucking cat always gets me up.) The genius moment after Mr. Dark confronts him and starts up the parade again with a funeral march, playing on Charle’s (and Will’s) fear of his mortality. When I was a kid this was a dark adventure story about kids saving the day against the morbid desires of adults. Now it’s more about the courage of a lonely, aging librarian and the love he has for his son. 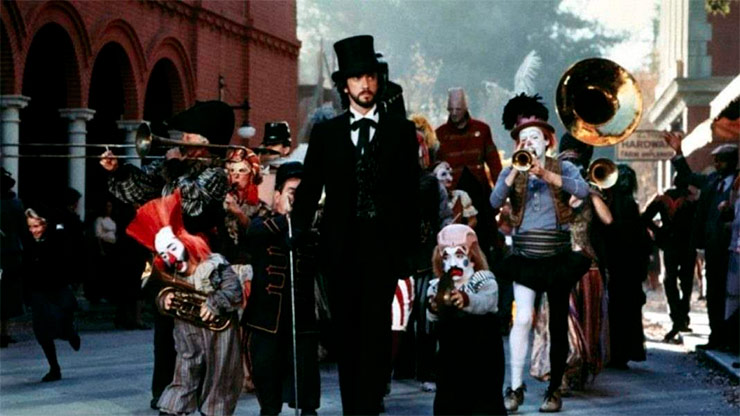 Where the film falls down for me now is in the details. The moments of weakness and struggle with the townfolk are glossed over – their economical characterization revealed to be the shortcuts they appeared to be at first. We never really get to know them and so their sins and punishments – the man who wants women becomes a bearded lady, the aged librarian longing for youth a beautiful blind woman – don’t have the same horror and resonance. Charles is the only one who gets to have a detailed back story, really, and it’s the moments of conflict with him and Mr. Dark that spark the most horror and fascination. The confrontation between the two in the library makes the film come alive and contains some of the best lines. “We butter our plain bread with delicious pain.” Pryce in those moments is truly frightening, accomplishing by dialogue and posture what all the “clenching his fist until blood flows” couldn’t do.

My memory from the book is that Jim is much more tempted than he is in the film. Here he’s pretty much coerced and forced into contemplating a bleak choice. The ending, too, feels truncated – despite some decent special effects – and the catharsis of joy and laughter defeating the darkness is likewise shortchanged. Lightning and rain wash away a multitude of sins, but seeing Tom Fury spear the Dust Witch (a criminally underused Pam Grier) like Ahab going after the whale should have been epic, instead of a blink-and-you-missed-it moment. That tornado is pretty damn good, though – as are Dark’s aging effects. 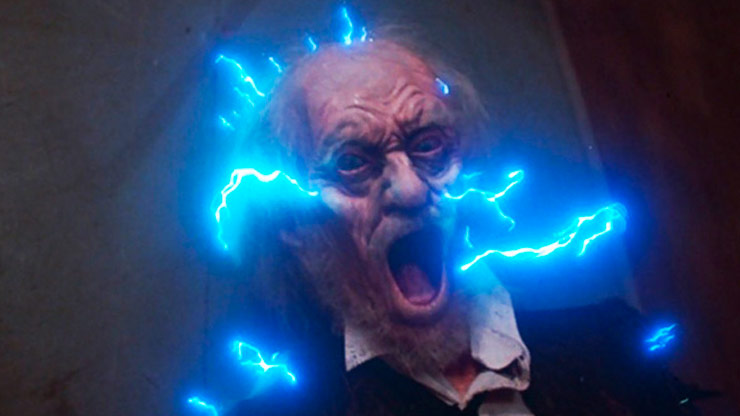 It’s interesting reading about the might-have-beens. Sam Peckinpah was interested in directing at one point. What would THAT dark ride have looked like? Especially if he’d managed to get Christopher Lee to play Mr. Dark?

Bottom Line
Something Wicked This Way Comes is not, sadly, as scary nor as good as I remember. That’s not to say it’s a waste of time – it’s still got a dark wonder to it and is worth a watch just to see Robards and Pryce playing off of each other if nothing else – it’s just not the epic conclusion to this series I had hoped for. Still way better than The Watcher in the Woods and I did enjoy it, it just ran into the movie in my head and came up short.

And here we come to the end of our long, dark ride of Disney’s “horror” films. And if none of them were quite as dark as our usual fare, it’s a relief, right? At the end of the 1980’s lightning struck the House of Mouse (with the help of a mermaid) and cleaned all the dark cobwebs away (except in the odd corners of individual films, where Mufasa falls and Clayton hangs). All that’s left are these dim echoes of a world in which Disney took a darker path – and wonders about what might have been.

So what Dark Disney moments do you remember? Anything as horrific as the spider invasion in Something Wicked? Worse? Let me know!