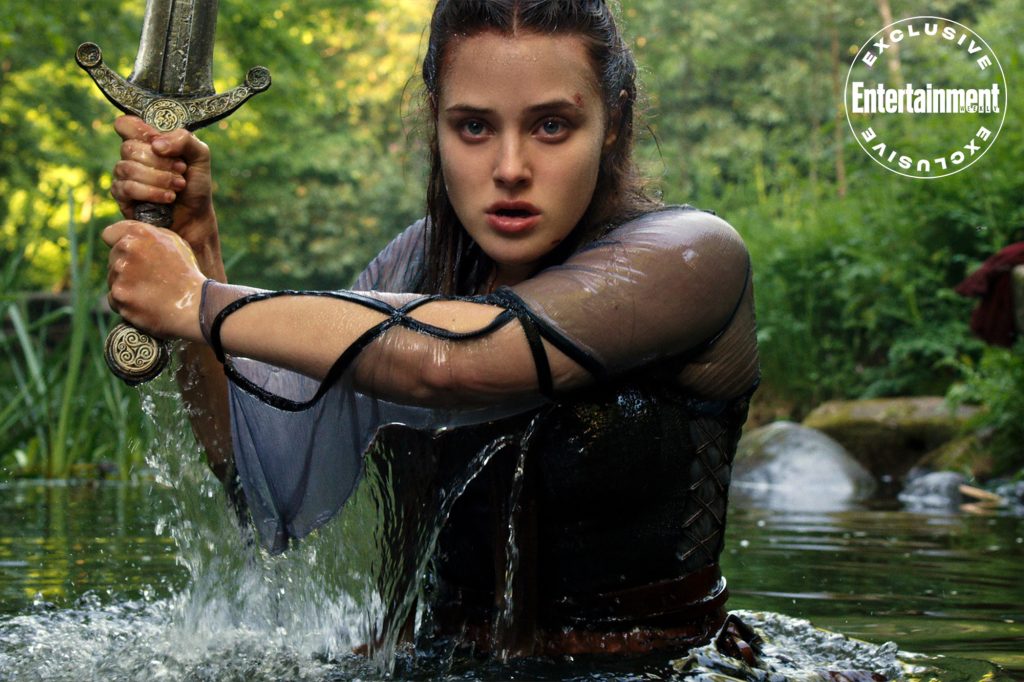 Thanks to Entertainment Weekly we have our first look at the upcoming adaptation of Cursed, a new take on the Arthurian mythology. Tom Wheeler, who wrote the novel, will serve as showrunner, and executive produce with the novel’s illustrator Frank Miller.

Cursed asks “What if Nimue, the future Lady of the Lake, wielded Excalibur instead of King Arthur?” Check out a handful of images from the first season below.

CURSED (L TO R) KATHERINE LANGFORD as NIMUE and DEVON TERRELL as ARTHUR in episode 105 of CURSED Cr. ROBERT VIGLASKY/Netflix © 2020

On the adaptation, here is what Wheeler told EW:

“Realizing these characters from page to screen was a unique and thrilling creative challenge. I think first and foremost when casting for Cursed, Frank and I were looking for a mythological truth, actors who could bring the emotion and the humanity to legendary characters without losing the sense of elemental magic and epic stakes. Led by Katherine Langford, who is equal parts classic hero and sword-swinging badass, this extraordinary cast has brought such depth, commitment, and heart to this story. We can’t wait to introduce them to audiences around the world.”

The other day for fun I was trying to figure out how to adapt King Arthur for a modern audience when there are so many adaptations of the myth that already exist. I wanted to see King Arthur: Legend of the Sword when it was first announced, but the film ended up not looking that good. However, Cursed looks like it might just have all the right pieces in place. It’s taking the legends away from its focal point and telling them with a former supporting character. The series does look, unfortunately, similar to the recent take on Robin Hood starring Taron Egerton which was criticized for its clothing looking too modern (i.e., machine stitched).

In addition to Langford, Devon Terrell will star as Arthur, “a charming mercenary Nimue meets on the road”. There are also a few Westworld alums that I will see if you can spot in the images above. Otherwise, that’s all I have to say about this series right now, but I think I will definitely give it a shot when it comes out later this summer on Netflix.

Will you watch Cursed or are you tired of Arthurian mythology?