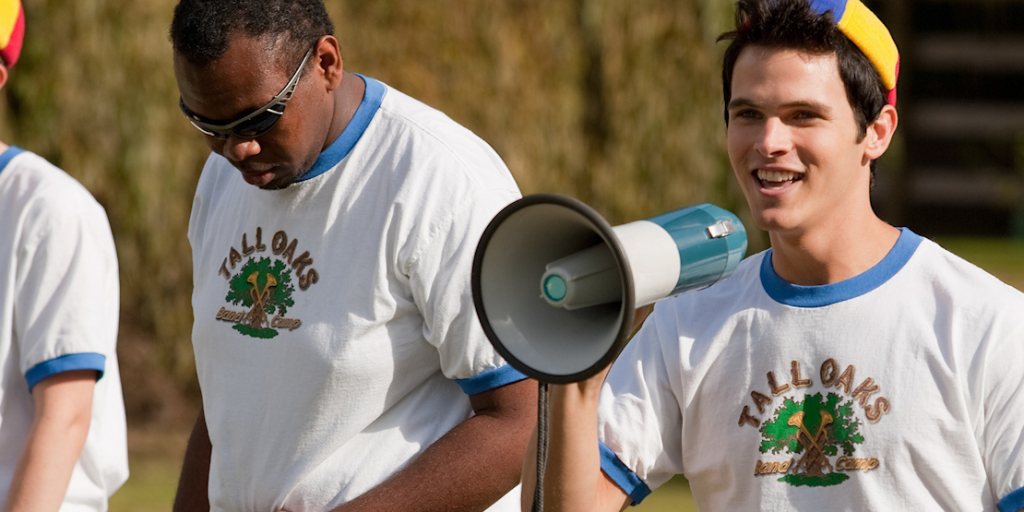 In 1999, Universal Pictures released American Pie. While the financial success of There’s Something About Mary (1998) popularized the gross out genre, American Pie gave it a new audience. Instead of focusing on 30 something oddballs and schlubs, American Pie focused on young people. This led to a whole bunch of gross out movies about high school and college students.

After two sequels, the makers of American Pie decided to release a new direct-to-DVD video series called American Pie Presents. This new series would be produced for a fraction of the cost of the main series. It would feature the most memorable cast member (Eugene Levy). It would also include the most memorable elements of the formula (the hero being caught in awkward sexual situations, an obnoxious guy named Stifler).

Among other changes, the direct-to-DVD sequels upped the gratuitous sex and nudity. This is best exemplified by Eugene Levy’s Noah Levenstein (often referred to as the face of the series on DVD featurettes). In the original series, he acts as an awkward dad. In the direct-to-DVD series, he acts more and more debaucherously from one sequel to the next. It became a running joke that the innocent looking Levenstein created whatever debauched event the group went to.

Since the main series does not tend to view the public revelation of sex as traumatic, the exploitation and broadcast of sex and nudity becomes comic fodder. The filmmakers present the spectacle of sexuality differently based on gender. When a man has a sex act publically revealed, it’s a form of embarrassment and shame. When it happens to a woman, the film takes her out of the plot.

Probably the best way to explain spectacle of sexuality in the series is to focus on Jim Levenstein (Jason Biggs). Jim’s plotline revolves around him getting caught in various sexual acts. This includes him trying to watch a foreign exchange student Nadia (Shannon Elizabeth) change over web cam with his friends. His friends then make him go back to his house to have sex with her when she starts masturbating on camera. Although Jim plans to send the video link to a few friends, he accidentally e-mails it to the entire school. The original American Pie has Nadia sent back to her home country once her sexuality is revealed on camera. The original film also ends on a joke of Jim dancing on the webcam for Nadia’s amusement.

American Pie 2 features Jim, Steve Stifler (Seann William Scott), and Finch (Eddie Kaye Thomas) breaking into the house of two lesbians to broadcast their sex life over a walkie-talkie. The lesbians catch them and realize their scheme. They agree to fulfill the men’s sexual fantasies if they perform the same acts on each other. When the guys leave freaked out, the women decide to continue having sex to their new audience. Stifler later has his fantasies fulfilled when the two women reveal they are not lesbians and agree to sleep with him.

In both American Pie series, sex is connected to a sort of wealth. When the film wants the audience to not identify with a character’s sexual humiliation, they tend to make them rich. The leads are average middle class guys who cannot get laid.

The most debauched character in the series, Steve Stifler, is also one of the wealthiest. People do not like him, but often hang out with him because of what he can do for them financially. His mother is also known for having wild sex throughout the series.

Which brings us to Band Camp, a movie about Steve’s younger brother, Matt.

The World of the Film

Band Camp is set in a movie universe. The characters are all characters seen in previous comedies. The world of the film also exists outside of legal consequences. The worst that happen is Matt gets expelled from high school.

The premise is a Premise of Poetic Justice. In the real world, justice is based around legal consequences for immoral and criminal behavior. In the premise of Poetic Justice, an eccentric judge hands down a specific sentence based on the character’s situation. Often, this means bringing together two characters of the opposite gender that would ordinarily not come together. Eventually, this forced relationship will blossom into something more. A great example of this is What Happens in Vegas (2008). In that movie, a couple who drunkenly got married in Vegas.  They agree to amicably separate until the Man (Ashton Kutcher) wins a three-million-dollar slot machine prize with a quarter from the Woman (Cameron Diaz). An eccentric judge sentenced to “six months hard marriage.” In Band Camp, eccentric guidance counselor Sherman (Chris Owen) puts Matt into band camp to teach him a lesson.

Many of the actresses playing supporting roles have worked in media related to sexuality and nudity. Former pornographic actress Ginger Lynn appears in the film as a nurse. Angela Little (Miss August 1998) and Rachel Veltri (appeared in Playboy) appear as Sheree and Dani, camp counselors who dance naked in the shower.  Jennifer Walcott (Miss August 2001) appears as “Bathroom Girl.” Lynn, Little, and Veltri have special features dedicated to them on the DVD.

In Band Camp, Noah Levenstein becomes a supervisor at the camp after his daughter-in-law gets pregnant.  Since parents barely exist in this movie, he provides a father figure to the various campers, especially Matt.

In this film, Levenstein acts pretty similar to his characterization in the main stories. He’s the sort of geeky dad that teenagers do not want to get advice from. He also does not seem to know the Stiflers well (he’s surprised by Matt’s existence). This is the last time he will be this way in the spinoff series.

Band Camp has the most experienced creative crew of any American Pie Presents sequel.

Director Steve Rash began his career with his most prestigious movie to date: The Buddy Holly Story (1978). The film was nominated for three Academy Awards, including Best actor for Gary Busey. It won for Best Music.

As a director, he has primarily directed comedies. This includes the Patrick Dempsey vehicle Can’t Buy Me Love (1985) and Under the Rainbow (1983), a movie about the making of The Wizard of Oz (1939). His films primarily focused on eccentric outsiders integrating themselves into a more conservative society. Son-in-law (1993) focused on a college student integrating into farm life. Held Up (1999) focuses on an irresponsible man (Jamie Foxx) becoming a hostage in a small southwest town.

Rash brought on cinematographer Victor J. Kemper. A veteran cinematographer, Kemper shot both Dog Day Afternoon (1975) and The Jerk (1980). In the 1990’s, Kemper started primarily shooting comedies, such as Beethoven (1992), Tommy Boy (1995), and his first collaboration with Rash, Eddie (1996).

As a character, Elyse Houston (Arielle Kebbel) is passionate, but uptight. She needs to let loose and have fun. In the movie, this translates to her needing to get drunk and have sex. Both functions are provided by Stifler. Her knowing friend Chloe (Crystle Lightning) tells her this.

The film has Elyse get inspiration for her great musical piece after having a brief sexual encounter. In that scene, Matt kisses his way down to her crotch. This awakens something in Elyse and she heads off to write music.

Moral Quandary of the Film

This is the only movie to date that examines the ethical implications of videotaping naked women without their consent. However, a lot of it is left on the cutting room floor.

Other Women in The Movie

In this film, women are revealed to be complex people. Many of them have speeches revealing character in the film. In terms of deleted scenes, many build character or repeat plot points.

Chloe is a tough chick with a lot of tattoos and piercings. Computer and band nerd Ernie Kaplowitz (Jason Earles) has a crush on her, but she has no interest in him. When Ernie brings her a soda with his robot, she is at first freaked out. Then she feels touched by this gesture, as nobody has ever been that nice to her.

A deleted scene provides more background on Chloe. In the scene, she explains that her mom pushed her to become great at everything because she wanted a star.

If Noah Levenstein serves as the father of the film, Nurse Sanders (Ginger Lynn) serves as the mother. She often appears in scenes where Matt has been injured. She also provides an order to the camp the Levenstein does not. While he often stays in his office, Sanders actually interacts with the bandmates.

Sheree (Angela Little) and Dani (Rachel Veltri) are two counselors at the camp, who often appear together. Both had work done. Sheree has breast implants. Dani had a bikini wax. Matt films both of them in the shower.

There is one moment that separates the two women. When Matt first meets Sheree, she slaps him and throws a drink in his face to send a message to his brother.

There’s more material on the DVD with her. This includes multiple scenes of her trying to get a date with Brandon Vandecamp (Matt Barr), the head of the rival band. It also includes a scene where band member Jimmy (Jun Hee Lee) teaches her slang.

In the late 1990’s and early 2000’s, the creation and broadcast of nudity and sexuality over the internet became mainstream comedy material. This ranged from the American Pie series to an episode of Reba (2001-2007). Even Steve Rash’s Road Trip: Beer Pong features a subplot where a video of the lead playing a song naked goes viral.