For a short time in the 1940’s, comedy director Preston Sturges became one of Hollywood’s premier filmmakers. As a director for Paramount Pictures, he created many films that are considered classics today.

Sturges came from the theater and his films have an added theatrical quality to them. His films often focus on characters playing roles unlike themselves. The Lady Eve (1941) has a con woman playing a role to marry a naïve millionaire’s son. Sullivan’s Travels (1941) tells the story of a man pretending to be a hobo to understand poverty. In Hail the Conquering Hero (1944), a man discharged from the military (Eddie Bracken) lies about being a war hero. Similarly, Sturges will often not cut away from actors when they perform a bit. The pace of many scenes depends more on the actor playing the role and not the editing.

As a comic writer of his time, Sturges often clashed with the Hayes office. The Palm Beach Story (1942) took a light tone towards the subject of divorce. The Miracle at Morgan’s Creek (1944) involves a small-town girl (Betty Hutton) getting pregnant with six babies from a drunken honeymoon with an unknown soldier. Now she has to find a man to pretend to be the father. In Kenneth Bowser’s documentary Preston Sturges: The Rise and Fall of An American Dreamer (1990), Hutton said that “you weren’t allowed to shoot movies like that. Period.” While these premises seem relatively tame, they caused serious scandal in the 1940’s.

After leaving Paramount, Sturges never quite recovered. He made a few films, but never regained the stature he had at Paramount. 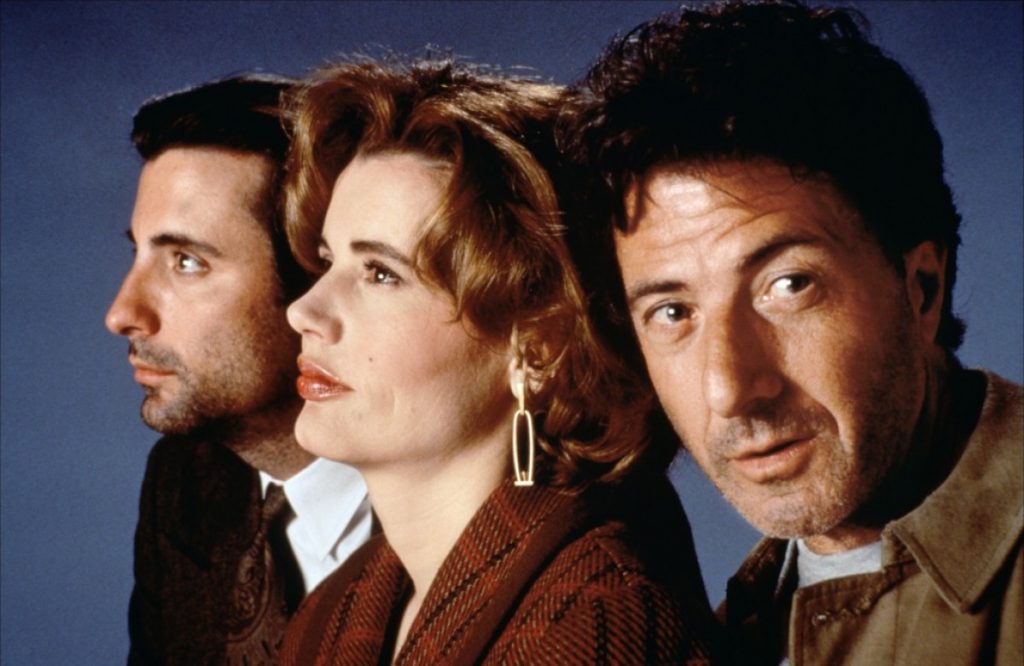 Hero tells the story of Bernie Laplante (Dustin Hoffman), a selfish conman known for swiping women’s purses. He inadvertently becomes a hero when a plane crashes in front of his car. He saves many people including ambitious reporter Gale Gayley (Geena Davis), who offers a million-dollar reward to her rescuer. This leads them to homeless Vietnam Veteran John Bubber (Andy Garcia), who decides to claim to be the hero after Bernie gives him his shoe. Except for taking credit for the act, Bubber fits the more conventional narrative of a hero. He’s honorable, handsome, and willing to stick his neck out for anybody. Bernie agrees with this assessment, but still wants a cut of the money.

Hero came from a story idea by producer Laura Ziskin, Alvin Sargent, and screenwriter David Webb Peoples: what if the hero of a tragedy was an asshole? No stranger to anti-heroes, Peoples co-wrote Blade Runner (1982) and wrote Unforgiven (1992).  Inspired by Sturges, he revised Ziskin and Sargent’s idea with his own ideas. For director, they hired British filmmaker Stephen Frears, who had just scored a hit in America with The Grifters (1990). In an interview with the New York Times, Peoples says that the movie belongs to Frears and Ziskin.

Frears gets a great cast for this movie. After working with John Cusack in The Grifters, Frears decided to cast his sisters Joan and Susie. Joan Cusack plays Laplante’s wife, while Susie Cusack plays the rookie public defender assigned to him. Chevy Chase turns up in an uncredited role as Gale’s boss, while Stephen Toblowsky plays his second in command.

A dark satire, Hero came out in an era of profound plane crash movies. Fearless (1993) explores the existential and spiritual concerns of a plane crash. Alive (1993) told the story of a real-life plane crash in the Andes. Hero focuses on how the media makes people into heroes. This includes making John Bubber re-enact Bernie LaPlante’s actual acts, but with him literally carrying Gale out of the plane romantically.

Although it had some of the biggest stars of the time, producer Ziskin got the impression that Hero would fail at the box office after the studio head approached her. She was proven right. 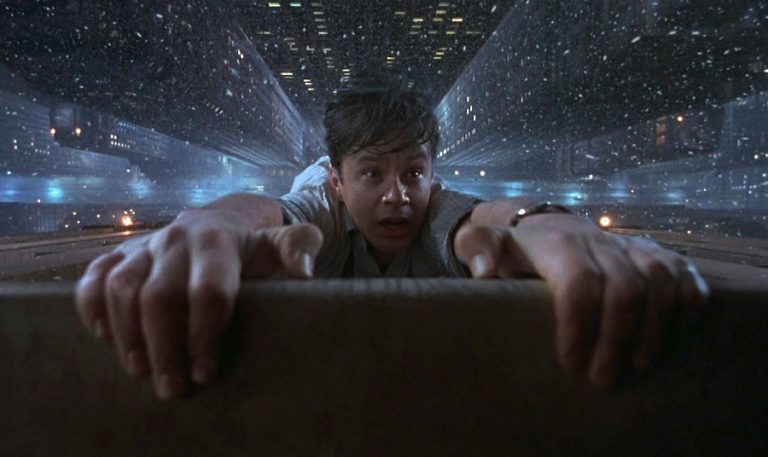 After their CEO commits suicide, a successful company decides to hire an idiot for CEO to depress the stock and cause panic in the investors. They come up with eccentric yet clumsy Norville Barnes (Tim Robbins) when he destroys executive Sidney Mussburger’s office (Paul Newman).

The Hudsucker Proxy was a dream project for the Coen brothers for years and years. Originally written with Sam Raimi in the 1980’s, it became the highest budgeted Coen brothers film to date. After getting Oscar nominated for Barton Fink (1991), Joel Silver gave them creative control to make whatever film they saw fit.

This became the most expensive Coen brothers’ movie to date. Unlike the modest locations of their previous films, Proxy takes place mostly on huge sets. Aside from screenwriting duties, Raimi also serves as the second unit director here. It was their first movie to require a second unit director. On top of that, it became one of their first movie with an abundance of big name stars. For their lead, love interest, and antagonist, they chose Tim Robbins, Jennifer Jason Leigh, and Paul Newman. The Coen brothers describe it as a pretty overwhelming experience.

When the film first came out, it had poor box office and incredibly mixed reception. Due to the high budget of 25 million, they decided to make their next film the relatively low budgeted Fargo (1996).

Unlike the Sturges films, neither Hero or The Hudsucker Proxy are seen as modern classics. The difficulty with both movies is that their various influences seem to clash with each other.

While Frears is not a bad director, his style feels a little too lethargic and realistic for the script of Hero. The movie also does not seem to have much conviction in its hero being an asshole. The film constantly undercuts LaPlante’s bad behavior. Sure, he might not be a very nice person, but he has a son he really cares about. Probably the most prominent example of this comes in a little tick that LaPlante: cursing and then saying, “pardon the vulgarity.” All of these traits soften LaPlante into a more palatable scumbag.

With Hudsucker Proxy, Raimi and the Coens take influence from both Frank Capra and Sturges. As a director, Sturges became known as a sort of “anti-Capra.” While Capra made sentimental movies, Sturges’ films took a more ironic approach. Capra’s heroes succeeded through integrity and human decency. Sturges’ heroes often succeeded through dumb luck and cleverness.

The Coen brothers set The Hudsucker Proxy in a specific unreality inspired by the movies. It’s the sort of world where characters experience massive successes and failures in business over the course of a month. Although set in the 1958, television does not seem like it exists in this universe.

The Hudsucker Proxy announces itself as a story at the beginning by having a narrator describe the world. It goes on to have the audience view Norville from a distance. We see him through the eyes of the narrator, strangers, Newsreels, and film strips. Norville rarely has a private moment and when he does, it happens in a very public location. When the audience watches Norville’s story, they are watching him as a movie character rather than getting involved in his story.

In Hero, everybody manipulates everybody. Television is everywhere. The news media influences how the world sees the characters. The heroic Bubber is entirely created through the press’s eye. The film introduces Gale Gayley in the middle of a newscast. Gayley also has a camera man who constantly praises his own work. LaPlante makes a dishonest living selling (among other things) faulty televisions. All three characters spend a lot of time crafting their image to the public.

One of the reasons that Sturges has had such an influence on filmmakers comes from television. In 1958, Universal’s forebear MCA bought Paramount’s large vault of pre-1950 movies. This included Sturges’ oeuvre. They proceeded to broadcast it on television, where people like the Coen brothers and David Webb Peoples saw them. With this new innovation, Sturges became a lasting presence in American cinema.